Swindon already know they'll be playing League Two football next season with Wigan narrowly avoiding the drop. When they lock horns though league positions will not mean anything and either team could win. Who will? Find out with our Wigan vs Swindon match preview with free tips, predictions and odds mentioned along the way.

This game is a tough one to make a prediction for with Wigan safe and the bottom four already confirmed. Swindon are one of the sides heading down. Will those factors change how the game unfolds? We say not and back Wigan to collect another three points as they aim to finish the season strongly. Yes, Wigan lost last time out but it was against Hull; prior to that they'd won five and drawn one of their last six. Swindon have just been poor; they've lost seven of their last eight.

The first prediction we've made references a woeful run of Swindon form. That doesn't mean they can't score goals though. In their last five away from home four have ended with Swindon scoring just a solitary goal. Wigan have conceded one in three of their last five at home. As tips for total team goals go, this one comes pretty well backed up by by statistics.

Wigan to net at least twice

So far in our predictions we've backed Wigan to win and Swindon to score once. Here we say Wigan will net at least twice. They've managed to achieve that feat in four of their last six matches. Swindon have shipped two or more goals in seven of their last 10 away games including in their last four games.

Swindon to lose one more time before landing in League Two

Swindon and Wigan have been embroiled in a relegation scrap most of this season. Wigan well and truly won that war; they stayed up as Swindon slipped into League Two. This game might not mean much but it is one last chance for Swindon to gain a little bit of pride back. Whether they can manage to or not remains to be seen.

Wigan vs Swindon: A brief FAQ 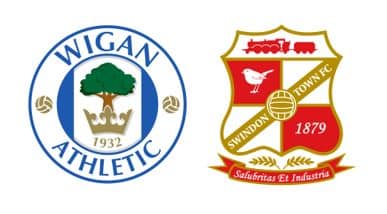