Wigan and Sunderland, two former Premier League teams, will meet once again in League One. Our preview of this match can help you make an informed bet, so keep reading and take a look at our betting tips.

Free betting advice, tips and predictions for Wigan vs Sunderland

The two teams are entering this game in completely different positions in the league, but that doesn't have to mean anything. So, here are our free League One betting tips and predictions for Wigan vs Sunderland.

Odds are subject to change at any time, so check the odds before you make your bet. Our recommended bookmaker for this match is Ladbrokes.

Sunderland has one of the best defences in League One and they are the team that has conceded the least goals in the league (31 goals in 39 games). Of course, they concede more in away games, exactly one goal per game, but Wigan is not that efficient at home since they score just 0.95 goals per match. All of this points to a low-scoring game, so bet on under 2.5 total goals.

In line with our previous prediction is our tip of at least one team not scoring. Our expectation is that Wigan will fail to score in this match, for the reasons mentioned above. In addition to this, Sunderland has kept a clean sheet in 46% of their games, which is the second-best result in the league.

The best odds and stats for Wigan vs Sunderland

If you want to bet on the best odds, take a look at our selection of odds from top UK bookies:

Wigan vs Sunderland preview – Can the guests keep their form?

After their win against Doncaster in the last round, Wigan is in a bit better position at the moment. However, they are still in the relegation zone and in serious danger of spending their next season in League Two. In the last five games, Wigan has three losses, so they are not in the best form, but the convincing win this weekend gives them a reason to be optimistic for their chances of survival. That being said, Wigan is struggling with injuries at the moment, with Wootton, Lang, Massey, Pearce, Merrie, and Joseph out or under question for the upcoming match.

Despite their loss to Charlton in the last round of League One, Sunderland is actually in great form. After all, that loss is their only one in the last ten league games, in which they've collected six wins and managed to climb to 3rd place. The team is currently five points behind Peterborough with one less game played and a push in the rest of the season could see them climb up to secure direct promotion to the Championship. Wright, Flanagan, Vokins and Willis are questionable for the game due to injuries.

FAQ for Wigan vs Sunderland 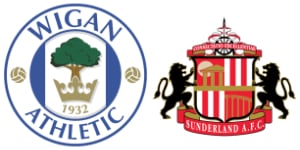