Three points won't change Crewe's season. For Wigan though it could be enormous. Who will get the win this weekend? Find out with our Wigan vs Crewe match preview with free tips, predictions and odds mentioned along the way.

Wigan vs Crewe: Our trio of predictions

Wigan have recorded back to back wins to give their survival hopes a real boost of late with their win over Sunderland on Tuesday an exceptional result. Crewe, however, had a decent result of their own last time out holding Portsmouth to a 0-0 draw; it was much needed after their 6-0 defeat to Oxford. The home side need the points more than Crewe but the visitors have won their last two on the road and won't want to go another match without victory. For Wigan, they will want to win but may settle for a draw to keep their momentum ticking along with very winnable games up next in Shrewsbury and Burton. Given Wigan and Crewe share identical form over the last five matches, we think it may well play out in a draw too.

We've touched on the form of both sides in our opening prediction; now we turn our attention to the form of their goal scoring and defensive prowess. Over the last 10 matches Wigan matches have averaged 2.2 goals; that's considerably lower that their season to date number of 2.8. Crewe sit bang on 2.5 across their past 10, however, hone in on their previous five away games and the number of goals drops to 2.2 per match.

A goal in the opening 45

Although we haven't made the prediction that there will be loads of goals, we don't expect things to be goalless at the break. A look at the recent form would suggest this bet makes sense too. Wigan's home matches have seen a goal inside the first 45 minutes in three of the past five. Then there is Crewe; only one of their previous five matches has been without a goal in the opening half of football. With the two locking horns, it's highly plausible we see the net bulge before the interval this time too.

Wigan vs Crewe: Every stat you need

Can Wigan take a huge step towards safety?

The relegation battle in League One is pretty intense at the moment with just five points separating bottom and Wigan, who are just outside the drop zone. A win would be a gigantic step for Wigan. Crewe are just coasting through to the season end now but their recent form shows they won't turn up and make it easy for their hosts.

FAQ for Wigan vs Crewe 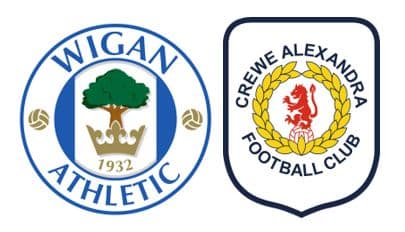