Bayern Munich have scored 11 goals in their last two games. Bundesliga champions in each of the last six seasons, they are back on top of the table, hitting form when it matters.

In the time since the first leg of their Champions League last-16 tie with Bayern, Liverpool have slipped from the top of the Premier League, owing to draws against Manchester United and Everton; fixtures in which a point away from home is never a travesty, but games that were there for the taking.

When the two sides reconvene at the Allianz Arena on Wednesday night, then, after a 0-0 first-leg stalemate, confidence and momentum are on Bayern's side, while there are suggestions that doubts are creeping in among Jürgen Klopp's Reds.

There are few teams in Europe as perfectly suited to swinging this evenly balanced tie in their favour as Liverpool, though. Despite their recent form, Bayern, more so now than has been the case at any point in the last half a decade, have serious weaknesses. And those weaknesses happen to align pleasingly with Liverpool's strengths.

This is a Bayern side in transition, moving away from the dependence on the ageing stars likes of Franck Ribéry, Arjen Robben and Thomas Müller and towards a new era led by Leon Goretzka (24), Kingsley Koman (22) and Serge Gnabry (23).

With the stalwarts of the flanks, though still wily operators, seeing their abilities corroded by time, and as the new breed, while promising, yet to attain the levels of their predecessors at their peak, Bayern have become vulnerable out wide.

In an attacking sense, the wings are still Bayern's primary avenue to success, but it is when possession is lost that their weaknesses out wide are revealed. The old heads no longer have the speed to recover, the young replacements lack the tactical understanding of how to protect the space in behind them and there is a lack of athleticism in central midfield which renders the covering players unable to fill in ably.

In David Alaba and Joshua Kimmich, Bayern possess two of the finest full-backs in Europe. But they are being increasingly leaned on in attack – Kimmich is tied with Borussia Dortmund and England prodigy Jadon Sancho as the Bundesliga's assist leader with ten – and as such can be caught upfield in transition.

Although the goals they have conceded of late have been rendered consolation efforts by the amount they have scored at the other end, domestic opponents have had success when attacking quickly into the spaces behind Alaba and particularly Kimmich.

The below screenshots from recent games depict three such examples. All of which saw Bayern's opponents work the ball in behind the full-backs, and all led to goals. 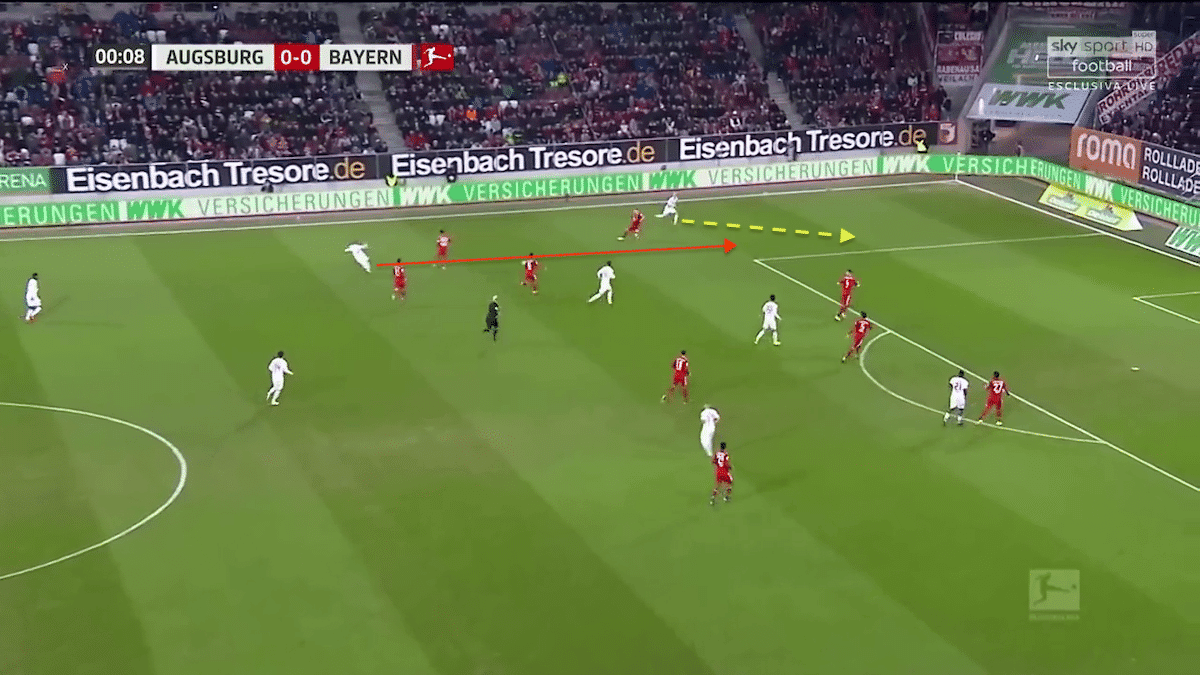 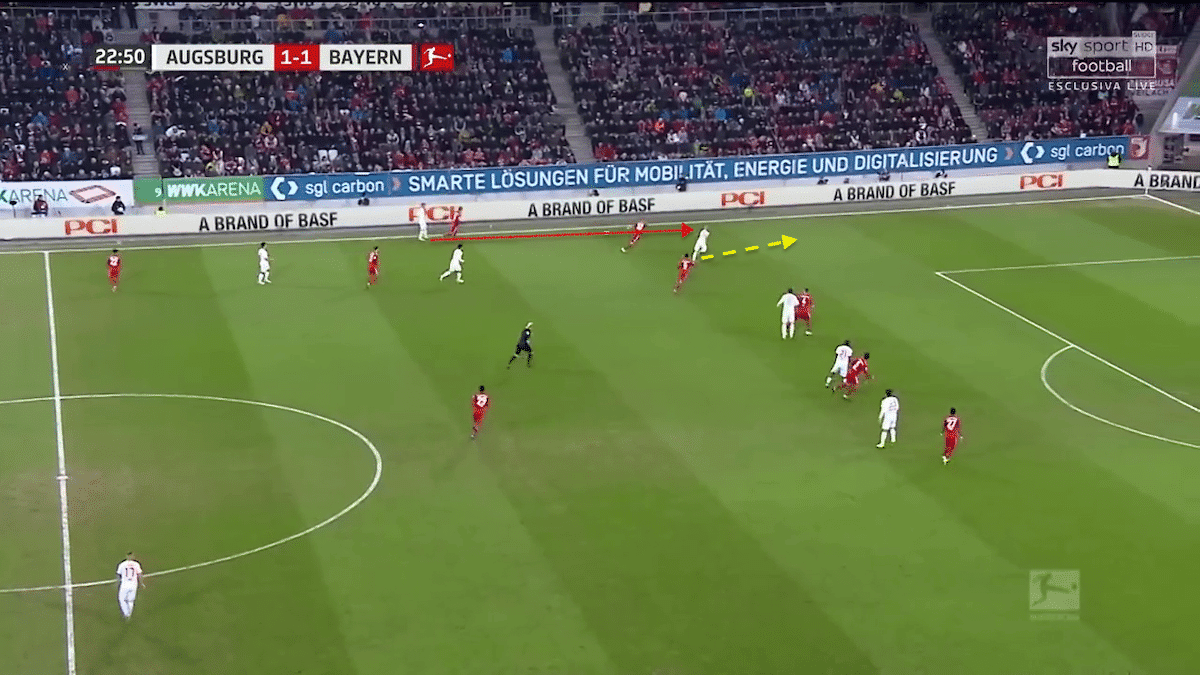 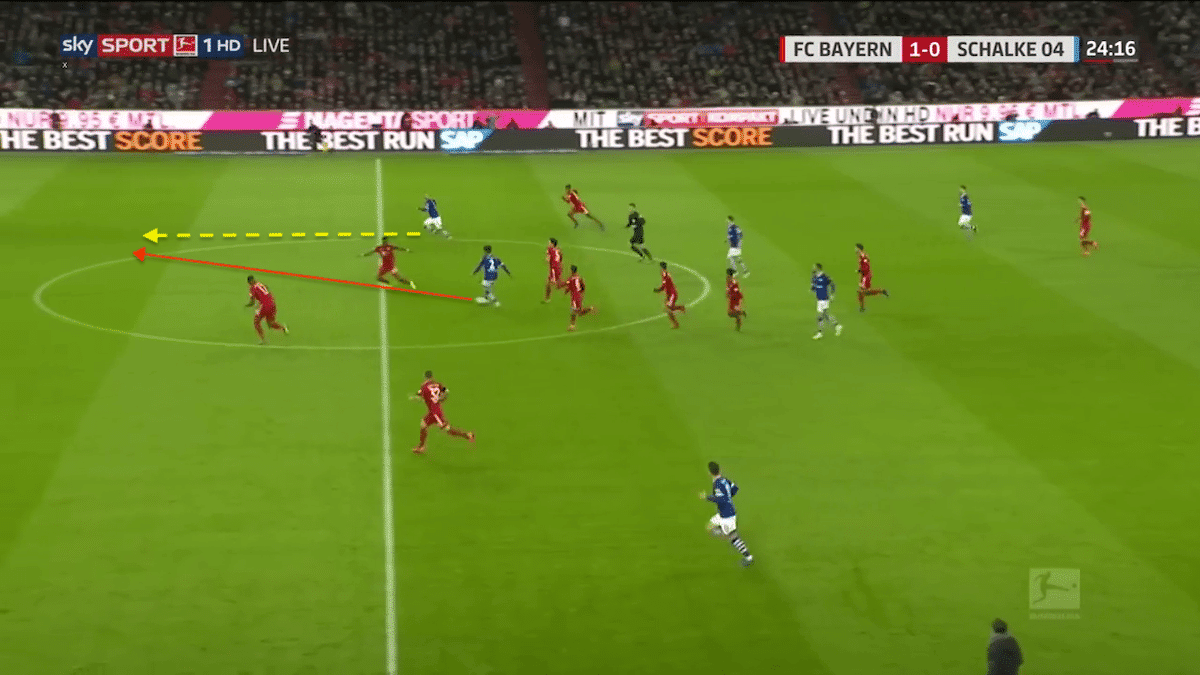 This plays perfectly into Liverpool's hands. The Reds have the defensive structure to sit deep and contain their hosts, while Sadio Mané and Mohamed Salah provide an abundance of pace and technical ability out wide.

If they can remain disciplined out of possession, Mané and Salah will be coiled and ready to spring forward on the counter. And, far from mere speed merchants, the pair have the intelligence of movement and creative skill to maximise such scenarios.

Having shut out the Bavarian giants at Anfield three weeks ago, Liverpool's hopes rest on their ability to once again keep Bayern's attack relatively quiet. That will require paying close attention to Robert Lewandowski.

Lewandowski has hit stride in recent weeks, hitting four goals in his last two games, with his brace in Saturday's 6-0 demolition of Wolfsburg making him the highest-scoring foreigner in Bundesliga history. But this has been far from a vintage campaign for the 30-year-old.

With 17 goals in the German top flight this term, he is once again on course to finish as the division's top marksmen. But the 14 open-play goals he has scored have come from chances worth an open-play expected goals (xG) value of 17.71. For contact, last season he scored 23 open-play goals from an xG of 21.72. Rightfully regarded as one of Europe's deadliest finishers, Lewandowski has been markedly less precise in 2018//19.

Of course, having worked with the player at Dortmund, Lewandowski is someone Klopp knows well, and the German tactician managed to drill his makeshift backline well enough to prevent the Polish international scoring at Anfield, despite the absence through suspension of Virgil van Dijk.

Lewandowski may have rediscovered his scoring touch of late, but Van Dijk will be present in close proximity to the Bayern No.9 at the Allianz Arena. The Dutchman is arguably the best centre-back in the world and present and, with his anticipation, pace and flawless timing, there will be a wall parked before the Liverpool goal that even a striker of Lewandowski's calibre will find it difficult to penetrate.

Striking the right balance between caution and adventure will be key for Liverpool. Bayern, in current form, certainly command respect, but they should not be feared.