With the Citizens leading the title race by eight points, undefeated and thrilling with their inventive attacking football, United will be desperate to claw back some ground on Pep Guardiola's side.

There is the possibility that both teams will be without arguably their best players for the encounter: United's French superstar Paul Pogba is suspended following last weekend's red card against Arsenal, and David Silva is reportedly an injury doubt for the game.

Without those key players, both sides will be weakened centrally, but it is in the wide areas that they remain most dangerous. Winning the battle for superiority down the flanks will go a long way to securing three points at Old Trafford.

City and United are both blessed with a handful of vibrant, pacy, young, creative players who occupy the wings in their respective systems, with some among the Premier League's standout performers so far this term.

For United, Anthony Martial has rediscovered his best form after an indifferent second campaign in Manchester. The Frenchman has been rotating with the ever-impressive Marcus Rashford in the left-wing berth, while Jesse Lingard has recently established himself as a key player in Mourinho's side.

Over at the Etihad, Raheem Sterling looks a player transformed, already having reached his highest ever single-season goals return and bailing out Guardiola's men with late goals on multiple occasions. Across, from him, Leroy Sané has been as direct and dynamic as ever.

Guardiola's City are becoming revered for their ability to dominate possession and pass opponents into submission, just as the Catalan tactician's Barcelona and Bayern Munich side's were.

But it is in the wide areas that City do their best work, expertly manufacturing situations from which they can reach the byline before playing high-percentage cut-backs into the centre, begging for the likes of Sergio Agüero and Gabriel Jesus to dispatch.

Key to this is Sterling and Sane's searing pace and intelligent identification of space. The wide pair have become consistent and productive in their ability to gauge their side's pattern of play in order to time runs in behind the opposition's backline.

Their constantly improving instincts are seeing them grab a yard's head start on their markers, and once they are in full flight, there's no catching them.

Both Sterling and Sané have become devastating in the half-space – the gap between an opponent's centre-back and full-back on either side – tearing into the dangerous zone to either create gilt-edged chances for colleagues or score themselves.

Indeed, they have a staggering combined tally of 15 goals and eight assists already this term. 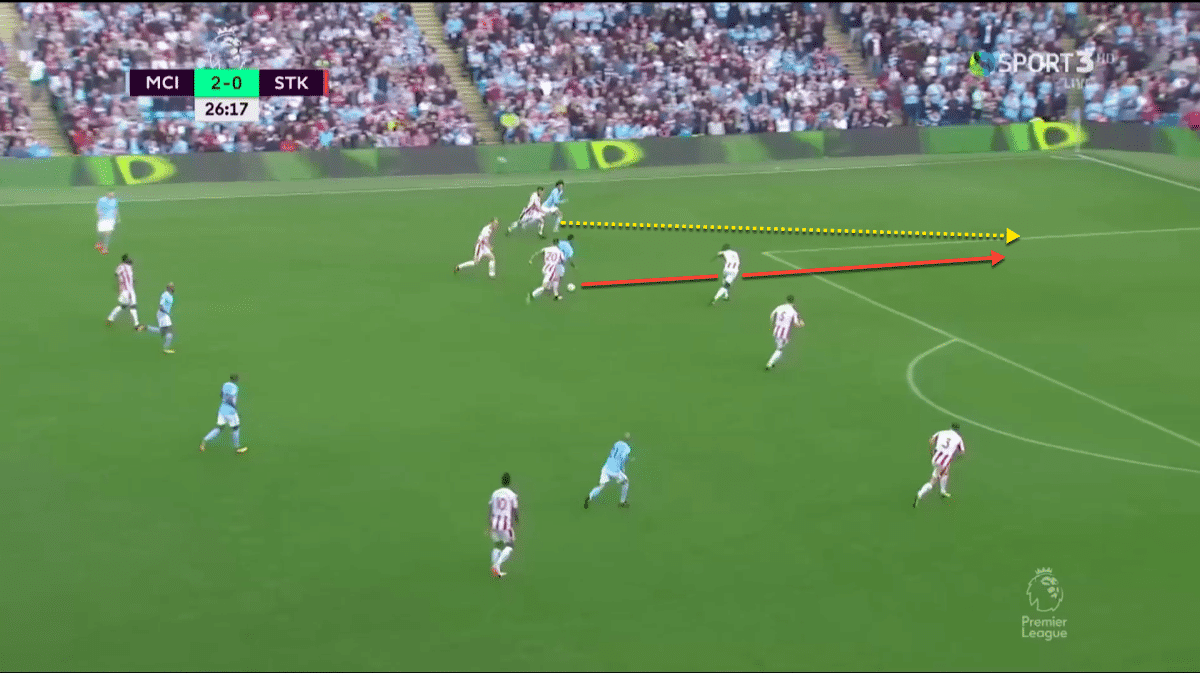 In the above image, taken from a recent victory over Stoke City at the Etihad, we see Sané perfectly timing a run into the inside-left zone when he sees that Agüero has held up the ball and is looking for a pass. 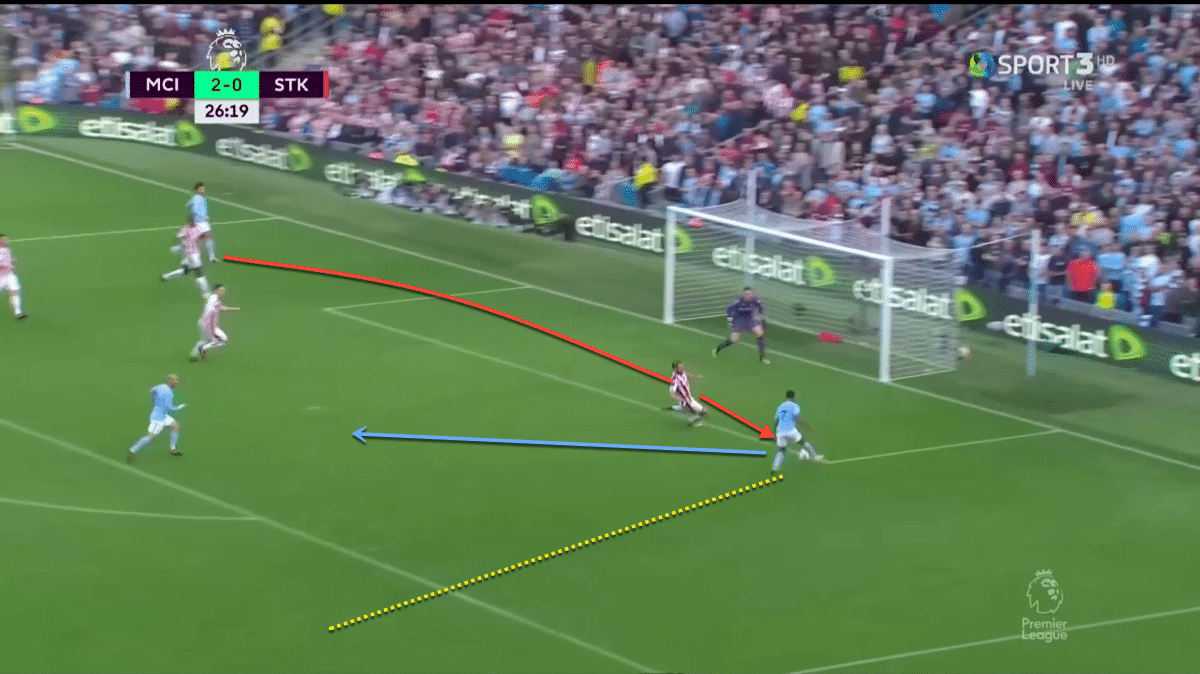 Sané then whips an inviting low ball across the front of the six-yard box, picking out Sterling at the far post. Rather than shoot for goal himself, which would have required a relatively difficult first-time strike from a less-than-perfect angle, the England forward beautifully and unselfishly pops a delicate pass into the path of Silva, who side-foots home confidently.

If City are able to create similar scenarios at Old Trafford, the United defence will be in for a very busy afternoon.

Few players inspire debate among fans quite as much as Lingard: the England international midfielder has more than his fair share of critics. Yet, the one man whose opinion matters most, Mourinho, appears to be a fan.

The Portuguese boss has been utilising a three-at-the-back formation of late in which Lingard has been playing a key role. The versatile Warrington-born player's ability to play in either a midfield three or further forward in attack allows United to morph between 3-5-2 and 3-4-2-1 depending on the phase of play.

Although he is not the most technically gifted or creative member of the Red Devils' squad, Lingard is reliable, consistent, hard-working and seems to relish the big games.

His ability to press from the front unsettles defenders, and his knack for linking with attacking colleagues and breaking beyond the ball at the right moment is becoming a real asset for United. 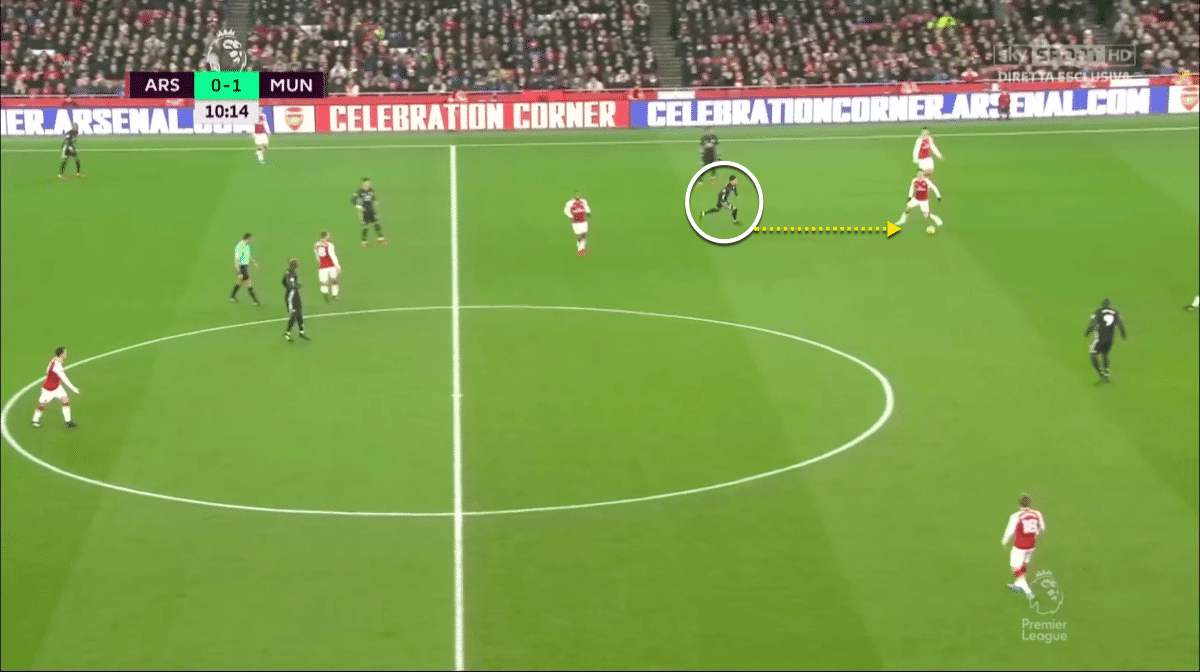 The above image, taken from last weekend's 3-1 victory over Arsenal at the Emirates, shows Lingard at the forefront of United's pressing efforts, putting pressure on the Gunners defenders in possession. 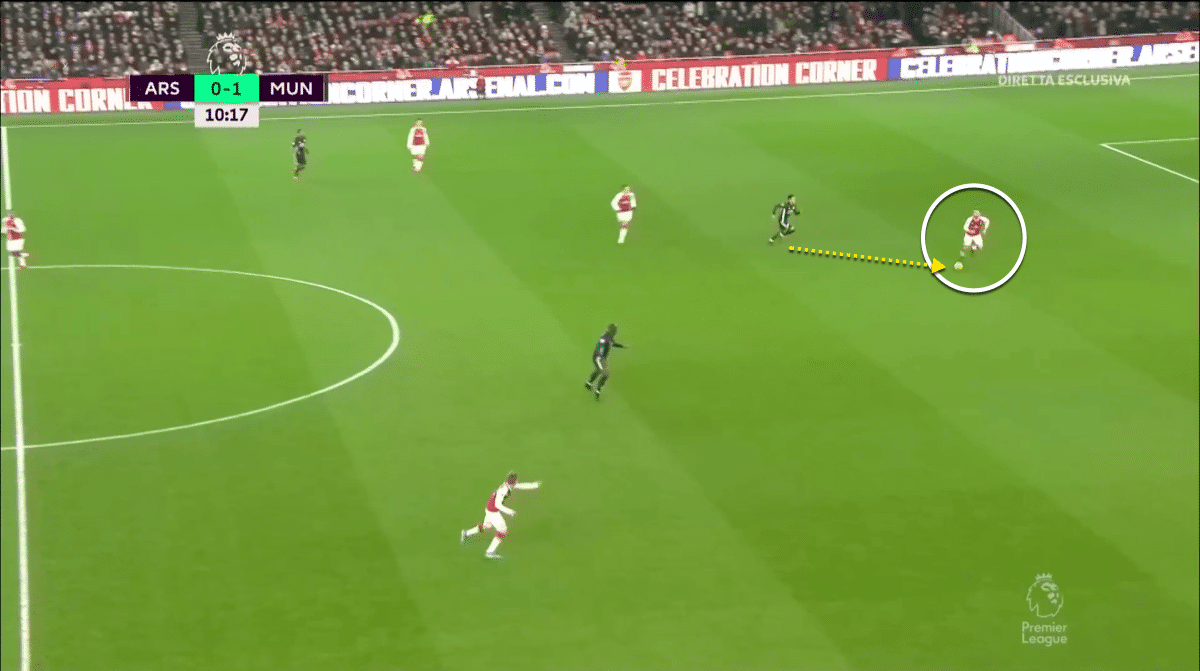 As Laurent Koscielny plays the ball back to Shkodran Mustafi, Lingard relentlessly continues to press, forcing the German centre-back to cough up possession. 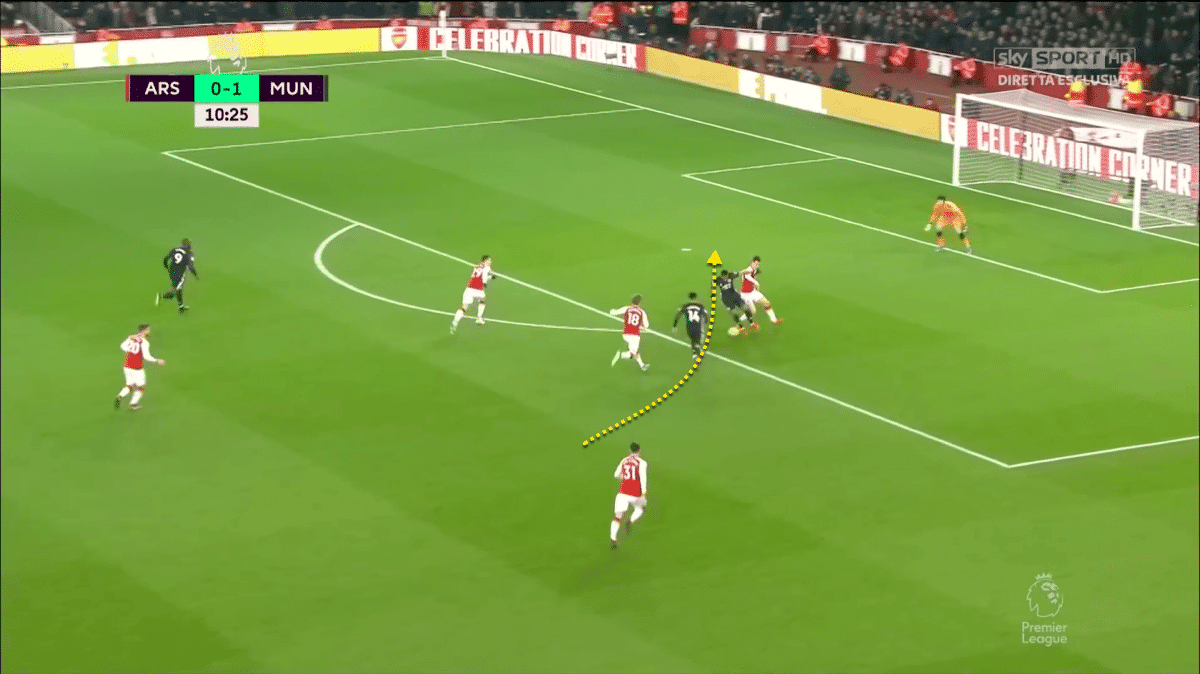 Then, a quick link-up between Romelu Lukaku and Martial allows Lingard to break forward. With the Frenchman inside the penalty area with his back to goal, Lingard recognises that a run to the inside of Martial will not only see him through on goal but prevent the recovering defender from making a challenge. From there, he finishes neatly in off the post.

Lingard seems almost certain to start against City, and his ability to move beyond the ball into the channels cannot be underestimated.

On the left, Mourinho will choose between Rashford and Martial. In recent weeks the former Monaco star appears to have pulled away from the 20-year-old Englishman in the pecking order.

Where most of Lingard's best work is done off the ball, Martial is at his most dangerous when in possession. The Red Devils will attempt to work the ball wide to the 22-year-old, aiming to isolate the gifted dribbler with his marker in one-on-one situations.

It may well be Agüero or Lukaku who grab the headlines with crucial goals, or, as was the case against Arsenal, another superlative display from United goalkeeper David de Gea could see the Spaniard's name up in lights once more.

There will be so much talent in every area of the pitch at Old Trafford on Sunday that it is difficult to predict exactly how proceedings will play out.

But it seems highly likely the key battles will be fought in the wide areas, where both sides are stacked with players capable of hurting the opposition in a multitude of ways.