Jermain Defoe is back in fashion. First Gareth Southgate recalled the Sunderland striker into the England squad after a three-year absence and now West Ham United are keen to re-sign him after 13 years away.

The Hammers were even prepared to spend big money bringing the 34-year-old striker back during the January transfer window but Sunderland, wisely, quashed any talk of a potential switch with their survival hopes hinging on the forward's form.

However, Defoe now holds all the cards. He is still under contract until next summer but if the Black Cats are relegated – and that looks a strong possibility at the moment – there will be pressure on manager David Moyes to offload the club's highest earner. Some sources are reporting Sunderland would allow him to leave on a free transfer.

Here we look at why Defoe is a no-brainer for West Ham, even at 34…

West Ham's issues in the striker department have been well documented. The Hammers went big in the transfer market last summer, signing Simone Zaza on loan from Juventus with the option to buy and splashing £20million on Swansea City's Andrew Ayew. They also had one eye on the future, snaring Manchester United's Ashley Fletcher, Jonathan Calleri on loan from Deportivo Maldonado and Toni Martinez from Valencia.

Between them, those five additions have scored five goals. Ayew leads the way with four from seven Premier League starts, though it is worth noting the Ghanaian forward has predominantly been used in one of the three attacking midfield roles behind the main striker.

Youngster Calleri – who is yet to start a league fixture – has one goal from 12 substitute outings. Italian international Zaza saw his loan cut short before moving to Valencia  – where he has bagged two in seven starts – while Martinez is on loan at Oxford United.

At the same time as bringing in that quintet of forwards, West Ham loaned Enner Valencia to Everton and attempted to offload Diafra Sakho to West Bromwich Albion for £15million. The Sakho sale fell through but the Senegalese has scored just once this term and has not been since since November.

All that leaves Andy Carroll as the Hammers' most reliable source of goals. The targetman has featured the most frequently of all the players mentioned but, owing to his ongoing injury problems, has still only managed 12 Premier League starts. A return of six goals gives an indication of what the England international could do with a run of fitness but that is out of the question given his history. 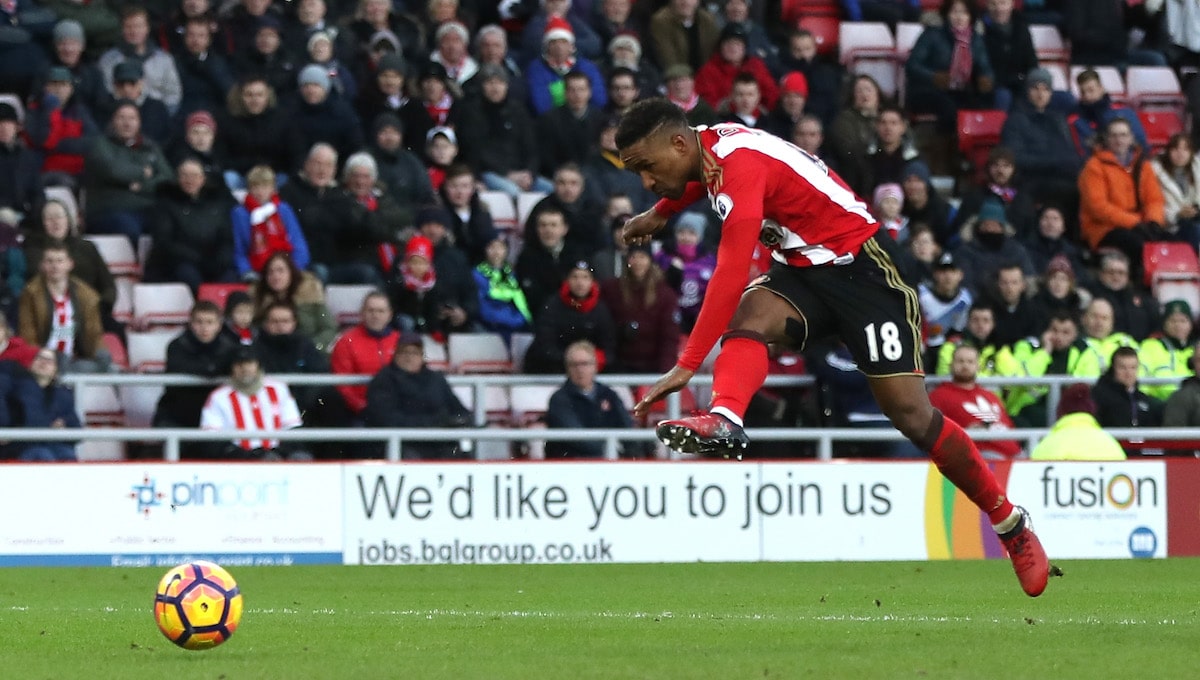 Enter Defoe. The Sunderland forward is the sole reason the Black Cats are not already a Championship side. With 14 Premier League goals from 28 starts he is the Wearsider's top scorer by some distance – Victor Anichebe is next with three goals – and has netted 60 per cent of all their goals in the league this season.

Since arriving at the Stadium of Light following a successful but tough period in MLS with Toronto, Defoe has bagged 33 goals in 75 league starts for the club, an almost one-in-two record despite 16th and 17th-place finishes in his two seasons at the club.

To provide further context of his importance to the Black Cats, Defoe is responsible for 38 per cent of the 85 league goals Sunderland have scored since his arrival.

Age is no factor for the Beckton-born hitman who will turn 35 in October. Described by Black Cats boss Moyes as “the fittest 34-year-old he's seen”, Defoe is teetotal and does all the right things to look after his body. He even celebrates his 150th Premier League goal with a cup of green tea.

“You do get more out of yourself if you don't drink,” Defoe told The Daily Mail. “At least when I finish playing I can say to myself, ‘You know what, I did everything right. I gave myself the best chance'.”

That aversion to alcohol saw him ask a waitress to ensure his sea bass came without white wine sauce when he ate out in Durham last year. An insight into how seriously he takes his fitness regime.

“She looked at me and probably thought, ‘What's wrong with a little bit of white wine? You're meant to be an adult'. But I said, ‘Please, just tell the chef no, please.'.

“And I do believe that if you look after yourself – don't drink, eat the right things and rest well – you feel ready for the game at the weekend.” 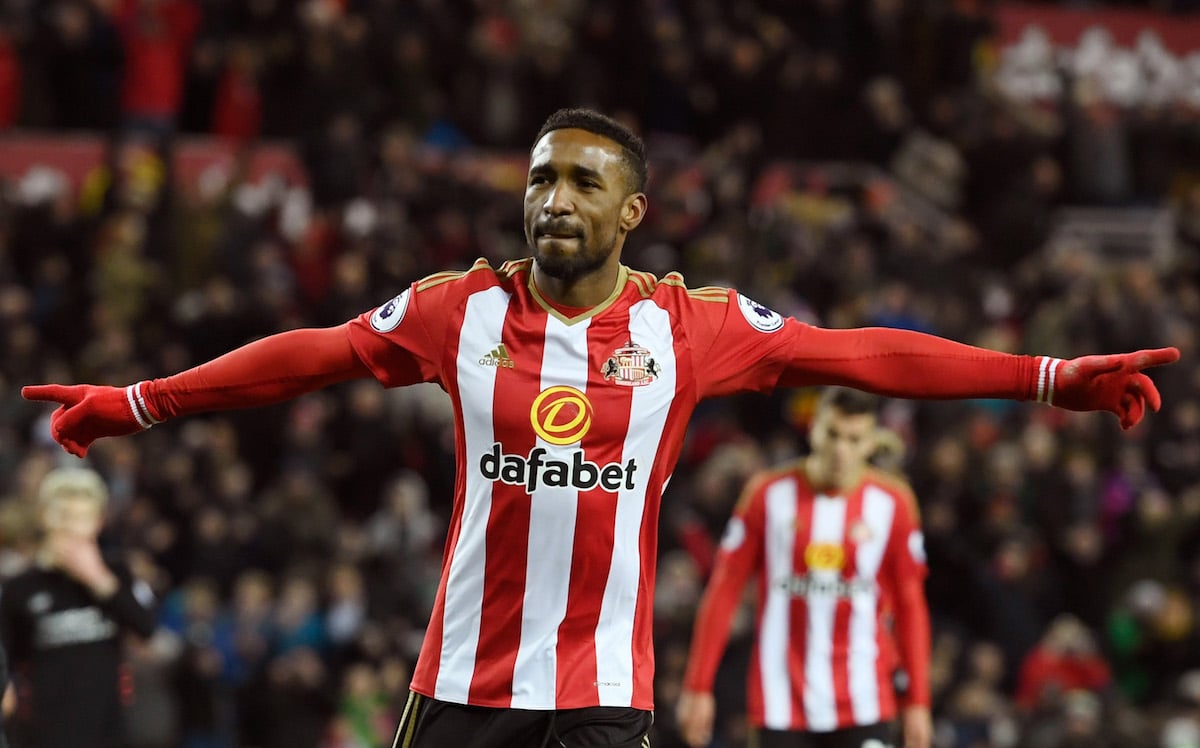 READ MORE: WHY SELLING ANDY CARROLL WOULD BE A MISTAKE

With a paltry 175 chances created in 28 Premier League games this season Sunderland are the second-least creative side in the top flight. Only north east rivals and fellow relegation fodder Middlesbrough have created few opportunities (170).

West Ham, on the other hand, have carved out the ninth-most chances with 284. If Defoe can score with the regularity he does for a chance-shy Sunderland he will have a field day with the Hammers.

Both sides play with one up front but for much of the season Defoe has had minimal support at Sunderland with Moyes preferring a flat 4-5-1 or 4-1-4-1 system. In recent weeks he has changed that to 4-3-3 with Adnan Januzaj and Anichebe flanking Defoe.

At West Ham, though, three are three supplementary forwards in support of the main striker. But if the Hammers were to re-sign Defoe it would give Bilić the option of playing with two up front and Defoe has always thrived alongside a big man such as Carroll.

It was alongside Peter Crouch that Defoe played some of the best football earlier in his career, thriving off the servicer the 6ft 7ins striker provided him with in and England, Tottenham Hotspur and Portsmouth.

Given the money West Ham have wasted in the transfer market in recent times the chance to sign a proven Premier League goalscorer for, at most, a nominal fee seems too good an opportunity to turn down.