With three goals in five days, each of them of great importance, Danny Welbeck has had one of the best weeks of his Arsenal career.

His double against Southampton last weekend turned a defeat into a win, and his goal in the Europa League against CSKA Moscow helped to steady a ship which was, if not sinking, taking on water.

With such an impressive impact – and he also scored a brace against Milan in March – it would be fair to wonder whether he deserves more playing time in the Premier League.

He’s only played 989 minutes, the equivalent of nearly 11 full games, but his return is decent.

It’s not a coincidence either; the rate at which Welbeck gets chances is in keeping with Lacazette and Pierre-Emerick Aubameyang too.

Competition for places: “It's nice”

Welbeck spoke about the competition with Arsenal’s other main forwards after the Southampton game, saying: “It’s nice. The competition for places gives you that added motivation to improve and better yourself.

“I’ve had it my whole career. It’s healthy but I know I can link up with plenty of players in this team.”

Link up is actually an area where Welbeck falls slightly behind his rivals for a spot, producing fewer than a third of the Expected Assists per 90 that Lacazette does (0.06 vs 0.2).

However, the area where he excels compared to his competition is the defensive side of the game. The Arsenal side remains fragile and porous out of possession, so perhaps they need forwards who do a bit more work going backwards.

It’s Lacazette again who is the most direct comparison, playing less of an out-and-out role than Aubameyang. Part of this may still be a difference in role, but Welbeck makes more than a whole extra defensive action per 90.

His 2.36 tackles and interceptions stacks up well against Lacazette’s 1.29, and far more than Aubameyang’s 0.72. 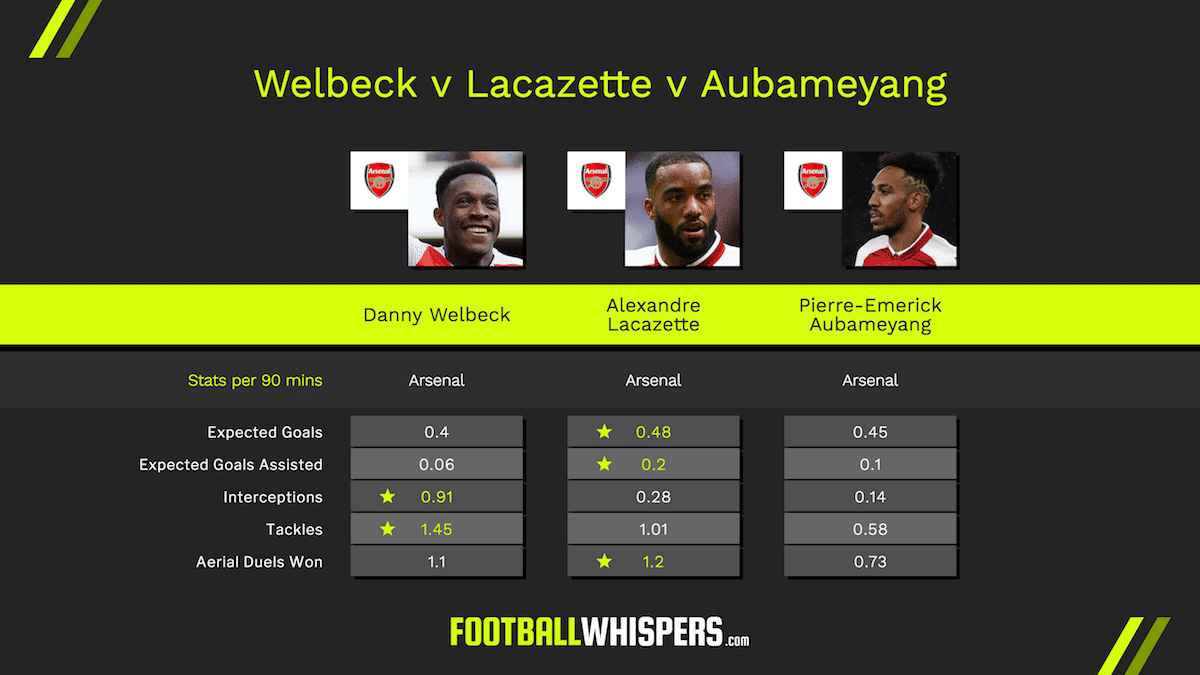 This work-rate is something Welbeck has always had, part of why his reputation is so high amongst Manchester United fans who were unimpressed to see him sold to a rival by Louis van Gaal.

Indeed, it’s something which Arsène Wenger alluded to after the CSKA Moscow game: “When you have your back to the wall, Danny looks like he has an extra-special motivation in his body and head to give you something.

“That is something really exceptional that you do not find it in many players.”

His 1.91 successful aerial duels per 90 is among the top 30 per cent of attackers in the league. He may not be Olivier Giroud, but if Arsenal need more of a direct route he could be a surprisingly good option.

It’s an awkward combination – aerial presence and defensive plug in the side’s attack. While his Expected Goals per 90 is similar to the other two forwards at the Emirates Stadium, Welbeck is also the only one whose xG value gets worse when taking into account shot placement.

A post-shot Expected Goals model looks only at on-target shots and factors in what part of the goal the ball was aimed at. If a player’s xG values are higher in the post-shot model than the normal model, then it’s likely that they’re a decent finisher.

For this season, both Lacazette and Aubameyang have had slightly higher values in the post-shot model than the normal one, while Welbeck’s is lower (0.35 vs 0.4 per 90, or 3.88 vs 4.43 overall).

Welbeck is well aware he has his critics but keeps things in perspective.

“In professional football, there are always going to be critics,” Welbeck said after the Southampton victory. “You see people are criticising Cristiano Ronaldo and he’s at the pinnacle. 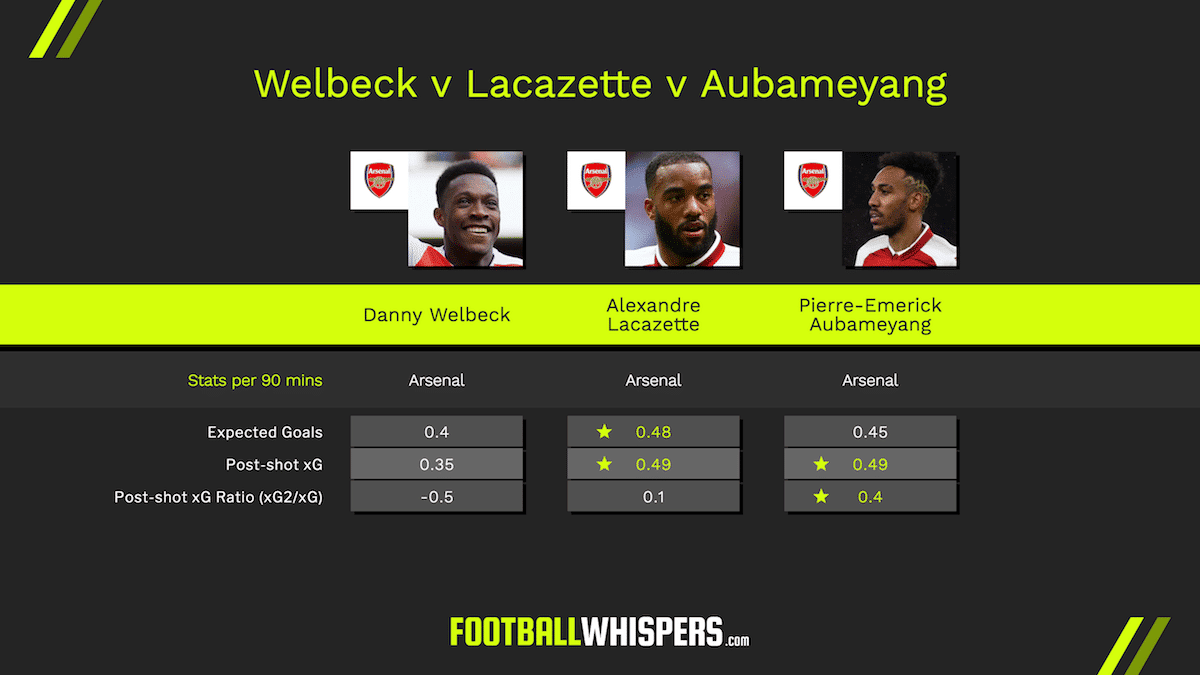 “Every day in every single walk of life, you can do something good and people will have something bad to say about you. You just get on with it and do your job as best you can.”

Whether the critics like it or not, the job that Welbeck is doing this season justifies more minutes, at least when Arsenal need something a little different.