Let's get it out in the open: Watford are going to get relegated this season.

It's easy to make sweeping, potentially reactionary, statements when you've been beaten 3-0 by a mediocre Manchester United team and failed to win in five.

But thanks to Football Whispers data, we can put a little more meat on the bones of a miserable season for the Hornets.

Nigel Pearson's appointment in mid-December initially saw Watford flicker into life. But it's been downhill since squandering the lead in consecutive games against Aston Villa and Everton at the start of the year.

What makes Watford's situation all the more frustrating is they are not completely hopeless. A run of six Premier League games without defeat – earning Pearson a Manager of the Month nomination in the process – proved as much.

Their underlying numbers suggest it too. Watford's open-play expected goals (xG) total for the season is 28.44 – which ranks 14th in the Premier League. Yet across four managers – Javi Gracia, Quique Sánchez Flores, interim Hayden Mullins and now Pearson – they have found the back of the net just 20 times from open play. That's level with Crystal Palace as the joint-lowest in the top flight.

Even their open-play expected goals against (xGA) total isn't too bad (38.74) – enough to rank 14th once more. An under-performance to the tune of 4.26 goals would have been a lot worse without A) The heroics of keeper Ben Foster and B) The 8-0 shellacking at the hands of Manchester City in September.

But the reason Watford will be playing Championship football next season is their lack of cutting edge in front of goal. Their problems are two-fold. Firstly, they do not shoot from good positions often enough. Secondly, they are too wasteful in front of goal when they do carve out decent openings.

We'll start with a team issue: shooting from high-value positions. The point of xG is it gives an indicator of the quality of a chance. It's not without its flaws, for example, it doesn't take into account who is shooting – i.e. all players are assumed to be equal. But if Watford had Sergio Agüero upfront rather than Andre Gray, we wouldn't be having this conversation.

Each open-play effort Watford have had this season is assigned a value based on factors including position, distance to goal and shot type. What we can take from the Hornets' xG map for this season is they are not having many high-quality efforts – the darker the marker, the better the chance. 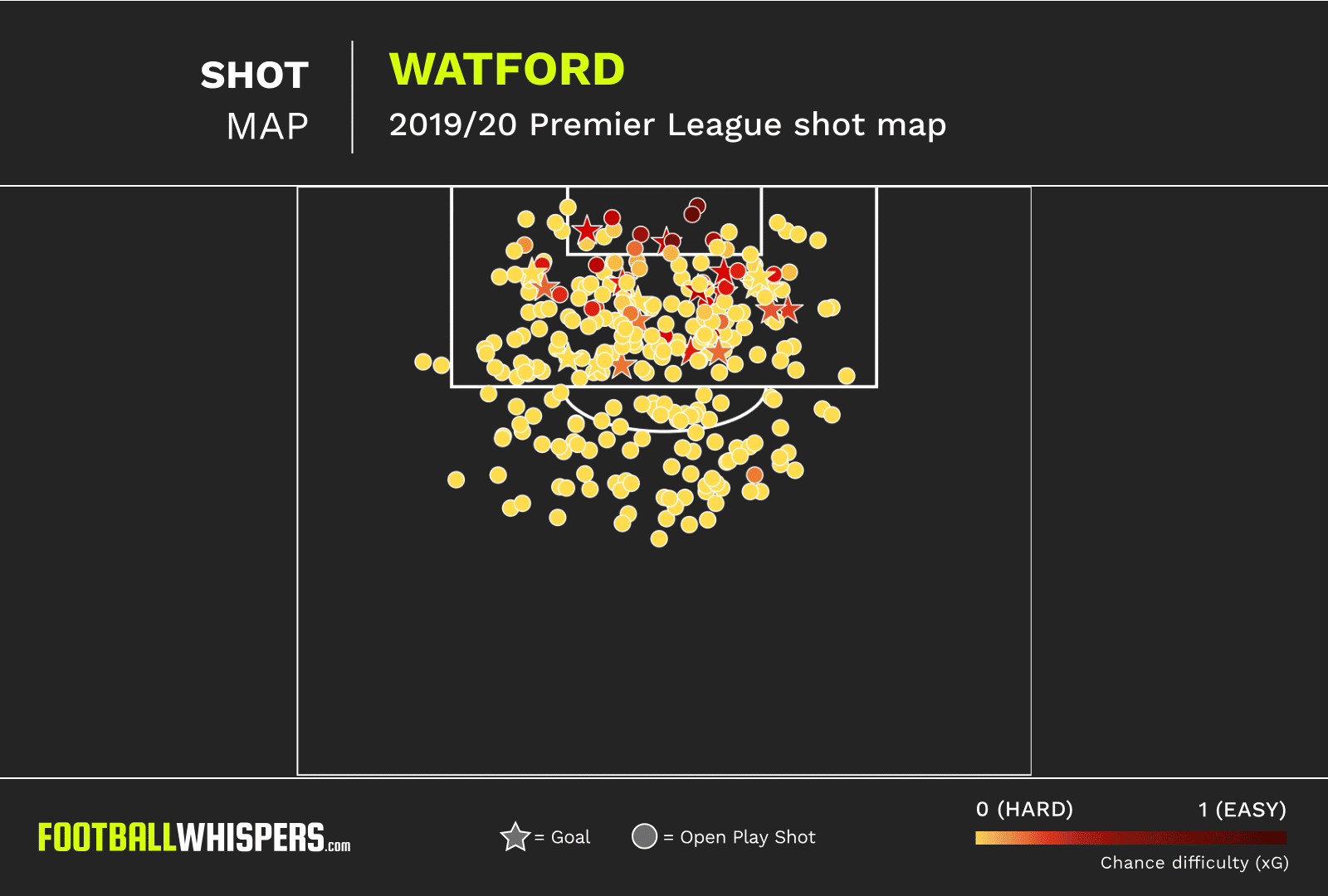 But the issue doesn't stop there. When Watford do get into good positions – or at least positions – from which to shoot, they are proving incredibly wasteful. The post-shot xG metric looks only at on-target efforts and measures where on goal they are bound for, again assigning a value based on the probability of the shot going in.

Watford's post-shot xG, however, is the second-worst in the entire Premier League at 21.54. That's 6.46 goals fewer than their overall xG, which means the Hornets' forwards are decreasing the value of the chances they have with poor finishing. Only Crystal Palace have a lower post-shot xG with 18.1. But their total open-play xG is 22.92 meaning a drop-off of 4.82.

So, who are the culprits? Everyone – except Troy Deeney. The Hornets skipper is the only forward at the club to have added value to his efforts this season. Deeney's post-shot xG is 4.7 against an open-play xG of 3.65, but he has scored three times from open play and twice from the penalty spot.

Taking the four forwards who have accumulated the most minutes this season, everyone else has lowered the quality of the shots they've had with bad finishing. 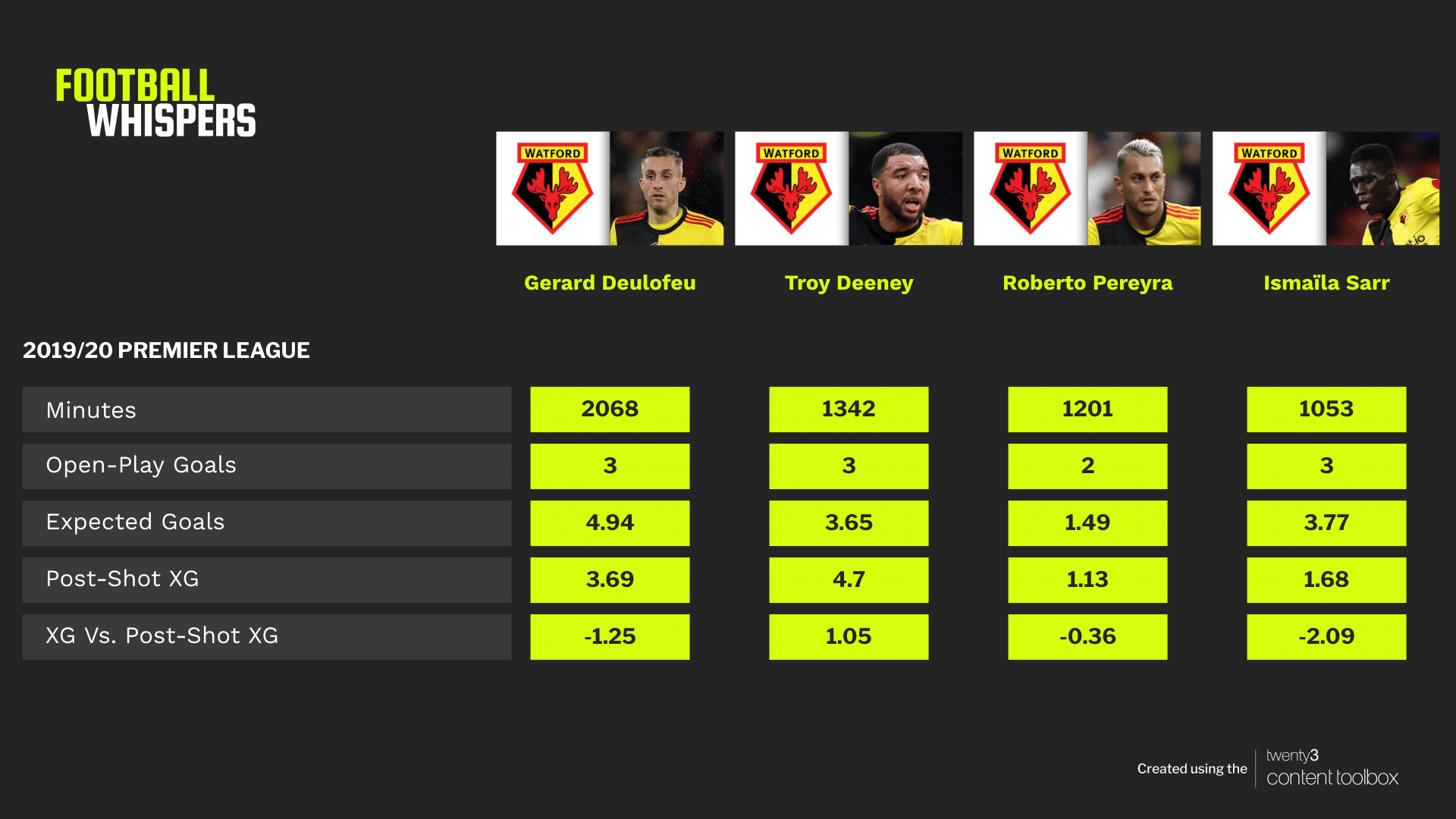 That said, only Roberto Pereyra, with three open-play goals against an open-play xG of 1.49 has actually bettered his expected figures for the season so far. That's because both of the Argentine's non-penalty goals this season (at Bournemouth and at home to Everton) were worth less than 0.5 each in xG terms.

We can get a better idea of why Watford's finishing has been so poor this season by looking at their shot placement map for 2019/20 (below). This diagram shows where shots are placed in the goal and how many result in goals. 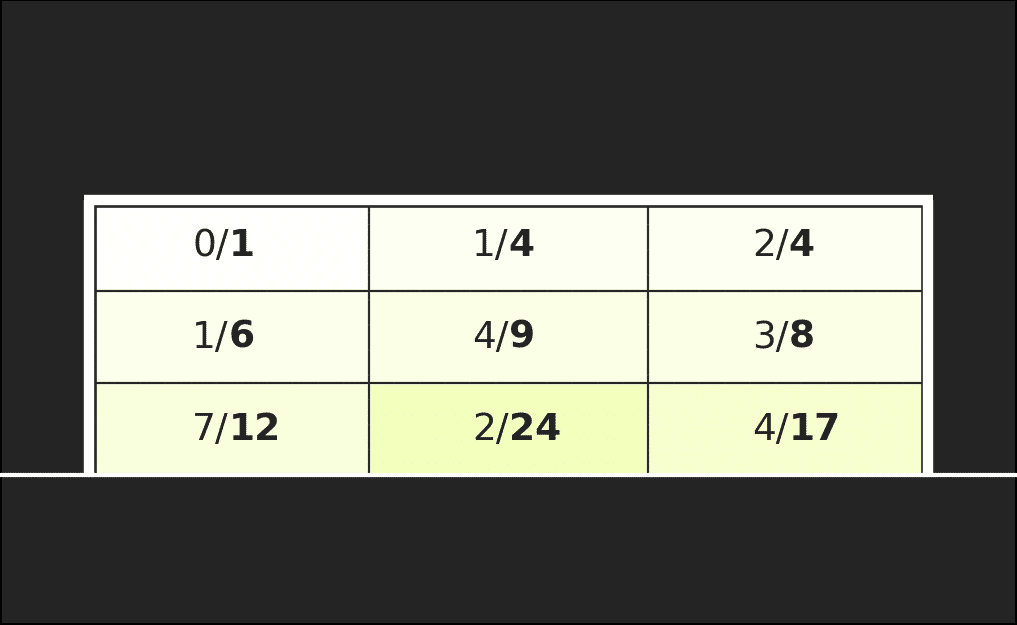 The corners of the goal are the areas most likely to result in success but Watford have shot low and central more than anywhere else this season. Yet their conversion rate has been the worst – just 8.33 per cent. Whereas when shooting for the bottom corners they have converted with 37.9 per cent of their efforts.

Despite their problems, there is reason for optimism at Vicarage Road. But time is running out.