Why Teams Persist With Playing Out From The Back.

During Chelsea’s 2-1 victory over Tottenham Hotspur on Saturday evening Glenn Hoddle, who was on commentary for the match, kicked the hornet's nest and implied playing the ball out from the back was risky and pointless. It’s a debate which seems to be continually stoked just as the flames are dying out every single month.

Hoddle’s remarks came after one of the Chelsea players lost the ball trying to pass the ball out from the back, the Spurs player who won the ball was then fouled and the away side had a free-kick in a dangerous area. Spurs flew out of the traps against Chelsea and looked to press high in an attempt to force Chelsea to go long because the chances are their two centre-backs would manage to win the ball against Diego Costa and Spurs could build yet another attack.

This happened early on in the match and Spurs, for the opening 10 minutes, had Chelsea hemmed in. They forced Chelsea to go long and the home side couldn’t find a rhythm centrally. Every move eventually broke down and going long was playing right into the hands of Pochettino and his players. 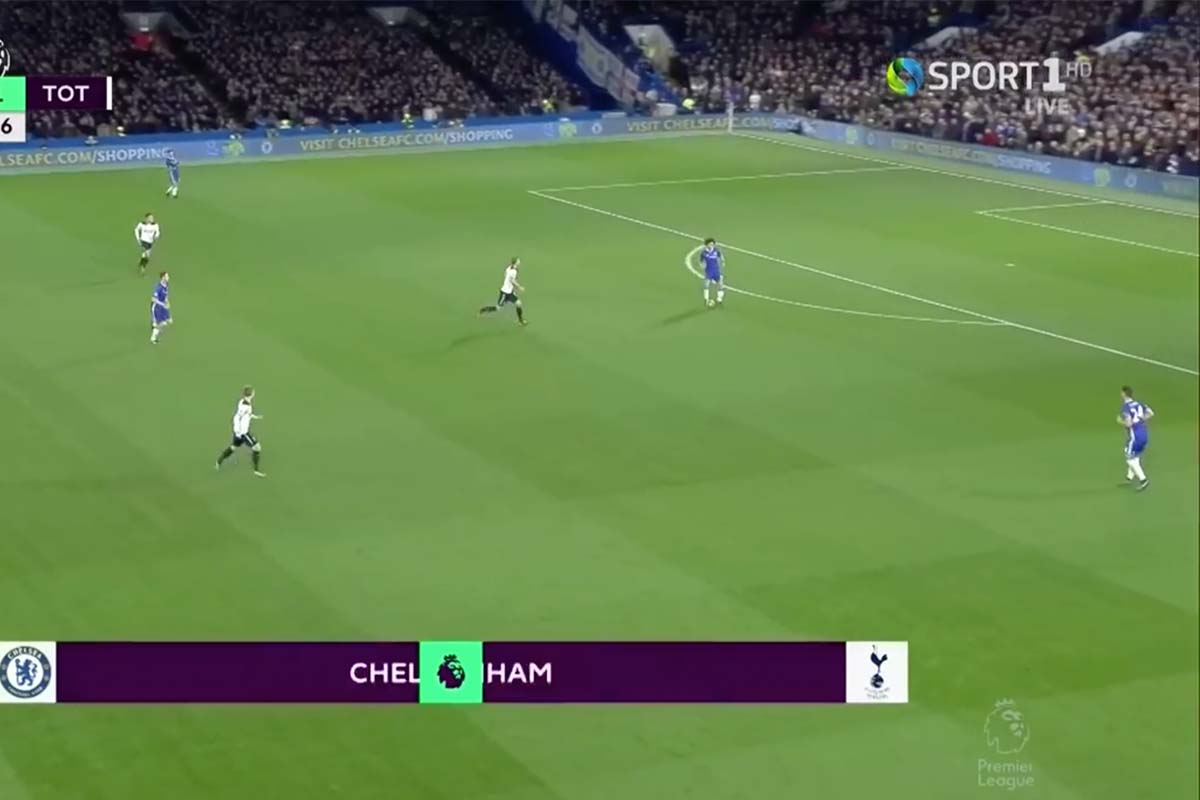 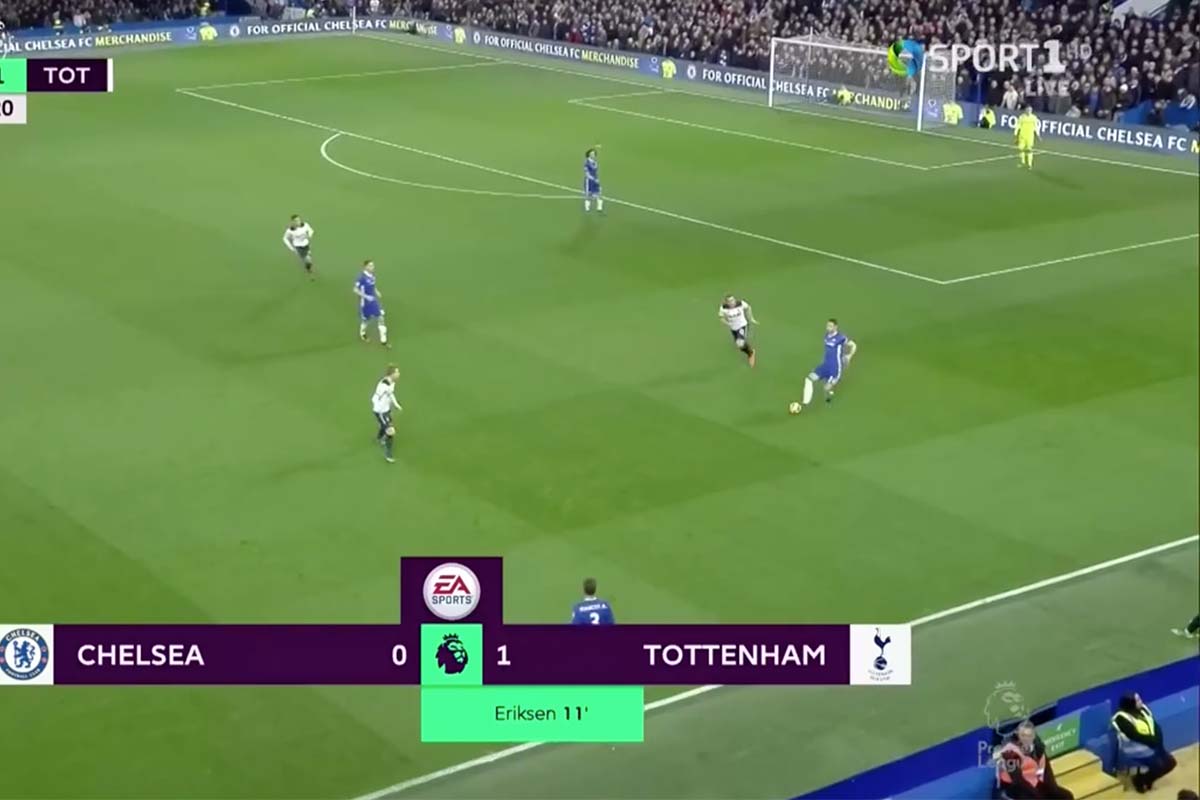 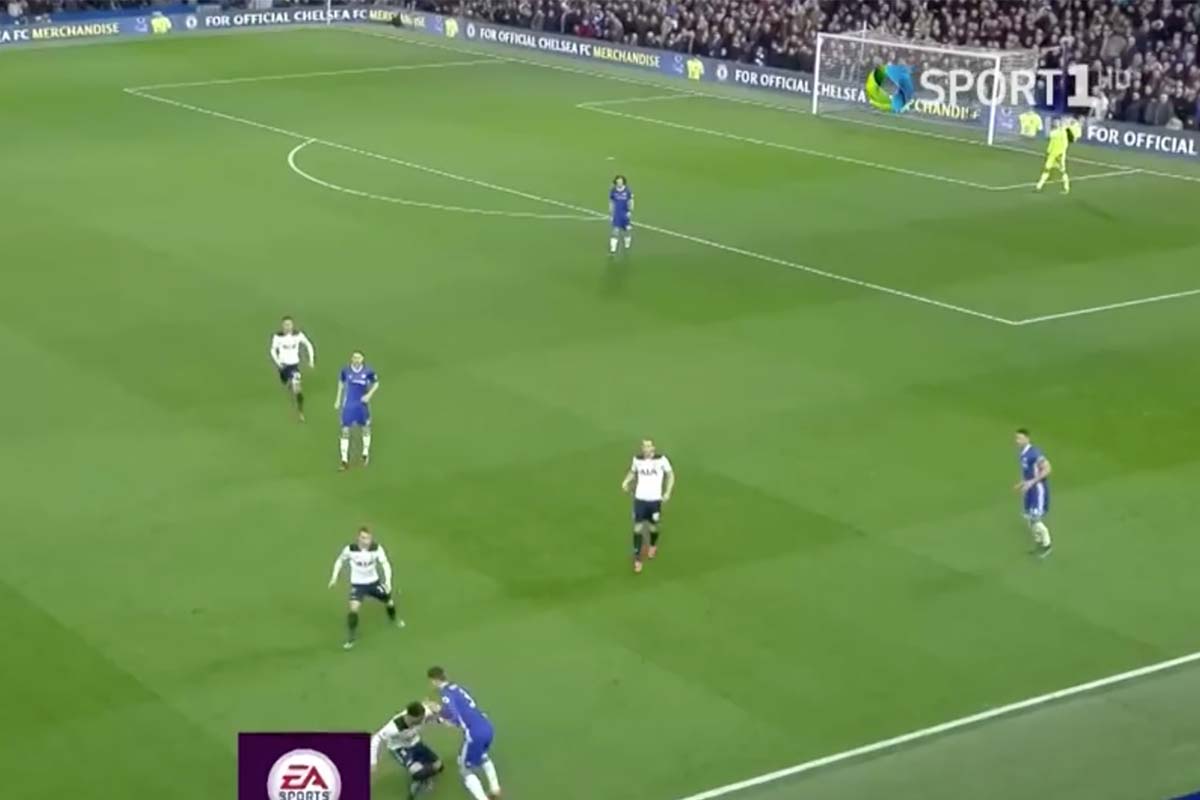 The three picture are taken just after the Spurs opener and the away side have a spring in their step. Chelsea look to build from the back with David Luiz finding Gary Cahill before the Englishman plays the ball to Marcos Alonso, the left wing-back. As you can see in the picture the Spurs players might not press the Chelsea centre-backs put they position themselves in a way which dictates where Chelsea can play. They then press at the right opportunity, in this instance it’s the ball going to Alonso, and regain the ball back in a dangerous area with plenty of players in support. 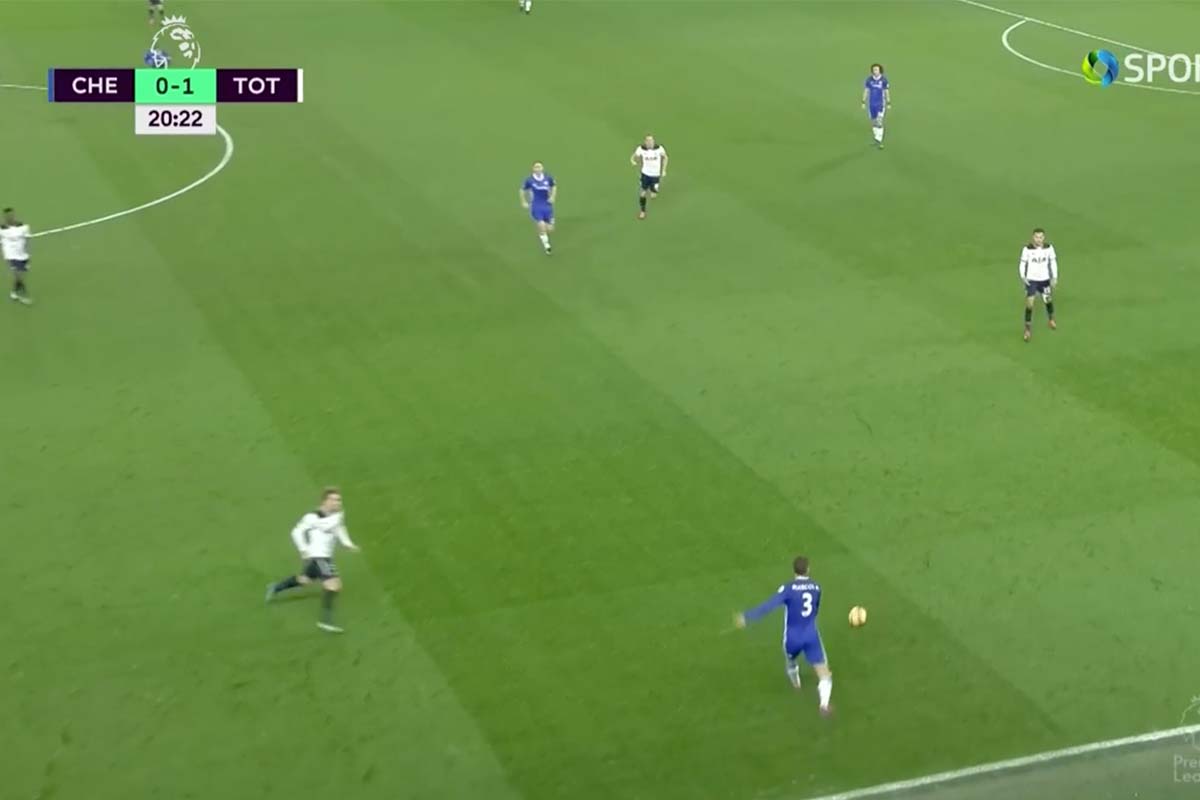 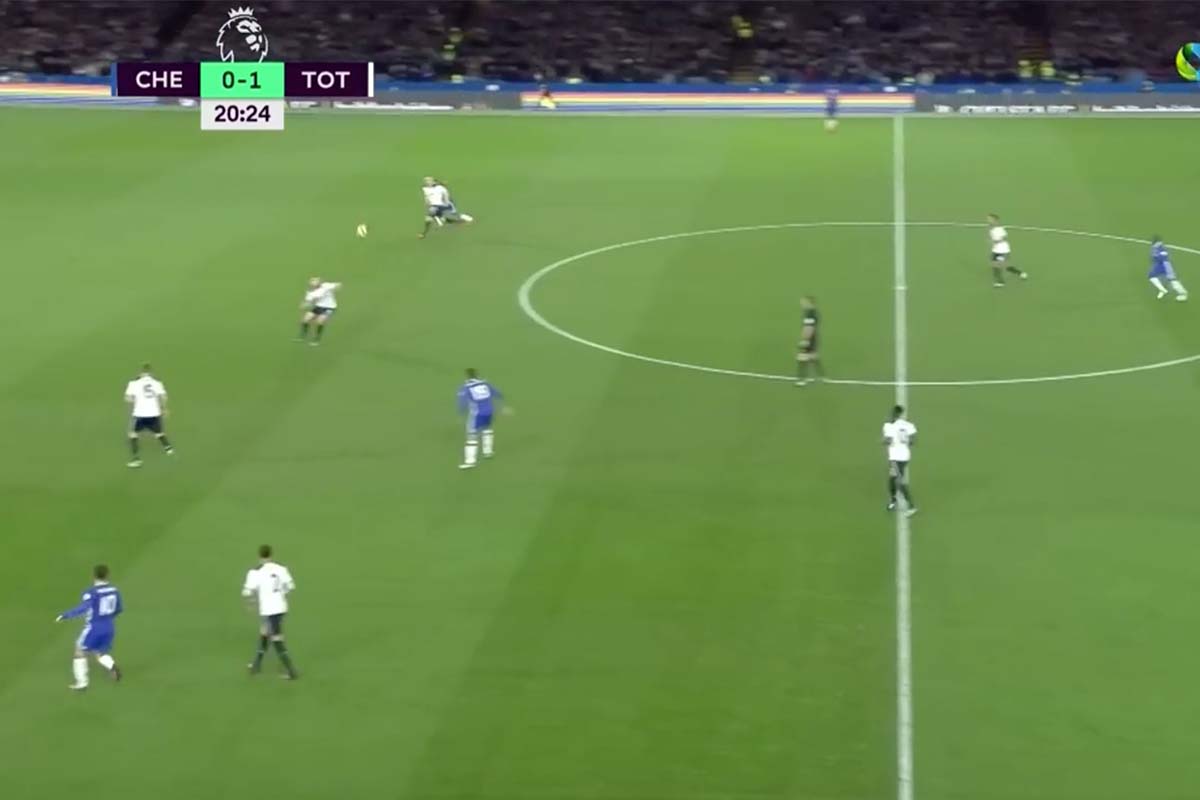 The Spurs press rattled the Chelsea team. It was disjointed chaos at times and this seemed to suit Spurs. In the above to pictures, taken after the original thee above, we see the ball being played to Alonso and even though the Spurs press isn’t as ferocious as it could be he opts to go long and uses his weaker foot to do so. In the second picture you see the Spurs defender heading the ball away under no pressure and Spurs are able to start yet another attack.

You’re going to lose the ball one way or another. Despite Hoddle’s claims, looking to work the ball out from the back enables you to build as a team meaning there’s more support and because of this you’re far less stretched. Just getting rid of the ball when under pressure rarely achieves what it says on the tin. It doesn’t give the team a breather because it means you have to transition from defence to attack quickly to support the attacker or face yet another wave. That’s why when you hear commentators saying a team is turning the screw it’s because the opposition are just looking to clear their lines and not looking to start an attack.

The former think defenders are there to just defend and should just get rid of the ball whereas the latter have embraced the fact having defenders who are comfortable in possession can be beneficial to the attack. It’s no coincidence the top 7 teams in the Premier League right now all play out from the back.

While some teams can be accused of overplaying when in possession of the ball in defence, and Hoddle may have a point that it’s too safe at times, for the most part teams don’t adopt this style just because it’s popular. If you have the right sort of players it can be an effective tool in breaking down teams looking to sit deep in compact lines. It’s also vital in teams looking to play through a high press.

The Perks of Playing out from the Back. 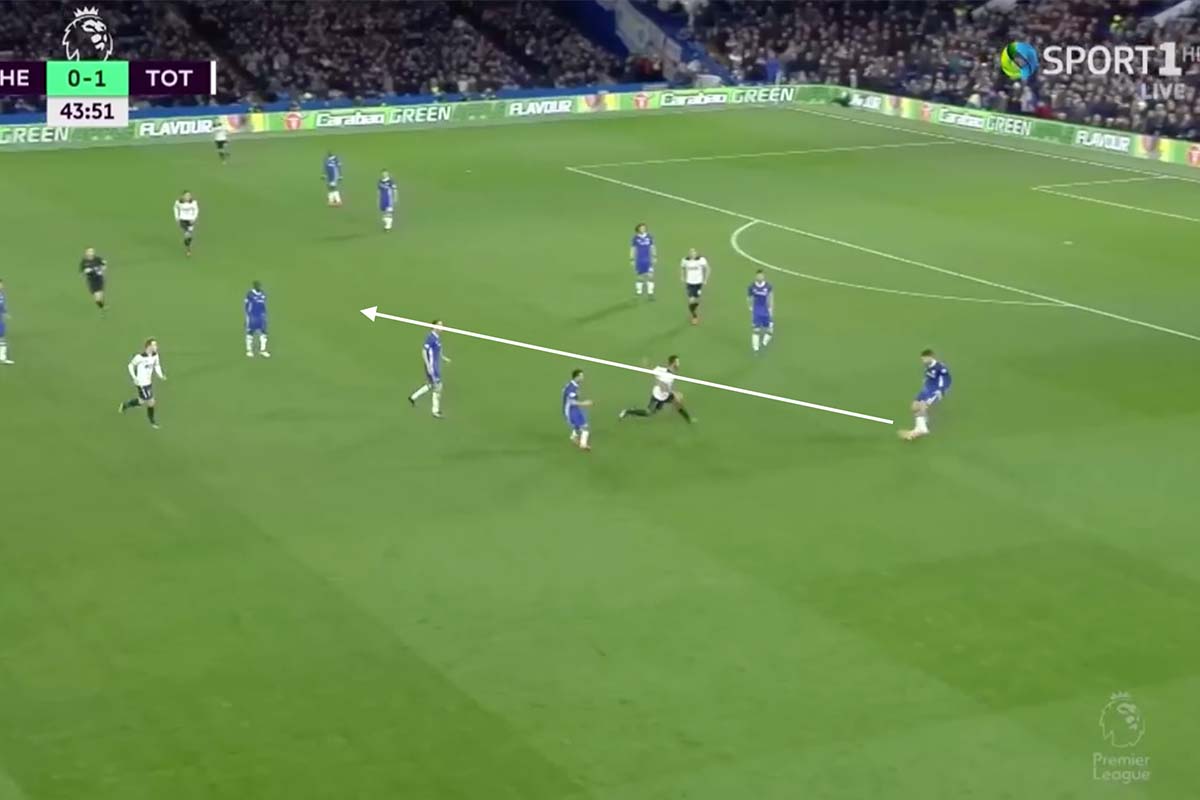 Diego Costa tracks back and dispossess Mousa Dembele and the ball is played to Marcos Alonso. In the picture you can see that Chelsea have all ten outfield players in their own half and if Alonso goes long there’s nobody for him to hit and Spurs are just going to come back at them. The Chelsea number 3 plays a pass in field to N’Golo Kante. 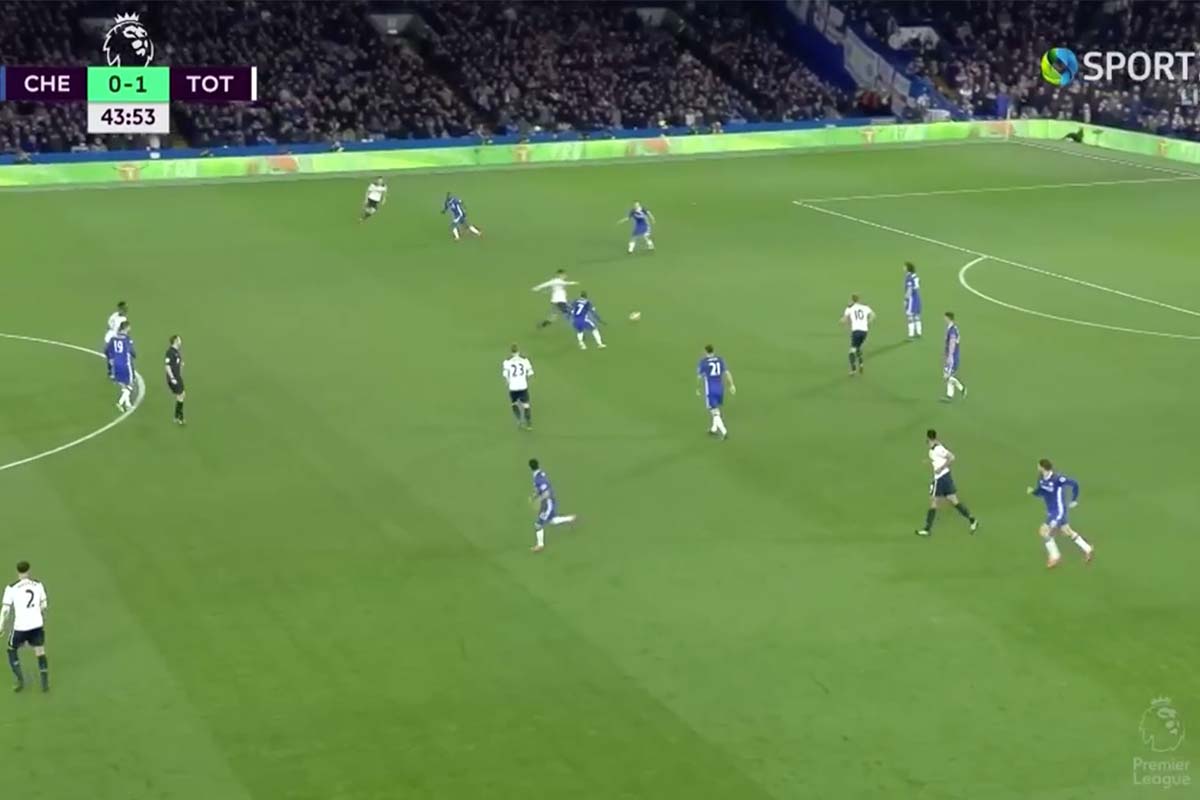 Spurs look to press Kante quickly because if he loses the ball there they’re straight in at the Chelsea defence. However, Kante resists the press and plays it backwards to Cesar Azpilicueta. 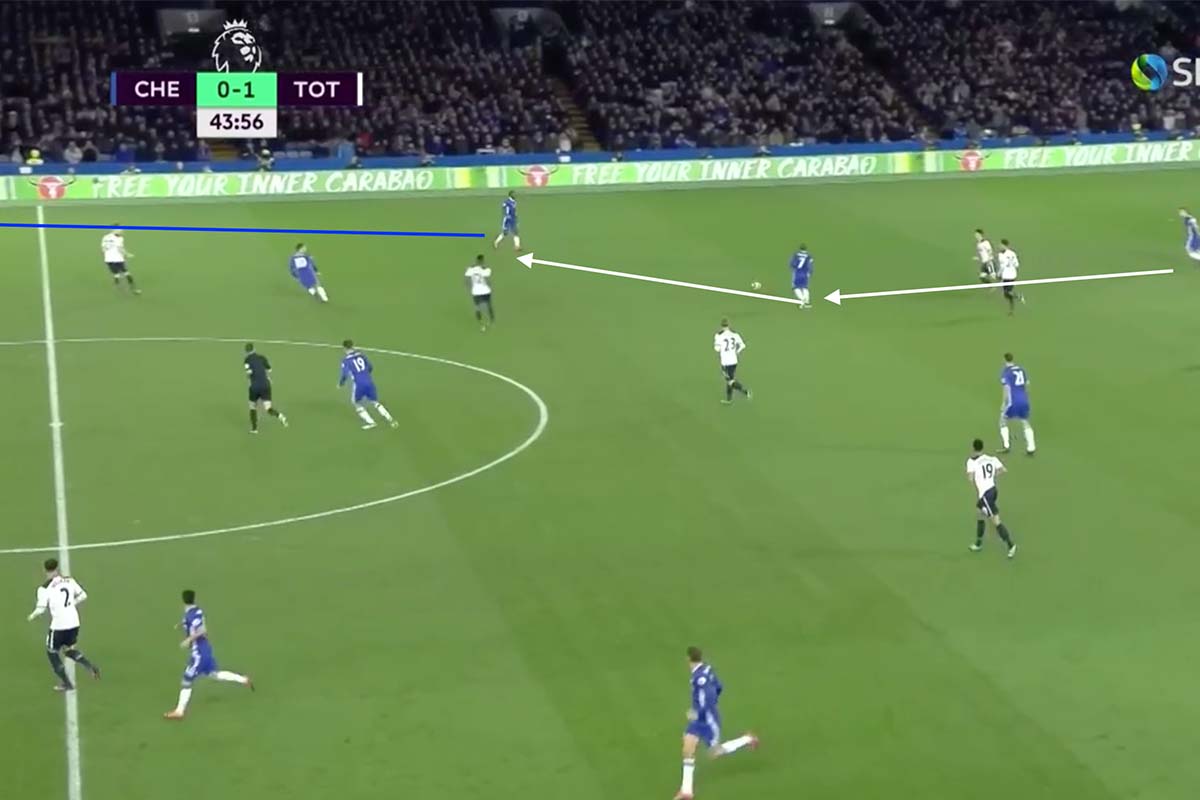 Two Spurs men, Alli and Son, look to press Azpilicueta but he manages to thread a pass back to Kante and in turn takes three Spurs players (Son, Alli and Kane) out of the game and this starts a Chelsea attack. Kante then works the ball out to Moses, who is free because his man, Son, went to press Azpilicueta earlier on. He makes his way down the right touchline. 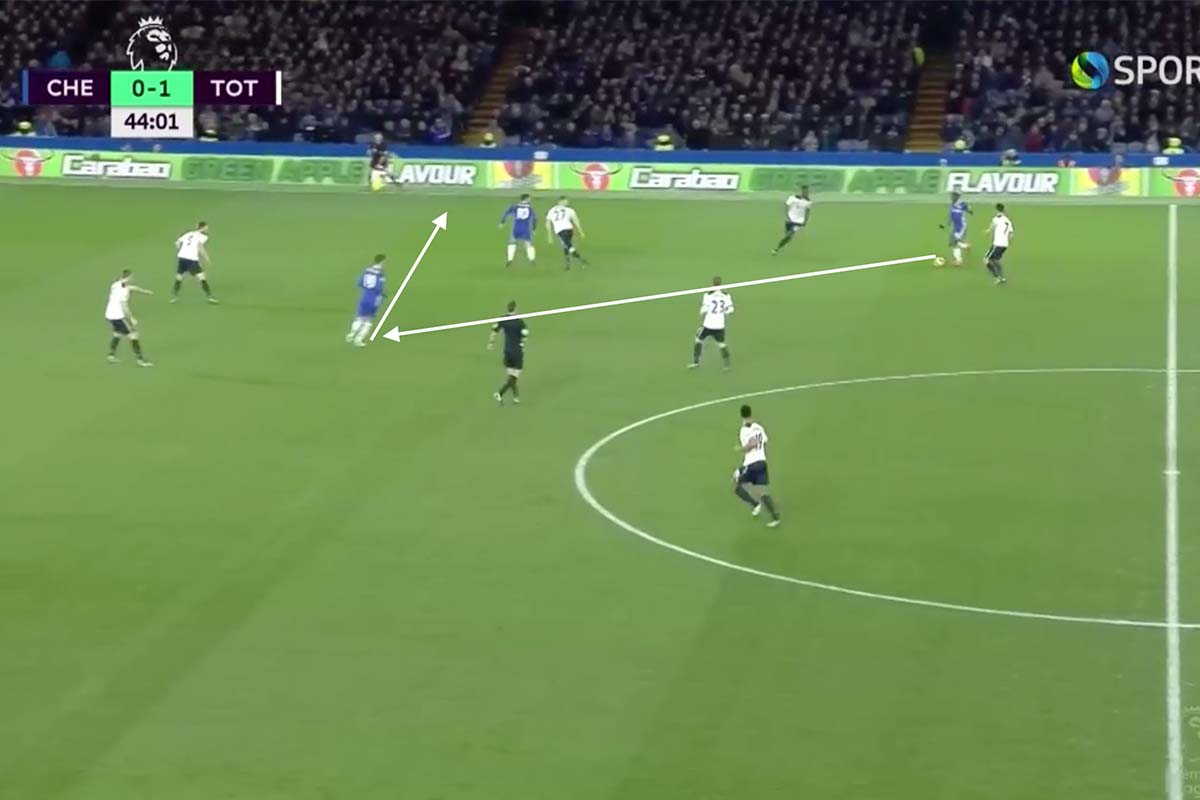 Moses then plays a pass inside to Costa and the Chelsea striker works the ball wide to Eden Hazard. Spurs aren’t quick enough to shut Moses down and his pass get’s Chelsea in behind the Spurs midfield. The fact they looked to play it out means when Costa receives the ball he’s not isolated and Chelsea have a foothold in the Spurs third. 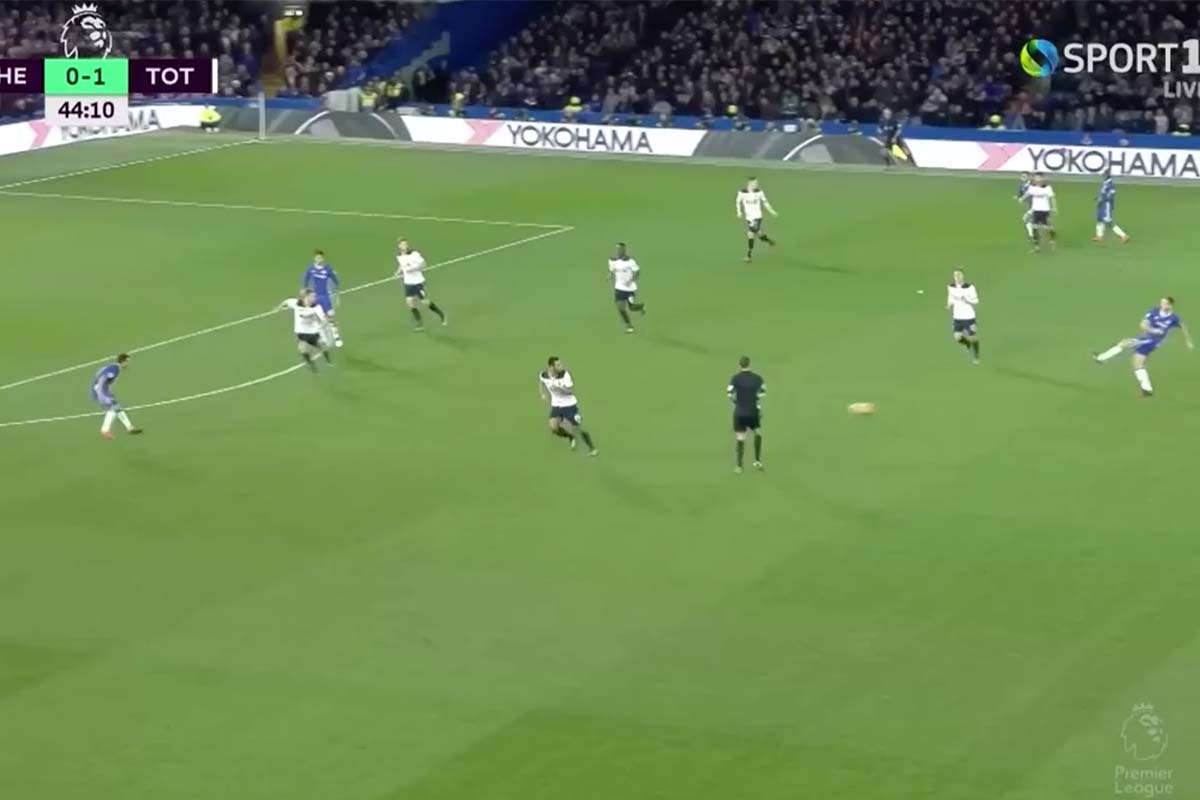 Hazard works the ball to Nemanja Matic in the middle of the pitch and because of how stretched Spurs are he’s able to get a pass away inside to Pedro. The former Barcelona man gets the ball under control before curling home the equaliser. Pedro has so much space because Alonso is on the left and Walker is keeping tabs on him. All this stems from Chelsea resisting the temptation to just go long, breaking the initial press and then being able to play through the midfield line. It was a well worked goal that never would have come about if they didn’t play out from the back.