No-one inside Vicarage Road on Saturday was left in any doubt as to what Watford forward Richarlison thought of being substituted.

The Brazilian threw down his gloves, slapped the palm of his replacement, Stefano Okaka, and made a beeline for the bench where he sulked for the remaining 36 minutes of the Hornets' 1-0 win over West Bromwich Albion.

It was a different reaction to a few weeks prior when he was visibly left in tears after Javi Gracia decided to withdraw him with 25 minutes to play in the 4-1 annihilation of Chelsea.

It means Richarlison has now been replaced in each of Gracia's five Premier League games at the helm – more than in his first 24 outings of the season.

Asked about the 20-year-old's reaction following the win over the Baggies, Gracia told the Hertfordshire Mercury: “It’s not easy to take these decisions and to change players.

“But in that moment, in the last two games, I thought the best option for the team was Richarlison to come off and put in another player.

“I don’t have a reason to explain why I take that decision. In every moment I take the decision only thinking about what is best for the side.”

Richarlison was one of the stars of the first half of the season for Watford leading to reports he is a Tottenham transfer target ahead of the summer window opening. There have also been Chelsea and Arsenal transfer rumours.

But his form mirrored that of the team as Watford came off the rails in the final months of 2017. He has not, however, picked up under Gracia, leading to speculation he was unhappy at the sacking of Marco Silva, the coach who snatched him from underneath the noses of Ajax and Chelsea last summer.

When the Portuguese was sacked Richarlison simply tweeted an angry face emoji.

“I owe Marco a lot because he is the one that called me before I came to Watford. I moved here because of him,” Richarlison later told the Evening Standard.

“He helped me every day and was extremely good with me. Marco is the person who is least to blame for the bad results and the one who paid the highest price. The ones on the pitch were to blame, not him.

“I was asleep in my house and Heurelho Gomes came over, woke me up, to tell me the news. I was very sad and reacted without thinking.”

In 24 Premier League games under Silva's tutelage, Richarlison scored five times, supplied four assists and 19 key passes for his team-mates, as well as winning 46 per cent of his take-ons and 43 per cent of the aerial duels he contested.

But since Silva's sacking following a 2-0 defeat at Leicester City on January 20, he has failed to score or assist, made just one key pass and seen his success in take-ons drop to 38 per cent. He is winning as many headers as ever.

Prior to Silva's dismissal no Premier League forward had made more tackles than Richarlison (46). He has added just six since and been overtaken by Roberto Firmino has closed the gap from 33 to 49 in third.

But his form had begun to slide long before Silva was relieved of his duties.

Richarlison last scored for the Hornets in a 2-0 win over West Ham United on November 19. In the first 12 games of the season leading up to that point, Richarlison scored five times and created 14 chances, winning 50 per cent of his duels and hitting the target with nine of 33 efforts (11 blocked).

In 17 games since, the one-time Chelsea transfer target has failed to find the back of the net, created just ten chances, won only 47 per cent of his duels and worked the goalkeeper with seven of 37 strikes on goal.

So where has it all gone wrong for Richarlison? His performances in the early months of the season were characterised by a boyish – almost impish – enthusiasm and a fearlessness to run at defenders and get into goal-scoring positions.

As we can see below from Richarlison's expected goals (xG) map, via Understat, he has been shooting consistently from similar areas throughout the season. The red dots are shots which missed the target. Blue dots denote efforts which were saved and purple dots equate to blocked shots. Green dots, crucially, are goals.

Something which might give a clue into Richarlison's drop-off in effectiveness is his position on the field. In the early months of the season he was virtually playing as an out-and-out striker.

In the 2-2 draw at West Bromwich Albion in September – in which he scored Watford's equaliser in the fourth minute of stoppage time – Richarlison's average position made him the most advanced member of the Hornets side (shown below, No.11). 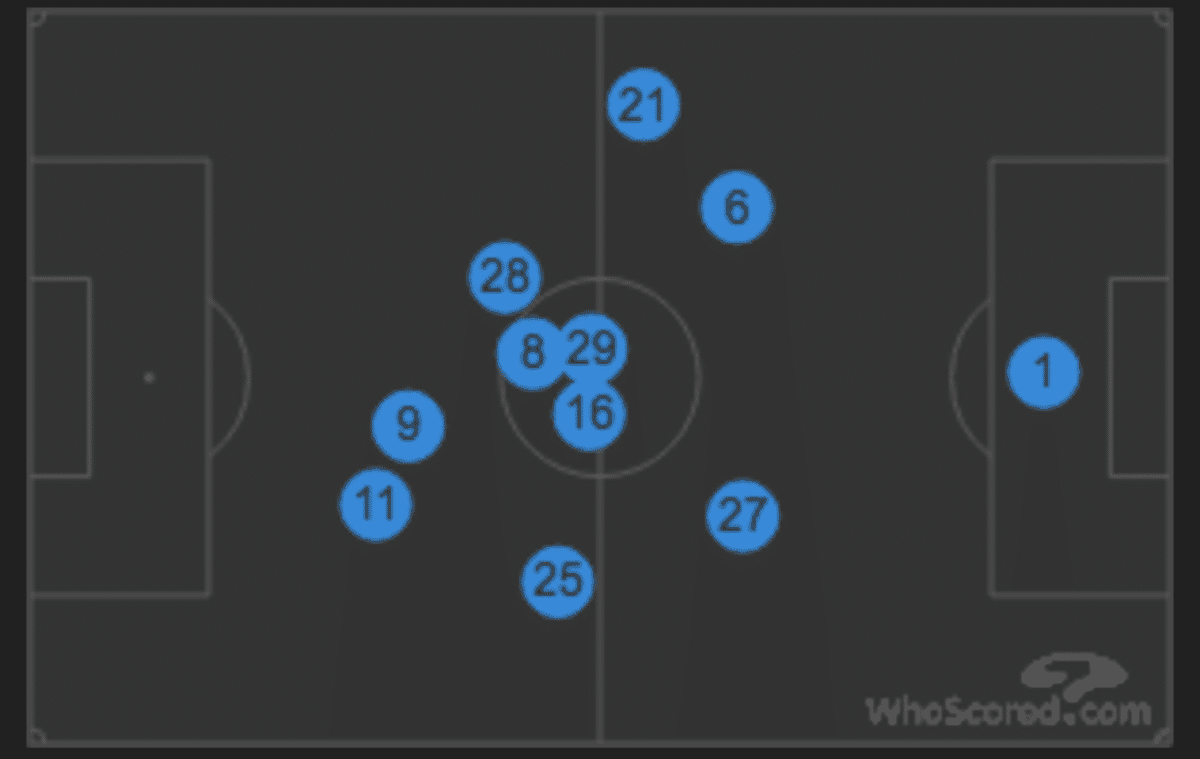 However, he has gradually been pushed backwards, demonstrated in last weekend's 1-0 win over Everton where he was closer to left-back José Holebas (No.25) than striker Troy Deeney (No.9). 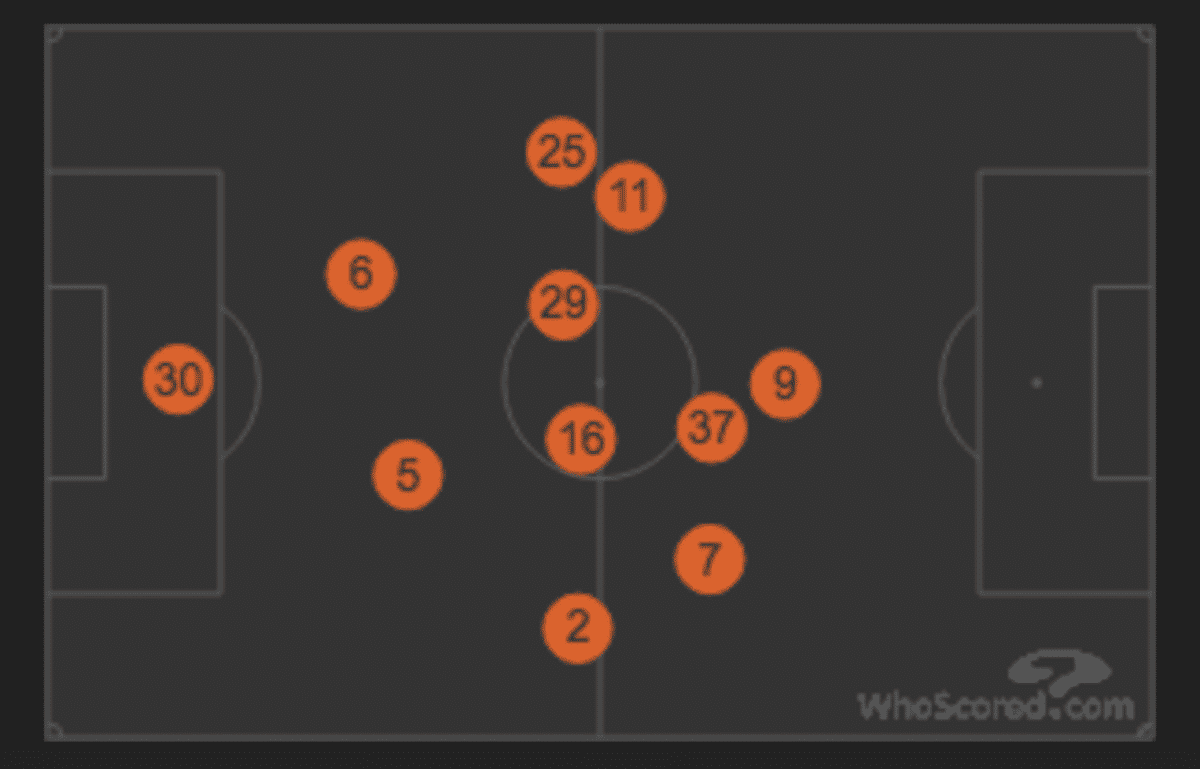 That could be attributed to fatigue. Richarlison arrived in England having played through the summer with Fluminense in the Brazilian Serie A.

His last game in the Brasileirão was a 1-0 loss to Corinthians on July 23. Twenty days later, having flown halfway across the world, he made his Watford debut as a substitute in a 3-3 draw with Liverpool on the opening day of the season.

What he would not have anticipated, however, was featuring in every top-flight fixture this season, completing 19 of 29 games. That means since the 2016/17 Premier League season ended on May 21, 2017, Richarlison has played 3,481 minutes of league action alone. No Premier League player has clocked up more than 2,610 this term.

It's little wonder, therefore, the Hornets' No.11 is struggling to replicate his form of earlier this season. Richarlison wants to be entrusted with more minutes on the field, but it might not do him any good.