One of Southampton's biggest strengths since reaching the Premier League has been their ability to carry on as normal, regardless of how many players they lose each summer, or who the manager is.

Yet, five games into Mauricio Pellegrino's reign and their remarkable consistency looks to have undermined the new coach already. Much like last season, the Saints are boring.

The South Coast club managed to keep Liverpool transfer target Virgil van Dijk. But retaining the Dutchman has not helped Southampton where they are weakest: scoring goals.

The media scratched their heads. They could not understand why. Surely a top-half finish and a shot at a trophy was par for the course? But Saints fans knew better. They had enjoyed the football served up by Maurico Pochettino and Ronald Koeman. Less so Claude Puel.

When Southampton finally parted company with the Frenchman there was a sense of relief. The Saints had gone from being one of the most exciting teams to watch outside of the traditional top four to one of the least.

Former Liverpool defender Pellegrino was the man charged with breathing new life into the Hampshire side. After excelling at Aláves last season in La Liga, the hopes were high.

But the former centre-half has struggled to reinvigorate a side left void of any creative spark by his predecessor. Already the noises coming out of St Mary's are similar to last season.

Five games is a small sample size on which to judge a manager. Crystal Palace clearly didn't feel that way, though, when sacking Frank de Boer four games into his Selhurst Park revolution.

So here's the damning statistic from Pellegrino's reign so far: Southampton are the second-most wasteful team in the Premier League.

After Everton, no-one takes more chances to score a goal. The Toffees – ironically under the auspices of Saint-turned-sinner Koeman – have scored twice in the league this term, at an average of 15.5 shots per goal.

Southampton, meanwhile, fare only slightly better with their four goals coming at 14.2 shots per goal.

The good news from a Saints perspective is Pellegrino's side are the seventh-most creative team in England's top flight. With 57 chances created in five games, only the big six of Spurs, Liverpool, Manchester United, Manchester City, Arsenal and Chelsea have crafted more openings.

But the South Coast side aren't taking the opportunities they carve out. And that is cause for concern.

What goes part of the way to explaining those issues is the fact Southampton take nearly as many shots from outside the penalty area as they do in it – 46 per cent, which is the fourth most in the league. 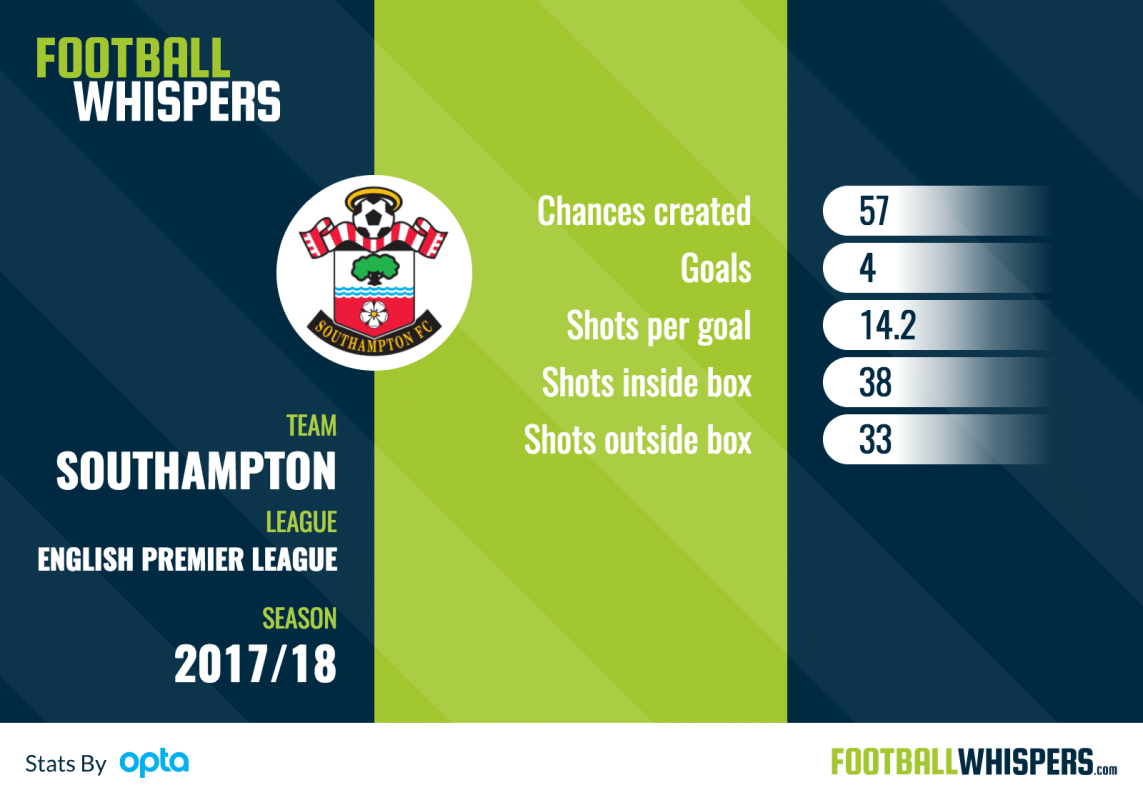 Everton, as the next most profligate team, have taken 26 shots from inside the penalty area and just 15 from further out.

The two most clinical teams are the Manchester clubs. United have let fly 58 times inside the area to 36 times outside while City (57-36) are also more active inside the 18-yard box.

So where do Southampton go from here? Clearly some sharpening up in front of goal would be welcome. The January signing of Manolo Gabbiandi from Napoli went a long way towards making the Saints a more clinical attacking outfit. But the Italian has scored just once in four top-flight starts this term.

Stylistically, Southampton are fairly easy to figure out. With 47 per cent of their possession in the middle third of the field – the second-highest proportion in the Premier League – they spend too much time playing in front of their opponents, which is explains why so many of their shots come from outside the box.

The 442 short passes Southampton average per game is the sixth-highest figure in the league. Conversely, the 63 long passes they attempt are the sixth fewest. Although the Saints' short-passing style has been part of their identity in recent years, it might be time for Pellegrino to loosen the reins and mix it up a bit.

For a club that's hung its hat on continuity in recent times, that will be easier said than done.