The result left Liverpool manager Jürgen Klopp frustrated and feeling short-changed, but Newcastle United can be thoroughly satisfied with their afternoon's work, holding the Reds to a 1-1 draw at St James' Park on Sunday.

“I thought that we were the better, more active side and that we created more chances Clear chances, which we usually should use.” the German coach said in his post-match press conference.

“Yes, I think we should have won. But I know how it works and I have to accept it.”

Klopp was spiky and evidently bitter that his side were unable to secure all three points against the Magpies, but Liverpool fell right into Newcastle's trap, one carefully laid out by manager Rafael Benítez.

The Spanish tactician remains one of the game's finest single-game coaches, capable of masterminding bespoke plans to dismantle an opponent, often from an underdog position.

While in charge at Anfield, the former Valencia boss exhibited this remarkable ability by guiding the unfancied Merseysiders to a Champions League triumph, overcoming the much mightier Juventus and AC Milan to do so.

At Newcastle, Benítez is working with slightly blunter tools, but his coaching prowess is such that fans of the North East club can expect to spring upsets like Sunday's on a fairly regular basis.

Benítez's success throughout his career has been built on his work on the training field. The meticulous Spaniard prizes defensive solidity above all – something that was a contributing factor in his demise at Real Madrid – drilling his players relentlessly so they are fully cognisant of the positioning required and the individual tasks he sets them.

The fruits of this work were on display against Liverpool. Klopp's men are among the most thrilling attacking sides in Europe, and avoiding being outscored by them will require a degree of good fortune no matter who the opponent, and Newcastle certainly enjoyed their share of luck on the day.

But this shouldn't detract from what was an incredibly disciplined and well-organised performance, with the whole team defending in unison. 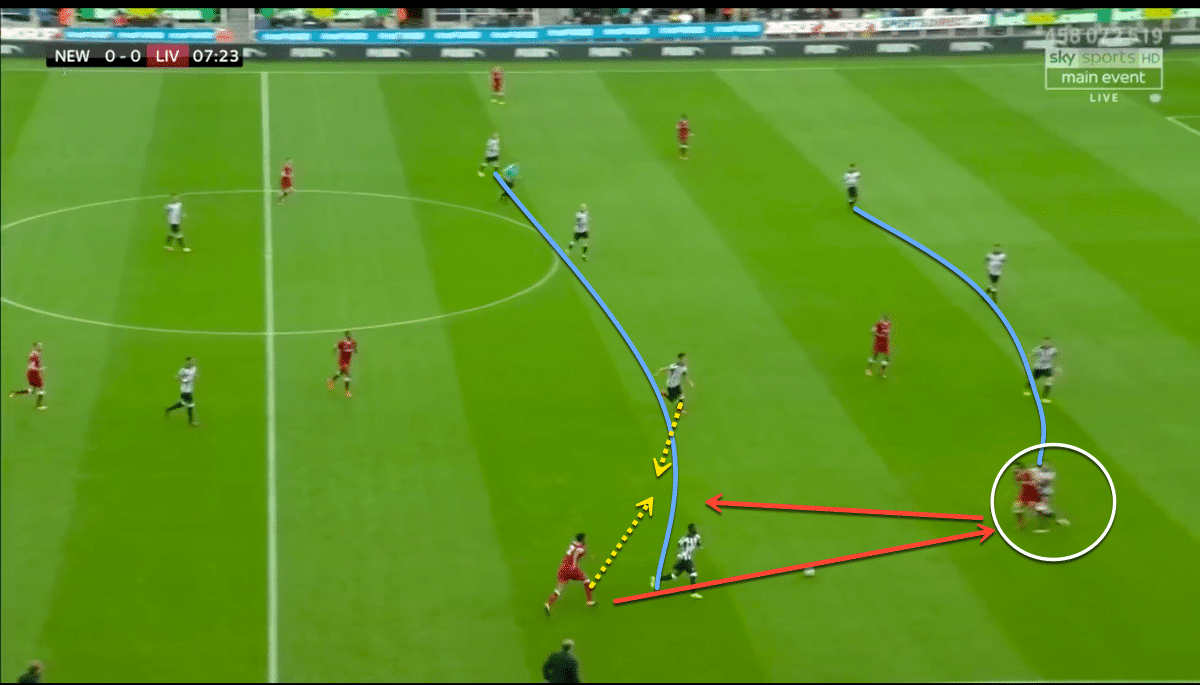 Above, we see the simple yet effective set-up Benítez employed to frustrate his former side. Operating with two clearly defined lines of four, each moving together, maintaining optimum spacing, Newcastle are able to limit Liverpool's space in dangerous areas and, for the most part, keep the play in front of them, rather than being turned and forced to defend while facing their own goal.

The Magpies also applied pressure expertly. The above image shows Liverpool right-back Joe Gomez playing a give-and-go with Mohamed Salah. As the Egyptian winger receives the ball, he is instantly put under intense pressure by his marker, while Gomez's run for the return pass is already being cut off by Mikel Merino in central midfield.

What makes Newcastle‘s execution of this tactic all the more impressive is that they were able to apply pressure without compromising their shape, something that is, again, credit to Benítez's work in training.

Benítez also appeared to have identified the wings as Liverpool's most dangerous area, and singled out Salah and Sadio Mané for special attention; any time either attacker looked to get on the ball, they were immediately closed down by two to three surrounding Newcastle players, preventing their forward progress and forcing them back, away from goal 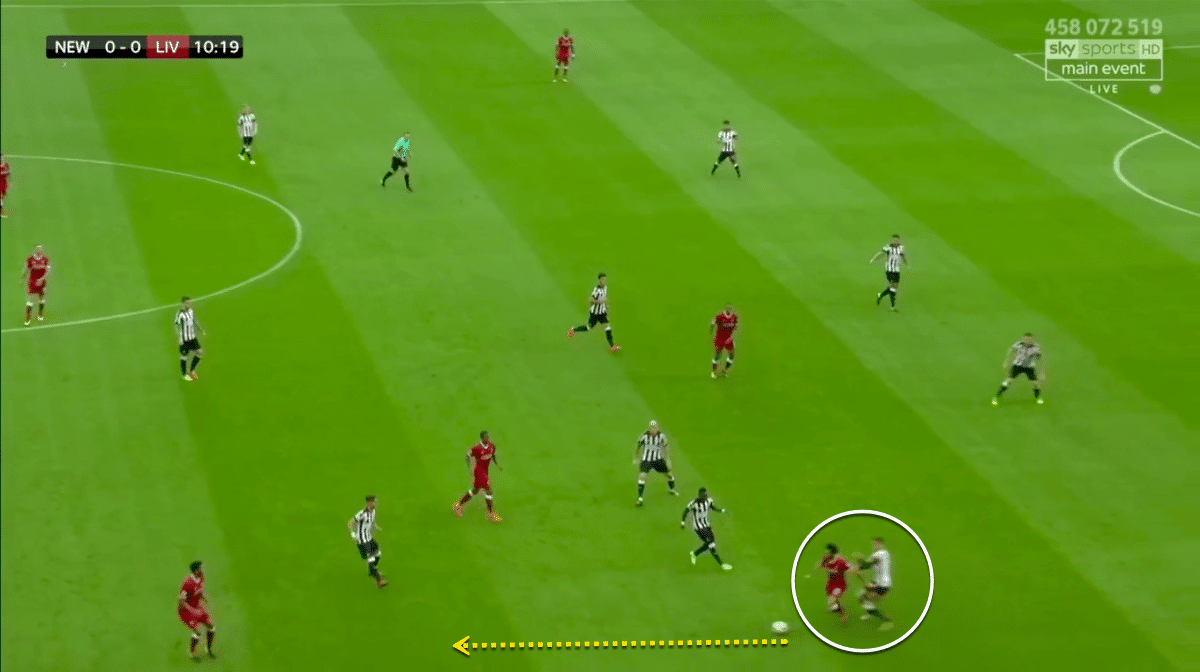 Above, we see Salah being harried when receiving a pass, pushing the former Roma winger back towards his own goal, where his is no threat to Newcastle. 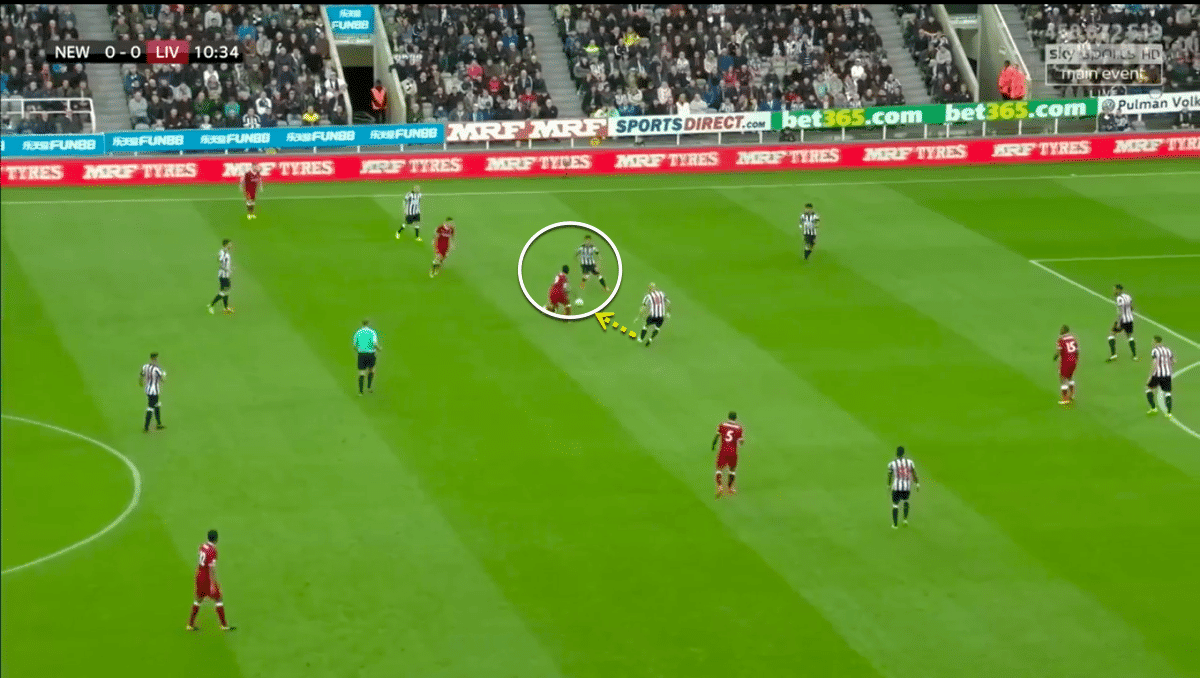 And in this image, we see Mané take possession (circled) with Merino immediately on his case and Jonjo Shelvey moving across to crowd the gifted former Southampton man out.

As is to be expected, Liverpool, with their vast attacking talent, enjoyed the lion's share of possession (67.8 per cent), 17 total shots to the home side's eight, and a better quality of chances, evidenced by an xG (expected goals) score of 1.6 to Newcastle's 0.6.

But the way Newcastle set up to frustrate their visitors, and their success in doing so, means they cannot be begrudged the point they earned.

Such results against superior opposition could become commonplace at St James' Park, as long as Benítez is in charge, but the Magpies are held back by their lack of a truly top-class striker.

A summer of miserly spending has caused a rift between the Spanish manager and club owner Mike Ashley, and Benítez would've hoped to have been afforded the funds to spend more than the £5million outlay that brought Joselu to the club from Stoke City.

Newcastle have only conceded six goals in seven Premier League games so far this term, but, in finding the net only six times themselves, they are hamstrung by a lack of firepower.

What they do have, however, is a manager of continental renown, capable of consolidating their Premier League status after a year away, and building a bright future for the club in spite of questionable funding.