Few would have tipped Augsburg left-back Philipp Max to be one of the breakout stars of the Bundesliga season, but the 24-year-old former Bayern Munich youth product is enjoying a stellar campaign.

Ahead of the German top flight's winter break approaching, Max led the talent-rich division in assists (nine) and was being tipped to break into Joachim Löw's Germany squad for the World Cup.

“Since I was a kid, I’ve dreamt of playing abroad. I think the English league would go well with my style,” he recently told SportBild. But he might not be WWK Arena for long, as, according to the Daily Mail reports Manchester City, Manchester United, Liverpool, Tottenham Hotspur and Everton are all chasing Max's signature.

Who is Philipp Max?

Born in Viersen, a relatively small town near Mönchengladbach in the state of North Rhine-Westphalia, Max was picked up by 1860 Munich as a teenager, before then being poached by local rivals Bayern, joining their youth set-up in 2007.

Max never played a senior game for Bayern, though, switching to Schalke in 2012 and making his Bundesliga bow for the Gelsenkirchen club two years later.

Yet, the young full-back was unable to crack the first team on a regular basis at Schalke, and left to join Karlsruher in 2014. Max impressed during his single season with at Wildparkstadion, earning a move to Augsburg in the summer of 2015.

Still uncapped at senior international level, Max was part of the Germany side that earned a Silver medal at the 2016 Olympics, narrowly missing out on gold, losing on penalties to home nation Brazil in the final.

What are Max's main strengths?

Max performs most aspects of his role to a very high level, and is constantly improving in most areas too.

Athletically, he has the ability to traverse up and down the flank for 90 minutes, playing a key role for Augsburg as the side's main source of width on the left side. Max is also strong defensively in one-v-one situations – he is dribbled past just 0.4 times per 90 minutes on average – and possesses a surprisingly good range of passing.

However, it is undoubtedly his crossing ability that stands out when analysing Max's attributes, both from dead-ball situations and in open play. 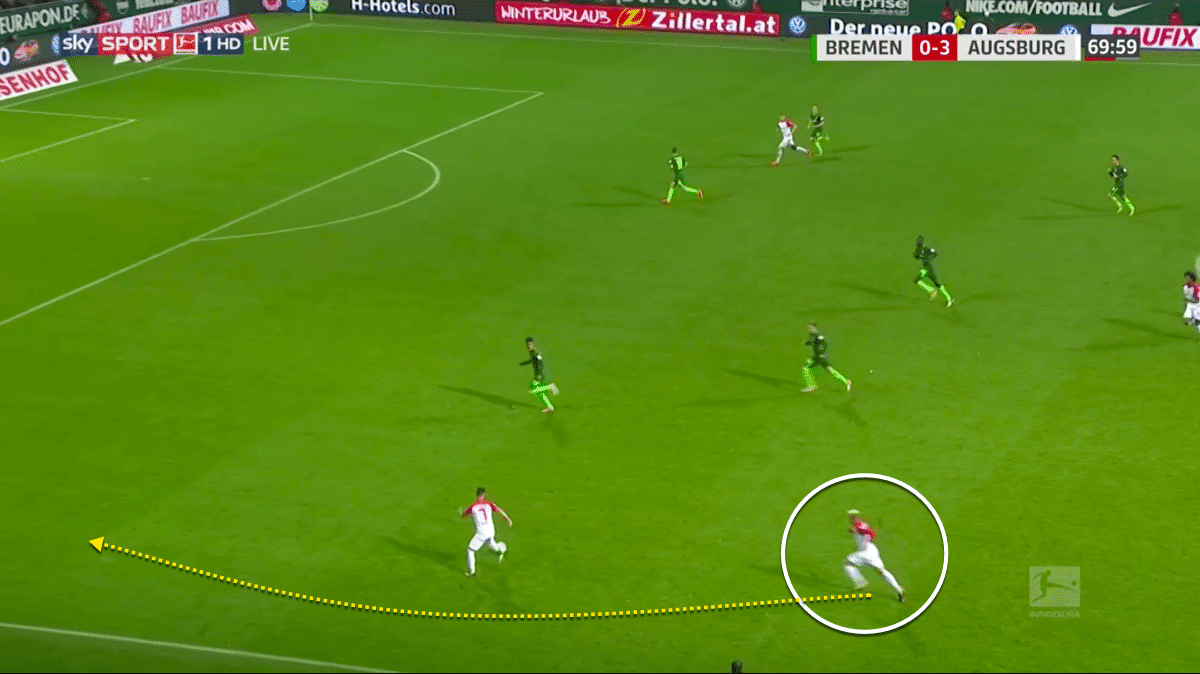 In the above image, from a recent win over Werder Bremen, we see Max (circled) breaking forward in his typical fashion, overlapping the player in front of him to stretch the opposition wide and offering a passing option for the man in possession. 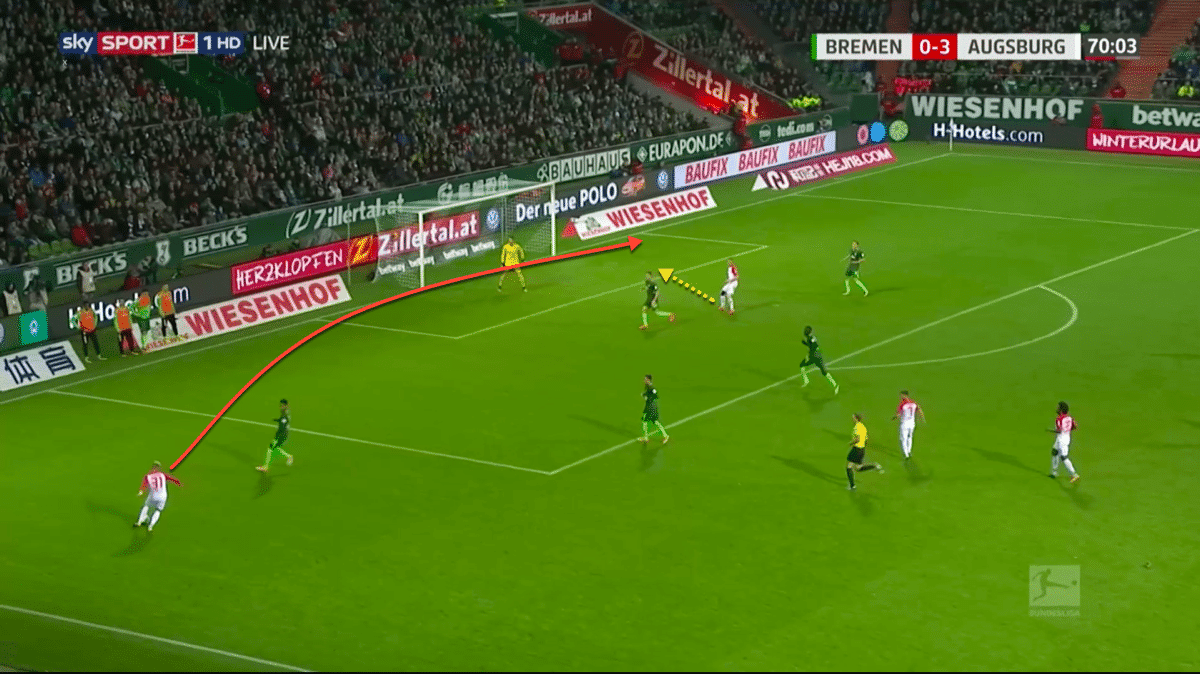 When released down the flank, Max swings an inviting first-time cross into the penalty area, perfectly locating the danger zone where the ball is too far out and moving too quickly for the goalkeeper to collect, and backtracking defenders are wary of any contact turning the ball into their own net.

On this occasion, towering Austrian striker Michael Gregoritsch heads over the bar, but this is exactly how he and Max have combined for several goals already this term.

Currently in the form of his career to date, Max is producing 3.9 accurate crosses and 2.9 key passes per 90 minutes in the Bundesliga this season – stunning averages for a player in his position.

What are Max's main weaknesses?

It's not necessarily a weakness per se, but Max's tendency to aggressively close down the man in possession on his side is something that teams could look to exploit.

For example, an opposing manager could aim to draw Max out of position by working the ball to the winger the German is tasked with picking up, to then send a runner into the space the full-back has vacated by stepping out of his station to pressure the ball.

This trait, though, is more a consequence of Augsberg's aggressive style of defending, pressing ferociously inside their own half to prevent the opposition getting time on the ball.

There is no reason to believe that, under a different coach and in a different system, Max could not adapt to a new, more measured style of defending if required.

On the ball, Max is capable of some stunning cross-field passes, but his overall pass accuracy of 68.9 per cent is something he will have to improve if he is to make a step up. 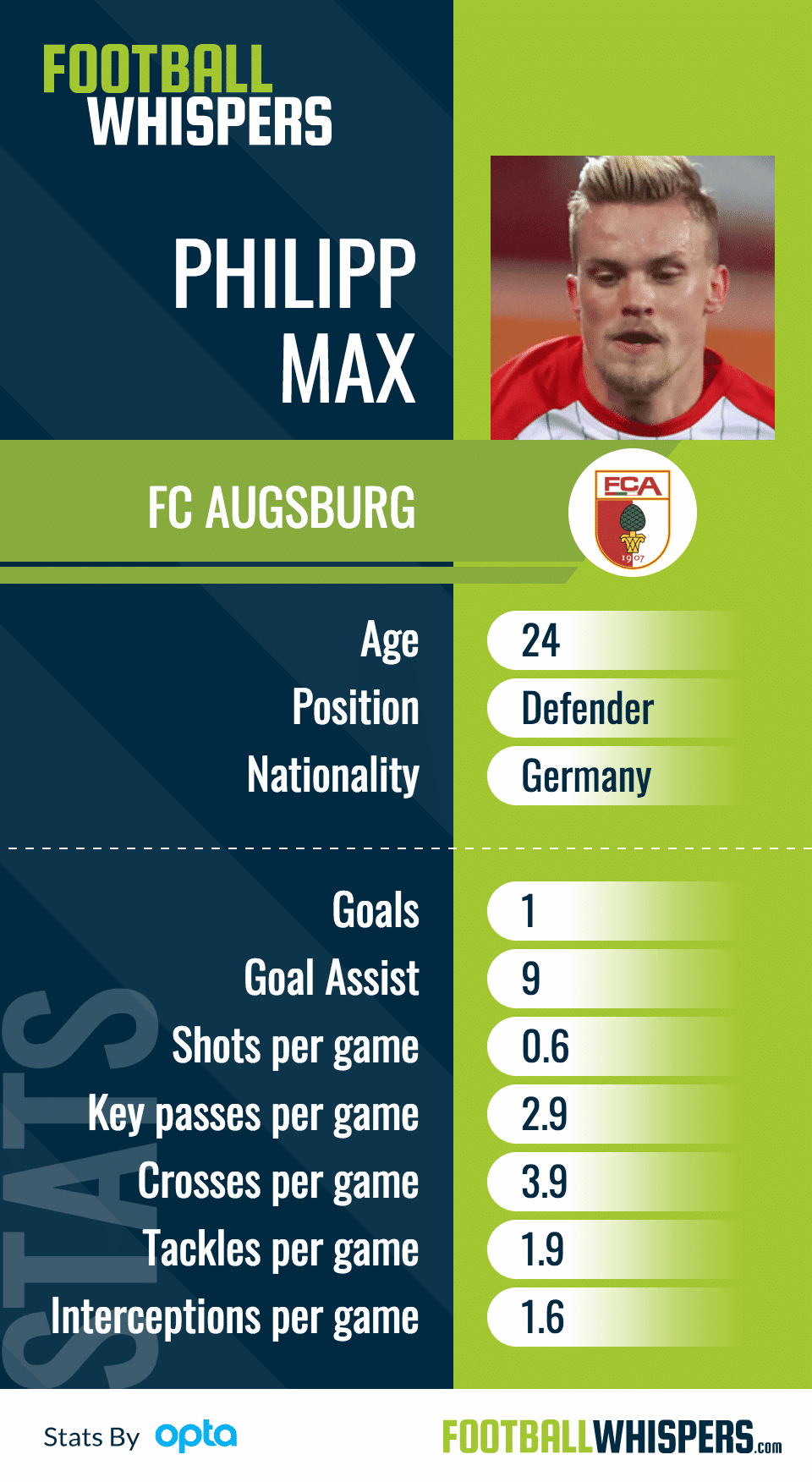 How much is Max worth?

Although no price tag has been mooted in the reports of Premier League interest in Max, the player recently penned a contract to extend his stay with Augsburg until 2022, so the Bundesliga club will expect to be well compensated if they are to part ways with their dynamic left-back.

But, without a great deal of top-flight pedigree and still far from a household name, Max's value will not be extortionate, and would still likely represent a bargain in comparison to some of the other players linked with moves to England.

Augsburg could reasonably expect a return in excess of £20million for the 20-year-old, whose rapid development points to him being a sound investment at that cost.

Why Premier League clubs should move for Max

Linked with Manchester City, Everton, Liverpool, Manchester United and Tottenham Hotspur, it seems Premier League scouts have decided Max would be a sound addition to the top end of the English game.

Stylistically, he appears to have all the tools to thrive should he make such a move. Physically strong, an eager challenger, fast, dynamic and technically sound, Max ticks every box of an orthodox and effective full-back capable of mixing it in England's upper echelon.

Snapping Max up now would be an astute move for any of the aforementioned clubs: the 24-year-old has matured exponentially over the last 18 months and looks ready for the next step in his career. Plus, with the World Cup on the horizon, he'll be pulling out all the stops to force his way into the Germany squad.

In football, as in life, timing is everything: signing Max this winter would be striking while the iron's hot, and only getting hotter.