It started with an almost laughable rumour which refused to go away. Then it became somewhat of an exciting talking point as the prospect began to become more realistic, before soon descending into a farcical and drawn out mutually aggrandising media campaign between player, club and sponsor, as whisper was followed by counter-murmur — “Blah, blah blah” said the bandwagon jumping Adidas advert.

But, eventually, Paul Pogba sealed his world record breaking return to Manchester United, with the Red Devils forking out a whopping £89 million to re-sign the player they allowed to leave for a minimal compensation fee of around £800,000 just four years earlier.

By the time Pogba took to the Old Trafford pitch to make his second debut in a 2-0 win over Southampton in August, the knives were out and months of headlines had already been written in advance.

If the 23-year-old didn’t immediately set the Premier League alight with 30-yard screamers and assist after assist, he’d be written off as the most expensive flop in the history of the game; a waste of money; “United would have been better off going for N’Golo Kante” so the narrative ran.

And, in truth, Pogba experienced a bit of a slow start to life back in Manchester, but there were mitigating factors contributing to that. He had, after all, joined United after an extended holiday in the USA following his participation in the European Championships with France. Heading into the Southampton game, he’d only trained with his new team-mates for a few days, let alone had a full pre-season to bring his fitness levels up and acclimatise to his new surroundings. 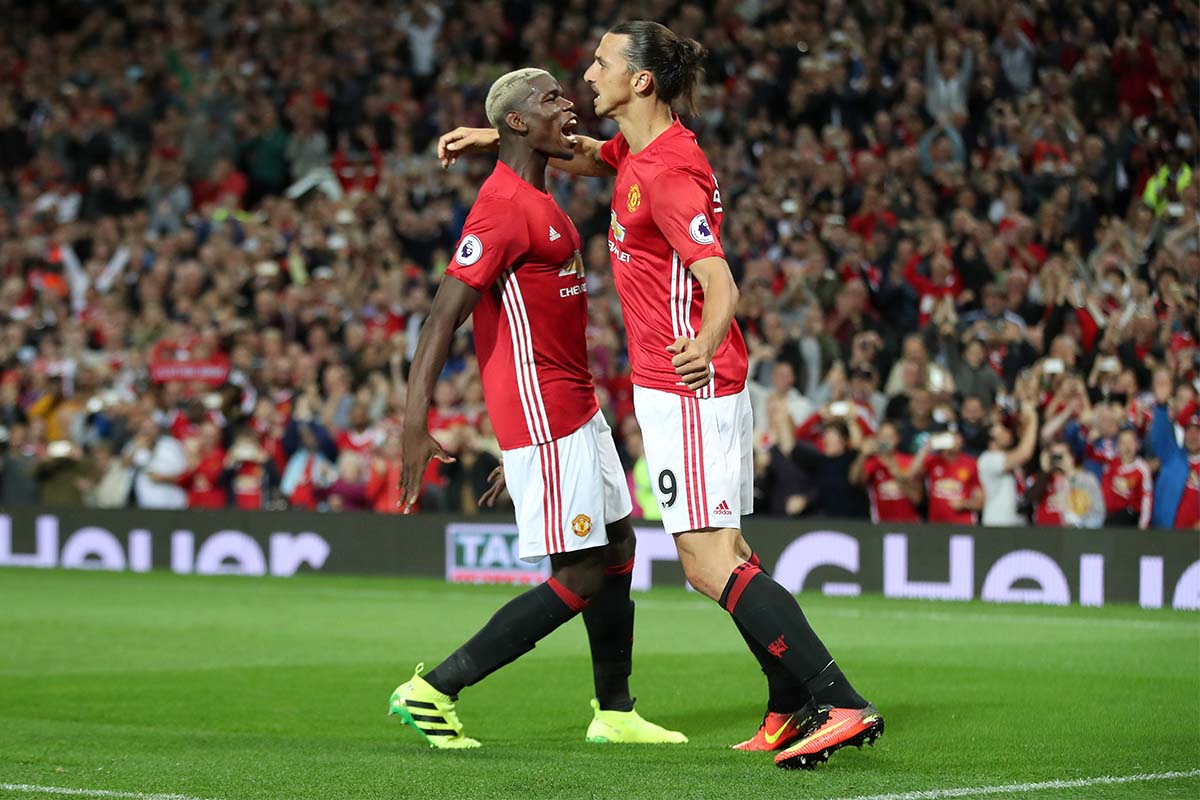 Many observers expect super-human feats from the world’s best paid and most expensive footballers, but Lionel Messi and Cristiano Ronaldo are the exception, not the rule.

And, if those occupying elevated positions within the Manchester United hierarchy were honest, they’d admit that the figure they paid for Pogba was as much a reflection of his marketing potential and the player he can eventually become, rather than the player he already is; there’s still room for growth within his game.

But even so, Pogba’s performances have been of a consistently high level for several weeks now, despite the fact that the team as a whole is underperforming and he has spent much of his game time in positions that do not suit his style and skillset.

Often deployed deep in a double-pivot, Pogba’s attacking instincts and creativity have been stifled by increased defensive responsibility. He has also spent some time in the number 10 position — a role for which he is equally unsuited.

But despite the position shifting, Pogba is still outperforming his team-mates by most metrics. He has completed more passes than any other United player (923), completed more dribbles (40) and created more chances (31).

Critics have bemoaned his lack of assists to date, with the deadly accurate lofted pass which led to Zlatan Ibrahimovic’s equaliser against West Ham United last weekend his first of the season. But, with a more than healthy return of chances conjured, Pogba’s assist stats would be in a much healthier state were it not for the profligacy of his colleagues — United currently rank 18th among Premier League teams when it comes to chance conversion, requiring an average of 9.1 opportunities for every goal they score.

Pogba has also built a strong understanding with fellow summer signing Zlatan Ibrahimovic, with the pair combining to create 16 chances for one another — a better return than any other duo in the division. But with the Swede’s shots-to-goals ratio up at 9.1 — much higher than the likes of Diego Costa (4.8), Sergio Aguero (5.4) and Harry Kane (4.1) — their relationship has yet to yield the amount of goals that United fans would have been hoping for before the start of the season.

The Red Devils’ number 6 is also bettering most of his metrics from last season too. Much like United this term, Juventus endured a difficult start to their 2015-16 domestic campaign but, with Pogba as a key creative outlet — finishing with a league-high 12 assists — they rallied to retain lo scudetto while also winning the Coppa Italia. The Frenchman is currently averaging an 86 percent pass completion rate, up from 83 percent last season, while improving his chances created per game to 1.91 from 1.61 and interceptions per game up to 1.5 from 1.3.

If Pogba is to continue to thrive at United and develop into the player they hope he can become, Mourinho must construct his side with the express aim of fully utilising his record signing’s talents.

Too often this season Pogba has been forced to occupy a role that he is not best suited to in order to accommodate the selection of other, less gifted players. At Juventus, he found his groove while playing on the left of a midfield three in a 3-5-2 formation, and Mourinho must do his best to recreate a similar milieu for the 23-year-old at Old Trafford.

Now, Mourinho has never utilised a back three and nobody expects his to do so. But a 4-3-3 with Pogba on the left, Michael Carrick mirroring Andrea Pirlo’s role of deep-lying playmaker — or regista, as it’s known in Italy — for the Bianconeri, and with Ander Herrera offering energy on the right, United will allow their world record investment to reach his full potential. 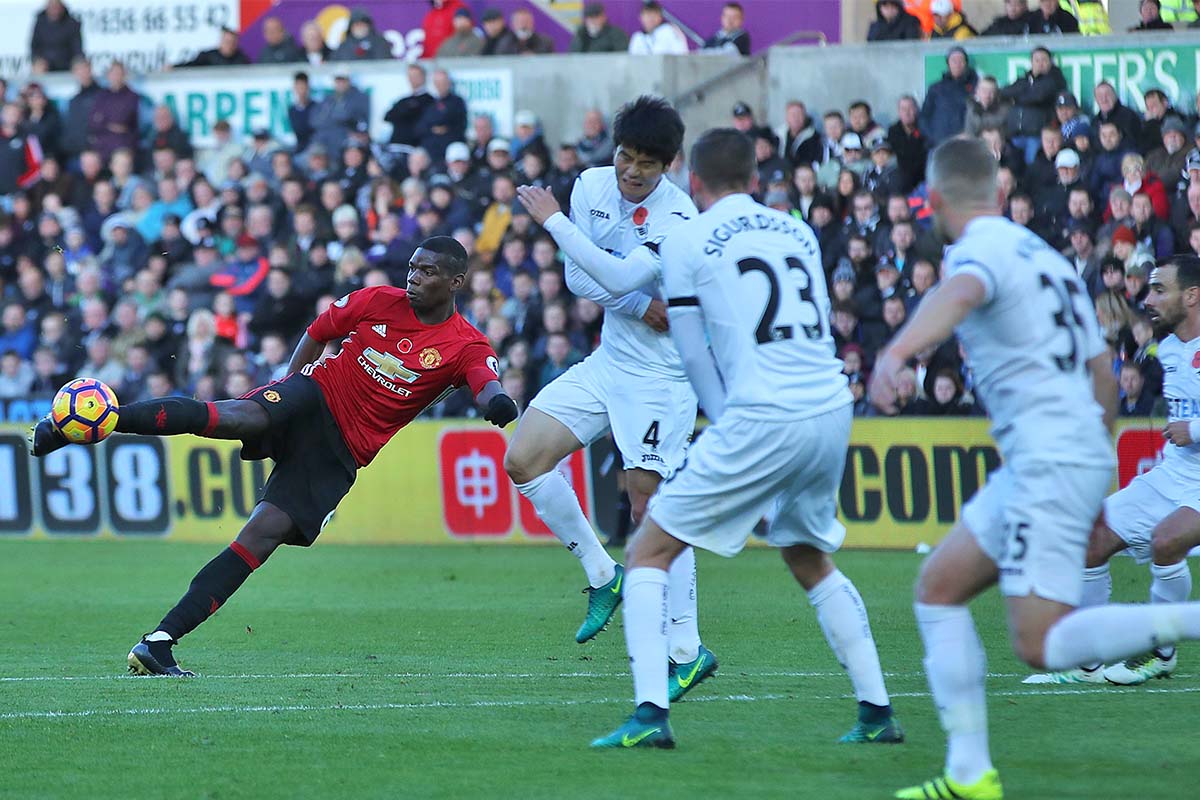 To his credit, Mourinho has used this formula of late, but often reverts to a 4-2-3-1 when playing at home against inferior opposition, feeling that he can cram an additional attacker into his line-up without having to worry about Pogba’s defensive contribution from deep.

Pogba has grown into his role at United, and appears to be adjusting to the increased spotlight and scrutiny that inherently comes with being the world’s most expensive player.

The notion of value in football is relative; the budget United set aside for Pogba’s acquisition takes into account far more than simply his ability to perform on matchdays, making any argument about where else they should have spent the money completely redundant.

But, so far, Pogba is proving his worth in the only way he can control: with consistently excellent performances out on the pitch.