Harry Kane. Dele Alli. Toby Alderweireld. Those three are the usual suspects whenever anybody is asked to name Tottenham Hotspur best players. When he’s on form you can probably add Christian Eriksen to that list. While it’s easy to make an argument for each of them as to why they’re the best it doesn’t necessarily mean they’re the most important Spurs player. That title belongs to Mousa Dembele.

The 29-year-old quietly goes about his business at the heart of the Spurs midfield and is widely regarded as one of the best box-to-box midfielders not only in the Premier League but in all of Europe.

It’s the fact everything he does seems effortless that more isn’t made about how good of a player he is. Spurs are regularly praised for how good their defence is and the plaudits go to the centre-back pairing of Toby Alderweireld and Jan Vertonghen with a special mention going to Eric Dier.

However, the Belgian midfielder is a key man in that solid Spurs defence and he patrols the midfield and shields the backline but because he’s not English it rarely seems to get mentioned to the extent it should.

Dembele seems to have mastered the need for balance in the role he plays. You need defensive discipline but you also can’t be limited when in possession. He knows he needs to support both the defence and the attack. The touch of ingenuity he possesses goes a long way and is what makes him unique.

Against Chelsea – a well drilled, well organised and an absurdly disciplined side – it was a touch of class from Dembele which finally broke down a team that hadn’t conceded a goal for over 600 minutes in the Premier League. A lot of praise was directed the way of Christian Eriksen for his rasping left footed effort that caught Chelsea ‘keeper Thibaut Courtois cold but at the centre of it all was Dembele. 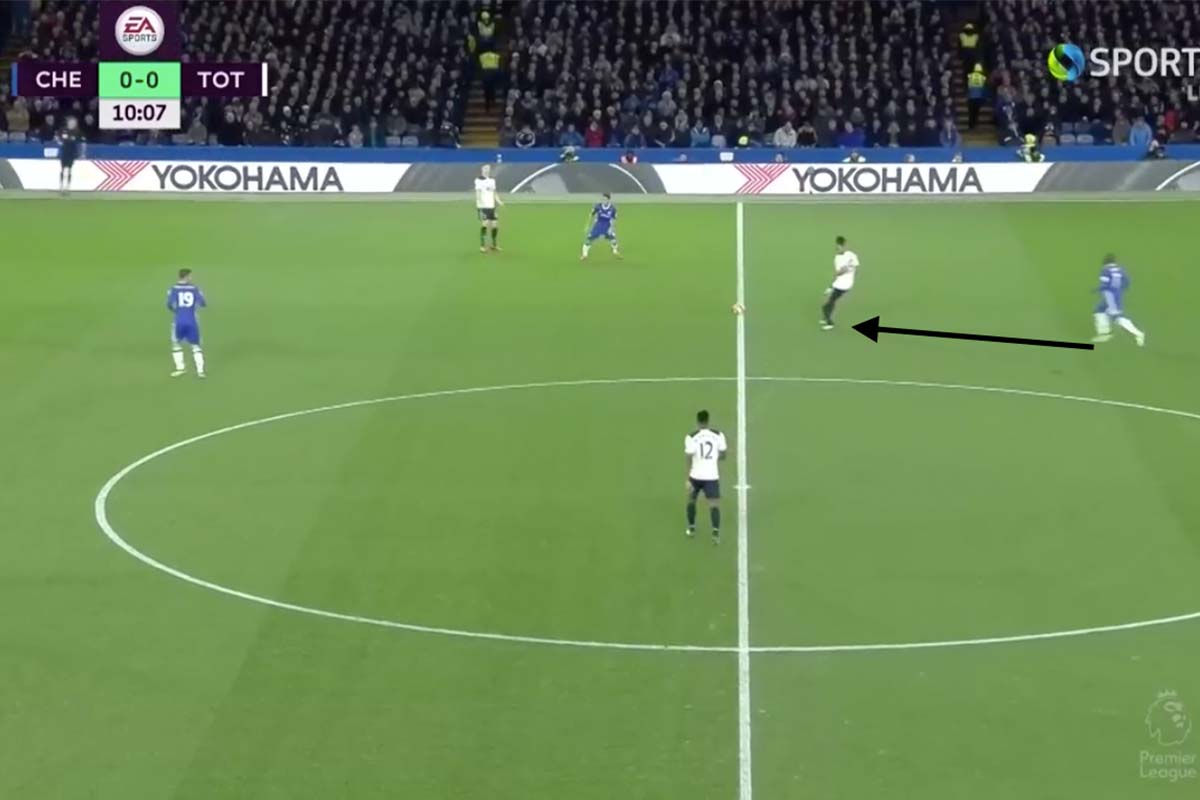 In the picture above the ball is just about to reach Dembele and Kante is already on the move to close him down. Costa and Pedro are both in close proximity to him too meaning if Kante wins the ball back here the home side can break. 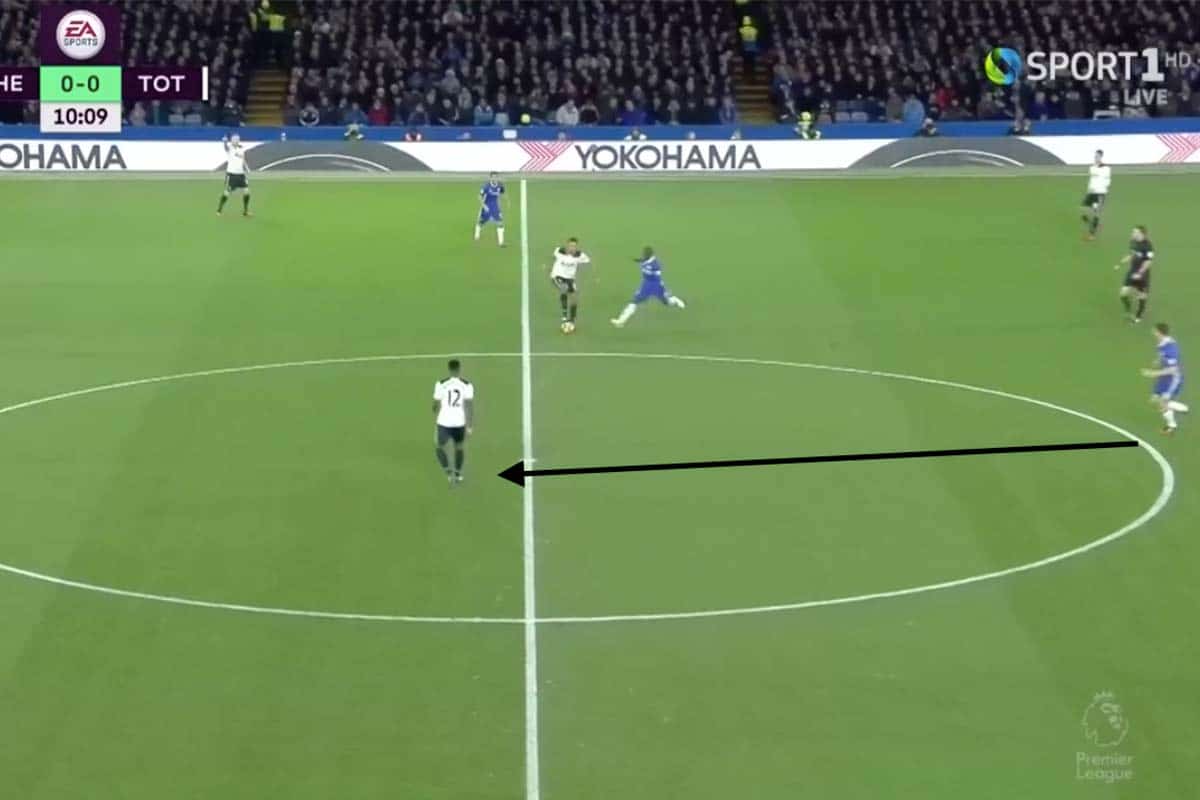 In this picture we see Dembele has looked to move the ball on but Kante is still close by and Pedro is looking to come over to put even more pressure on the Belgian. Wanyama is in space but now Matic is closing in on him to cut off the eventual pass or put pressure on him when he does receive the ball. 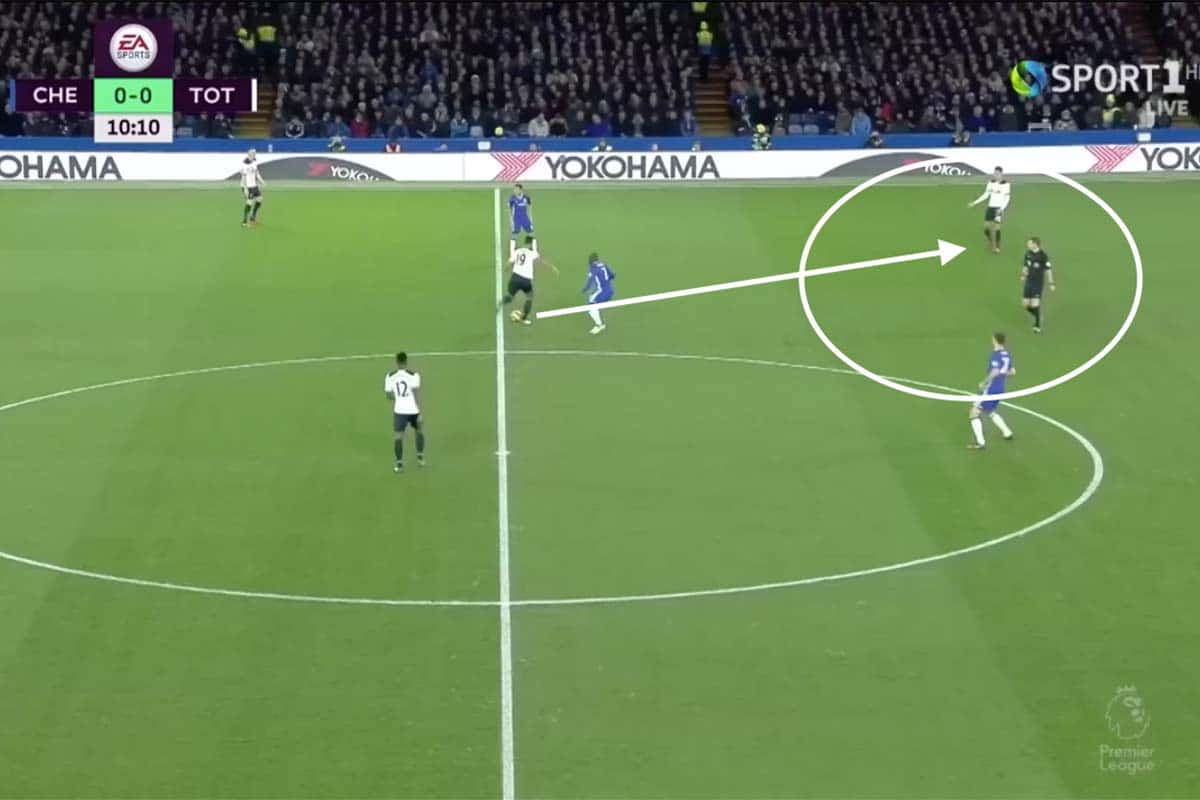 All it takes from Dembele is for him to roll the ball behind him and turn on it and he’s able to pass to Alli, who is circled in white, after the Spurs number 20 dropped off into space knowing Victor Moses couldn’t track him because Heung-Min Son was advanced on the Spurs left. Without that little spin from Dembele Alli’s clever positioning would’ve gone to waste as the ball would never have reached him. 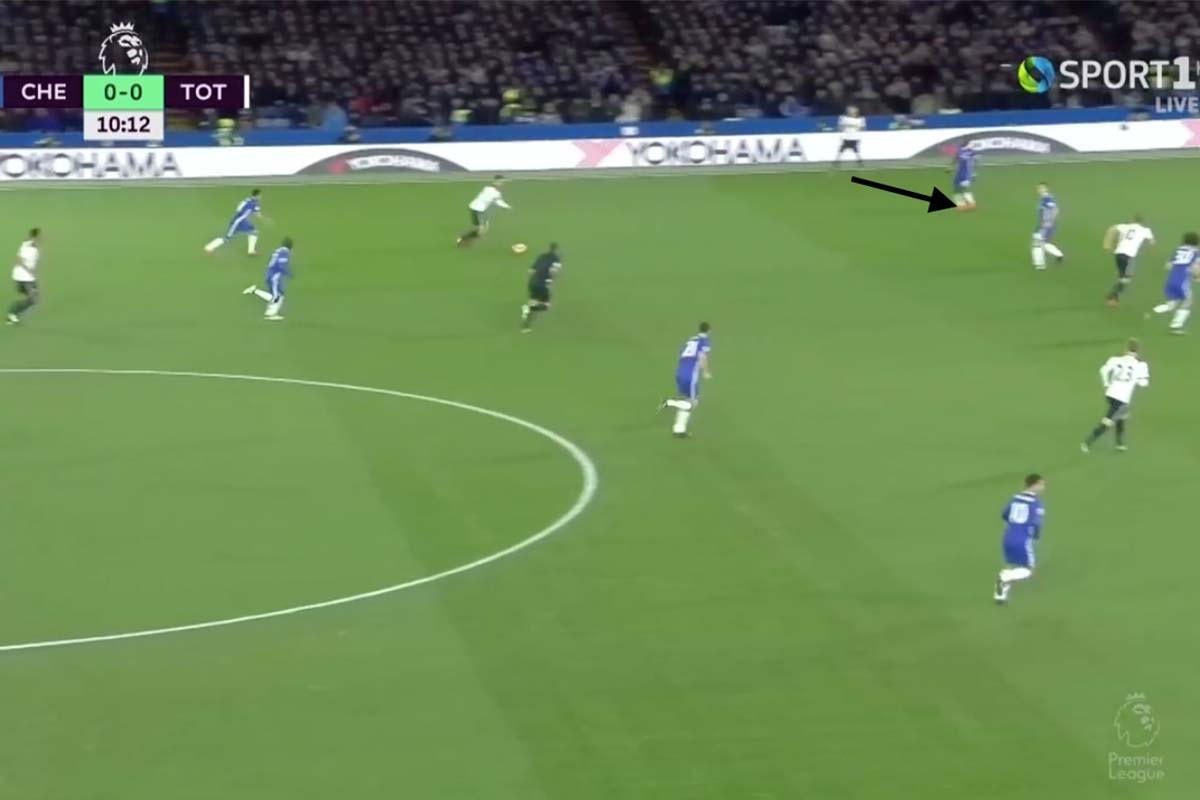 That pass to Alli gets Spurs in behind the four man midfield of Chelsea and they’re able to run at the Chelsea back five. Both Alli and Eriksen are in the space in front of the Chelsea backline which is usually dominated by Matic and Kante. Spurs suddenly have a 5 v 5 situation (with Walker on the right just off screen) and the Chelsea defence looks a little stretched. 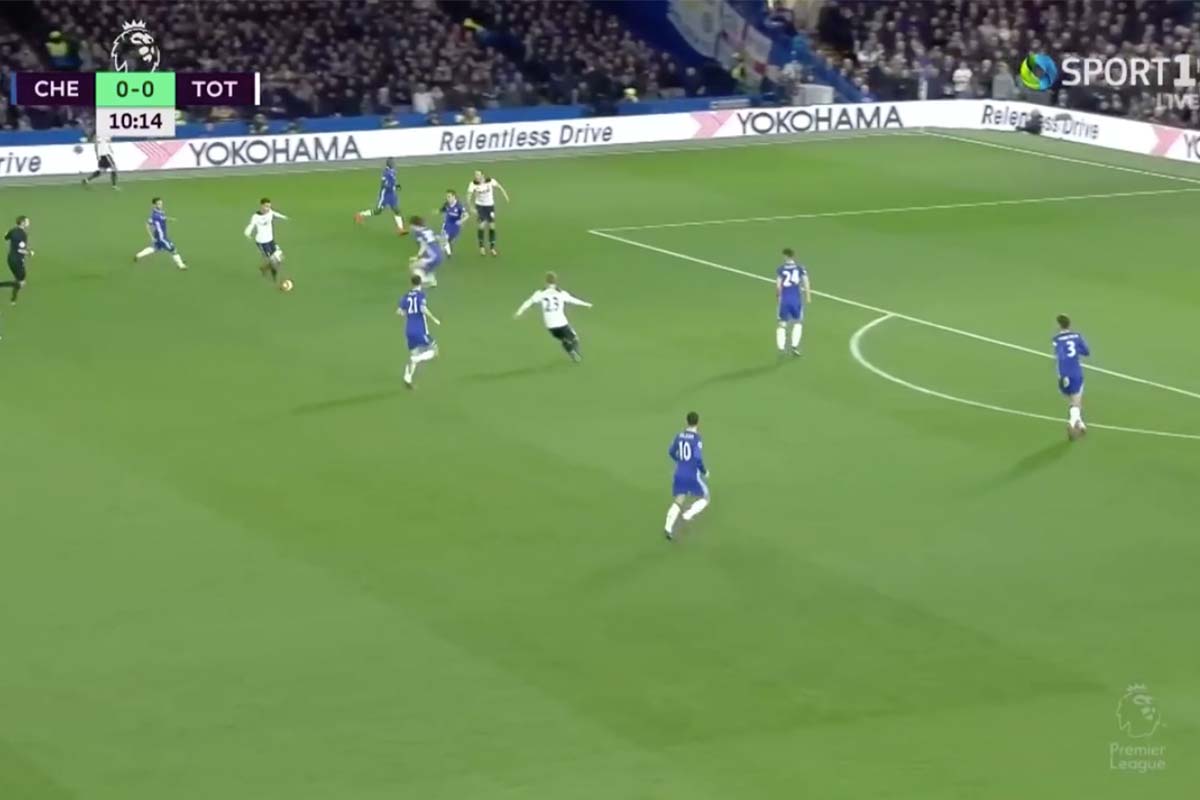 Son and Kane occupy Moses and Azpilicueta and David Luiz, the man playing in the middle of the back three, is forced to push out to shut Dele Alli down. This makes space between the right centre-back and the left centre-back. Alli pokes the ball through to Eriksen and the Dane fires home.

That swivel from Dembele opened up the space and Spurs exploited it. 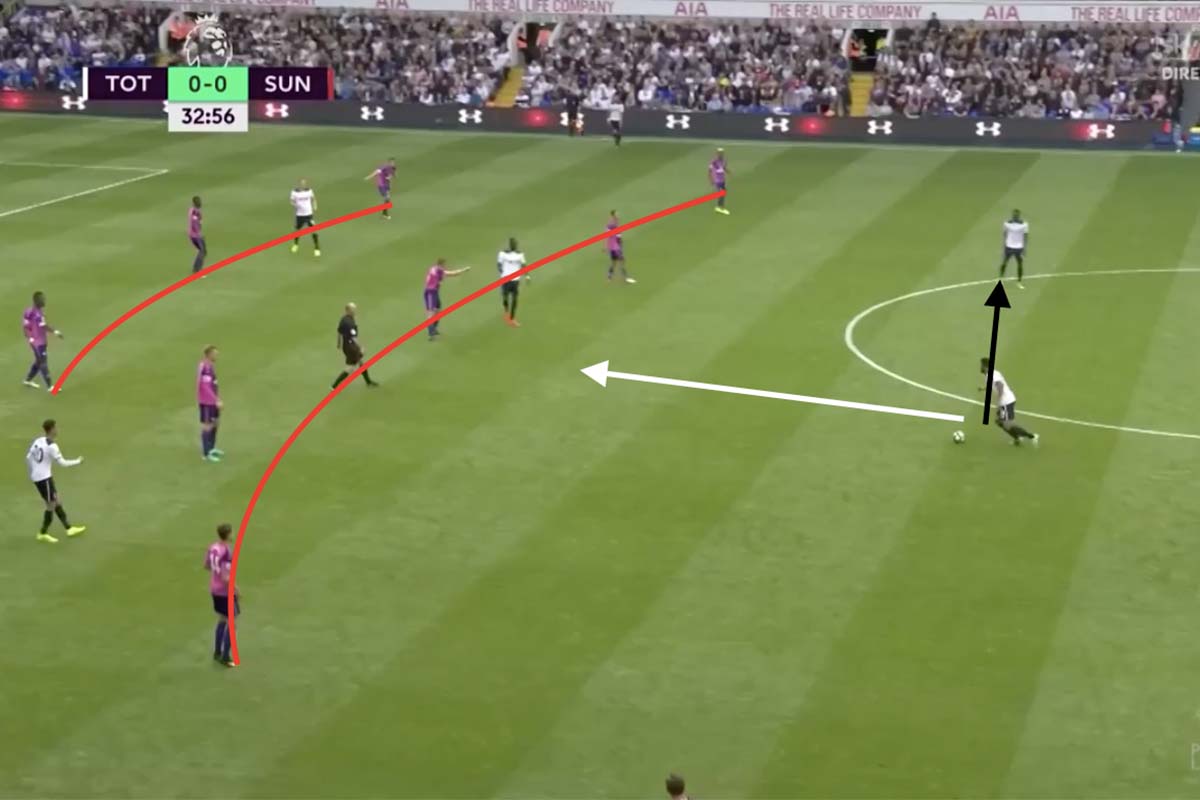 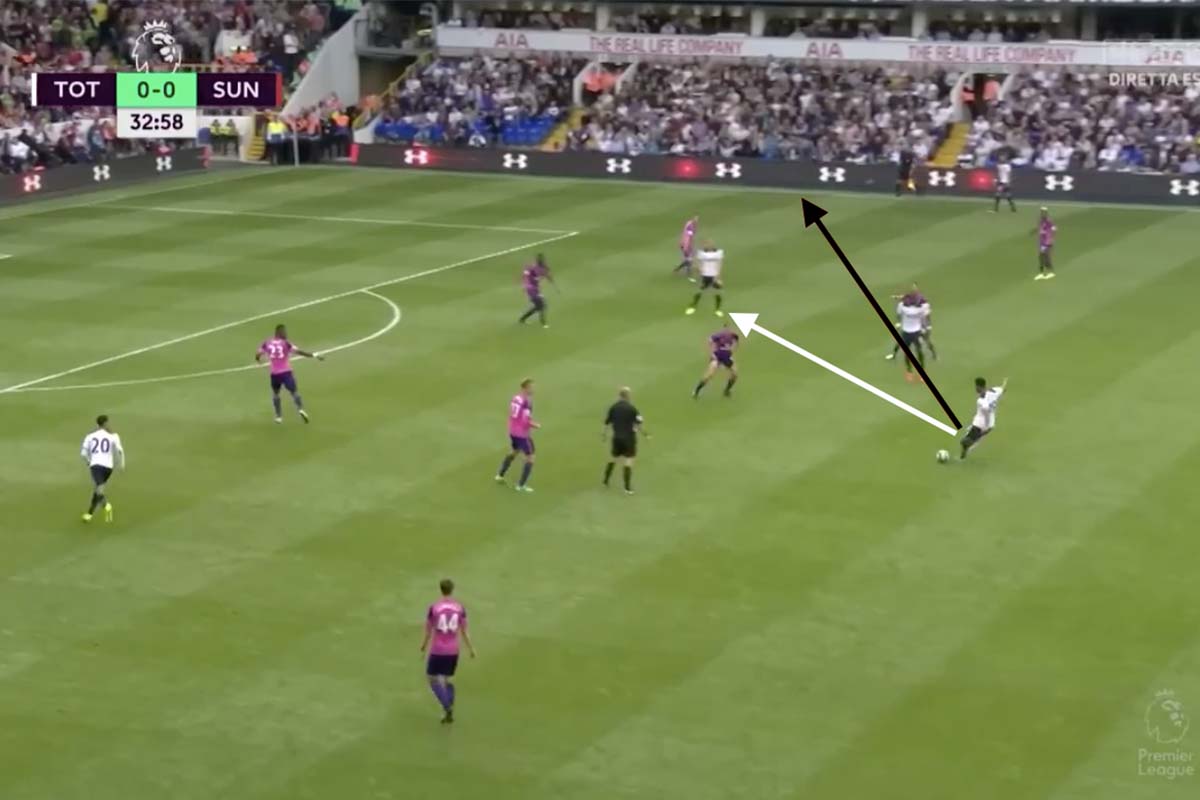 Here is a picture from the match against Sunderland. The compact Sunderland defensive lines are clear for all to see and Dembele is in possession. He could just play a simple pass, marked by the black arrow, as Spurs look to shuffle Sunderland about to carve out an opening. Instead he drives forward. There’s a pass out wide on, and in all honesty it’s probably the pass Sunderland want him to make, but Dembele threads the ball to the attacker. It’s nothing mind blowing or world class but it’s not the sort of risky pass many midfielders would make but at the same time it’s the sort of pass that breaks the defensive lines. You need that in your locker in the Premier League these days. 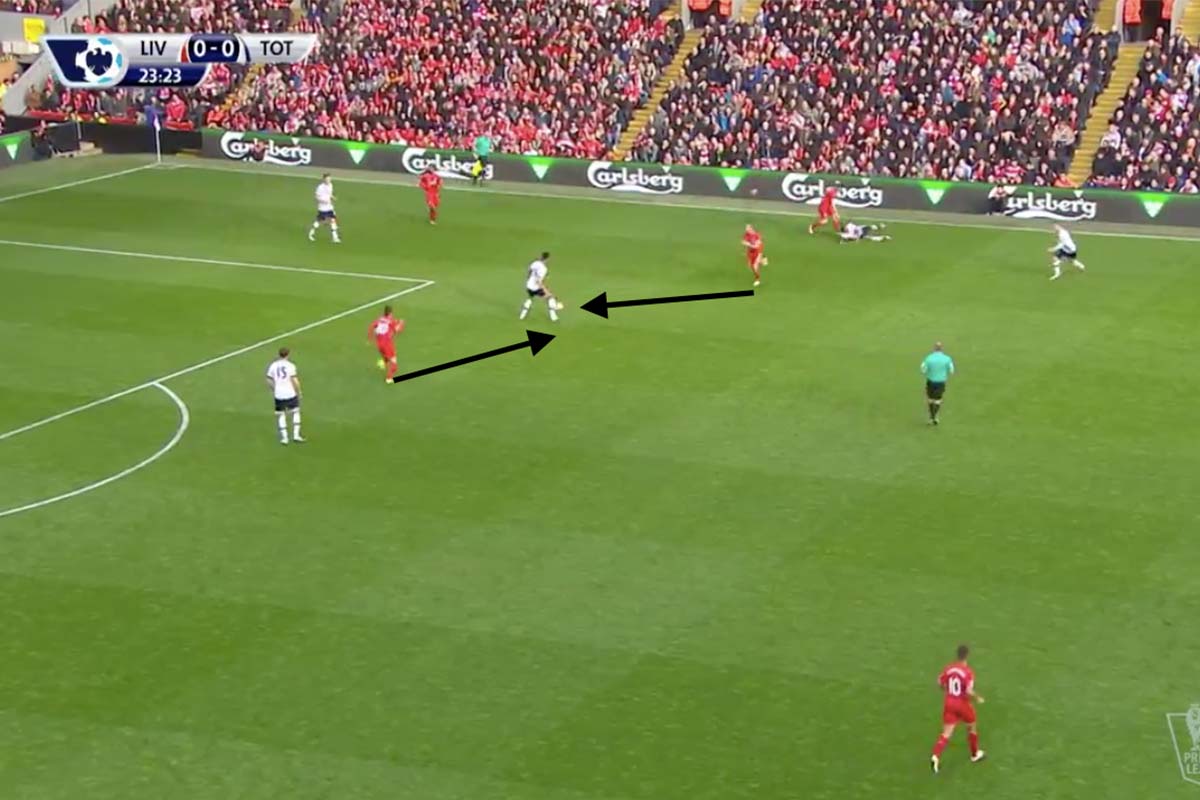 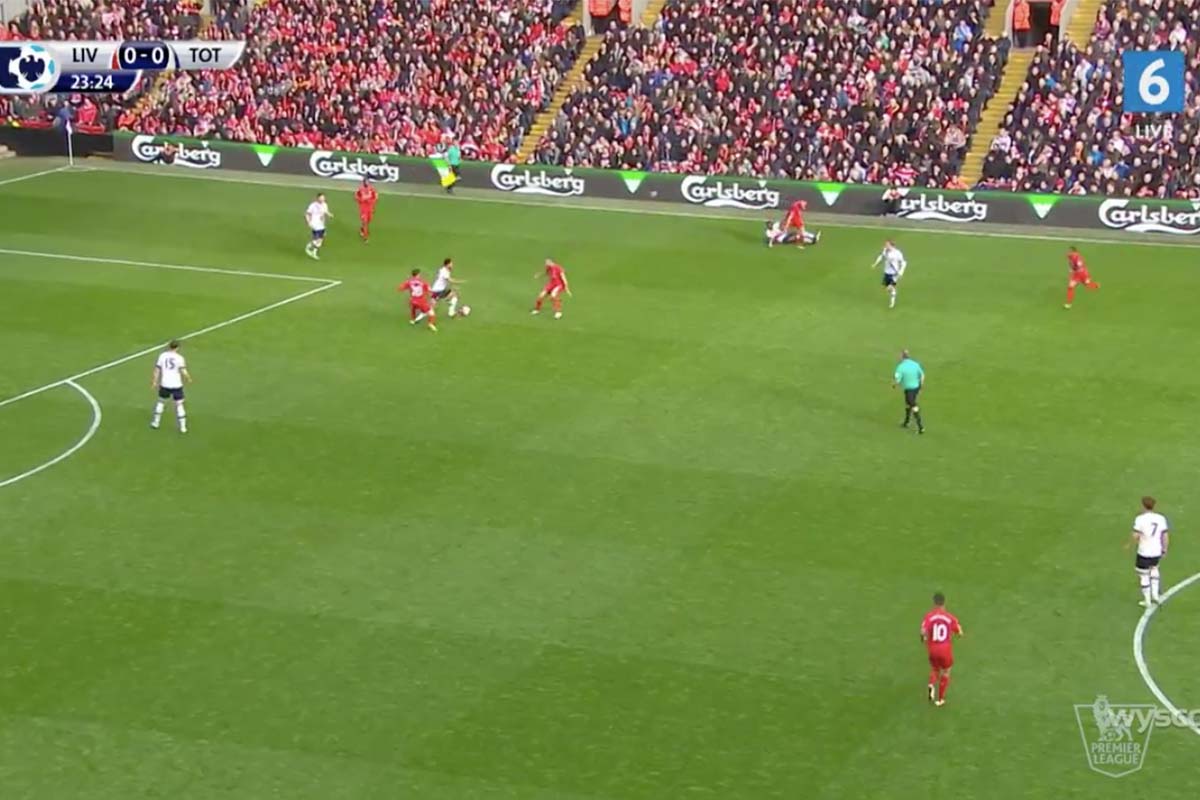 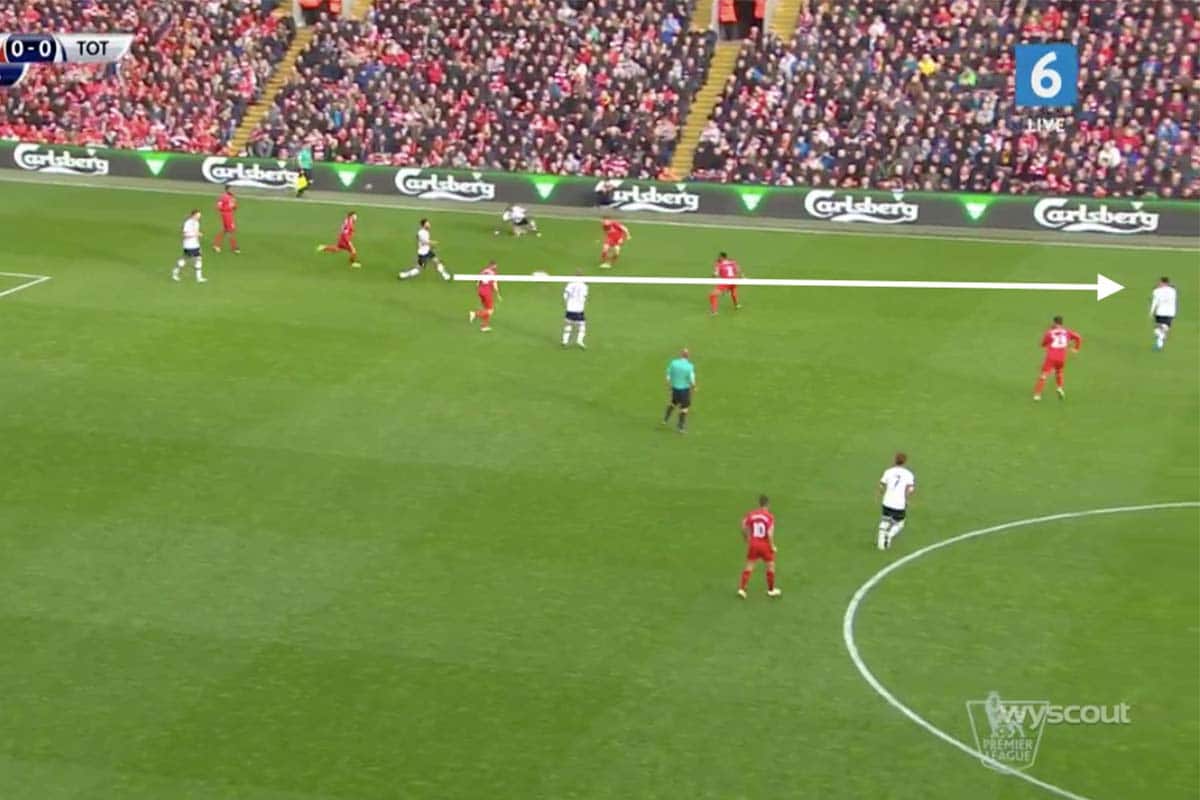 The pictures above are from the Spurs match against Liverpool. In the first picture he receives the ball and both Adam Lallana and Jordan Henderson look to press him to win the ball back in a dangerous position. He avoids the press, dribbles past them and plays a pass into space for the Spurs player to latch onto. It’s a move that takes 7 Liverpool players out of the game and turns defence into attack. He makes it look effortless.

He may not score as often as midfielders are expected to, just the 3 goals and 1 assists in 2015/16, but it’s his all-round brilliance which makes him so special to this Spurs side.

In the 2015/16 season he was averaging 3.6 tackles and 2 interceptions. For context, N’Golo Kante’s stats at Chelsea so far this season read 3.2 tackles and 2.8 interceptions per 90. But Dembele combines that with impressive dribbling – 3.7 successful dribbles per 90 minutes so far this season and 2.9 last season – and great retention of the ball. His stats for 2015/16 and this season combined are 50 passes attempted per match and 90.5 per cent completed.

He’s press resistant, he’s creative and he’s defensively switched on. He’s arguably a £50 million midfielder and he rarely get’s the credit he deserves.

Keep up to date with the latest Spurs transfer rumous