Aitor Karanka surprised many during the 2015/16 season by guiding Middlesbrough to Premier League promotion.

The foundations for their rise up a division appeared to be built on a disciplined and well organised set of players who followed the instructions given to them to a tee. Karanka’s side had the best defensive record in the Championship, conceding just the 31 goals in 46 matches.

Many thought it would be difficult to replicate in the Premier League but Boro' have adapted to life well, and before the 3-0 loss at the hands of Liverpool only Chelsea, Spurs and Southampton had conceded fewer goals. What’s even more remarkable is the fact they have conceded just the two goals in matches against free-scoring Arsenal, Manchester City and Chelsea.

While this defensive record is one to be admired it’s still not perfect and Boro', through lack of concentration, have conceded soft goals this season which have cost them points. Many will find it an odd observation given the praise that’s been coming their way, but if they are to be an effective defensive side they can’t afford those lapses. If you don’t concede then you can’t lose, but if you don’t score you can’t win. It’s a balancing act that very few promoted clubs can perfect.

When thinking abou who the North East side should be looking at in January, it comes down to what’s more cost effective – a 15/20 goal a season striker or a centre-back suited to your system. More often than not, for mid-table teams anyway, the latter comes up trumps. With this in mind, Boro should reignite their interest in Sevilla defender Timothée Kolodziejczak. His defensive quality could be what turns losses into draws and draws into wins. 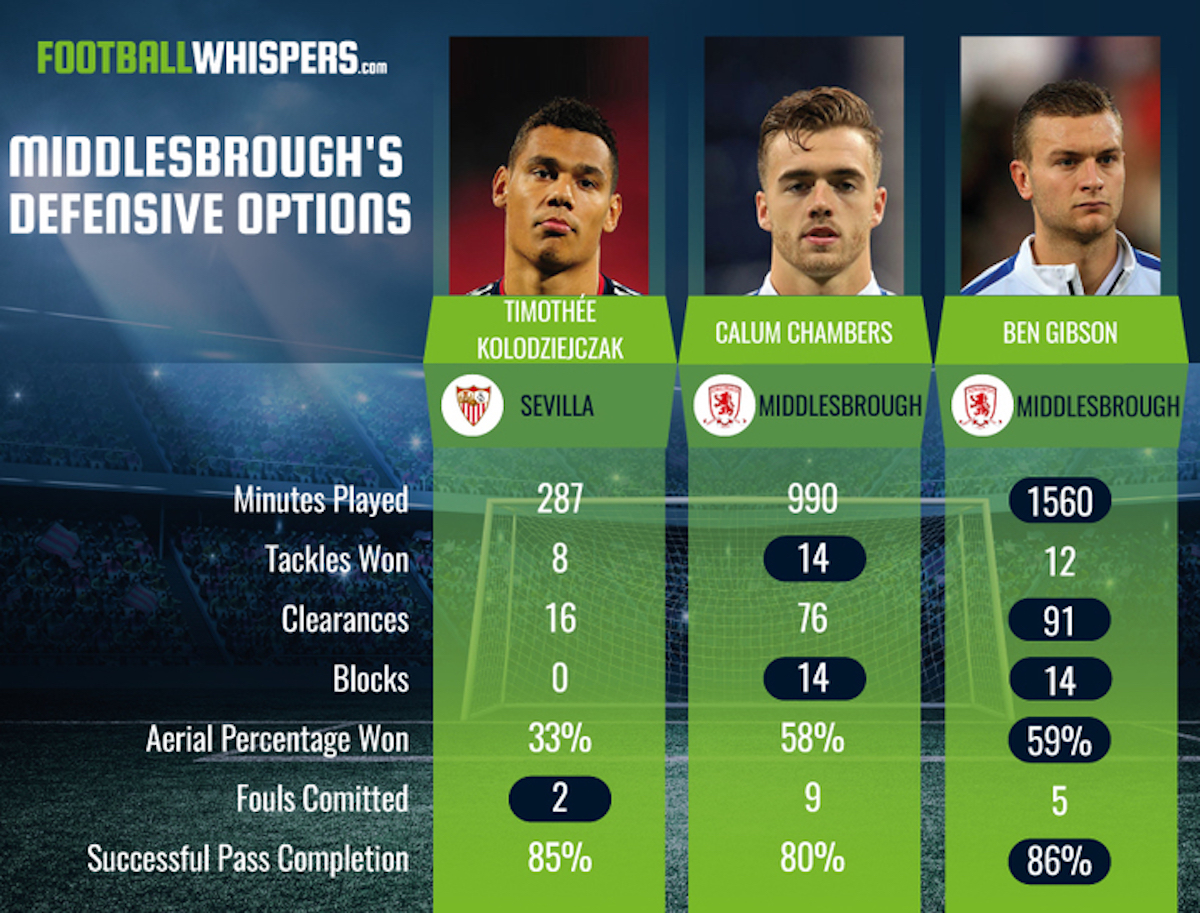 The 25-year-old was a target in the summer, but ultimately turned down a move to both Boro' and Swansea because he was happy at Sevilla and determined to play European football. However, the arrival of new boss Jorge Sampaoli has seen his playing time cut and the player recently hinted at frustration in an interview.

“I’ve had some great times with this club, I’ve discovered another culture, and honestly it’s easy to adapt to this city and this club. I played 50 games last season, but today things are different.”

With limited playing time on offer the powerful defender may look to move somewhere in January, initially on loan perhaps, to put himself in the shop window.

The versatile Frenchman is primarily a centre-back but can also play at left-back. If Karanka wanted to get creative though, he could opt to use him as a defensive midfielder — in the short-term at least. If the club manage to convince him to join permanently he could then revert back to his normal centre-back position when Chambers returns to Arsenal or if highly rated Ben Gibson moves on.

For now though, he could act as a midfield protector. Both Adam Forshaw and Adam Clayton have done well in midfield, and both execute Karanka’s game plan, but the pair have some limitations as you’d expect. Using Kolodziejczak as a deep midfielder wouldn’t be in place of the those two, but as a supplement to the pair. 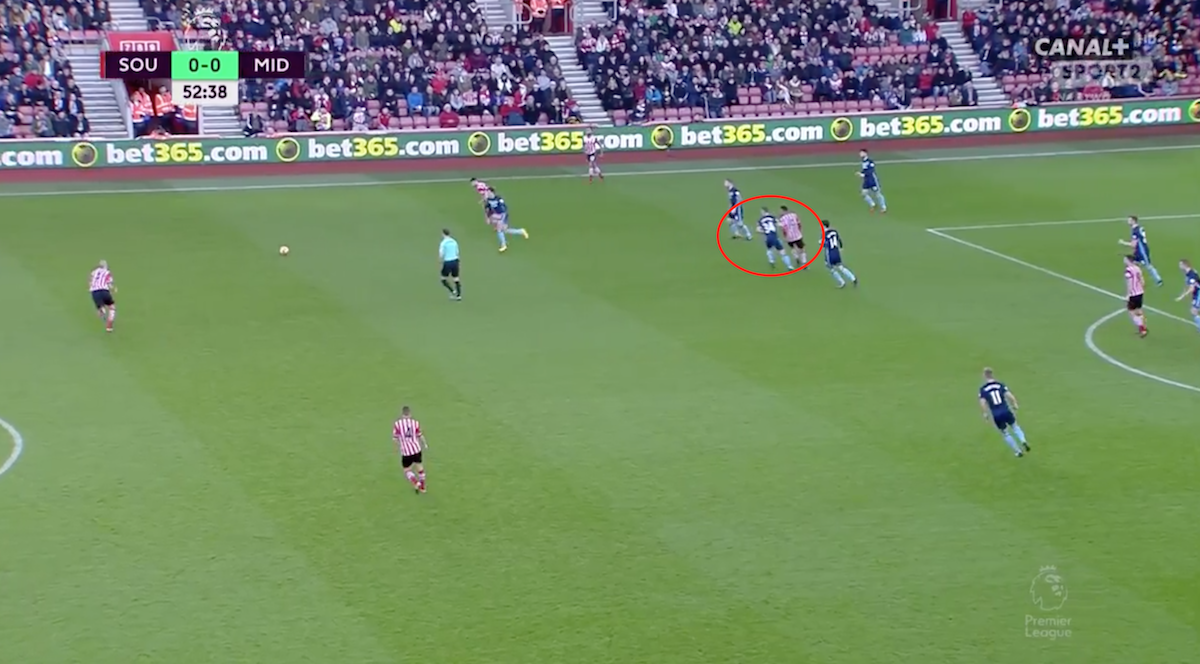 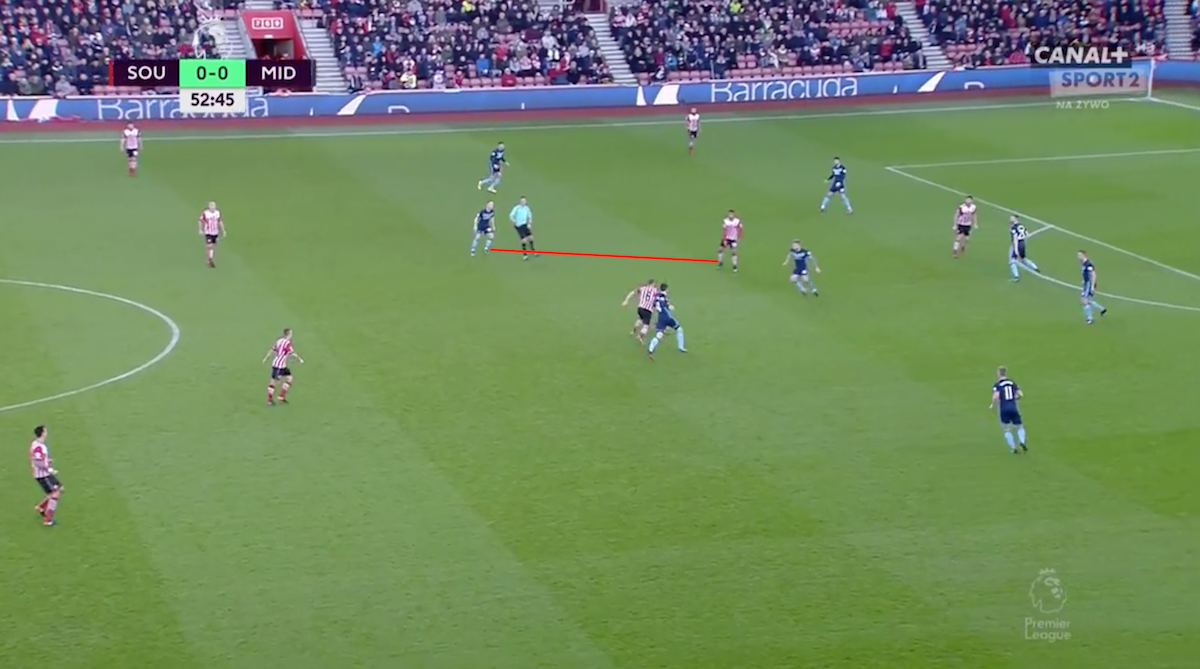 In the above two pictures, taken from Boro’s 1-0 defeat to Southampton, you can see Adam Forshaw marking Sofiane Boufal. Initially the Boro man tracks Boufal but then, after Boro repel the attack, the midfielder starts to ball watch and leaves the Southampton attacker. Adam Clayton isn’t able to get close to Boufal as he has to engage the man on the ball running at the defence.

The ball finds it’s way to Boufal who is able to turn and score before a Boro midfielder is able to get a block in. 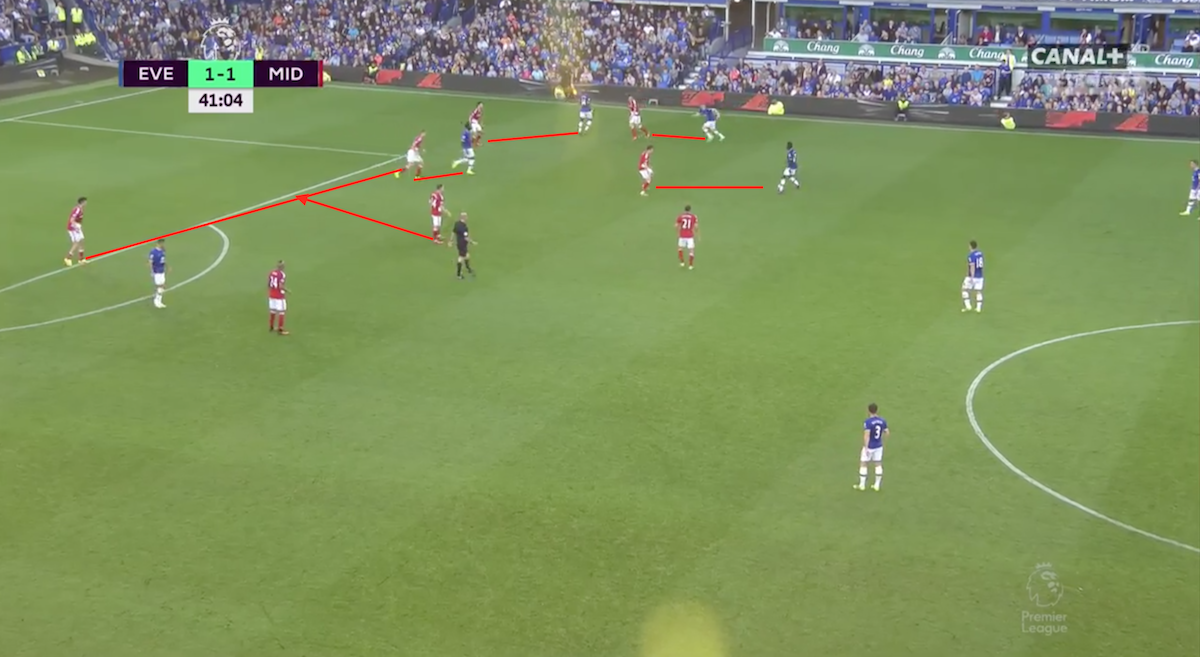 This picture is from the 3-1 loss at the hands of Everton.

As you can see it’s 4 v 4 on Boro's left-flank, and the centre-backs have been stretched due to the movement of the Everton players. 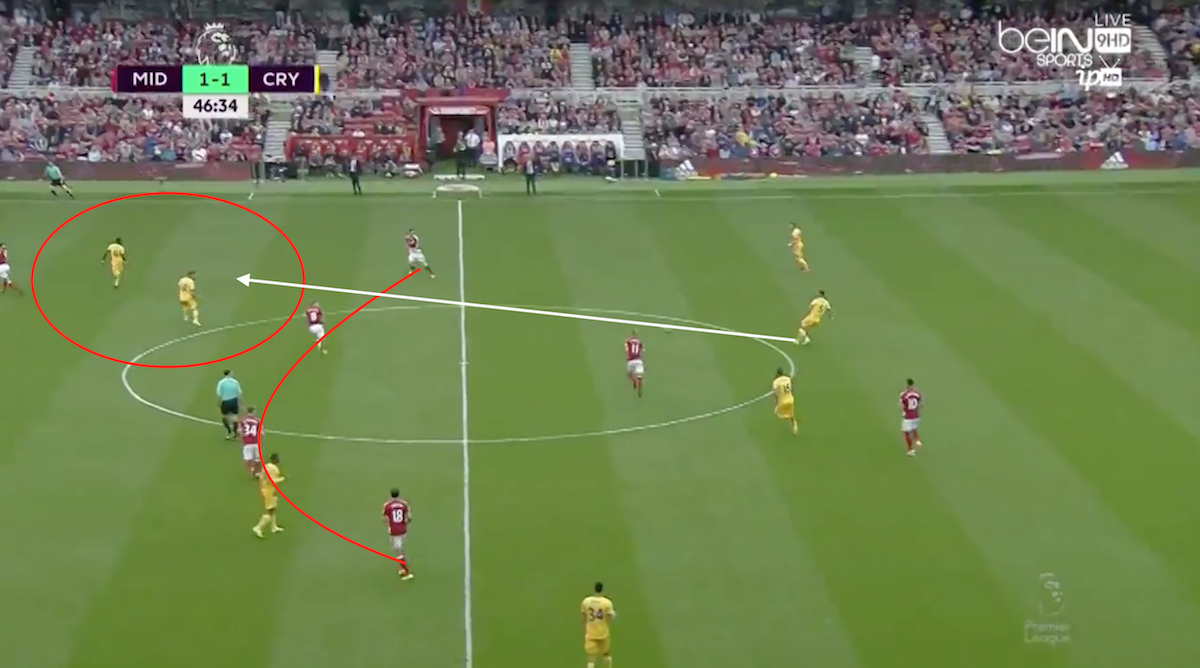 Above is a picture taken from Boro’s 2-1 defeat to Crystal Palace.

It’s a pass from a Palace centre-back which takes the Boro' midfield out of the game and gets Palace in behind. It leads to a goal, and for a manager like Karanka it must be terribly disappointing to see a straightforward pass like that get the opposition in at your defence. The passing lane wasn’t blocked off by the Boro midfielders and the man on the ball wasn’t pressed.

Three lapses in concentration above played a part in three defeats for Middlesbrough. It’s never as basic as that, but had Boro' managed to turn those defeats into draws they would now be sat in 13th position in the Premier League. Instead, they’re in 16th and just three points above the relegation zone.

Kolodziejczak started life at Lyon but moved to Nice in 2012/13. He played 70 Ligue 1 matches for the French club before moving to Sevilla in the summer of 2014, and played a part in their proceeding two Europa League triumphs.

The player has averaged 2.1 tackles and two interceptions per 90 minutes over the past four seasons. He’s consistent in the figures he posts. He attempts 42 passes and completes 79.6% of them. Again, he’s been consistent in both Ligue 1, La Liga and Europe. Transitioning to England shouldn’t be an issue. 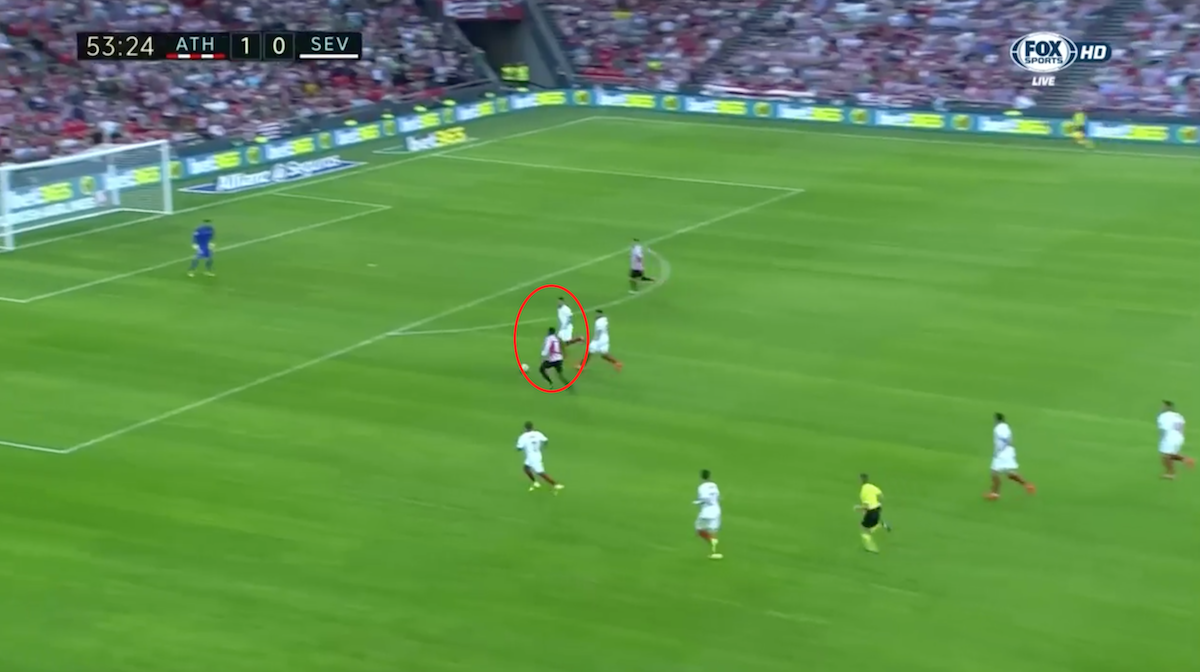 Kolodziejczak is disciplined, he’s intelligent and he’s diligent. In the pictures above he’s playing the left-back role, but he tracks the run of the Bilbao player to the other side of the pitch and doesn’t hand off responsibility. He doesn’t switch off and he’s always in control. He wins the ball back in the penalty area, plays it to a Sevilla player and makes his way back to his left-back role. 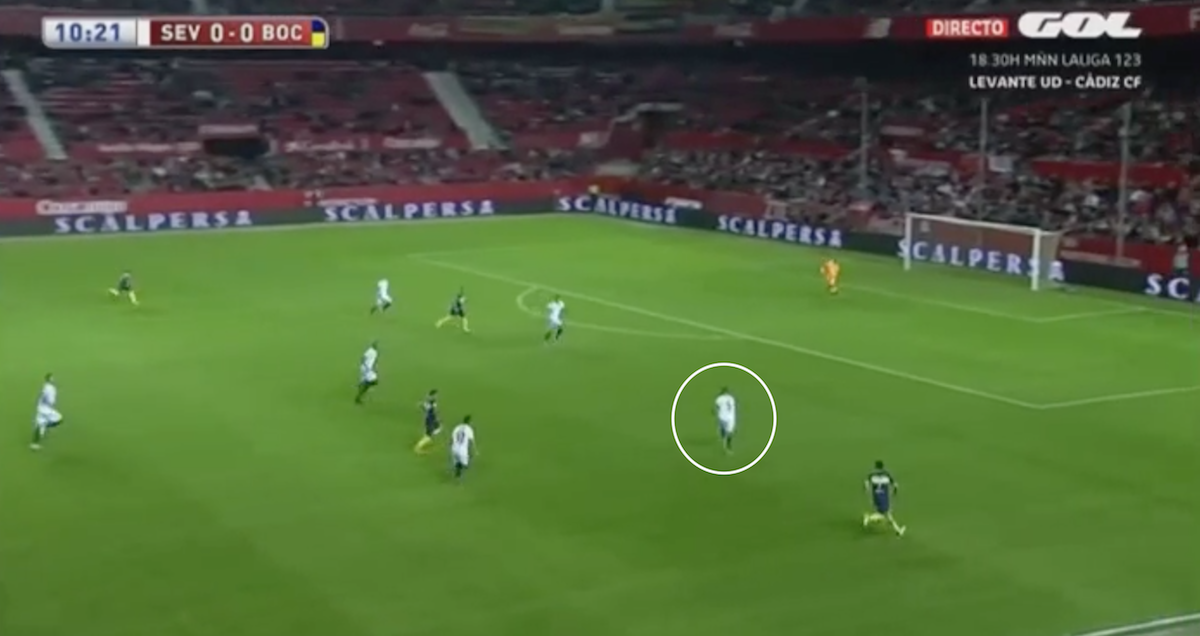 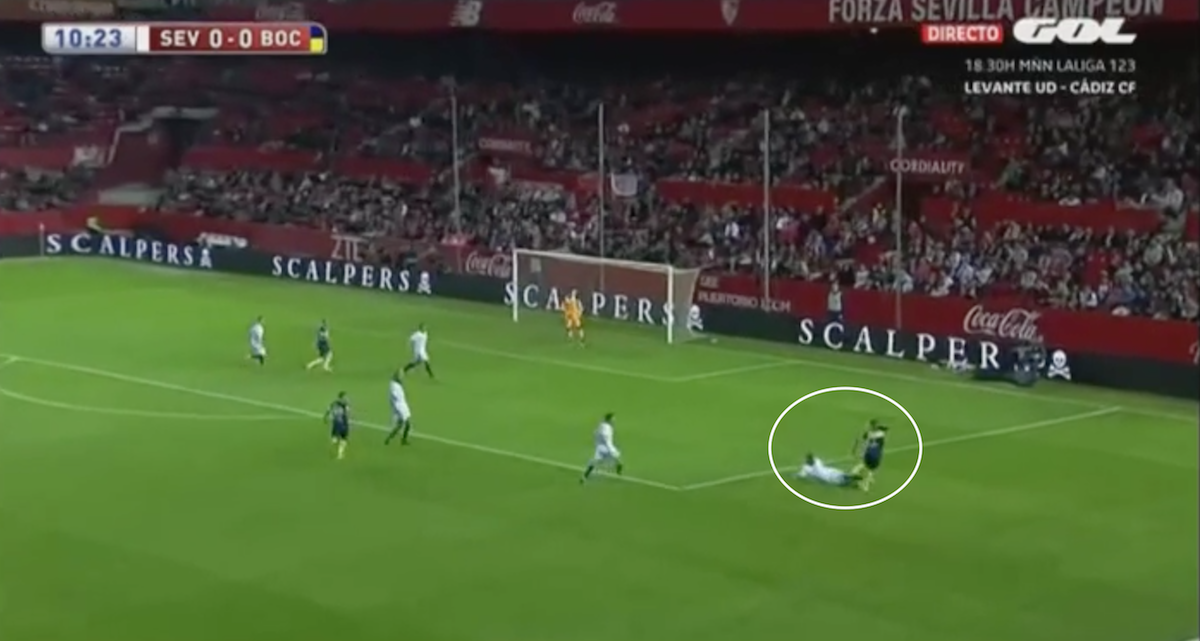 In the above two pictures you get to see Kolodziejczak’s ability to recover. In the first picture he holds his position and forces the man to play the ball to the man on the Boca right. He then makes up the ground, winning the ball back with a slide tackle before calmly passing it to a Sevilla midfielder. 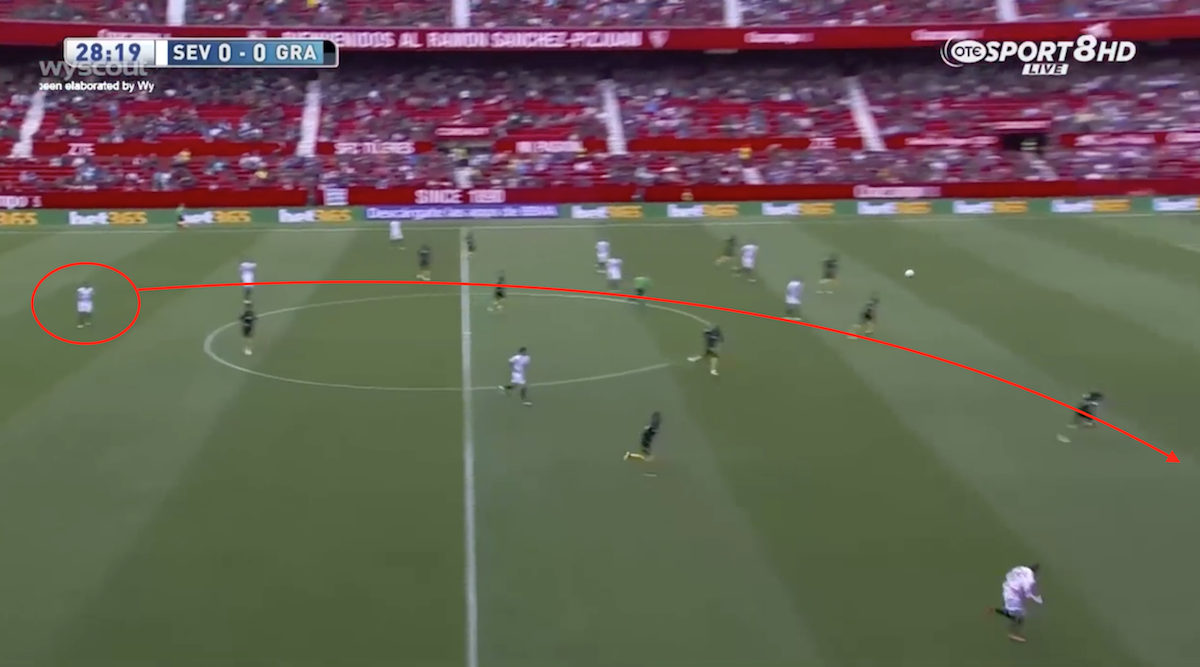 Boro' like to play a counter attack style at times and having the ability to pick a pass from deep areas of the pitch is integral to this. If a player has the ability to not only spot a pass but execute it, it can create chances out of nothing.

In the above picture Granada are playing a reasonably high line. They’ve pushed up onto Sevilla. They look set but then Kolodziejczak plays a diagonal ball from deep into the space and Sevilla turn the opposition around and gets Sevilla on the attack.

Such a quick transition from defence to attack would suit Middlesbrough, particularly the likes of Alvaro Negredo and Gaston Ramirez.