Marcus Rashford’s impact for Manchester United in both the 2-0 win over Chelsea last Sunday and the 2-1 win After Extra-Time against Anderlecht was the ultimate indication of José Mourinho’s priorities.

Zlatan Ibrahimović doesn’t do rests, but the Swede sat out against the Blues before picking up an injury in the last minutes of ordinary time against the Belgian side.

The Swede, despite being 35, had played 2437 league minutes this season – only behind world record signing Paul Pogba and de Gea. He is Mourinho’s on-field lieutenant, devout disciple and mouthpiece in the media.

“I will go through this like everything else and come back even stronger,” Zlatan announced via Instagram. “So far I played with one leg so it shouldn't be any problem.”

“One thing is for sure, I decide when it's time to stop and nothing else.”

It's almost impossible to replace the 17 goals that the Swede has provided this term, plus no one takes more shots than the 4.2 Ibrahimovic is averaging per 90 minutes.

So it was a big statement by the United boss to hand Rashford just his sixth start of the Premier League season as United’s out-and-out centre forward against league leaders Chelsea. Notwithstanding the fact Mourinho would have quite liked the chance to get one over his former club for the first time since being sacked last season.

In the event, Rashford did well. He did better than well. He scored United’s opener in the seventh minute, racing onto Ander Herrera’s perfectly-weighted pass and sliding past Chelsea’s stand-in keeper Asmir Begović, to set the Red Devils on their way to a 2-0 win over Antonio Conte’s men.

Afterwards Mourinho was inevitably asked whether the impressive Rashford would be picked ahead of Ibrahimović again.

“For his education, his tactical education and his tactical culture,” Mourinho began. “This is a phenomenal season for him with an amazing range of different experiences.

“Is he scoring enough goals? No, he’s missing a little bit. And, even today, the first opportunity he had he did not score. It looked like he was not very confident.

“But the kid played very well and it was a great experience for him to play against such a good team like Chelsea.”

After that verdict there is little doubt the Wythenshawe-born teenager won't start ahead of Ibrahimović again any time soon. But there is mounting evidence to suggest he should.

Against Anderlecht, the former Barcelona, Inter and Juventus forward was given the nod again, but Rashford was picked out wide. Yet, it was after Zlatan went off injured that the young Englishman made his mark.

Taking place through the centre, he was there to convert Marouane Fellaini's knock-down, firing United into the UEFA Europa League semi-finals.

The importance of the Rashford was clear at the weekend, rested from the starting line-up against Burnley, giving the impression that the Portuguese coach wants him at 100 per cent for Thursday's Manchester derby. 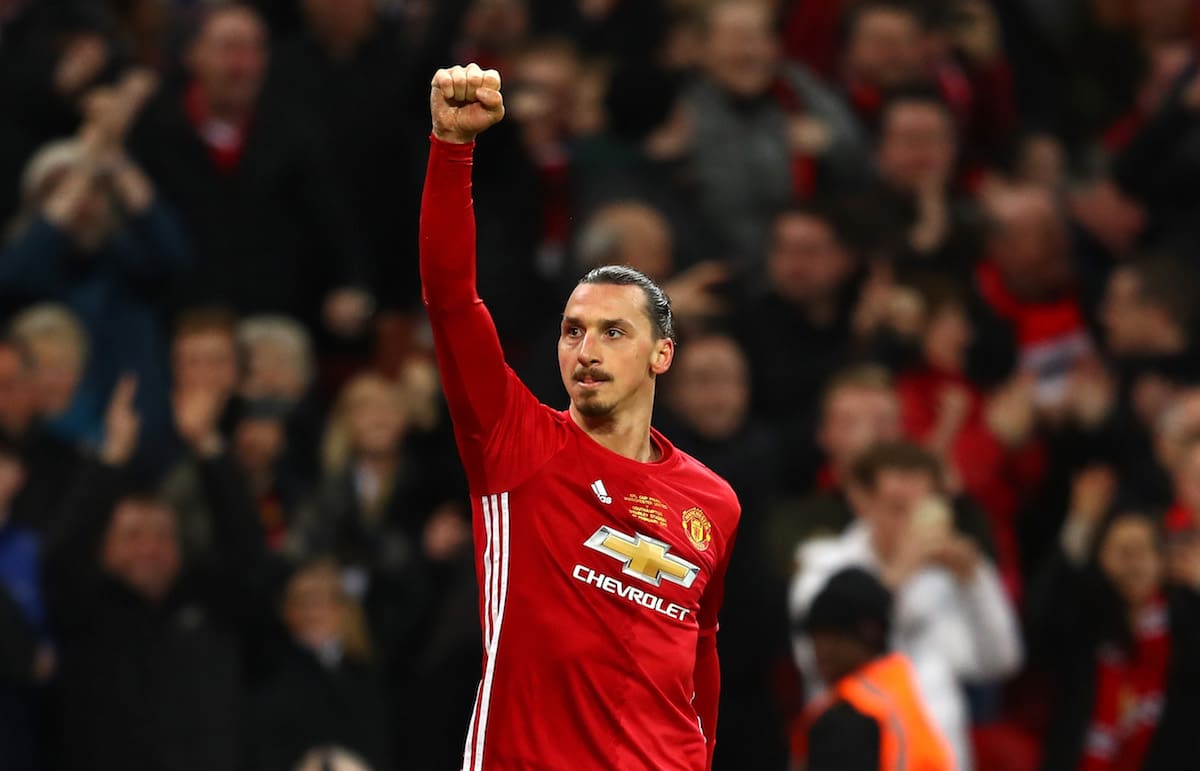 The problem with Ibra

With 28 goals in all competitions and a goal every 143 minutes in the Premier League you could be forgiven for wondering if there is a problem with Ibrahimović. But there is. The former Barcelona, Juventus and Internazionale striker is extremely wasteful in front of goal and limits United's attack.

The Swede has squandered the most ‘big chances’ in the Premier League this season and does not compare favourably to some of the league’s other big hitters when it comes to the number of shots he has to take per goal.

While Ibrahimović is in the United side everything is focused on getting the ball to him. Rashford is pushed out wide, more often than not to the left, and it becomes the Zlatan show. And it’s worked, to an extent.

However, United have become predictable when Ibrahimović plays. While he is good at using his sizeable frame to hold the ball up and bring others into play the aim is always the same: return it to him as soon as possible so he can score.

With 4.1 shots per game he is second only to Manchester City star Sergio Agüero (4.4). Next highest for the Red Devils is Pogba (3.1) with Anthony Martial (1.7) way behind the two big summer arrivals in third.

New kid on the block

But without Ibrahimović that all changed. United only managed three shots on target at Old Trafford – three more than the visitors – but they needed just two to secure a surprise win over their manager’s former employers.

At the heart of that was Rashford. The youngster hit the target with two of his four shots, completed 13 of 15 passes in the attacking third (more than anyone else), attempted more crosses than any other player (6) and completed four of his seven take-ons (also the highest number).

For context, in his last Premier League start against Sunderland the previous weekend, Ibrahimović attempted just one take on and did not complete it. He mustered one incomplete cross and his pass completion was ten per cent lower than Rashford’s (87). 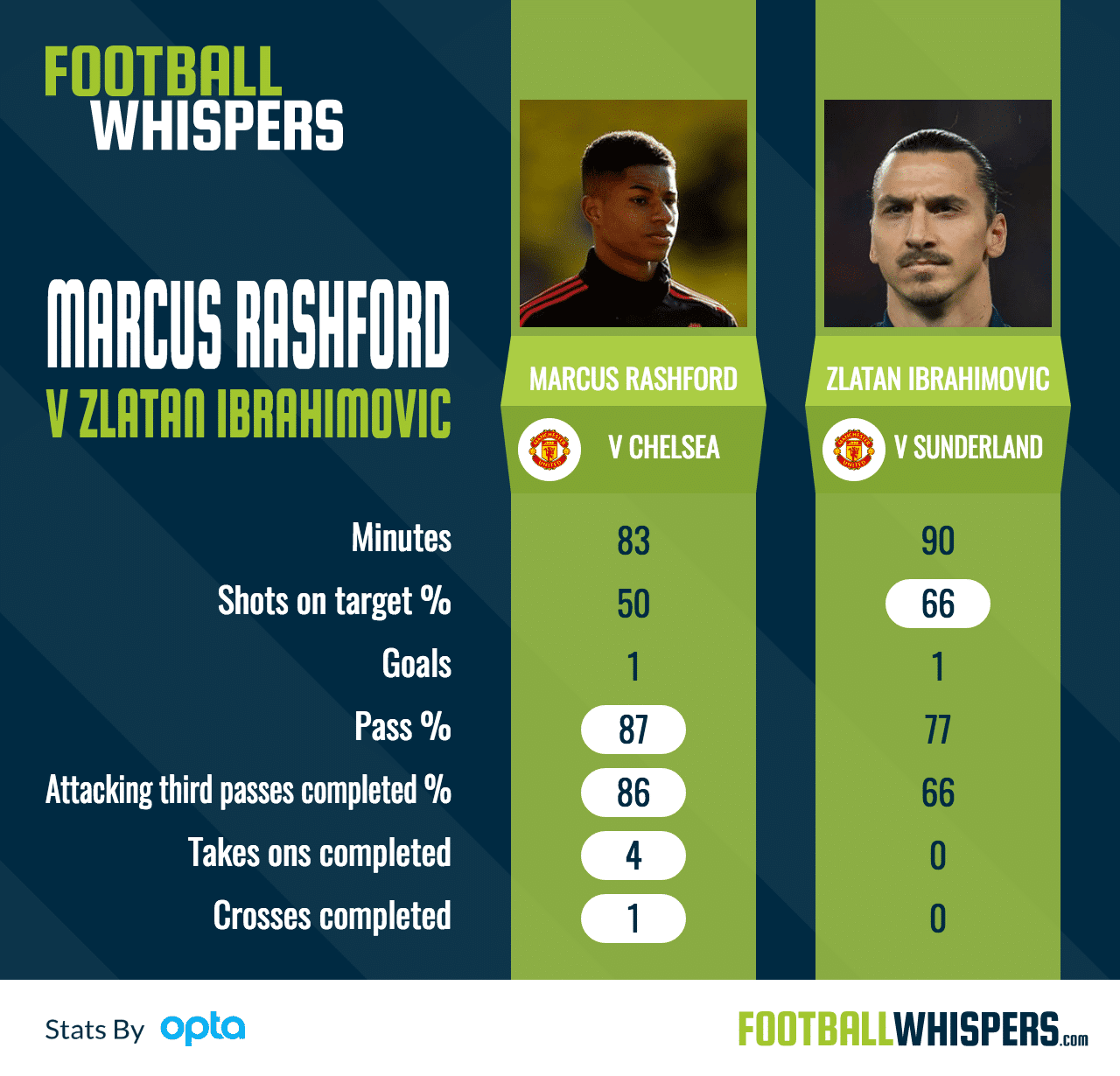 His goal was the perfect indication of what United were suddenly able to do. When Herrera won the ball in the hosts' half – albeit with an element of fortune – the Spaniard was quickly able to spring the counter and release Rashford (below). 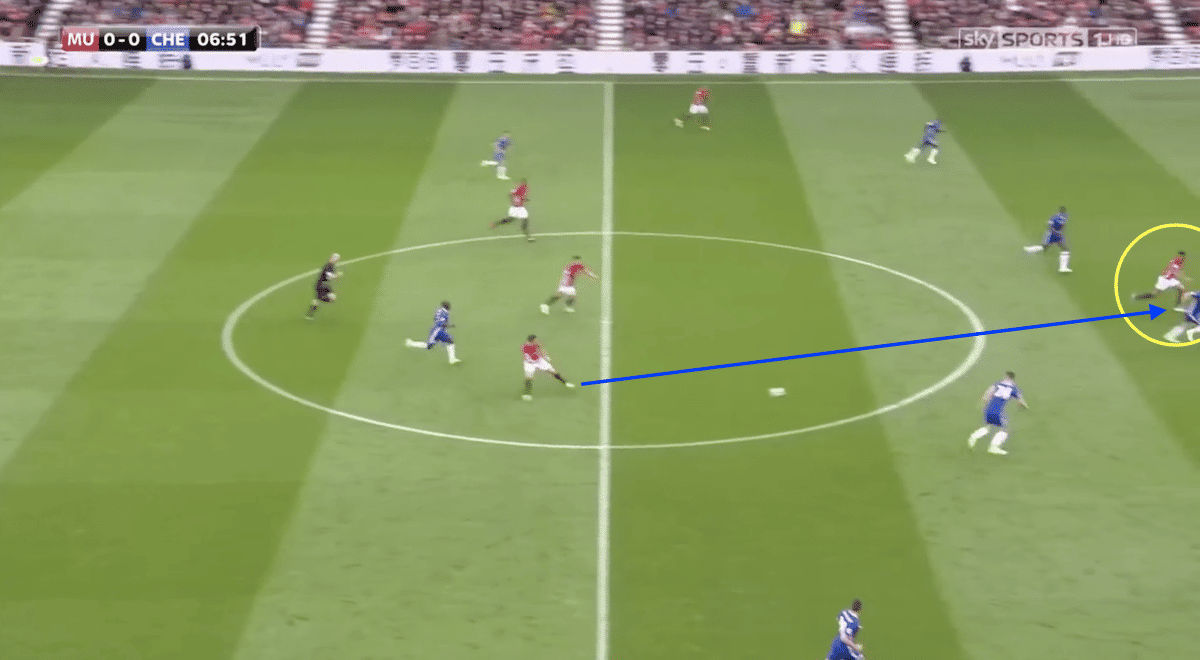 Rashford then uses his pace to out-sprint David Luiz, take Begović away from his line and slot beyond the Bosnian stopper to give Manchester United the lead – the kind of goal the Red Devils could not and would not score with Ibrahimović leading the line. 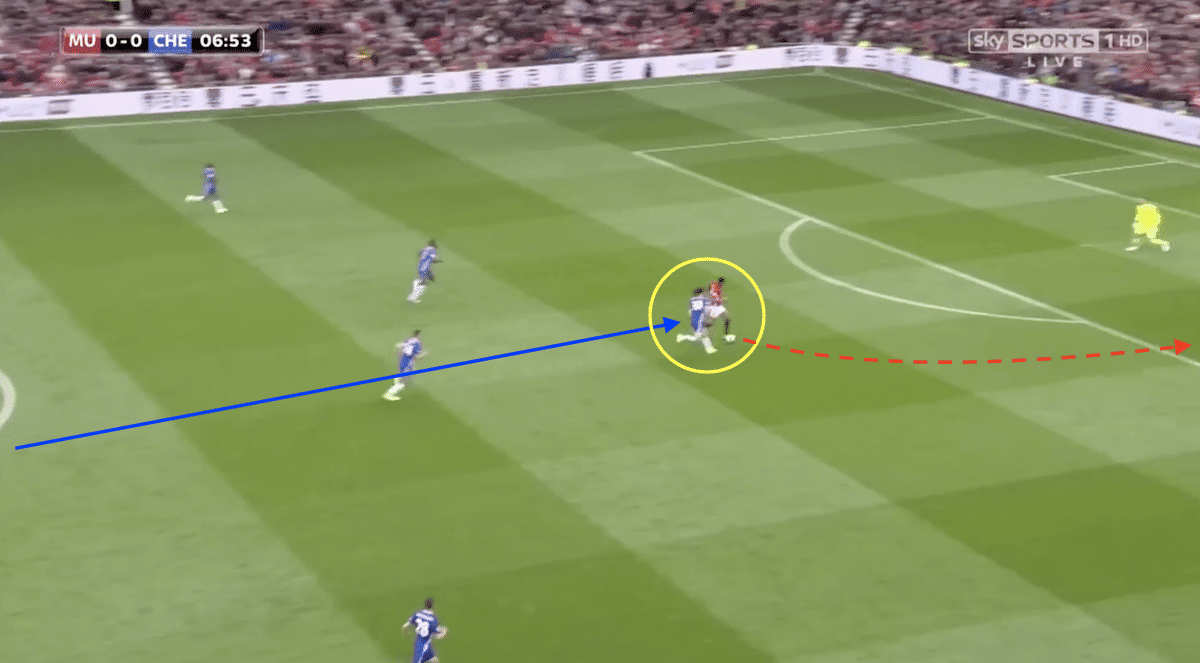 READ MORE: WHY EVERY TEAM NEEDS A JESSE LINGARD

Not long after the England international highlights his importance as more than just a focal point of the attack. Playing up front with Jesse Lingard afforded Rashford the luxury to move into the channels frequently, something Ibrahimović rarely does regardless of whether he is playing up front alone or with a partner. 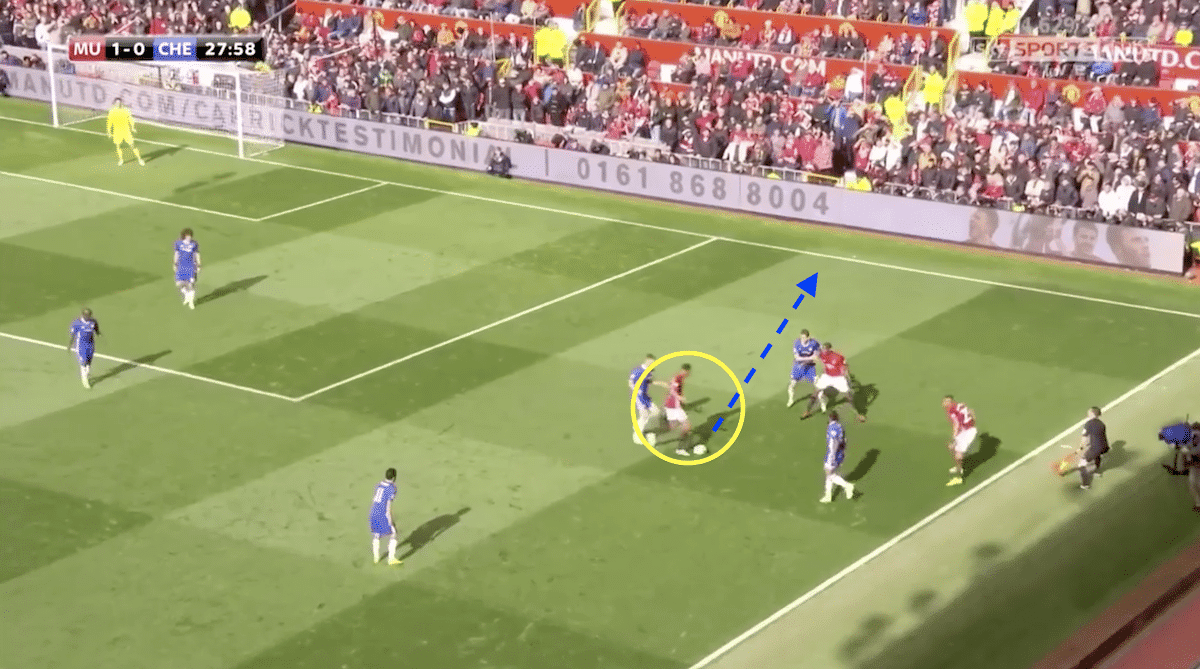 Surrounded by three Chelsea shirts Rashford drives towards the byline before rolling the ball back to Pogba. The French midfielder picks out Ashley Young on the edge of the area and, with better finishing, United could have gone 2-0 up after half an hour. 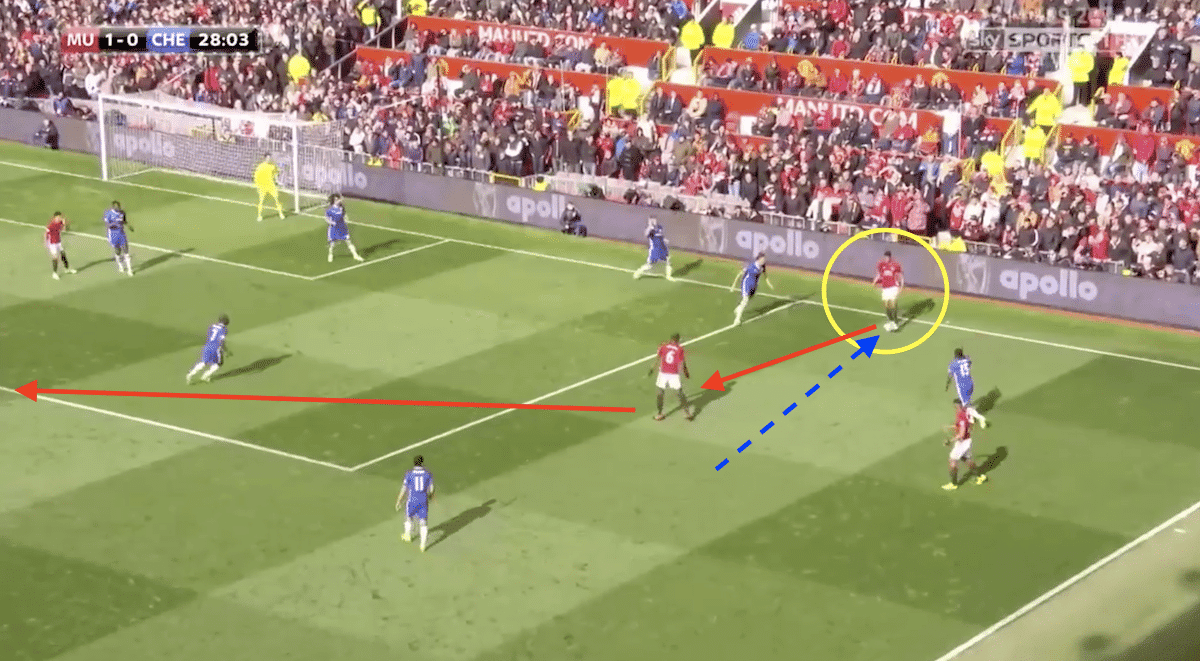 In the second half he had the opportunity to add to United's lead with a chance virtually of his own making – again on the counter-attack.

This time Fellaini is the one to launch the counter, sending Rashford scampering away down the left-hand touchline. 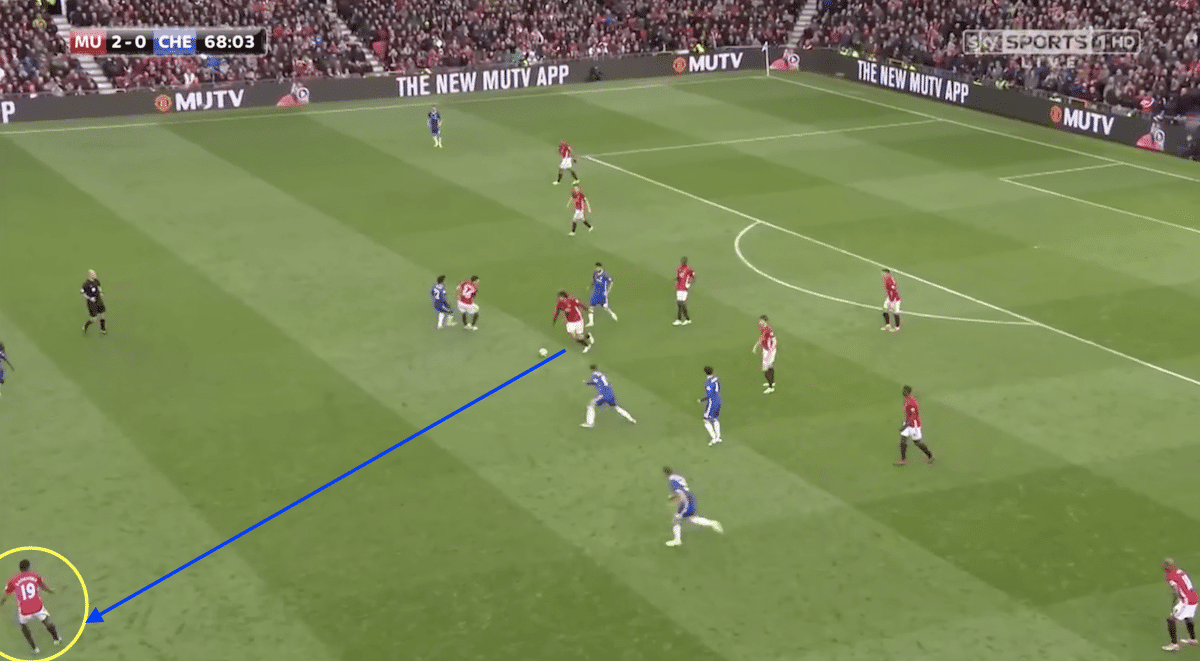 With only Young for support Rashford has to drive at David Luiz. This is where the move would slow down if Ibrahimović was Manchester United's striker as the 6ft 4ins forward would have to shield the ball and wait for the cavalry to arrive in support. 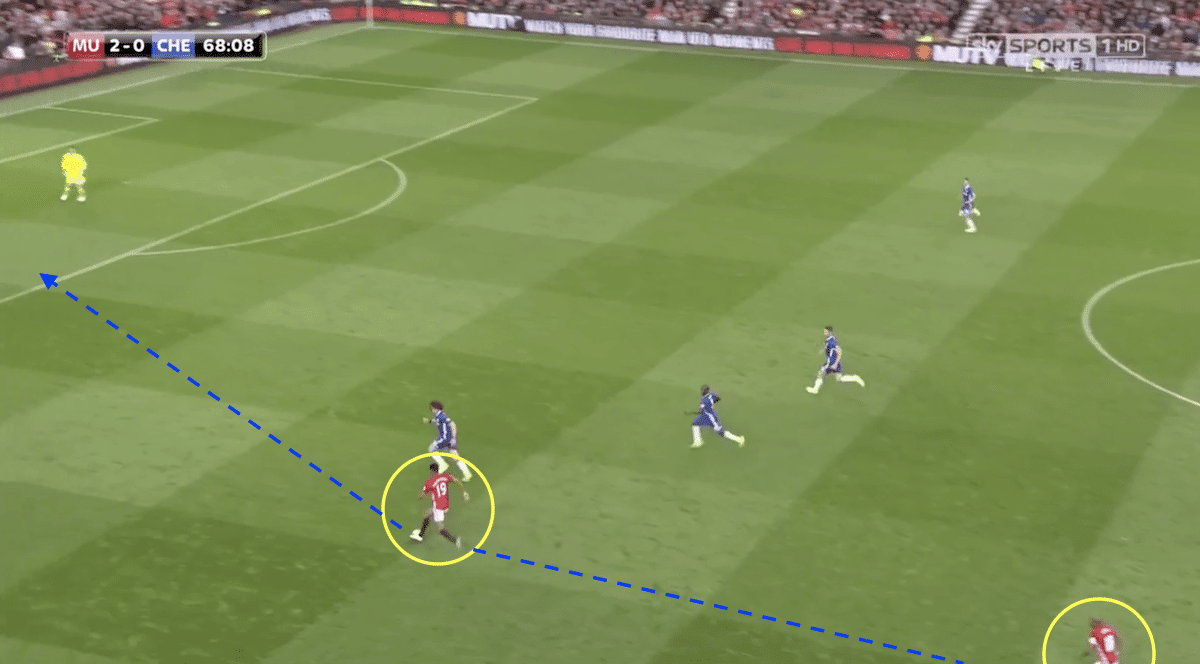 Rashford, however, proceeds into the penalty area, checks back onto his right foot and brings a smart save out of Begović at his near post. 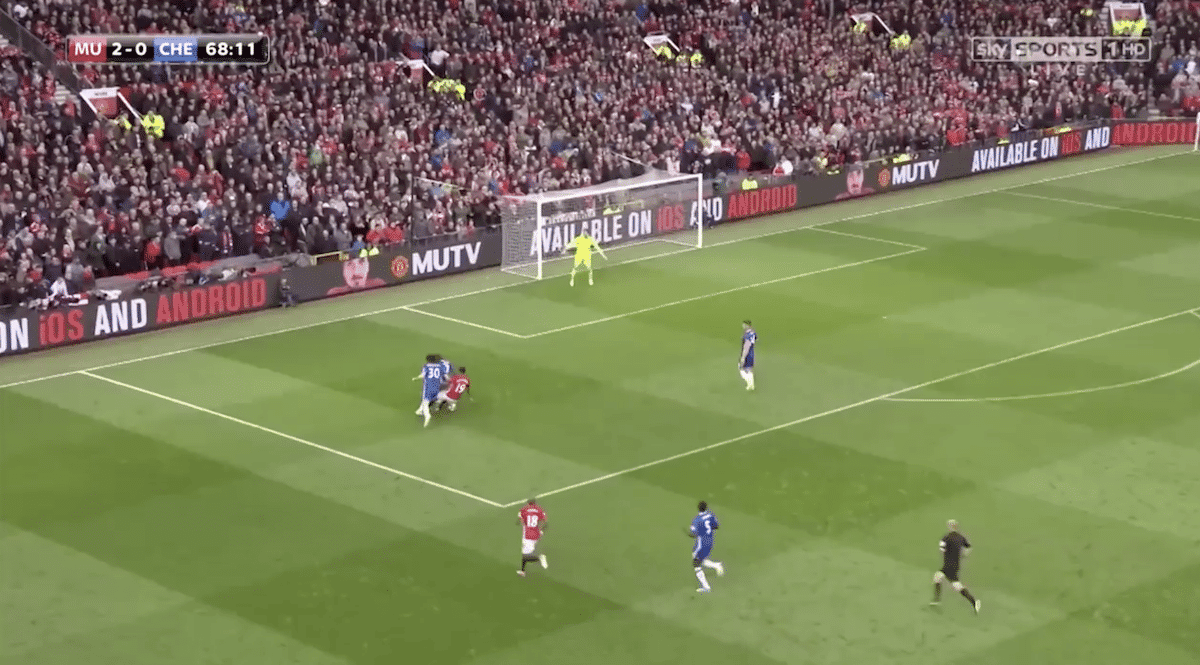 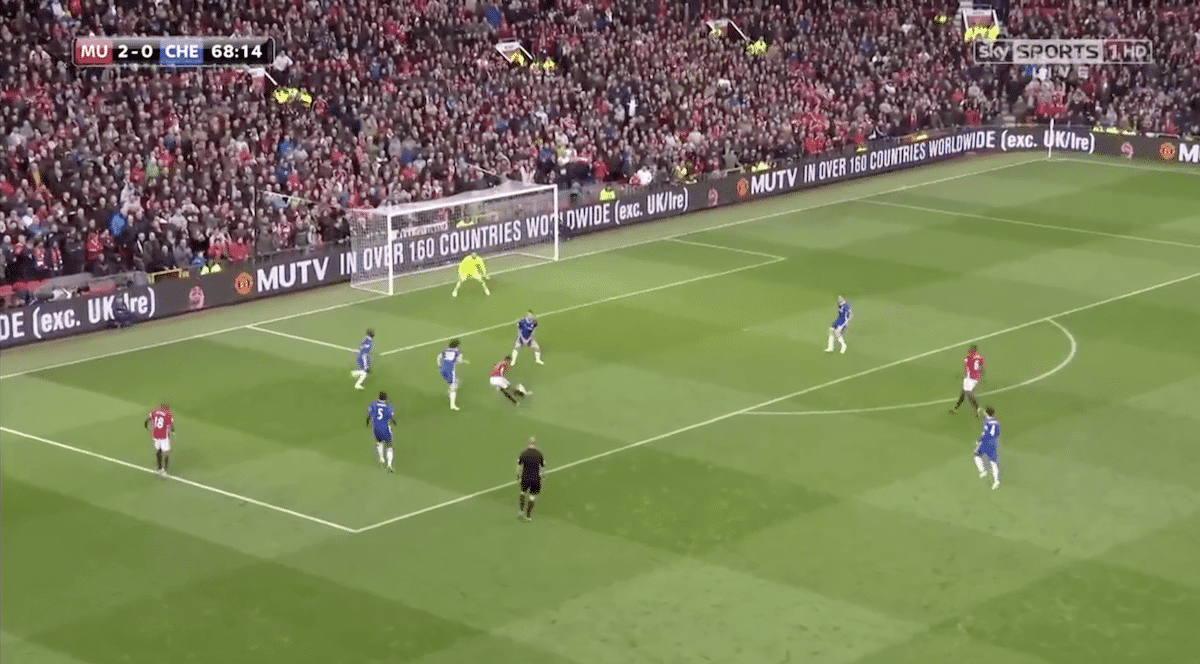 While Ibrahimović remains at Old Trafford and at the peak of his powers Rashford's chances remain limited. Mourinho worked with his number nine at Inter and the pair share a bond

In an interview with TeleFoot in 2015, Ibrahimović said: “We worked together for one year at Inter. The feeling was great between us and my only regret is that we were together for only one year.”

And Mourinho has never been slow to shower the hulking forward with praise either.

“A player who gave me as much as Ibra will always be in my heart,” Mourinho said in April 2014.” He did a lot for Inter and Inter did a lot for him. I like seeing Ibra. I greet him whenever I get the chance to and I wish him all the best – except when he plays against me.

“He is very special, he is one of the best strikers in the world.”

And that is why the enigmatic forward will remain Mourinho's preference up front for a bit longer. The Portuguese trusts him to do the job he asks of him and that is something which cannot be qualified in numbers.

Yet, now, with Zlatan injured, Mourinho has to look to someone else to be his talisman upfront. Rashford, whether he is ready or not, is going to get the chance to be that man.