While he was starring for Ligue 1 side Lille OSC, Danish centre-back Simon Kjaer was heavily linked with moves across the channel to the Premier League. Liverpool, in the pre-Jurgen Klopp days, watched the defender and links to Manchester United and others, were never far away.

Now, playing his football in Turkey, the 27-year-old is a key part of Fenerbahce’s team that pipped Jose Mourinho’s team to top spot in their UEFA Europa League group. His contribution wasn’t just in the defensive area, but his deflected shot in injury time stole a point away at Zorya. He would then pop up with an excellent header in the home victory and was named Man of the Match.

Interest from both Milan clubs has been reported recently, and Football Whispers understands that Inter definitely have an eye on the centre-back, but that the Serie A is not in the financial position to make a move any time soon, certainly not in January. That could open a window for United to rekindle their interest and pick up an experience defender who is still playing at a very high level.

United fans got a glimpse of the defender this season when they split the two group games. Kjaer was not at his best for the fixture at Old Trafford, making a huge error in the 4-1, then, although winning the second game 2-1, he would have the pleasure of Zlatan Ibrahimović’s hands being wrapped around his neck.

“I actually didn’t hear what he said but I do know that he wasn’t happy,” Kjaer told Swedish Channel 9 after the game. “But that’s the way I know him from the pitch. He is the kind of chest-puffing player, who is arrogant. That is his way of playing. My way of playing is to mark him as tightly as possible and to give him as little space as possible, because he is a good player. 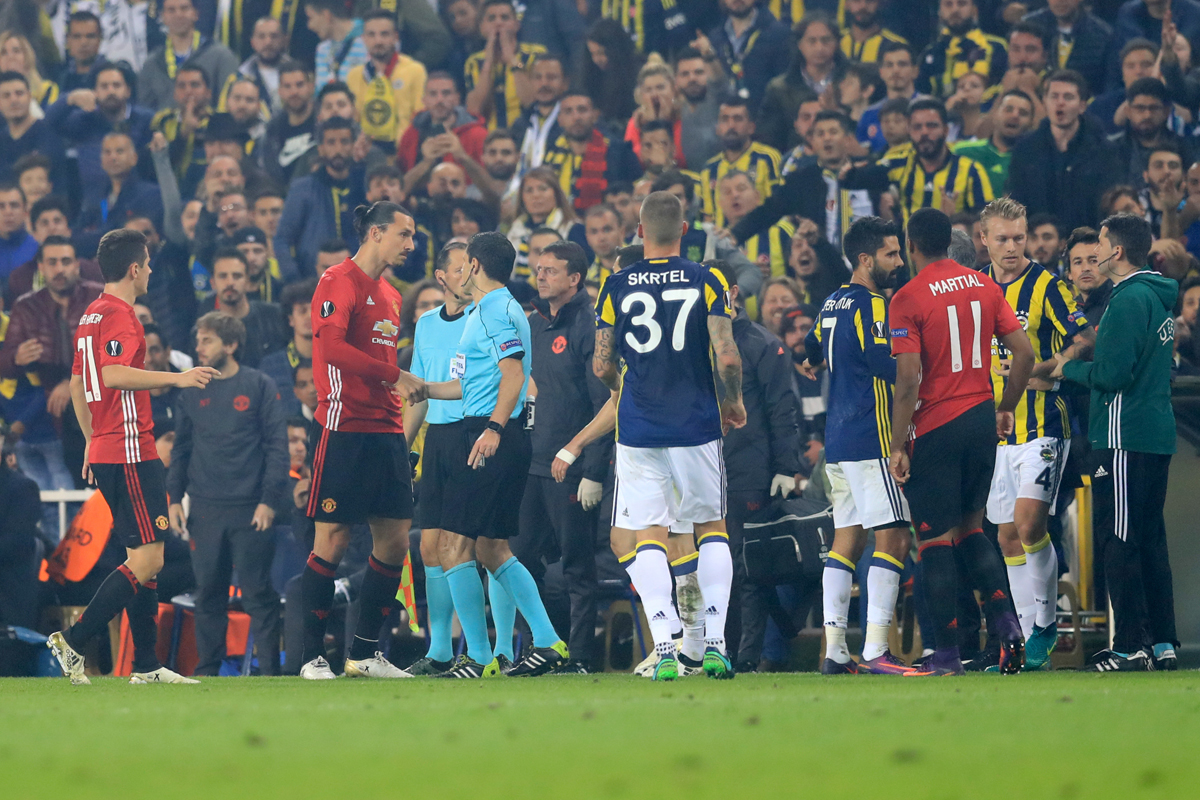 Asked about the incident, Kjaer added. “It is a part of football and I don’t take it too seriously. It is not the first time I play against him and I know how he reacts. It is not a problem. It is, like I said, a part of the game.”

Much improved in the second game, the Dane would make two tackles, two interceptions and three clearances as the Turkish side picked up a key three points. They will face Russian side FC Krasnodar in the Round of 32 in February – but it remains to be seen if he will still be at the club.

Arsenal were supposedly keen on the player in the summer, and that interest was more than just a rumour, but Arsene Wenger decided to go for Shkodran Mustafi instead of the former Palermo and Wolfsburg defender. Kjaer would have cost between €22-25 million, and although less than the German, Fenerbahce president Aziz Yildirim was quoted saying that ‘everybody was for sale, just not Simon Kjaer'.

While playing in Lille, Kjaer came back to the fore after his stunning performances helped the northern club keep one the tightest defences in Europe. Before playing against Everton in the Europa League, he was asked about a possible move to England:

“The Premier League is always an interesting place to play your football, and in the past I have considered moving there a few times,” he told FourFourTwo. “The French league seems like a good stepping stone to the Premier League with the very physical style of playing, but I need to admit that I will not be moving just for the sake of playing in the Premier League.”

His transfer to Turkey followed as the Dane gave up the quiet life in Lille, for the hustle and bustle of Istanbul and a chance to play in the UEFA Champions League. His numbers remained impressive though, in Ligue 1 he was averaging 7.6 clearances a game in his last season at the Stade Pierre Mauroy, that has gone down to 4.1 last term and 2.4 this season as Fenerbahce sit fourth in the table.

In terms of interceptions and tackles made, he is averaging 1.5 and 1.6 this campaign in his 12 league appearances. As one of the more dominant teams in the league, the amount of defending Kjaer has to do on a game-by-game basis has certainly dropped since his time at Lille, but that doesn’t mean he wouldn’t be an ideal addition to Mourinho’s back-line.

Due to his age, the Dane could be exactly what United need at this stage of the season. He gained a reputation as a fan-favourite at Lille due to his warrior spirit, a no-nonsense style of defending and a wonderful attitude on and off the pitch.

#Kjaer an outstanding performing with #LOSC. Has been linked in the past to Tottenham, Arsenal, Man United & City. #THFC #AFC #MUFC #MCFC

Playing beside the likes of Eric Bailly, Phil Jones and even Marcos Rojo, Kjaer has more experience than that trio and he would be another elder statesman alongside Chris Smalling.

The 22-year-old Ivorian is full of raw power, energy and pace. He’s keen to jump in, making 2.1 tackles per game and 3 interceptions this season. Great in the air and smart in making covering tackles along the ground, Kjaer plays with intelligence, he’s not extremely quick, but reads the game well and rarely gets caught in behind. Playing beside former Liverpool defender Martin Skrtel, Fenerbahce have the fourth best defensive record in the league, but the Dane only makes 0.8 fouls per games compared to the Slovakian’s 1.5.

Rojo and Bailly make 1.3 and 1.2 per game respectively and if Mourinho is keen to add more stable centre-backs to his team in January, Kjaer could be someone that would interest the Portuguese manager.

In terms of lifestyle, the centre-back, enjoyed his time in Italy and it's something he would apparently like to revist. However, it’s understood that a move to a club like Arsenal, Liverpool or Manchester United would be enough to turn his head back towards the Premier League.