Manchester City have caused eyes to widen with alarm through their transfer activity thus far this summer. And never were eyes wider than when – after the signatures of Bernardo Silva from Monaco and Ederson from Benfica for substantial fees – the £45million capture of Tottenham Hotspur right-back Kyle Walker was confirmed.

An England international, a key member of a title rival, and one of the Premier League’s best in the position Walker may well be, but nonetheless few saw such a hefty price tag being attached to the player.

Despite the lavish amounts spent and the quality brought in, however, City still haven’t added a new central defender to their ranks. This fact, along with recent reports suggesting Nicolás Otamendi could be on his way to Real Madrid, have led some to question the club’s defensive plans.

Why Is Pep Furious? | Manchester City | FWTV by FootballWhispers

A few words will never be associated with the Argentine, those words including: cultured; technically refined; controlled. However, with 30 Premier League appearances to his name last season he was the team’s most consistent defensive starter and an integral component within an ever-changing and not-always-reliable back line.

Pep Guardiola’s revolution is headed into its second season, but Otamendi may not play a part in it if recent rumours are to be believed. Here, Football Whispers argues that this could in fact turn out to be a positive development in City’s progress as a club.

Real Madrid have been strangely quaint in their transfer dealings since Zinédine Zidane was appointed manager. The new off-pitch strategy fits the French boss’ on-pitch philosophy, which is based on maximising resources, increased defensive focus, as well as a more compact shape in and out of possession.

This approach led the club to a La Liga title and a Champions League win last term, so it’s working. And it looks set to continue, with the only noteworthy signings this summer thus far being those of two talented young prospects in Theo Hernández and Dani Ceballos.

Otamendi doesn’t fit the mould in terms of age and potential, but he does in other ways. Earlier this month, Real Madrid said goodbye to Pepe, a central defensive veteran whose combative edge was critical to their successes in recent years. Should they attempt to replace him, the City man would be a sound choice.

Not only does the Argentine have La Liga experience – he spent the 2014/15 season with Valencia – but he brings the aggression, power and grit needed to fill the Pepe-sized hole in Zidane’s squad. Granted, he may not be as overtly tall and physical, but he is aerially strong – last season he won just under 63 per cent of his aerial duels.

Real Madrid’s need for this type of centre-back may only be further highlighted by the ageing of Sergio Ramos. Now 31, the Spaniard is reaching the latter stages of a long career and could do with an alternate.

WHY MANCHESTER CITY SHOULD SELL

It may sound strange to hear that a player could simultaneously be wrong for City and right for Real Madrid, but this may well be the case with Otamendi. For, while his aggressive spirit could be just what the latter need right now, his lack of technique does not suit the former.

Guardiola has always made good use of direct centre-backs, but he also demands a level of composure, intelligence and efficacy on and off the ball that the 29-year-old has yet to demonstrate on a consistent basis. 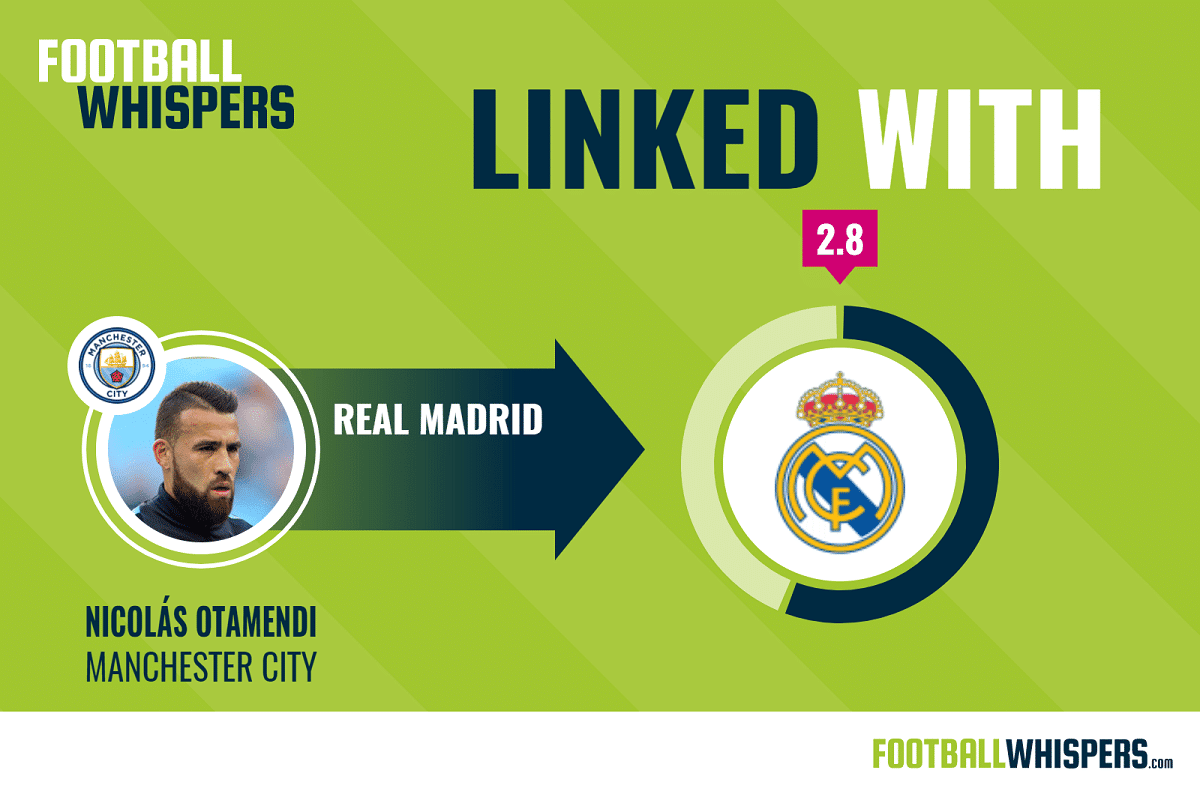 Otamendi’s aggression can easily become recklessness, as was evidenced several times last season. Indeed, after the Champions League clash with Steaua Bucharest, the City manager had this to say about one of his charge’s tackles:

“I don’t like it when central defenders go down on the pitch. I don’t know about last season because I wasn’t here, but we are here to get him better. After the two penalties for us, a little situation is going to give away a penalty against us and we have to avoid that.”

In truth, Otamendi’s combination of experience, physicality and fitness kept him in a defensive line that was constantly tweaked. John Stones represents the future with his purposeful passing and occasional forward forays, while Vincent Kompany showed towards the end of the campaign that – when fit – he remains his team’s most efficient central defensive leader.

All of this leaves the Argentine in a somewhat difficult position, somewhere between the past and the future, and with his individual style just dissonant enough to consider a serious bid for him should Real Madrid make a move.

Sportskeeda reported that Manchester City are open to selling Otamendi and that, if their valuation of £20million is met, he could be on his way. While temporarily this would leave them in desperate need of another centre-back, it could pave the way for a more suitable replacement being brought in.

WHO COULD SUCCEED OTAMENDI?

When it comes to the transfer market, timing is everything. And, unfortunately, City may have missed out on the deal of this summer’s window, with Leonardo Bonucci having left Juventus for Italian rivals AC Milan in a €42million deal.

Few saw the move coming, but now it has been completed the rest of Europe’s elite must accept that the Italian – arguably the best, most complete centre-back in the world today – is no longer available. City, as well as Chelsea, were purported to have their eyes on the 30-year-old, though they must now look elsewhere.

There is plenty of room to play with between Otamendi and Bonucci, however. Southampton’s Virgil van Dijk would not be quite so seismic a step up in class, but he would be a step up nonetheless. Another perhaps more viable option is Real Sociedad’s Iñigo Martínez, who has been linked with a move to the Etihad recently and has a release clause of just £27million.

If Guardiola’s City project is to live up to its immense early billing, central defensive reinforcements are necessary regardless of whether Otamendi stays or goes. But should the latter scenario materialise, there are affordable, quality successors out there that would improve the team’s defence while also better fitting the team’s style.