Phase two of Pep Guardiola’s revolution at Manchester City is well under way and it appears Borussia Dortmund midfielder Julian Weigl is the poster boy for it. Spanish media outlet MARCA claim City are to go head-to-head in a tug-of-war with Guardiola’s former club Barcelona in the summer for the services of the German midfielder. 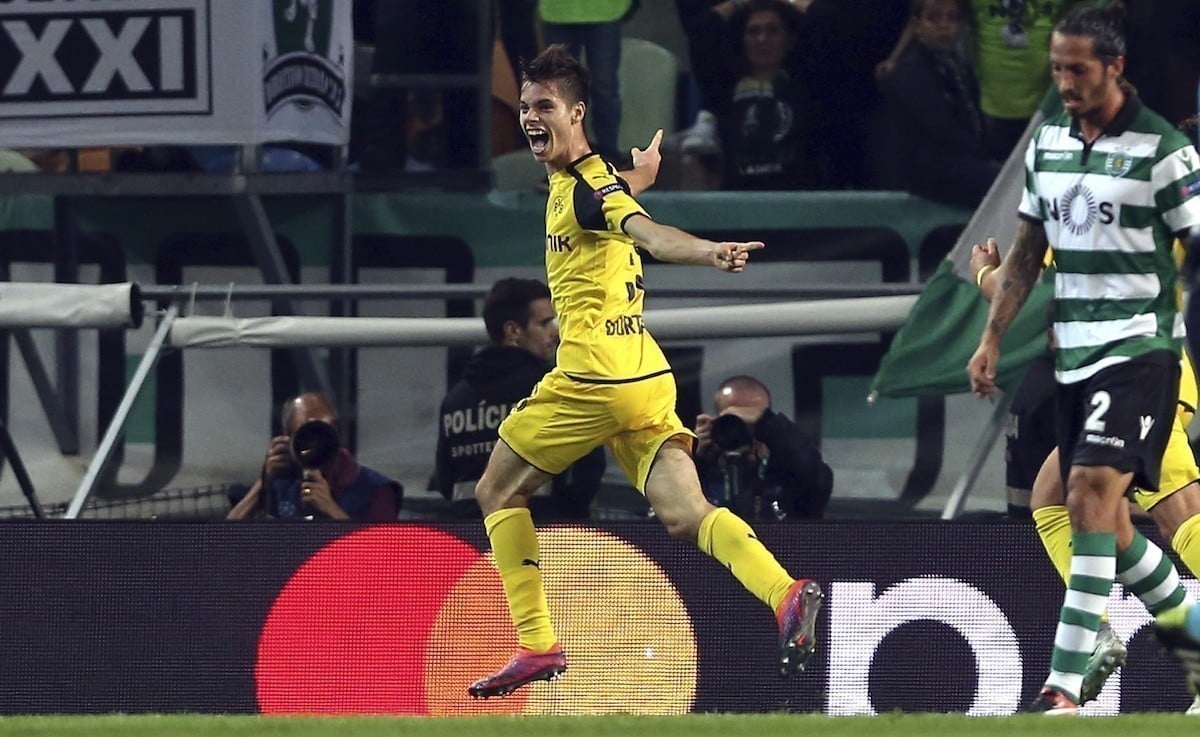 The La Liga giants see 21-year-old Weigl as the long-term successor to 28-year-old Sergio Busquets as the metronome at the heart of their midfield. The Catalan club are in the midst of a bit of a youth drive having signedLucas Digne, Samuel Umtiti, Andre Gomes and Paco Alcacer as they plan for life after ageing stars Andres Iniesta, Gerard Pique and Lionel Messi. Replacing Busquets is no easy feat but pass-master Weigl has every chance of doing just that.

However, Guardiola is not showing any respect to his former employers and, according to reports, has ordered City director of football, Txiki Begiristain, to push through a deal, no matter what the cost.

The Catalan native is a long-term admirer of the Dortmund conductor and is said to be “in love” with him, but any chance of a deal, in the near future at least, seemed to end when he signed a new deal at the club tripling his salary and extending his deal until 2021. Dortmund’s sporting director, Michael Zorc, has this to say when the extension was announced “We are very happy that he has decided to stay with us for the long term”.

But Guardiola is yet to be dissuaded and City can easily double his newly tripled wages, reported to be around £50,000-per-week. But prying him away from Dortmund, whilst simultaneously fending off interest from Barcelona will be no easy feat.

The project at the Etihad is one of the most exciting in the world. The chance to earn a substantial salary while playing under Guardiola is enough to woo most players, but they run into trouble, like every other club does, whenever Barcelona or Real Madrid enter the fray. So why is Guardiola so adamant to collaborate with Weigl?

What Does Weigl Offer Manchester City? 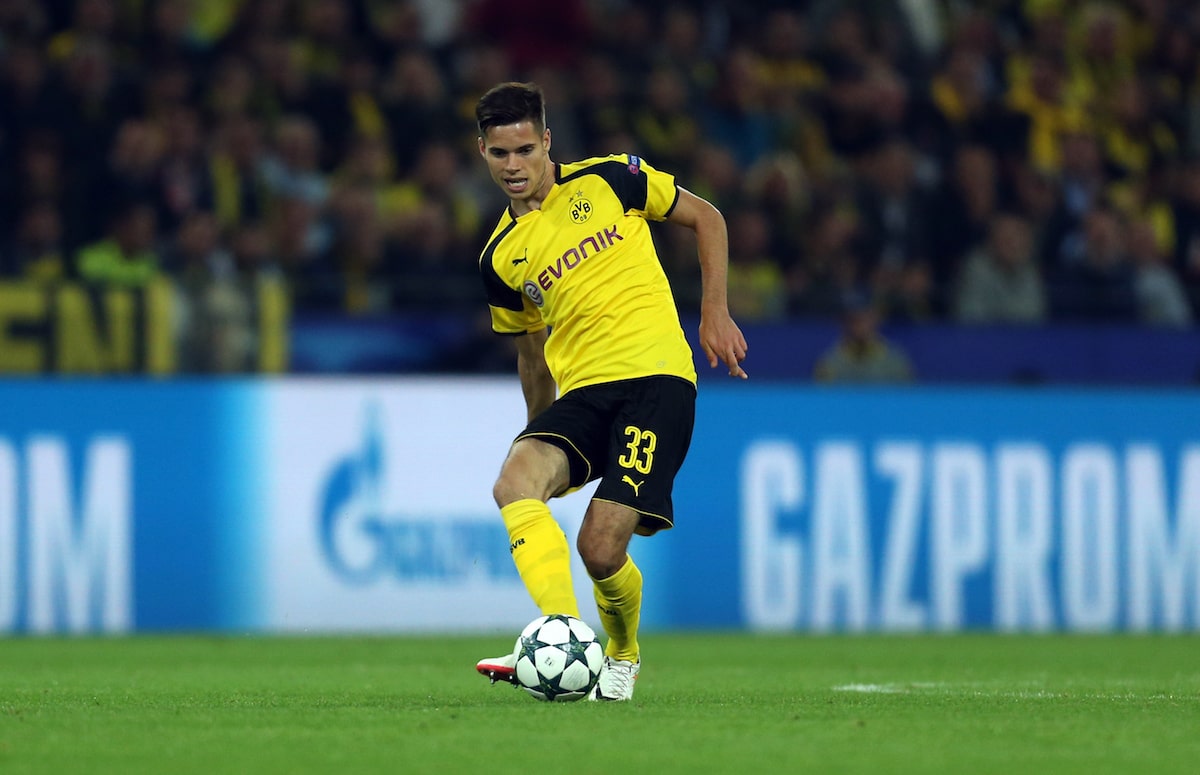 Pep’s tried the likes of David Silva and Kevin De Bruyne in midfield and Fernandinho has been somewhat of a balancing counter weight to the creative, attacking duo alongside him. When the rest of the team attacked he’s usually holding his position and filling in as and when. So far this season the Brazilian has averaged 2.2 tackles and 1.8 interceptions per game, and has been dribbled past 1.6 times per 90 minutes. He attempts 69 passes and completes 86% of them.

No Manchester City player attempts, on average, more passes than Fernandinho, but the 31-year-old only has eighteen months remaining on his deal and he’s not a long-term solution there. This is where Julian Weigl comes in.

Initially, the young German stepped in to fill in for the injured Ilkay Gundogan but then kept him on the bench when he returned, with Tuchel planning for the long-term after Gundogan announced he would be leaving. Weigl keeps things ticking over for BVB and it’s why it will take a reported £40 million to convince Dortmund to part ways with him. In the Bundesliga so far this season he has averaged 2 tackles and 2.2 interceptions per game, and is dribbled past 1.1 times per 90. He attempts 76.8 passes and has a 91.8% pass success rate. 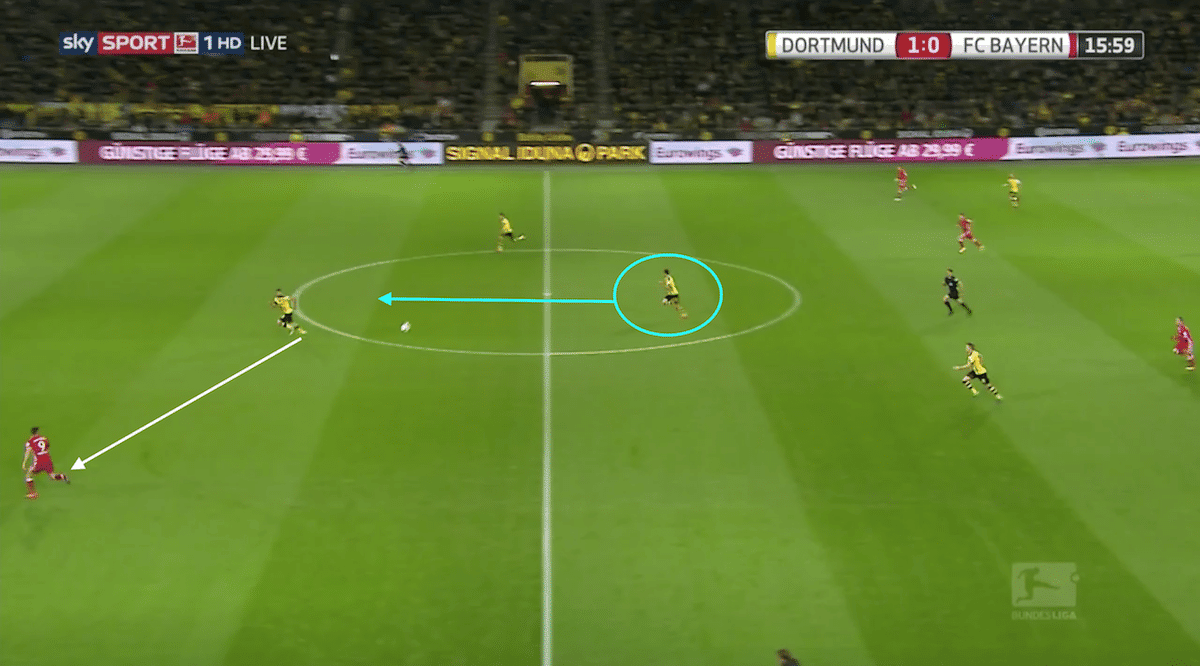 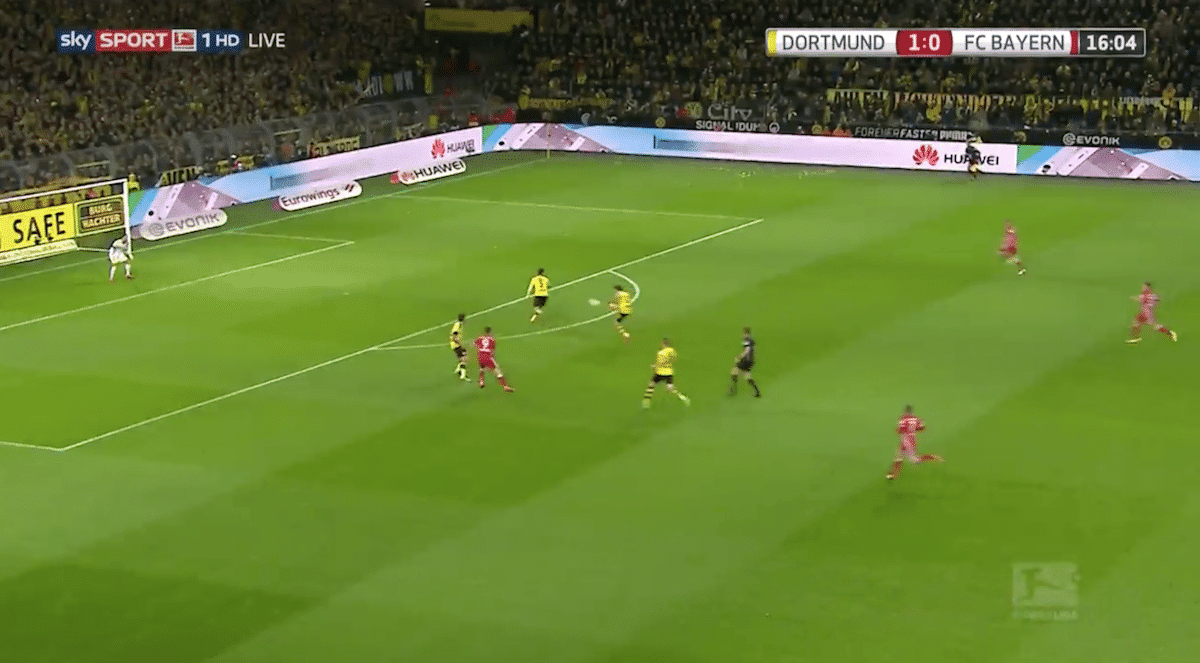 In the two pictures above, taken during Dortmund’s 1-0 win over Bayern Munich, Weigl showcases his positional sense and his covering ability. In the first picture Bayern have played a ball over the top and look to hit the home side on the counter attack. Robert Lewandowski has peeled wise and the Dortmund right centre-back has to scurry over. Weigl, makes up the ground and, as you can see in the second picture, is in a position to cut out the attempted cross field pass by the Polish forward which puts an end to that attack just as the Bayern cavalry are arriving. 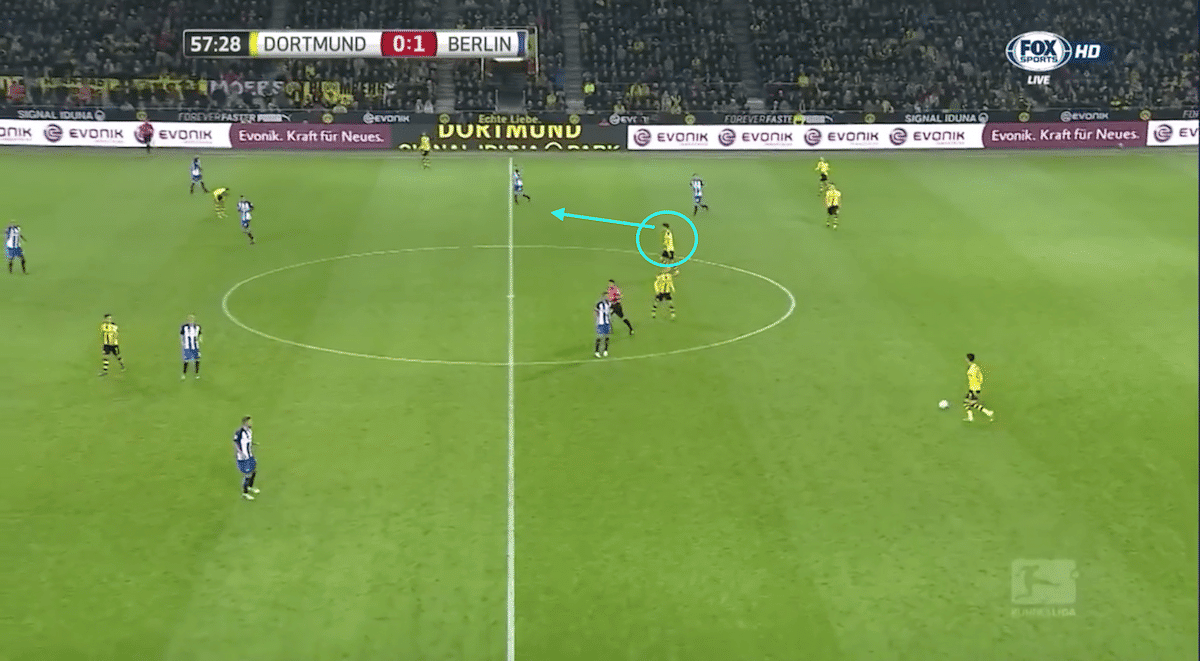 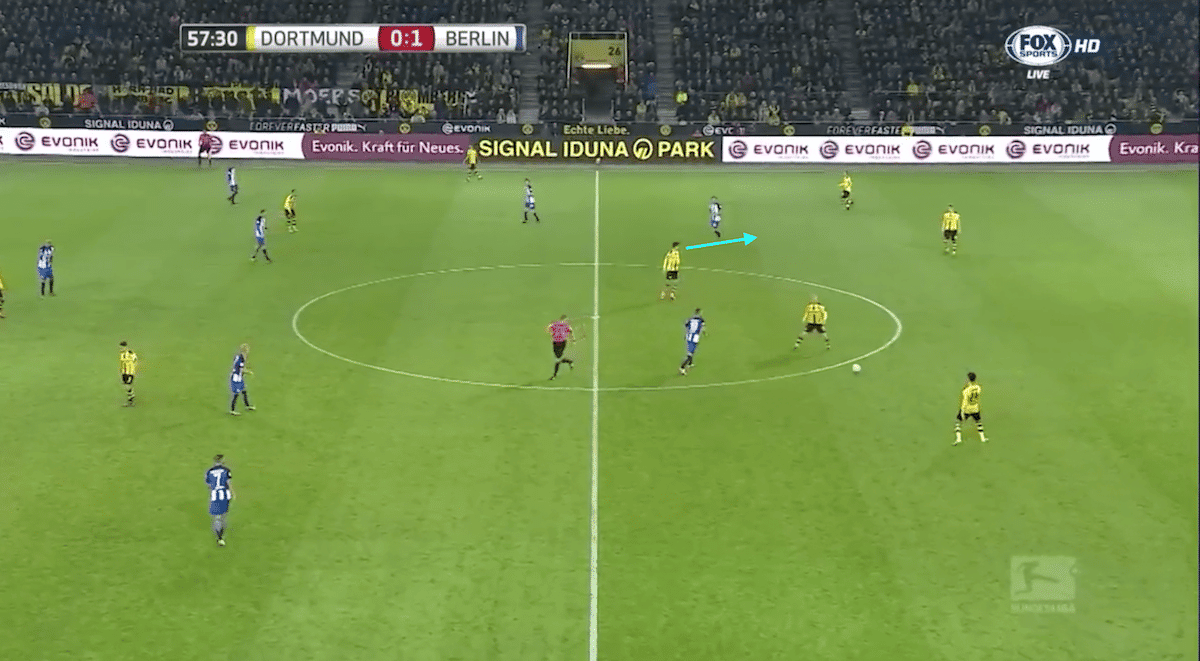 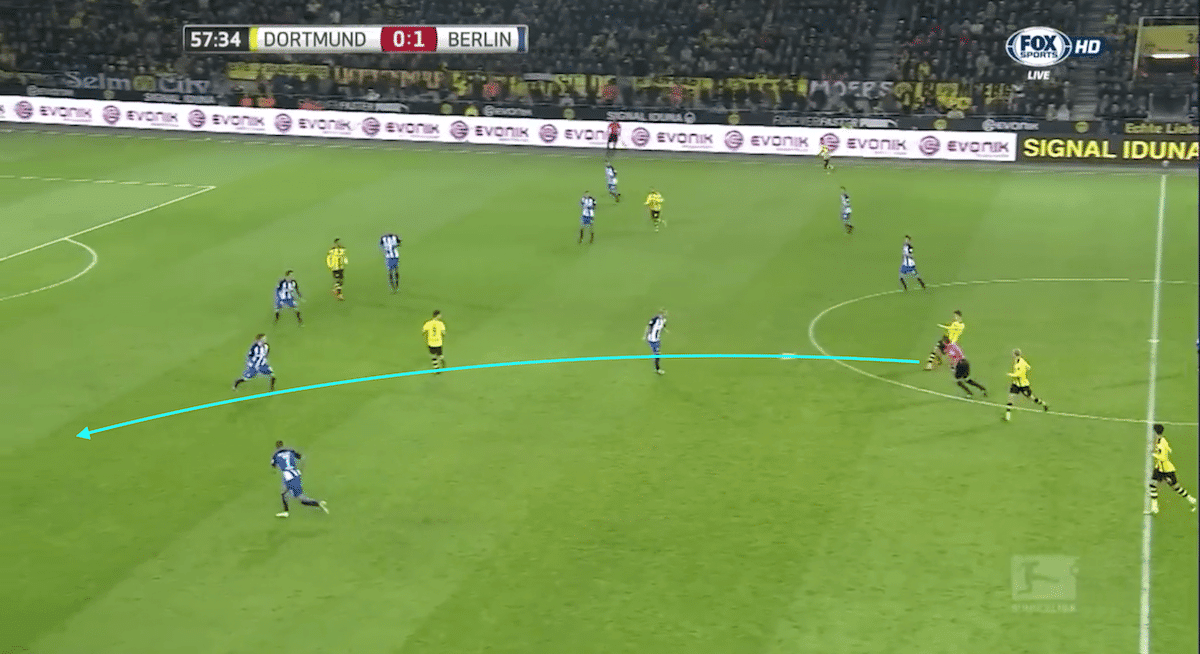 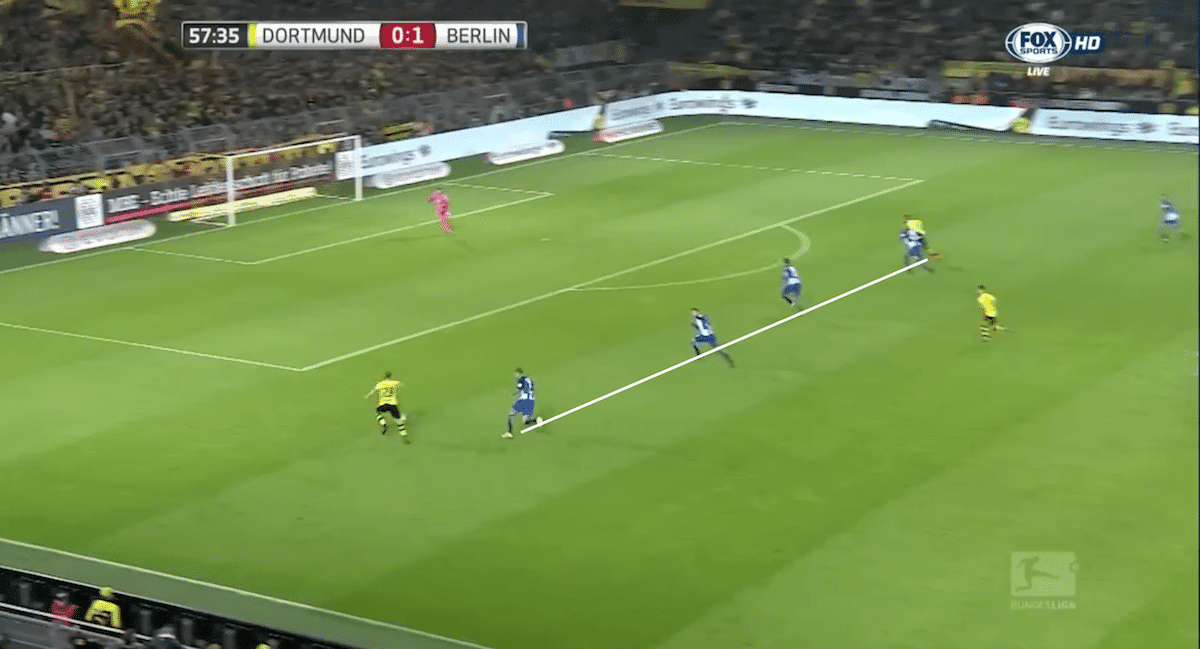 In the series of pictures above you get to see Weigl’s intelligence. In the first two pictures he is clearly looking around ensuring he knows what’s around him before receiving the ball. They’re just quick glances but it helps him build the picture of what’s around him which then dictates his next move. He drives forward into space knowing Dortmund have men covering behind before executing an incisive pass which stretches the Hertha Berlin backline and has them chasing back facing their own goal. The away side went from having nine men behind the ball to have nobody behind the ball as Marcel Schmelzer drives into the space. 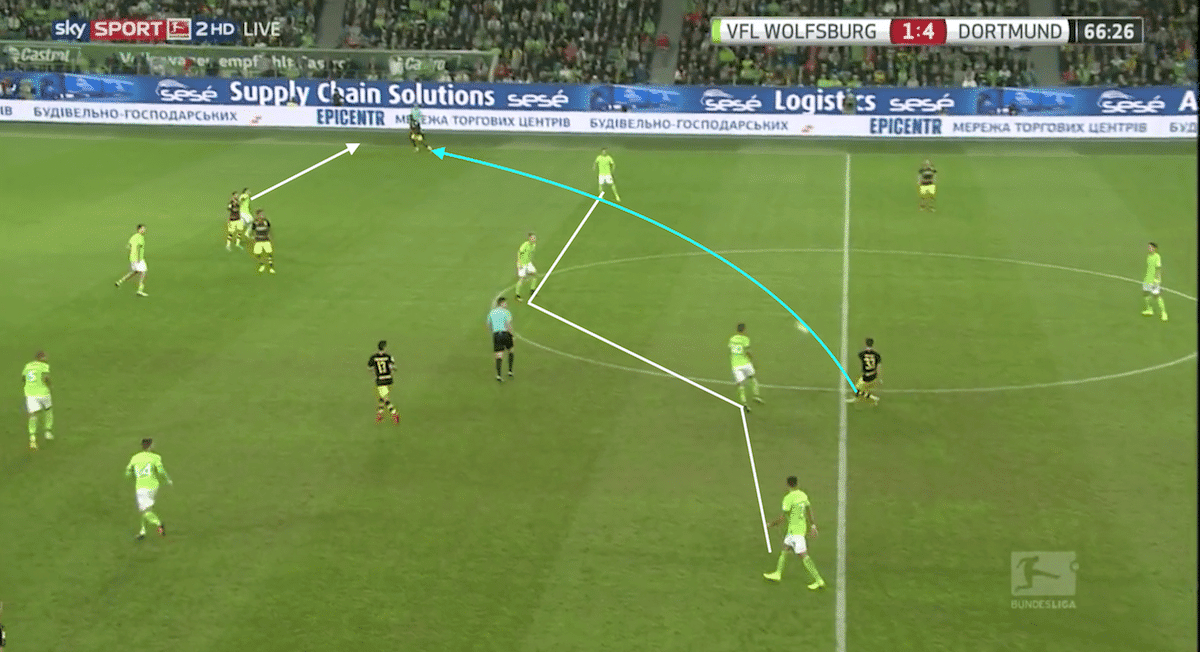 When teams are dominant in possession the opposition often look to clog the game up centrally. In the picture above you can see a narrow Wolfsburg defence with Ousmane Dembele free on the Dortmund right. He’s afforded such space because Wolfsburg are banking on the away side looking to build up slowly and work the ball over to the wings in stages. They’re able to move over as a team. However, these narrow sides have problems when the play is switched quicker than anticipated. Weigl playing this pass so early in the build up takes the midfield out of the game and means the left-back, Rodriguez, has to push out quickly to engage with Dembele which stretches the defence.

Manchester City need midfield reinforcements with Yaya Toure looking likely to leave at the end of the season. Fernando attracting interest from abroad and Fernandinho coming to the end of his career. Money is no object for the club so they should be signing the best of the best. Weigl is just that. £40 million for a player who, if he stays injury free, could be controlling your midfield for the next decade seems like a bargain.