The Spaniards game plan was dealt a blow when Gabriel Jesus picked up a foot knock and the Argentine striker was called off the bench after just 14 minutes.

Bringing on a forward that has scored 11 goals in 14 starts this season should never be a bad thing, but against AFC Bournemouth’s well-organised, hard-working defence, you could see throughout the game, the limitations that Agüero has in Guardiola’s system.

The Arrival of Gabriel Jesus

Every time that Pep doesn’t name him in the starting line-up, it’s seen as huge news and the biggest story of the day, but since the arrival of Gabriel Jesus, dropping Agüero makes more sense than anyone would ever have thought.

Against West Ham United and Swansea City, Jesus offered City movement, intelligence, a willingness to find his team-mates and the inter-play between him, Leroy Sane, Kevin De Bruyne and Raheem Sterling had been breathtaking.

The young Brazilian, in just 203 minutes, has picked up three goals and an assist. It’s not just with the end product that he has impressed, but the way he has settled in and brought a new dimension to the City attack.

As soon as Agüero came on during Monday’s match, the direction and threat from the away side completely changed.

City’s players would have enjoyed some down time during the weekend and perhaps the Argentine forward should have gone to see the new LEGO Batman Movie – where the central theme of the film is that everything is better when you work together. 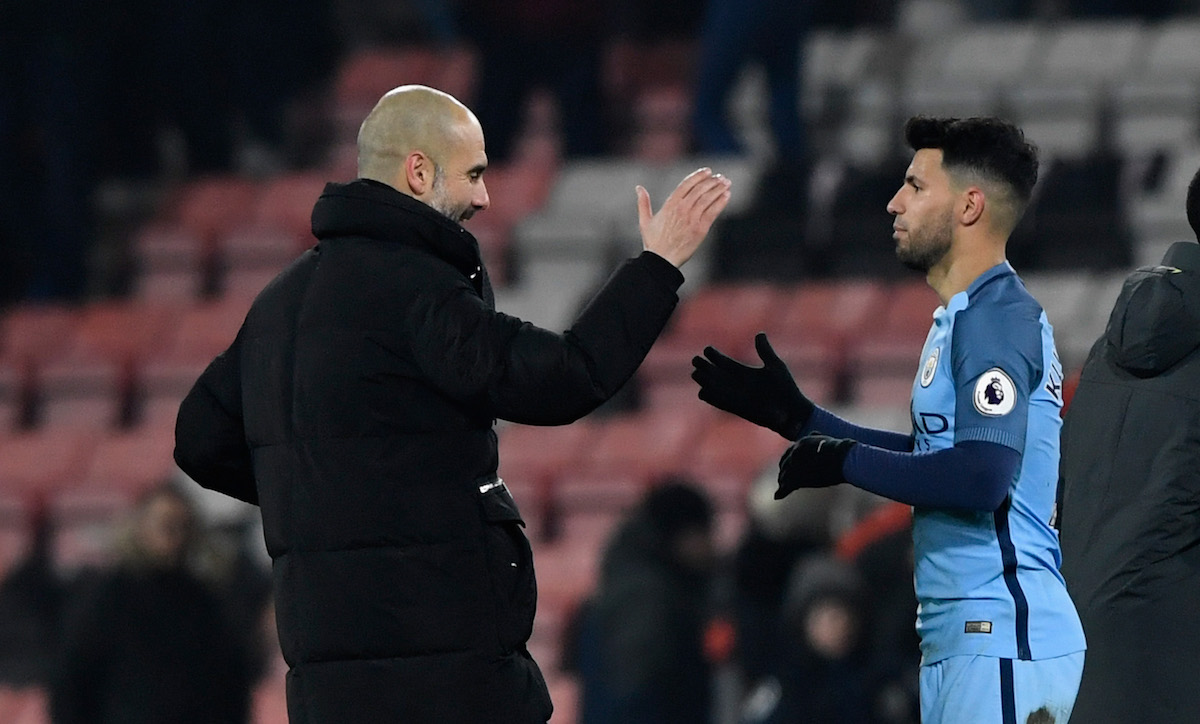 The 28-year-old, whenever City are on attack, has only one person in his head. Sergio Agüero.

Any build up play including the former Atletico Madrid forward is reduced to token touches around the half-way line, or looking to get on the end of crosses in the box. 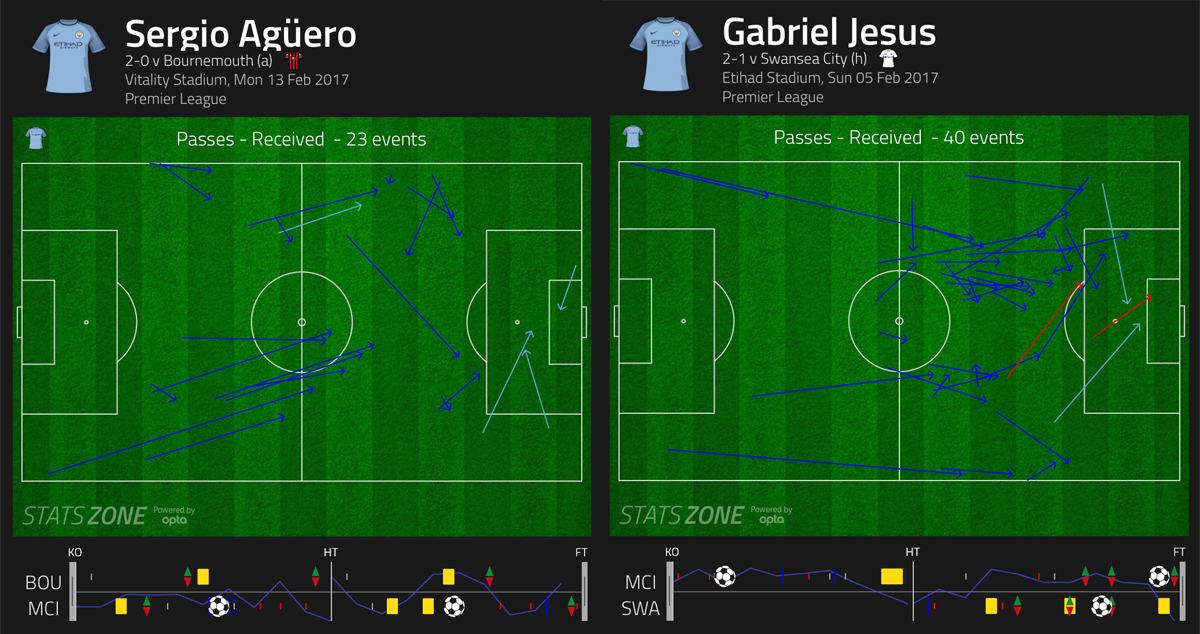 What Jesus had added was he ability to create little triangles around the box, runs down the channel that would drag the defence out of position, while also making well-timed runs in behind the defence.

The graphic below shows Agüero’s position when De Bruyne gets the ball wide. Against West Ham or Swansea, Jesus would have made the run shown by the white arrow, giving the Belgian a different angle, bringing Sterling into play too. 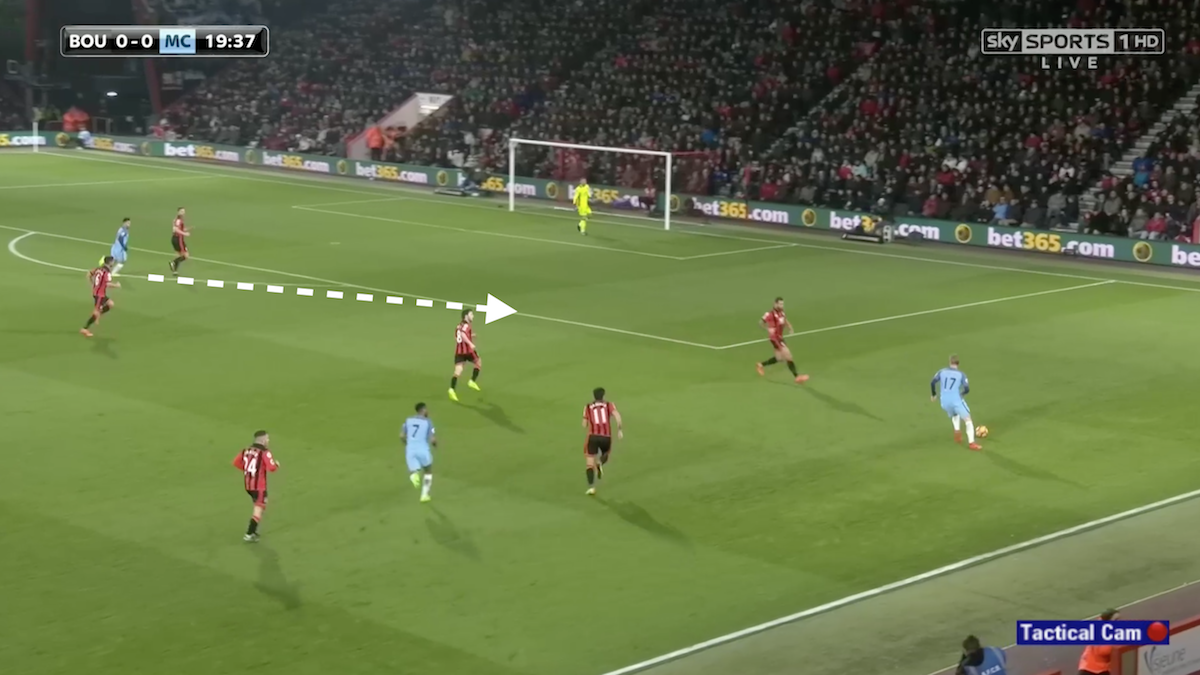 De Bruyne is left with just one option, the ball is played in and the Cherries deal with it well.

When the Argentine does receive the ball with his back to goal on the edge of the box, rather than get his head up, look to play a pass, he has his head down, turning into traffic and firing off a forced shot on goal. 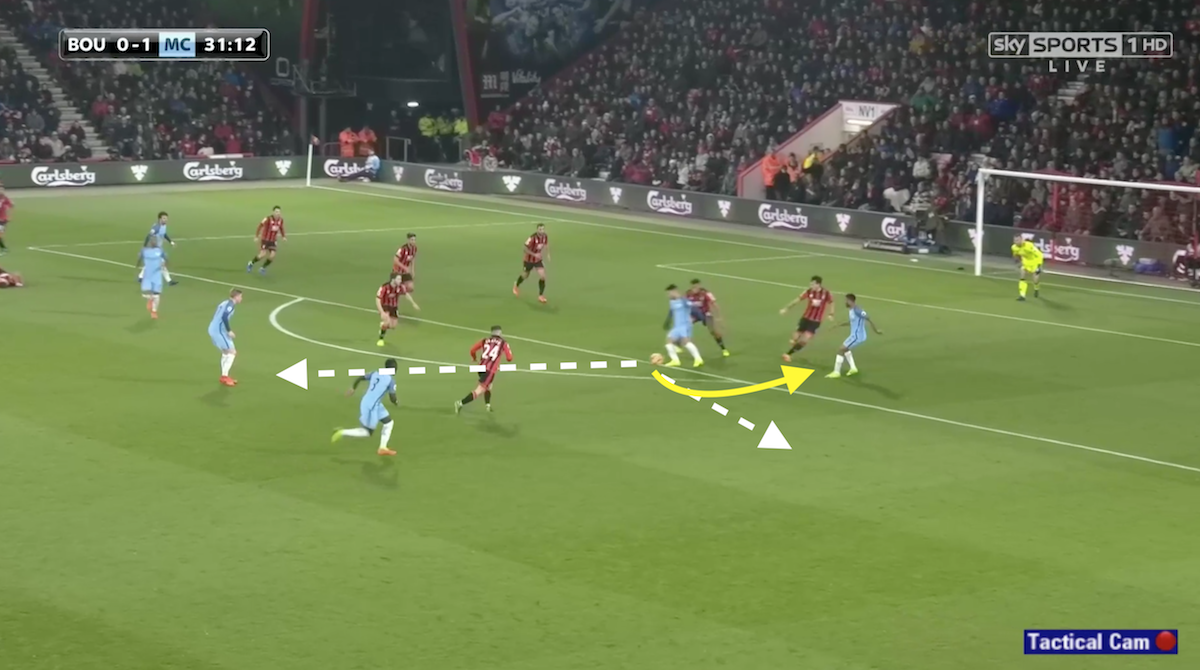 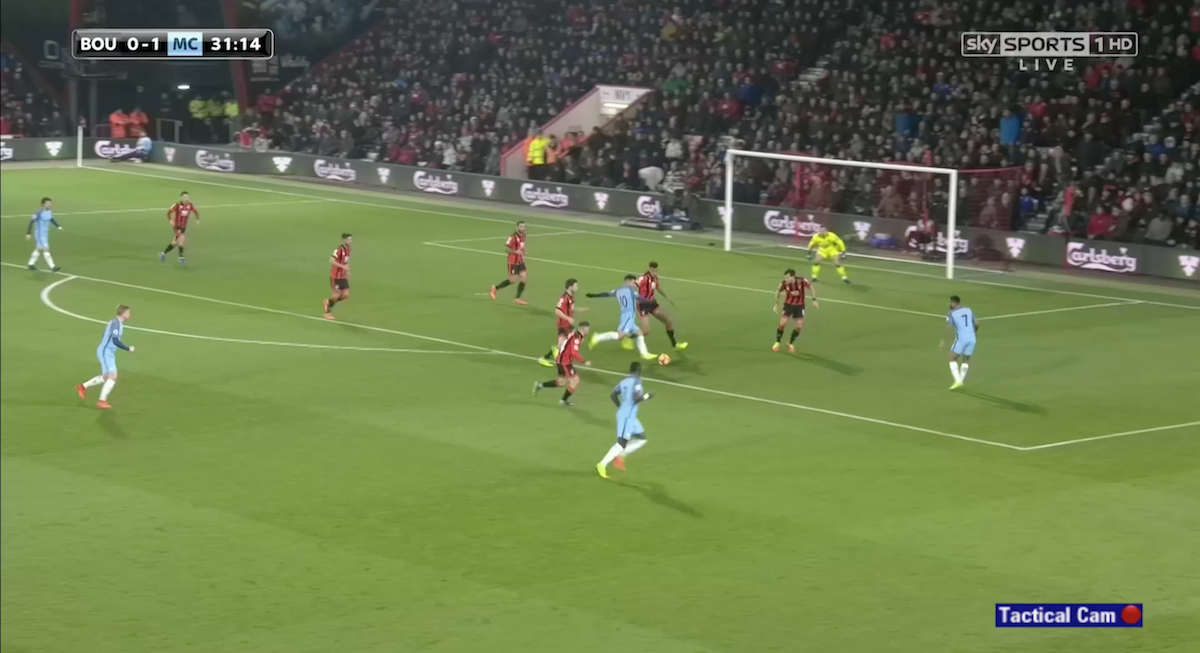 Only twice did Agüero pick up the ball on the edge of the box, three times inside the box and the rest of his involvement was on the periphery.

He had five shots on Monday, just one on target.

“He put in a really good performance. He fought and scored a goal,” Guardiola told Sky Sports after the game. “For his confidence it is so important and I am so happy for him.”

Similar to Edinson Cavani at Paris Saint-Germain, what Agüero does better than most is move without the ball.

When the ball is wide, even though you know it’s going to happen, his runs across defenders is excellent, but it’s very one dimensional.

That’s how the second goal was created and the graphic below shows how a good cross from Bacary Sagna in the first half found the Argentine forward unmarked, but just offside. 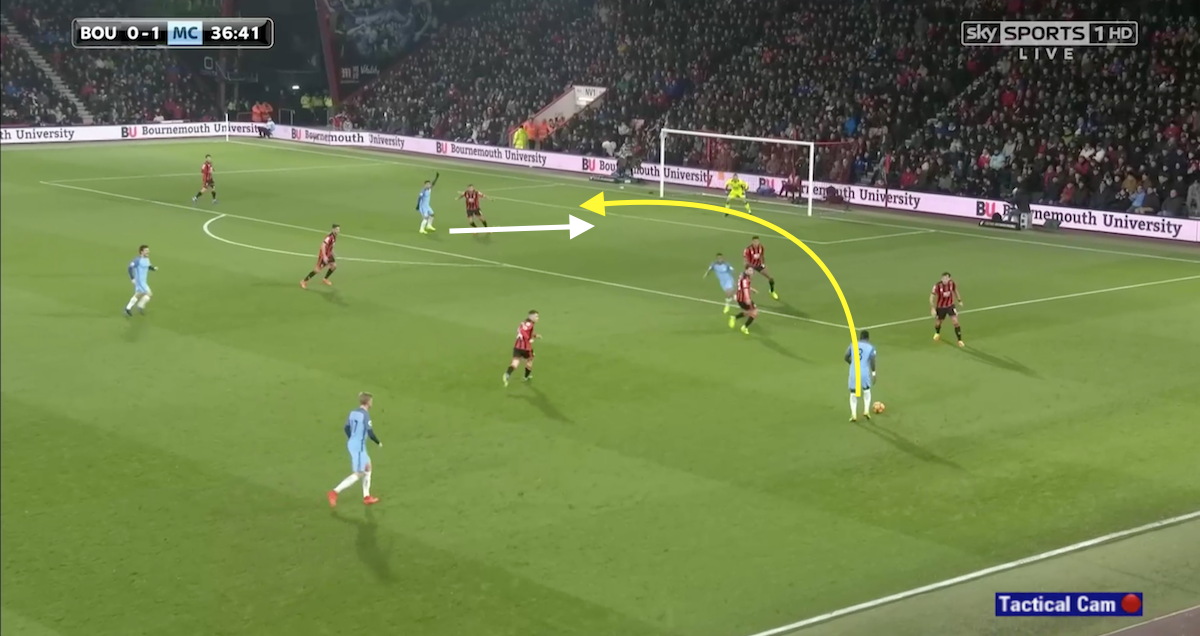 Playing in that style is not what Guardiola wants to do, plus, it also relies on excellent crossing from the wings. Something that has never been Sagna’s strong-point.

What was noticeable on Monday and in the 2-2 draw with Tottenham Hotspur at the Etihad, City also rely very heavily on the killer ball to Agüero.

Rather than look to pick the ball up in the final third and pass and move. The Argentina international is always playing off the shoulder of the last defender and demands either the ball between centre-backs or played over the top. 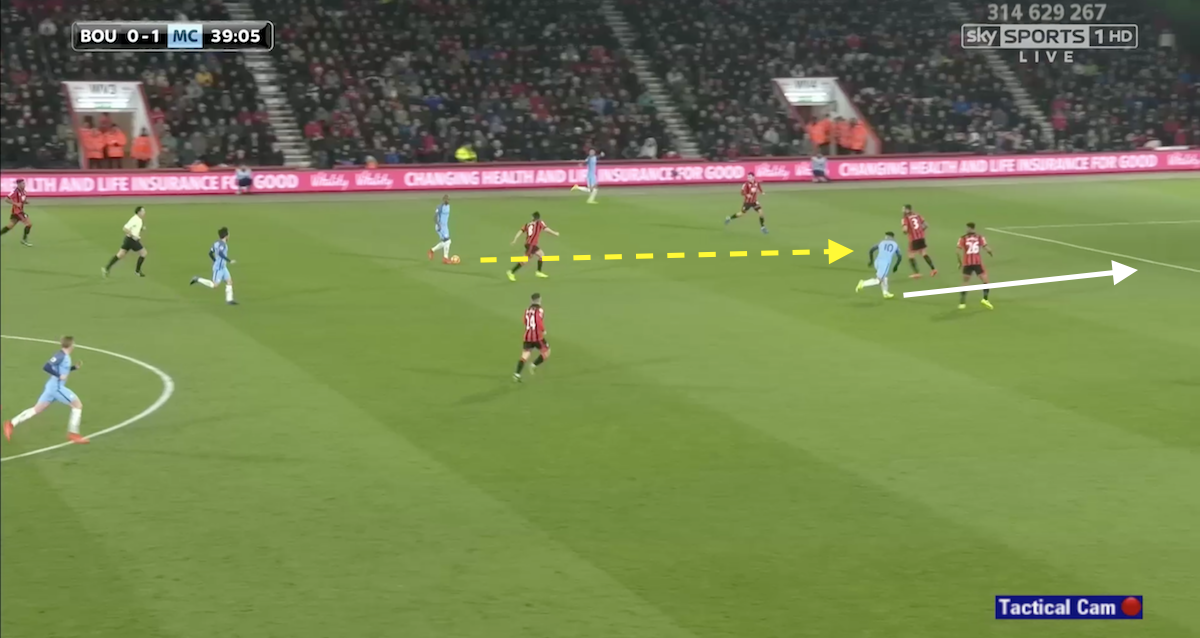 As previously discussed, in the win over West Ham, it was the closeness and combinations of the forwards on the fast break that ripped the Hammers apart.

Bournemouth defended much better than the Londoners, so in that situation, you need selfless runs and players to link-up better in order to break them down. Running into dead-ends, or just the same direct play, isn’t going to cut it.

Agüero is an excellent forward, but with what Guardiola is trying to build and the way that City have been playing so well of late, the former Independiente man just doesn’t suit.

Plenty of teams would love a player like Agüero. He would be perfect at PSG, or even back at Atleti, but at City, the Spanish boss wants more from his attack.

It’s not just the defensive work, with two tackles, the little forward worked hard and has improved that side, however, you will not change his instincts.

Gabriel Jesus, although still very young, fits the Guardiola game-plan more, plus, as he is still developing, he can be shaped and moulded by the former Barcelona man. 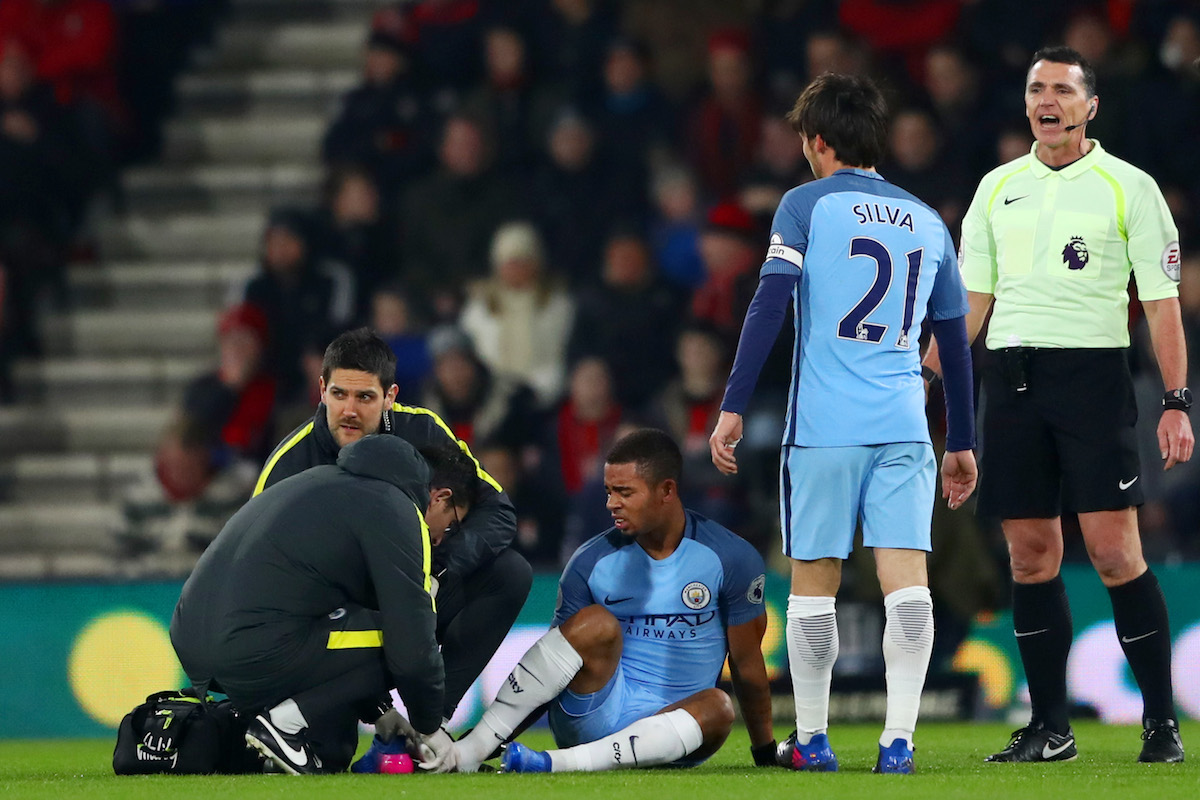 “He is a tough kid and so unfortunate,” Pep said when asked about Jesus’ knock. “I am going to pray tonight that it is not a big issue.”

Sadly, his prayers fell on deaf ears and the Brazilian has been ruled out until around Easter time.

Gabriel Jesus out for 2-3 months with broken metatarsal #mcfc https://t.co/rOyYFWgbRv

Like Batman, Agüero is a lone-wolf. That’s why, despite the firepower that the Argentine national team possess, they have never won a major tournament. You need to play to his strengths to get the best out of him.

With Jesus ruled out for 2-3 months with a broken metatarsal, Guardiola has a huge dilemma. Play Agüero and sacrifice the way he wants to play, or continue to bench the Argentine forward and look for another option.

Who said football management was easy?