They came away with yet another three points, but Manchester United were under pressure for large periods in their Premier League encounter with Southampton at St Mary's Stadium on Saturday afternoon, with the home side pushing hard to level after Romelu Lukaku's opener.

The Red Devils held out, retuning to Manchester with a narrow 1-0 victory in the bag, keeping them joint-top of the table and allowing them to turn their attention to Champions League matters and their trip east to take on CSKA Moscow on Wednesday night.

José Mourinho's men produced a solid defensive display against the Saint, with the Portuguese tactician utilising a back three in the closing stages to shore up his backline and see out the game. And the former Chelsea and Real Madrid boss may wish to revisit the same plan against CSKA.

Mourinho will be without Paul Pogba, who is likely to be out until November with a hamstring injury, and Maroune Fellaini will also miss the game having picked up an ankle complaint against Southampton.

Add in the fact that Phil Jones, Michael Carrick and Antonio Valencia are set to be rested and United start to look thin in both defence and midfield, and 4-2-3-1 would appear to be the most likely formation used.

It might seem counter-intuitive to suggest United field three centre-backs and three midfielders when they are short in both departments, but lining up in 3-5-2 could be the Red Devils' best way of ensuring a more comfortable night in Russia.

This is how United finished up at St Mary's, with Mourinho bringing on England defender Chris Smalling for playmaker Henrikh Mikhitaryan with 15 minutes to go. It was seen as a negative move from the Old Trafford boss, but the switch to three at the back ensured that, despite Southampton's pressure, goalkeeper David de Gea remained relatively under-employed.

With Jones missing, Victor Lindelöf will be in contention to start against CSKA. The Swedish central defender, a summer signing from Benfica for £31million, has looked a little shaky so far in a United shirt, as he continues to adapt to the demands of his new club. Deploying him in a three-man backline would give him extra assurance in light of what stands to be a tricky away tie.

CSKA currently sit fourth in the Russian Premier League table, seven points behind leaders Zenit Saint Petersburg after 11 games. But their 2-1 win away to Benfica in the first round of Champions League group-stage fixtures showed they can be a match for anyone.

United will undoubtedly find themselves under pressure at some point against CSKA, and the extra defensive cover, and playing an augmented, three-man midfield, will help them see through such situations, while also giving them a shape which is conducive to rapid counter-attacks. 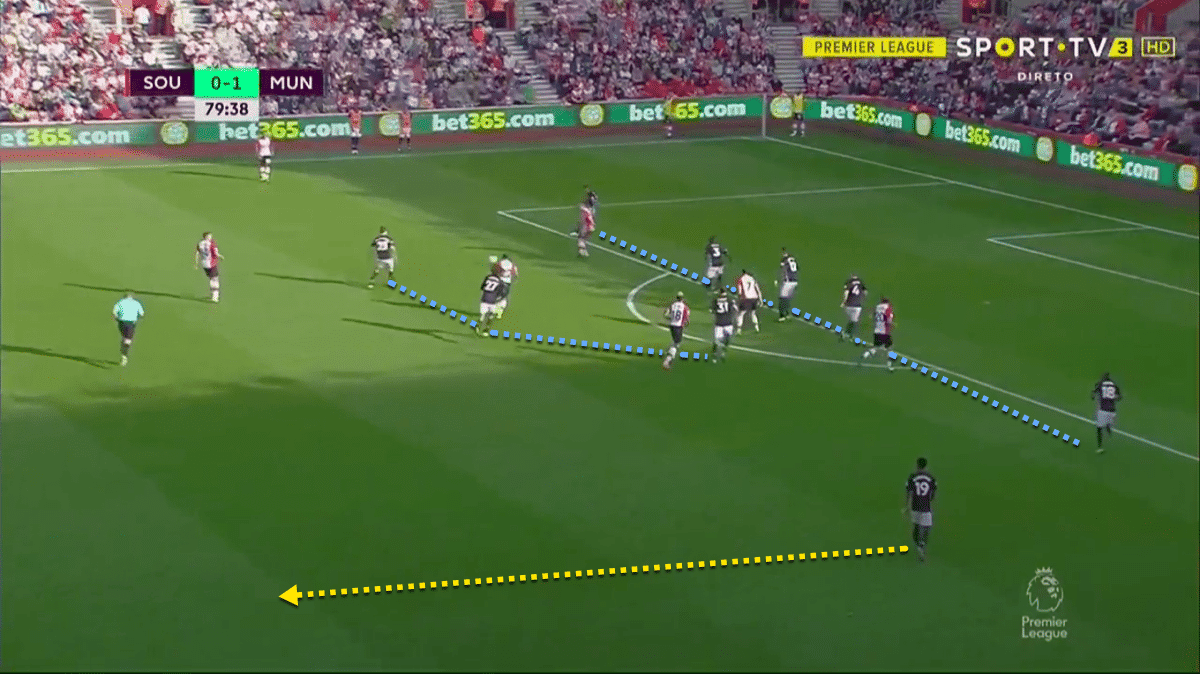 As the above image, taken from United‘s 1-0 win over Southampton, shows, 3-5-2 allows the Red Devils to defend in a low block, pulling the wing-backs in tight to form a back five, and with the midfield trio sitting in front.

And, despite the fact the wing-backs, ordinarily the primary counter-attacking outlets, are tucked in, Marcus Rashford, operating as a floating centre-forward in support of Lukaku, has taken up a position out wide to give them the chance to break when possession is won.

What's more, CSKA also line up in 3-5-2. Matching them up will make United's defensive work easier, as what is likely to be a much-changed XI will have simplified tasks when it comes to picking up their opposite numbers. 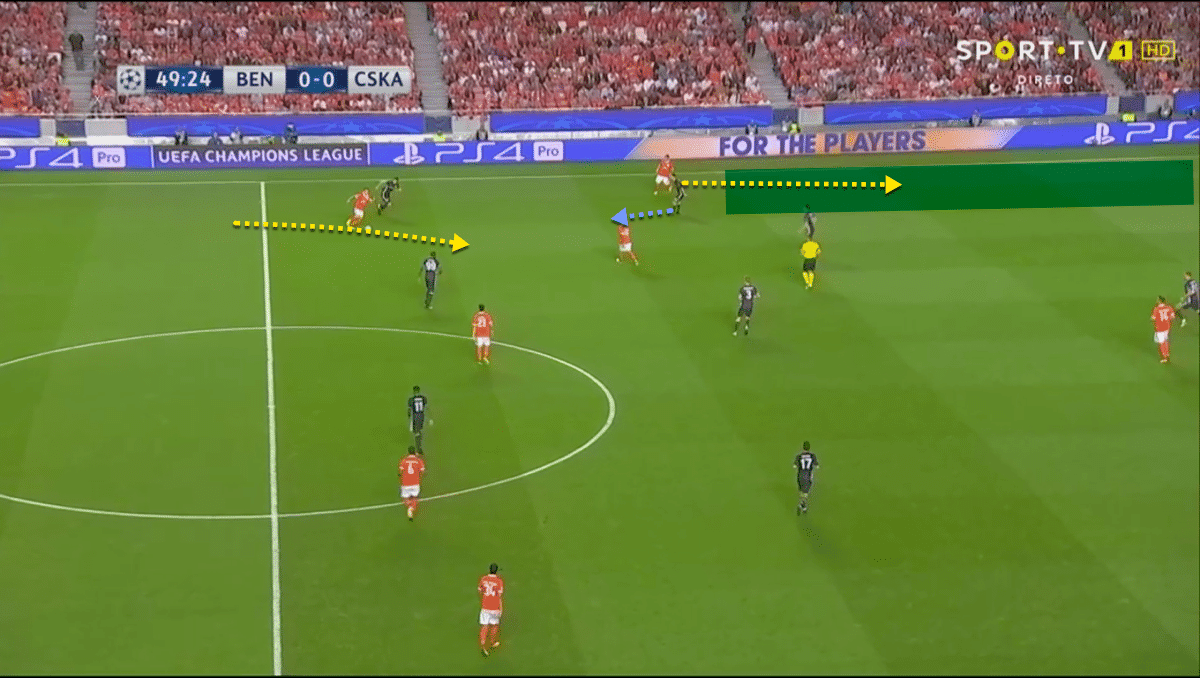 CSKA also have a key vulnerability which can be exposed by mirroring their formation. As we see above, from their win over Benfica, CSKA push their wing-backs high even when out of possession, and right wing-back Mário Fernandes is liable to getting drawn towards the ball, vacating vast space in behind (highlighted). 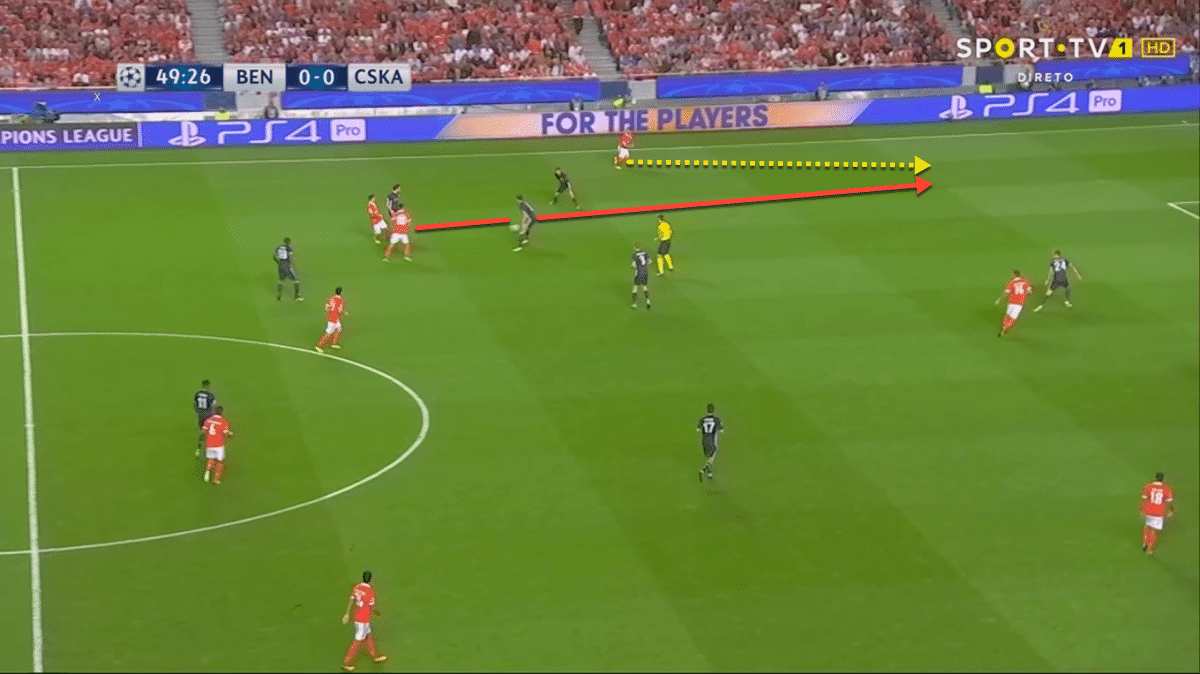 Benfica take advantage of this by sending a runner into the acreage Fernandes has left unattended, and they score from the breakaway pictured.

United, with the use of, say, Ashley Young in one of the wing-back positions – someone who is fast and a capable crosser – could exploit CSKA in the same way. Having two centre-forwards in the box in such situations will also make them a more potent threat from balls into the area – although Lukaku alone has shown himself to be dominant from crosses this term.

Even with the enforced and elected omissions, Mourinho could still field a strong back three, with at least one attacking wing-back in Young, and a midfield three of the impressive Nemanja Matić, Ander Herrera, and Mkhitaryan, with Lukaku and Anthony Martial, who is likely to start having missed out against the Saints, in attack.

Mourinho clearly favours 4-2-3-1, and it has served him well so far this term. Our Predictive Line-ups algorithm thinks the Portuguese will stay true to this shape in Moscow too, as the interactive graphic at the top of the page shows. You can click on the line-up to create your own and share it with friends on social media.

But he turned to 3-5-2 when the Red Devils were hit with an injury crisis ahead of a Europa League trip to take on Rostov last season, and his utilisation of the formation late on against Southampton shows that it remains a part of his thinking. Going with a back three could serve United well once again against CSKA.