It was the tie most Liverpool fans wanted. Of the three teams the Reds could’ve been drawn against, a trip to Italy, in the eyes of many, was by far the most favourable on offer.

That’s not to suggest Roma are pushovers. Eusebio Di Francesco’s men stunned Barcelona at the Stadio Olimpico, the same venue they took a point off of Diego Simeone’s Atletico Madrid side during the group stage. They also managed to breach a usually resilient Chelsea backline on six occasions over two matches.

When going down the rabbit hole of why, maybe, the match against Roma isn’t as kind as it first looked, the single stat which stands out is the one showing the Serie A side haven’t conceded a single goal on home soil this season.

Alisson, a top transfer target for the Reds, has been one of the best in Europe this term between the sticks. He's the best shot-stopper in Serie A and one of the main reasons they're fourth in the table. The goals against column for I Giallorossi currently reads 26 from the 31 matches they've played. However, when looking at their xGA (expected goals against) they've allowed high-quality chances worth 33 goals.

That sort of swing between goals conceded and xGA highlights just how good the Brazil international is – he's not far off David de Gea levels.

But it also reveals Roma aren't as defensively solid as it appears at first glance. For context, Liverpool's xGA this season slightly better than the Italians', and the Reds weren't exactly famed for their defensive resilience earlier on in the campaign.

Di Francesco’s No.1 hasn't been as fortunate in European competition, coming up against ruthless players. He's had to pick the ball out of his net on 12 occasions in the Champions League, five more than Liverpool. Furthermore, Jürgen Klopp's team have only conceded two goals at Anfield, both in the first match of the group stage against Sevilla.

The Merseysiders are conceding fewer goals per 90 minutes – 0.7 compared to Roma's 1.2 – and they're scoring 1.8 more goals per game, too. When the stats, which appear to make the Romans so fearful, are broken down, a trip to the the Italian capital doesn't seem quite as ominous. In fact, when the goals and big chances Di Francesco's side have conceded are analysed, it's almost a highlight reel of how not to play football against Liverpool.

The team may be in transition off of the pitch, with sporting director Monchi still yet to put his stamp on the squad and the old guard coming to terms with Di Francesco’s methods, but Roma are a team who struggle to cope with quick transitions on the pitch. Something the Reds excel at.

Liverpool are perhaps the best-equipped team in Europe to play what is essentially counter-attacking football. A turnover in possession creates that opportunity. The majority of goals Roma have conceded this term have come when they've lost the ball and haven't been able to get back into a defensive shape quickly enough. 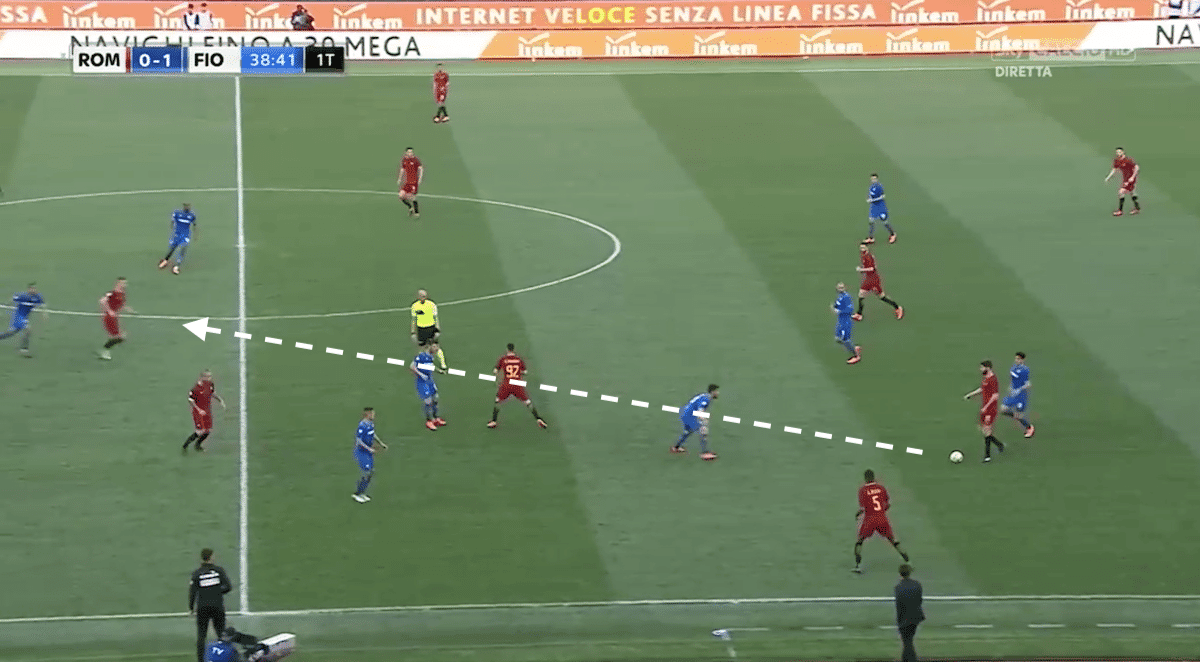 There was a clear example of this during their recent defeat to Fiorentina. Former Spurs defender Federico Fazio looks to bring the ball out and plays a fairly easy pass into the feet of one-time Chelsea transfer target Edin Džeko. The away side are looking to aggressively press those in possession and commit men to the cause. 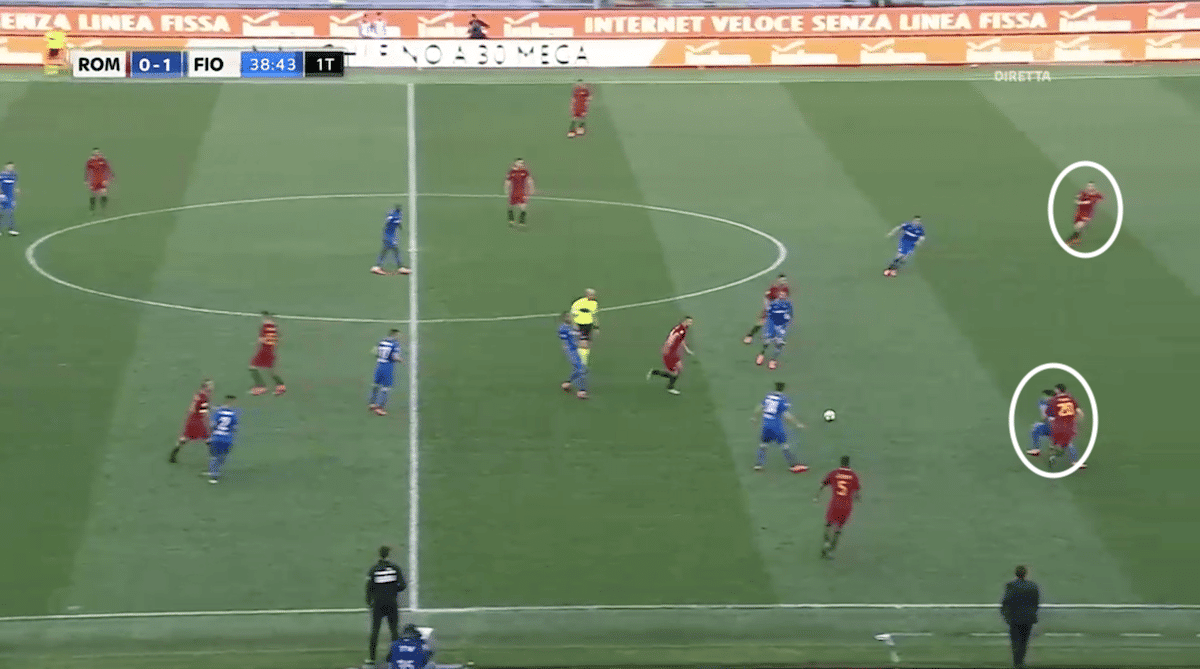 The ex-Manchester City forward, under pressure, takes a heavy touch and the ball bounces back towards his own goal. The two Roma defenders, circled, have a lot of ground to cover and four Fiorentina players are swarming the ball. It eventually finds it's way to Giovanni Simeone and the forward rides two challenges before firing past Alisson.

AC Milan, Shakhtar Donetsk and even Serie A's bottom-of-the-table side Benevento managed to make the most of Roma's struggles against presses being turned into goalscoring chances.

It's easy to understand why, too. Though Fazio has impressed since his move to the club, he's not the quickest and he's not the best when isolated. Kostas Manolas isn't the Manolas of yesteryear either. The Greek centre-back was once believed to be moving to Chelsea in a £40million deal, but murmurs of a move away from the club have died down over recent months.

The men shielding the defence aren't set up for a blitz either. Daniele de Rossi is 35 years old at the end of the campaign and Maxime Gonalons hasn't ever been blessed with pace. Liverpool just need to be Liverpool if they want to trouble their opponents. That and making sure Mohamed Salah stays fit.