Liverpool look set to be busy in the transfer market when the season ends.

According to reports in Germany, the Premier League leaders want to add Timo Werner to their ranks this summer. Reports in England claim Borussia Dortmund’s Jadon Sancho is high on their wishlist, too. At first glance, this may seem like an either/or situation. But there's a need for both players at Anfield.

And no, this isn’t a Football Manager simulation.

The Reds have one of the most fearsome trios in world football leading their line. But Mohamed Salah, Sadio Mané and Roberto Firmino aren’t ageless. They have have been near-indestructible in recent seasons but niggles have robbed Jürgen Klopp of his favoured trident at times.

The reigning European champions couldn’t call upon Firmino or Salah for last season's epic Champions League semi-final against Barcelona. The latter then played through the injury for well over a month following Hamza Choudhury’s foul on him during Liverpool’s 2-1 win over Leicester City in October while Mané has missed recent matches after injuring his hamstring against Wolverhampton Wanderers. 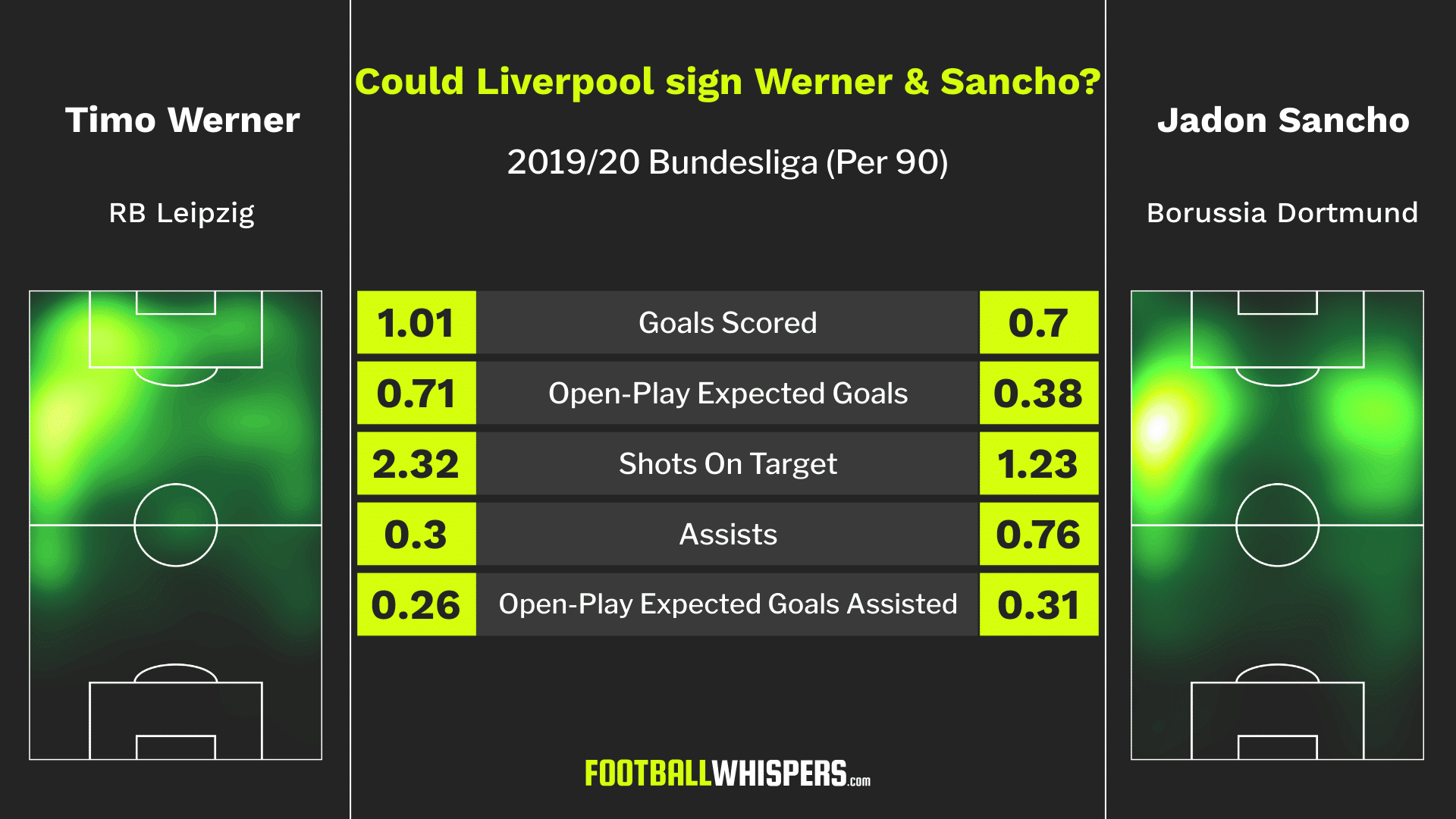 Liverpool have coped in his absence, mainly because of Salah’s exploits, but the sooner their No.10 is back, the better.

Fortunately for Klopp and his team, the injuries picked up by the forwards haven’t been severe. Some might call it luck, while others heap praise on the medical team for managing the players' workloads. However, the Reds will eventually have to address the depth issue in their attack.

Liverpool have the numbers but whether they have the quality is often a topic of debate.

While Divock Origi has proven to be the ideal super-sub and Takumi Minamino has all the makings of a perfect understudy to Firmino, if either had to play for a sustained period of time the drop-off in quality would be noticeable. The brilliance of those in Liverpool's attack regularly goes under the radar.

The reason the leaders win so many games is Salah, Mané and Firmino make things happen. None of them are clinical in the sense they need one chance to score. They don’t have to be. Everything is geared toward creating a ridiculous number of chances for them.

The Club World Cup champions couldn’t compete with that initially. But the landscape has changed. After sitting out the 2019 summer transfer window, Liverpool have money to spend. After signing a deal with Nike, Liverpool have even more money. By selling the likes of Origi, Harry Wilson and Marko Grujić this summer, Liverpool will have even more money. Enough to part with the reported £150million needed to sign Werner and Sancho.

So, the Reds have the money. They also need the pair.

Salah could well miss pre-season and the start of the 2020/21 campaign due to the Olympics. He’s also likely to miss January, along with Mané, because of the African Cup of Nations, while Firmino will be involved in the Copa América during the summer.

Even if the former Roma forward rejects the call-up to the Olympic squad, Liverpool are still Firmino-less during pre-season and will be without their No.10 and No.11 for a period after the turn of the year. There will be more minutes than usual up for grabs and that’s before taking potential injuries and the need to rotate into account.

When there’s a full squad to pick from, Klopp can still select four of the five players in his starting XI. Having one game-changer on the bench isn’t the worst position to be in. Though he’s primarily used the 4-3-3 shape since moving to Merseyside, the German tactician is fond of playing 4-2-3-1. The Reds have used it on several occasions over the past 18 months. However, when Salah leads the line, Liverpool usually lack pace on the right. But with Werner and Sancho as options, that would never be a problem again.

Werner burst onto the scene as a left-winger but moved to a centre-forward role for RB Leipzig. Paired in attack alongside a more traditional No.9, Werner is usually allowed to roam into wide areas and he does it well. He’s no stranger to playing as a wide forward and, under Julian Nagelsmann, his game has become more rounded, popping up on the right at times. His signing alone would give Liverpool numerous options.

Then there’s Sancho. Lucien Favre has utilised him on the right for large periods but he was deployed on the left earlier on this season and his output exploded. The England international can also operate in central areas, too.

Liverpool realise the true value in multifunctional forwards. It’s because of this that a squad made up of Sancho, Werner, Salah, Firmino, Mané and Minamino is entirely possible. They all have favoured positions but all can play across the front line and would be comfortable in various roles.

Previously, the Merseysiders have needed to sell star players to fund the arrival of others. This squad is different. Liverpool are in a position to sign Werner and Sancho while keeping hold the front three. They can have a season together before the club contemplate selling one of them off. Having such a progression plan in place should ensure the Reds stay at the top table of English football for years to come.