Jurgen Klopp made a big call ahead of Liverpool’s trip to the Riverside by reinstalling Simon Mignolet as the starting goalkeeper at the expense of underfire Loris Karius. The German manager made the surprise decision to drop his £5 million summer signing from Bundesliga club Mainz 05 after a week of publicly defending his number 1.

In the grand scheme of things, it was probably the correct decision. Karius was public enemy number one and anything he did on the pitch was put under a microscope. The problem though, and what’s wrong with the whole thing, is the events which transpired prior to Karius being dropped. It was a witch-hunt of sorts.

Sky Sports pundit Gary Neville claimed the 23-year-old ‘keeper ‘transmits anxiety' after Liverpool’s 4-3 defeat to Liverpool. Paul Walsh, in his weekly column for Football Whispers, spoke about why the Liverpool ‘keeper could cost them a title challenge.

The second half was a defensive capitulation from Klopp’s men. What should have been a comfortable win, after being 2-0 and 3-1 up, ended with the Reds hanging on after a Bournemouth onslaught. Karius could and probably should have done better for the Nathan Ake winner after he spilled a Steve Cook shot. But Liverpool didn’t lose 1-0.

Dejan Lovren didn’t take the opportunity to put the ball out of play and gifted it back to Bournemouth in a dangerous position, which eventually resulted in James Milner diving in and giving away a penalty for the home side's opener.

The second Bournemouth goal saw Karius effectively dive over the ball — but what happened prior was comical. At 3-1 Liverpool committed far too many men forward and got hit on the counter. Lovren was in no man's land as Wilson was played in, and the retreating Liverpool players couldn’t clear the ball after the cross came in. Liverpool were visibly rattled and, after Lovren dove in and caught Ryan Fraser, Bournemouth had a free-kick in the away side’s final third. The initial ball in was cleared but the second ball saw centre-back Steve Cook majestically bring the ball down and fire home inside the Liverpool penalty area. That’s right, a centre-back being allowed to do that in the opposition's penalty area.

The winner arrived after that man again, Steve Cook, was allowed to fire in a shot without a Liverpool man closing him down. Karius didn’t gather the ball and three Bournemouth men were the first to react.

It was very much a system failure, yet it was Loris Karius copping all of the blame in the media. There was no mention of the save he made after Benik Afobe barged his way past a shellshocked Lovren and Lucas at 3-3 (which can be seen in the image below). 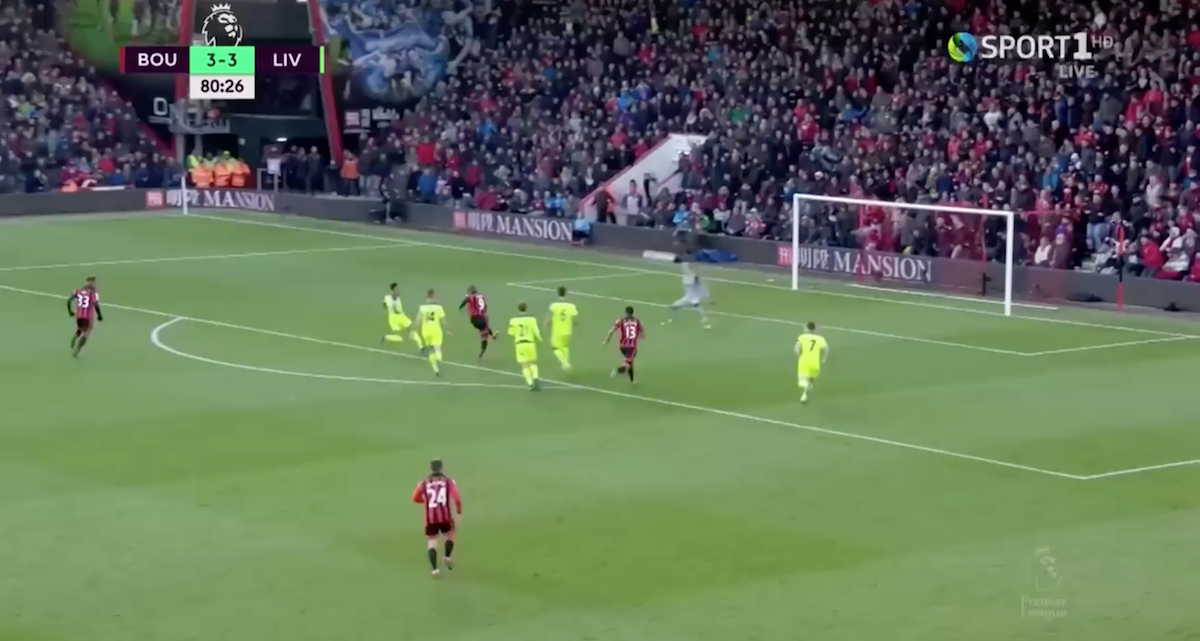 ‘Keepers are there to make saves, but the fact Bournemouth scored four times and Karius was forced into making two big saves kind of implies that the Liverpool defence wasn’t good enough.

Karius was asked about Neville’s comments in an interview –

“What critics say right after the game, I don’t know what I think. If you asked them again would they say it now? And I don’t care what Gary Neville said. He was a top player, then he was a manager for a short bit and now he is back to being an expert again.”

This prompted Jamie Carragher to tell the German ‘keeper to “shut your mouth and do your job” live on Sky Sports. Then Phil Neville implied Karius wasn’t established enough to be speaking out as he had done and, to make matters worse for the player, he conceded a soft goal against West Ham.

Karius’ response was one of a frustrated player defending himself. It also showed that he has personality as he steered away from the stock answers usually given. If he feels he’s been unfairly analysed/criticised then doesn’t he have a right to respond? He didn’t go into hiding and he continued to play his game.

Gary Neville himself acknowledged this.

Whether you agree or not with the Neville’s and Carragher, it’s their opinion and they’re paid to give it. They’re just doing their job and they weren’t the cause of this. It was those jumping on the bandwagon and sensationalising it which caused the problems.

In football there’s no right or wrong answer but this whole episode with Karius and Klopp has given pundits even more power than ever, and turned them into false Gods, because now no player is going to speak out publicly if they disagree with what’s been said through fear of the backlash. A dangerous precedent has been set when football, a game of opinions, is only allowed one opinion.

Klopp shouldn’t have been forced to drop Karius. It’s character building and player development to play through bad patches of form. He showed personality off the pitch, now let him show the same thing on it.

As soon as Karius is back in the first-team the eyes will be on him once again, and this will continue to be the case until he starts to replicate his Mainz form. But will he ever rediscover that form if he’s not playing regularly?