Why Is Ben Mee Being Ignored By England?

Sean Dyche’s Burnley are the surprise package in the Premier League this season, sitting just five points behind Arsenal and the European qualification spots.

Their success is built on a solid defence. In terms of goals scored they sit a lowly 14th in the Premier League. But when it comes to keeping them out they have the fourth-best record, having conceded just 27 goals this season.

This solidity is built around the system used by Dyche, whose team unit helps the players within it. This has seen centre-backs alled up to the England squad.

Keane’s form for the Lancashire club earned him a move to Everton, who now sit behind them in the league table following an underwhelming season which saw the manager who signed Keane, Ronald Koeman, sacked after a poor start.

While these players have seen their profiles raised with inclusion in England squads or big money moves to other clubs, one stalwart of the Burnley defence remains uncapped and under-appreciated.

Ben Mee has been part of this stout defensive unit which is currently one of the best in the league.

Sometimes players can be difficult to compare statistically as the data produced can depend on the style of play used by the teams and the league they’re playing in. But here most players and being in the same league helps with the comparison.

Aerially Mee is one of the best, despite being one of the smaller centre backs in the league at just under 6ft (180cm).

This lack of height may count against him when scouts are looking at the physical attributes when it comes to deciding if a player is right for their setup.

But though the other players mentioned so far are at least a couple of inches over 6ft, Mee emerges well, or at least on a par with others, in terms of the stats.

He wins four aerial duels per 90 minutes, and though Keane and Tarkowski come out ahead of him in this area, with 4.37 and five respectively, it's still a respectable amount.

This immediately shows that Burnley have much more aerial defending to do than other teams, given their tendency to sit back, which can encourage crosses.

In terms of passing accuracy Mee is slightly ahead of Tarkowski with 76 percent of his passes finding a team mate, compared to Tarkowski’s 72 percent. 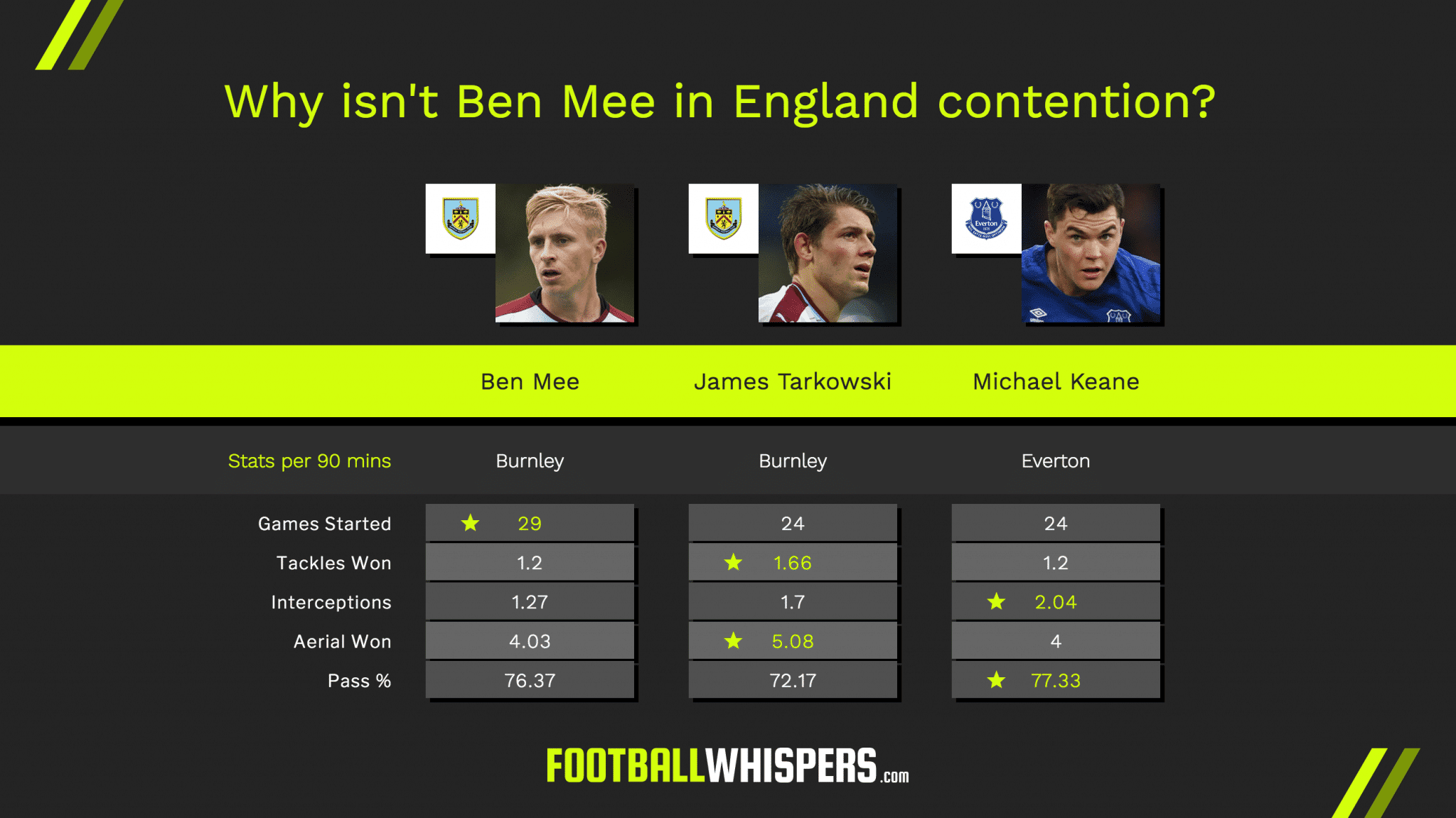 Mee commits fewer fouls per game than Tarkowski and Keane – just 0.5 per 90 minutes compared to his colleagues who've average close to one foul per game.

He also rarely finds his name in the referee's book, having picked up just five yellow cards in total from his 29 appearances this season, and is a reliable member of the first team squad, only missing three games so far during this campaign.

Statistically there are no worries, and one aspect of his game should make him stand out from the others.

The majority of the centre-backs who have been called up to Gareth Southgate’s England squad in recent times have been right footed. Though some play regularly for their clubs on the left side of defence, none are natural lefties.

The only exception to this rule is Middlesbrough’s Ben Gibson, who was called up to the England squad last June, but remained uncapped on the sidelines.

Left-footed Mee, on the other hand, has been providing good balance in the Burnley defence alongside Keane, Tarkowski and, more recently, Kevin Long, whom he partnered during Tarkowski’s time out with injury.

Despite this he remains without an international cap and is rarely mentioned in the transfer rumour pages, even though he is the unique player and has been the one constant in this impressive Burnley back line.

Burnley fans may hope that Mee remains under the radar, and if Mee is enjoying his football under Dyche, and achieving relative success as he does so, then there is no need for him to move to another club where things may not be so rosy.

Keane's move to Everton hasn't worked out as hoped, proving the grass isn't always greener on the other side, even if the contracts may be more lucrative.

Even if the 28-year-old is happy where he is and isn't angling for a move, it's still surprising not to see him mentioned among those in the England reckoning, especially when Tarkowski, Alfie Mawson, Harry Maguire and, previously, Keane are all getting recognition.