Chelsea are currently like a child after Christmas. They have money to spend and they’re not ashamed to let anybody and everybody know about it.

After the £60million sale of Oscar to Shanghai SIPG, Chelsea are two things; flush and in the market for an attacking midfielder. The Daily Mail claims Antonio Conte had scouts at Bayer Leverkusen’s recent match against FC Koln with Hakan Calhanoglu the man auditioning for the part in the Chelsea manager’s production. 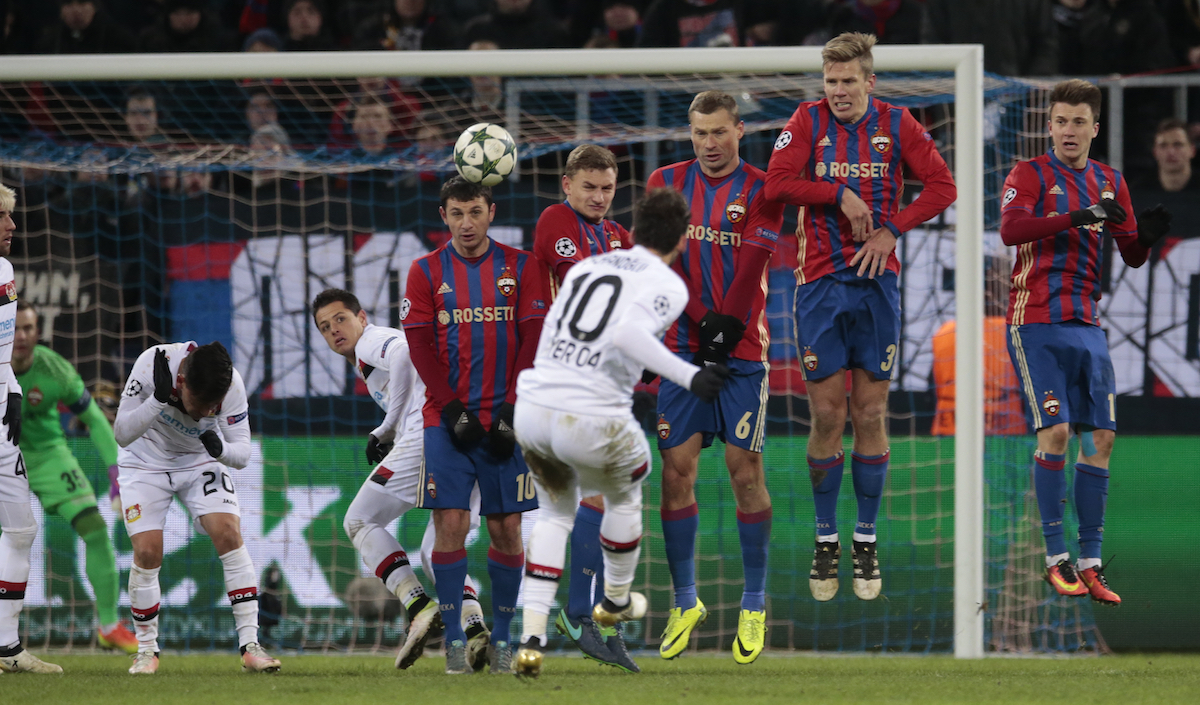 The 22-year-old has been on the radar of many of the top European clubs since his £10million move to the BayArena in 2014. Bayer used the money they received from Liverpool for Emre Can to bring Calhanoglu to their club and gave him Can’s old shirt number – 10. Controversy shrouded the move with the player claiming to be on sick leave due to stress prior to agreeing the move to Hamburg’s Bundesliga rivals.

However, back on the pitch the Turkish international has built up quite the reputation of being a set piece specialist. The YouTube videos dedicated to him show a wide variety of strikes from distance and look like any edited video which makes a player look better than they actually are.

The only difference being these videos aren’t cut to make the player look good, he genuinely is testing the ‘keeper with 30-yard efforts every single game.

The technically gifted midfielder’s contract expires in 2019 and he looks eager to move on. With this firmly in their mind, Bayer are readying to sell the player and reports suggest anywhere between £17-20 million will be enough to land him – pocket money for Chelsea in the grand scheme of things. The £50,000-per-week he earns with the Bundesliga outfit could be comfortably doubled.

Chelsea have come a long way under Conte. They’re currently on a 12-game winning streak and it’s a far cry from the mess at the beginning of the season. The Italian switched to a variation of his favoured 343 formation, one that served him well at Juventus, and the team haven’t looked back.

Their defence looks impenetrable, their midfield is dominant and their attack is rampant. It’s a well disciplined, extremely organised unit and even Eden Hazard is pulling his weight defensively. It’s the complete opposite of the shambles under former boss Jose Mourinho. Any player arriving will have to buy into this system. They’ll also need to be versatile with the Chelsea players all interchanging with one another at various stages in matches, especially the attacking three.

Calhanoglu is no stranger to playing for a manager that puts a lot of stress and pressure onto players. His current boss, Roger Schmidt, uses tactics which rely on well drilled players knowing their roles and responsibilities. Schmidt is more pressing orientated but his players need as much discipline as those Conte uses in his system. The midfield maestro isn’t one to ignore his defensive duties, he is one of the most versatile players around and is able to play on either flank as well as centrally in both midfield and attack.

In the above two pictures you see his desire to get back and help the midfield centrally. The home side have men back and in good positions but that doesn’t stop him sprinting back to cover the space ahead of the defence. He wins the ball back and his team put an end to that attack. There was no need for him to do that but he stops the Freiburg attack before they get any closer to his penalty area. That sort of desire is welcomed in a Chelsea side which is built on solid foundations. 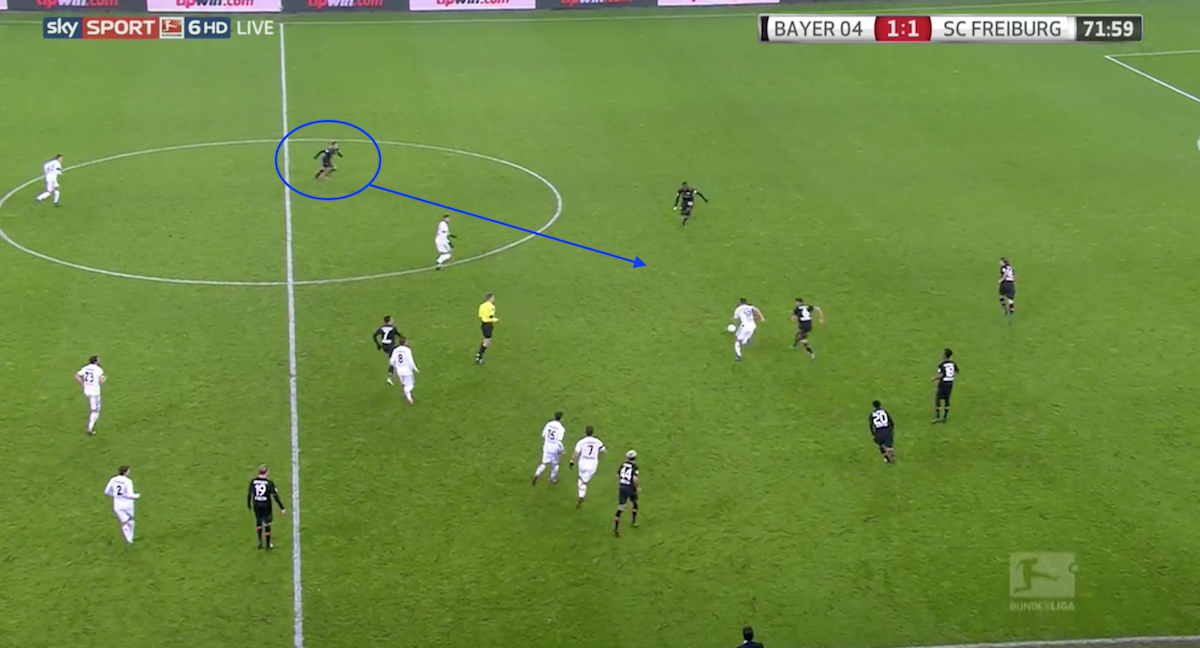 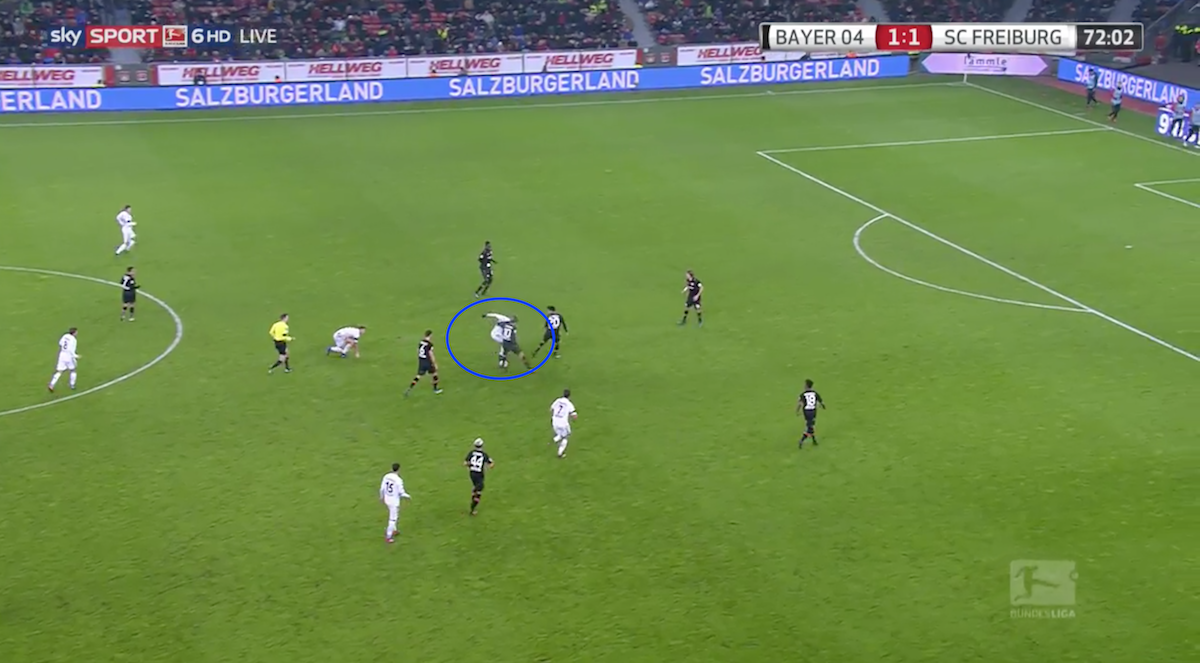 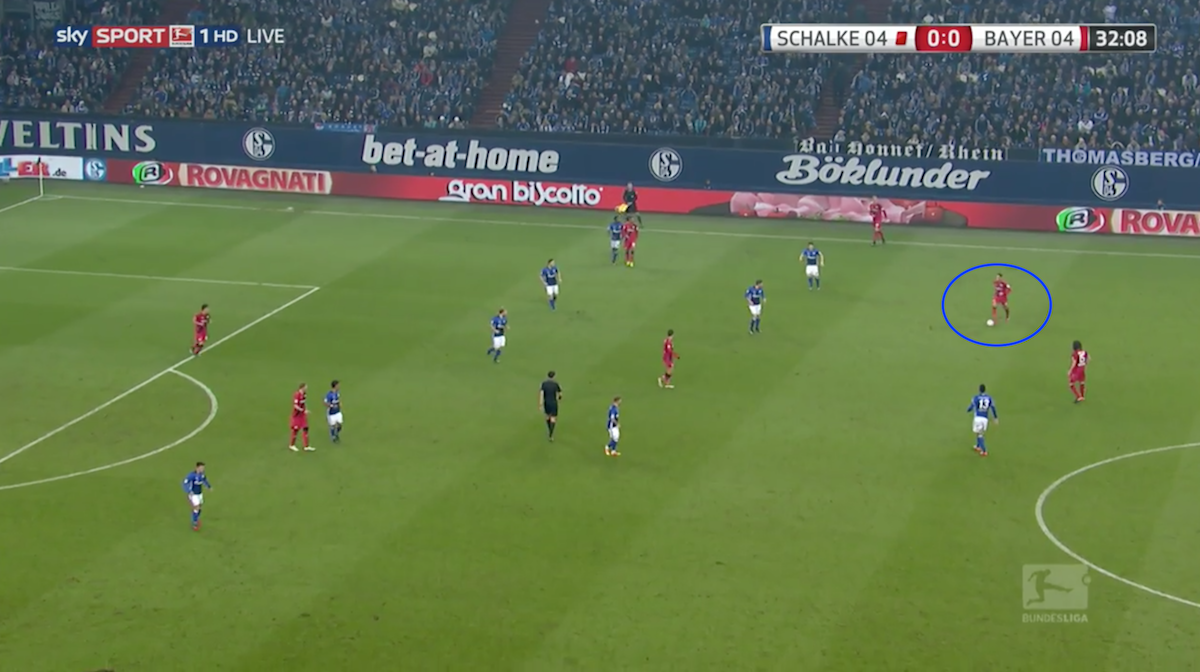 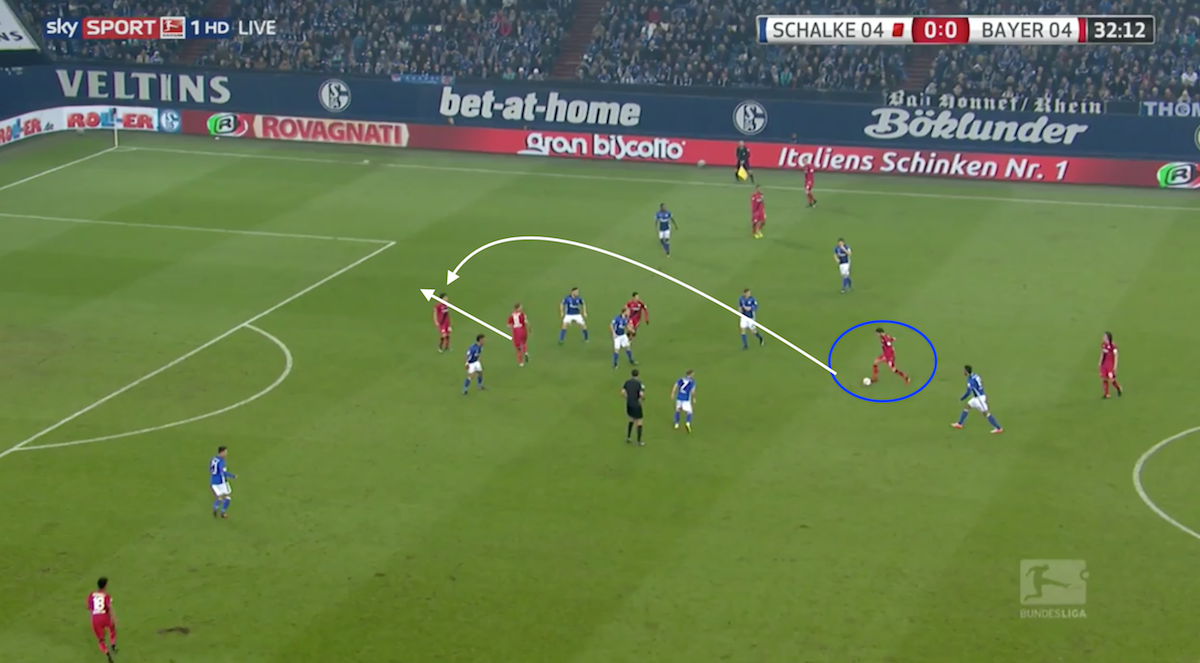 In the above two pictures you get to see his vision and ability to execute well weighted passes. Schalke, who have had a man sent off, are sitting deep in a line of five protected by a line of three. There’s not much space in between and they are also holding quite the high line. They allow him to drift centrally after picking the ball up on the right hand side, he then chips a delicious pass over the top – which takes every single Schalke player behind the ball out of the game – and creates a clear cut chance. Can you imagine the possibilities if he had the likes of Hazard, Pedro and Costa to pick out with their movement?

This season he’s completed 78.5% of the 52.2 passes he attempted and plays 1.6 key passes per 90 minutes. He’s seeing more of the ball than his Chelsea counterparts but both Willian (2.3) and Hazard (1.9) make more key passes.

Calhanoglu as a Goal Threat 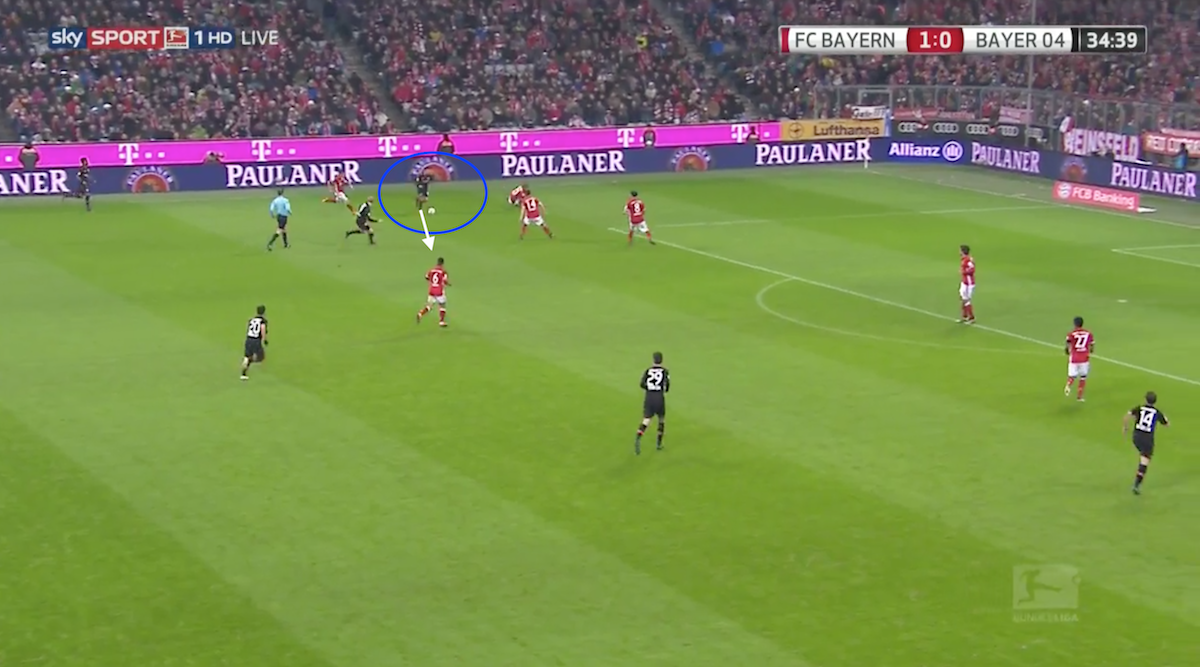 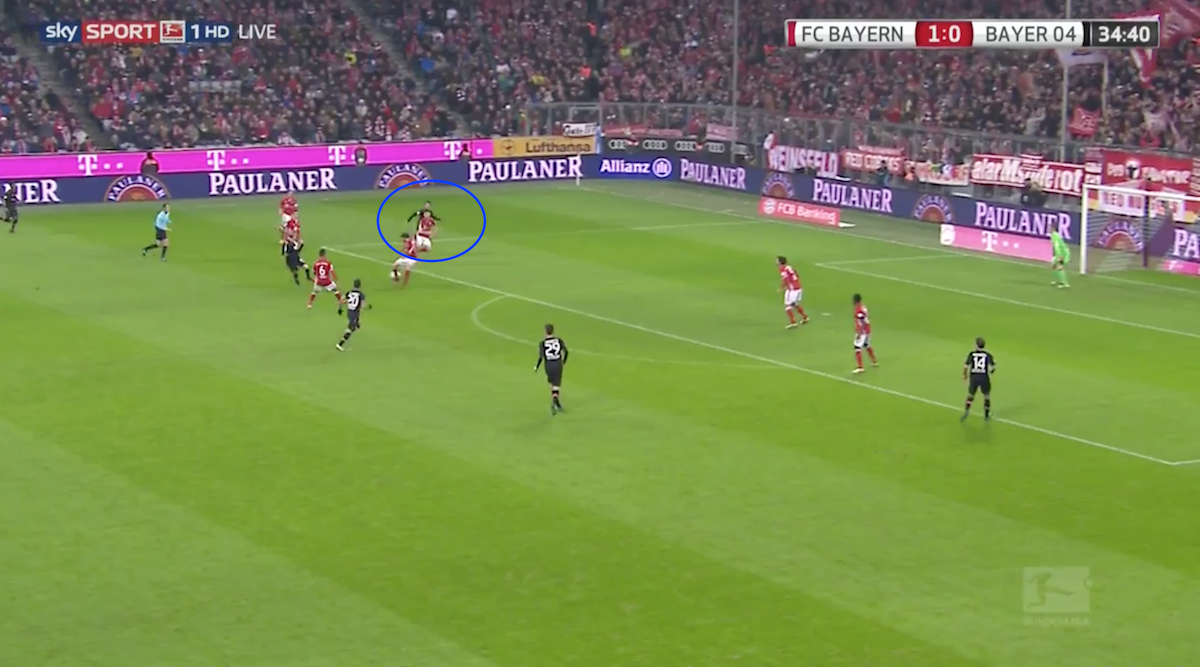 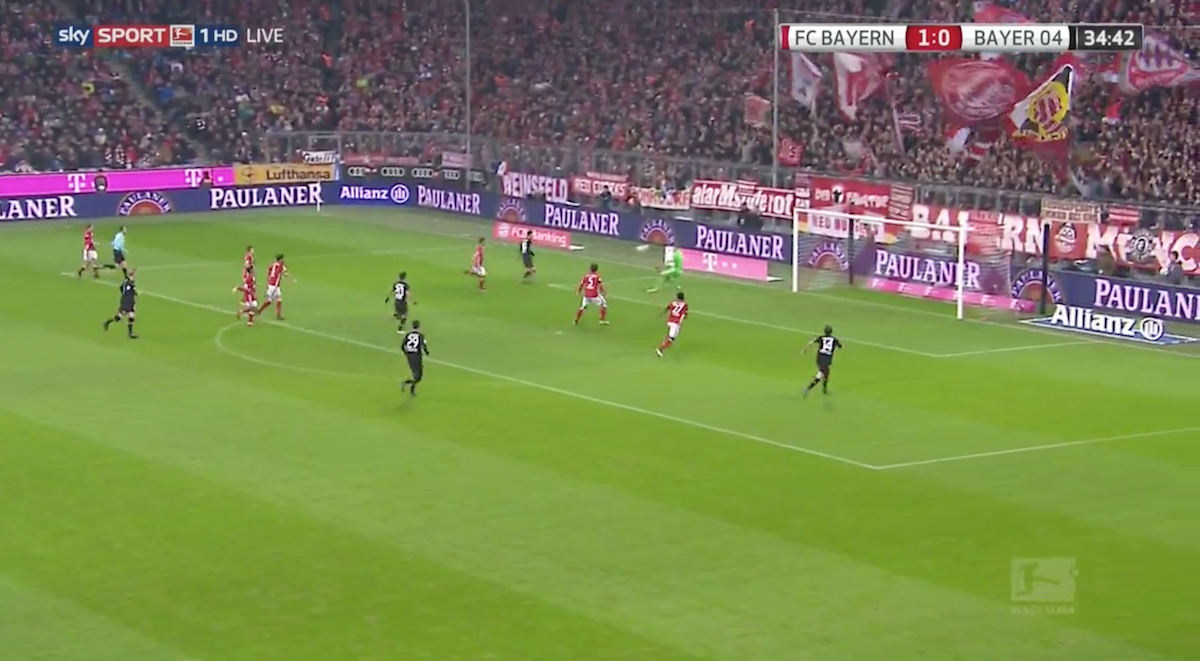 In the three pictures above you see Calhanoglu the goal threat and also shows he’s quite the big game player. Away against Bayern Munich, he picks the ball up on the left hand side and plays a pass to Julian Brandt, before continuing on with his run into the area. Brandt is able to work the ball to him and Calhanoglu, with his weaker foot, calmly fires the ball past the advancing Manuel Neuer. It was an unnerving finish from someone known more for his piledrivers.

In the past four and a half seasons the playmaker has chipped in with 32 goals to go alongside his 27 assists. He’s by no means as clinical as someone like Eden Hazard, but he is a goal threat from deeper areas and in a better team he’s only going to improve on that output.

For the reported £20 million he could be a bargain for Chelsea and it would show that as a club they’re capable of spending wisely as opposed to spending recklessly for the sake of it.