After being courted by almost every major club across Europe, Frenkie de Jong has finally decided where he wants to play his football from next season onwards.

Real Madrid, Manchester City and Juventus all made their interest known, but, after fending off a late approach from Paris Saint-Germain, it is reportedly Barcelona with whom the 21-year-old Dutch midfielder will sign.

Barça will have to fork out as much as £79million to convince Ajax to cash in on their prized asset, but in De Jong, despite his schooling some 1,500km from their La Masia academy, they will be acquiring a player naturally disposed to their traditional style.

After the success achieved under Pep Guardiola with a raft of academy graduates – from the older generation of Xavi and Andrés Iniesta, to the likes of Gerard Piqué and Sergio Busquets, and of course Lionel Messi – in the early part of the decade, Barcelona's once-prolific production line has slowed.

Sergi Roberto, now 26 years old, is the last La Masia alumnus to truly establish himself at first-team level at the Camp Nou, and there has been a shift away from flair and flow towards functionality in the Barça midfield of late.

In the absence of home-bred playmakers, there have been incongruous signings like former Tottenham Hotspur workhorse Paulinho and the dynamic yet unsubtle Arturo Vidal. 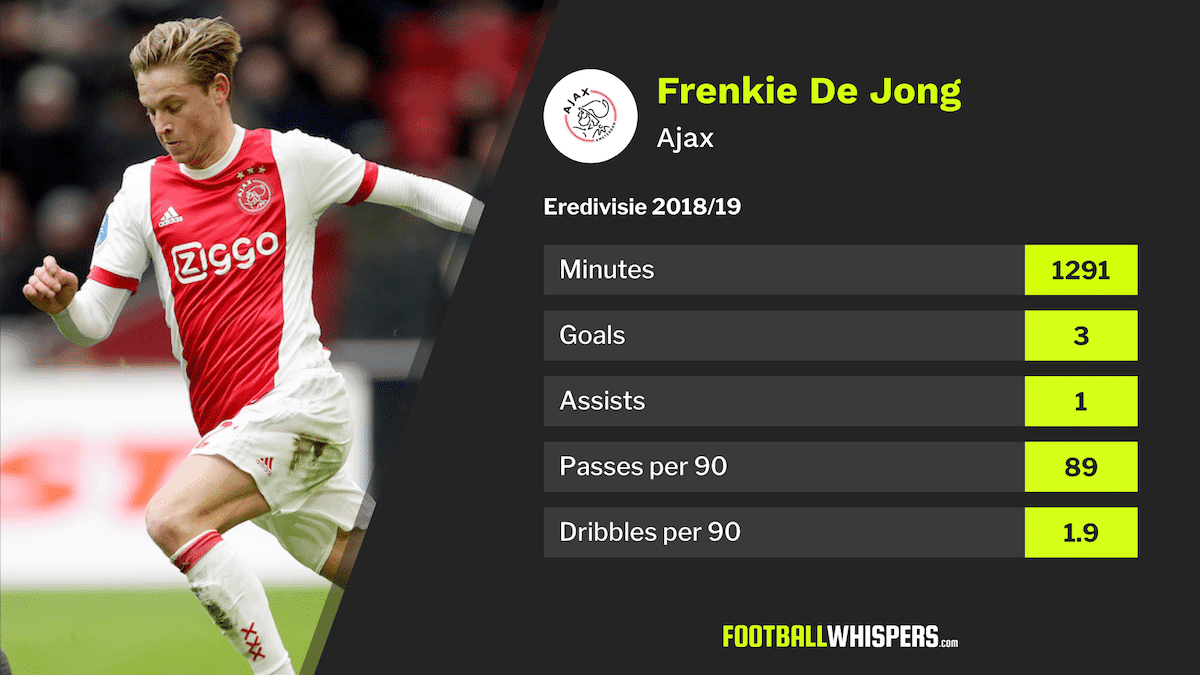 The increasing importance of Arthur, signed from Grêmio last summer, though, is an encouraging step in the direction of the club's long-established style. And De Jong will be a continuation of that, adhering to the principles of possession, movement and creativity laid down by compatriot and Barça legend Johan Cruyff.

Indeed, De Jong has been compared to Cruyff, a comparison he vehemently rejects, insisting he “will never reach that level”. Yet, while there are of course stylistic and positional differences between the two, and De Jong certainly has much left to prove before he is worthy of being considered in the same vein as the 1974 World Cup finalist, the young midfielder appears to share Cruyff's preternatural understanding of the game.

Watching him move around the pitch, orchestrating play, breaking opposition lines with his dribbles and using smart passes to manoeuvre colleagues like chess pieces, De Jong's acumen for identifying and utilising space is striking. Like Cruyff before him, he plays football intelligently and intuitively, something he discussed in a recent interview with The Guardian.

“When I am on the pitch I play on intuition but I think a lot about the game as well,” De Jong said. “With my intuition, it is not just that I receive the ball and always think ‘I’m going to do this’ straight away, even though it just happens that way sometimes.

“Most good players play on intuition. Everyone has a little but I don’t know if you can learn it. Sometimes I’m planning. I’m always searching for the pass. I’m always looking to see my teammate. ‘Is he free?’ Then you already know what to do. But sometimes the situation can change. Then you have to react and use your intuition. I try to have a picture when I receive the ball and know where everyone is. That’s one of the most important things for a midfielder.”

In this respect, De Jong recalls images of Barça great Xavi conducting his side, monopolising the tempo dial and knowing exactly when to slow things down and then quicken the pace, sucking the opposition in before tearing them apart.

Although he wasn't reared in the Ajax academy, instead signed from Twente in his late teens, De Jong has proven his ability to thrive in multiple positions, something encouraged in young players at the Amsterdam club for decades.

This season, he has starred as the deepest midfielder in Erik ten Hag's 4-3-3 set-up, but last term saw him fielded regularly at centre-back. Athletic yet slender, his build and lack of aggression, one would expect, would make him ill-suited to such a role.

But – as was the case with former Barça captain Pep Guardiola under Cruyff in the 1990s, who occasionally deputised in central defence or dropping back to augment the backline from his midfield position – De Jong's ability to anticipate patterns of play meant he was rarely caught out defensively, and he would bring the ball out from the back, confidently striding forward into midfield to launch attacks from deep.

It is these skills which have led to De Jong being seen as a potential long-term replacement for Busquets as Barcelona‘s midfield pivot, but his dribbling skill and propensity for a defence-splitting through-ball mean he is perhaps a better fit for a slightly more advanced role, possessing many of the traits that made Iniesta such a key component of Barça's success over the last decade and a half as a No.8.

With his average of 89 passes per 90 minutes, no player in the Eredivisie has seen more of the ball than De Jong this season, while his pass accuracy of 92.2 per cent suggests he is perfectly suited to Barcelona's traditional, possession-based style. And his 90.3 per cent dribble success rate was the best in the Dutch top flight last term.

Barcelona may have had to fight hard to earn his affection, and they will need to part with a hefty sum to get him, but there is something about De Jong that has always made his Camp Nou arrival, sooner or later, seem inevitable.