When Deportivo La Coruña's Romanian hitman, Florin Andone, was quizzed on all the rumours linking him with a move to the English Premier League with Sunderland, he offered a refreshing yet somewhat unexpected response.

“The Premier League does not appeal to me, it doesn't catch my eye. Right now I am at the best club in the world because I am very comfortable and Spain's my home. Even though that may sound weird,” he said.

“I am very happy here. I am not thinking about moving abroad.”

The 23-year-old was then quick to follow on by stating the immense gratitude he holds for his current employer for showing such unwavering belief in him, explaining: “Depor is a club that has bet heavily on me and given me all their affection. They opened the door and have been there through the bad times.”

“Crazy money would have to be paid to the club and me to get me out of here. It's impossible to leave, 99.9 per cent. I am very grateful.”

With the financially challenged Galician outfit forking out a hefty €4.7 million to sign him from Cordoba, it's unsurprising Andone feels indebted to Depor. Indeed, in the rather selfish, egotistical world of modern football, it's great to see a player acknowledge what a sacrifice his club made to secure his signature.

Following a wonderful season in the Segunda Division with Cordoba, where he bagged a notable 21 goals and seven assists in his 36 appearances, Depor astutely identified that he'd be a fine addition to their squad. 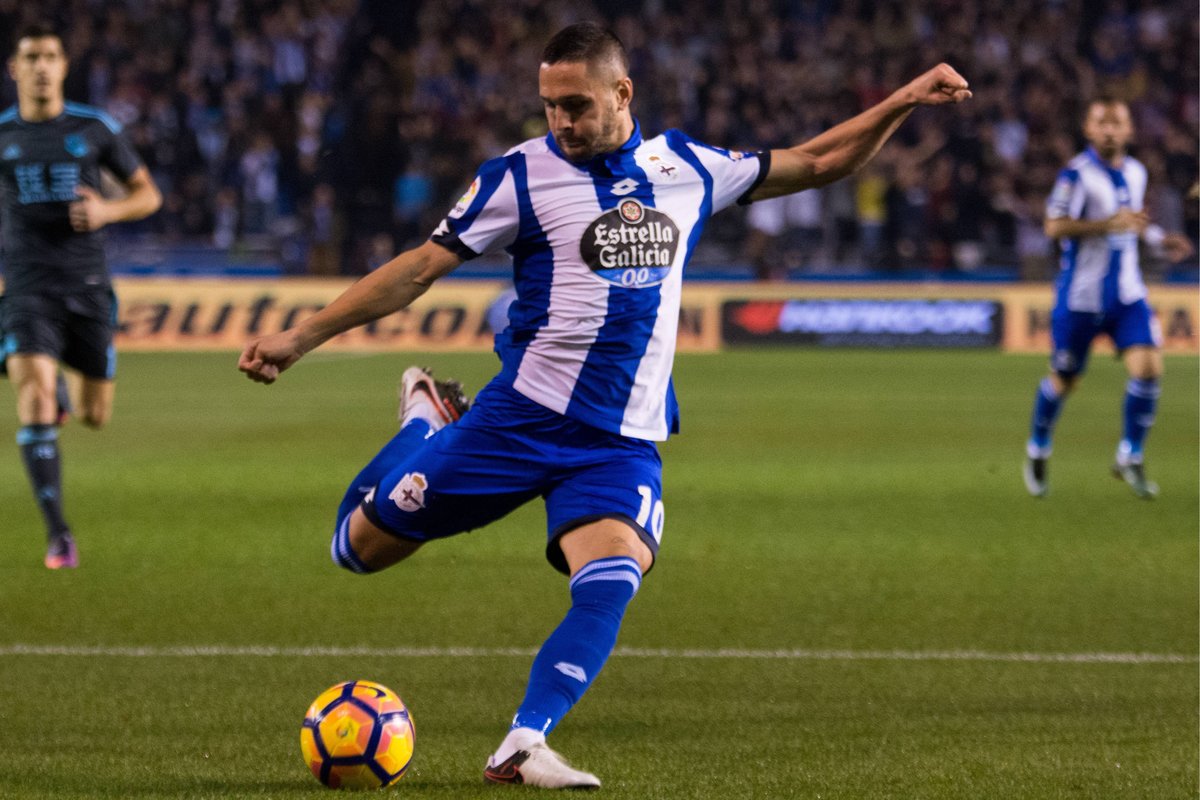 Although he endured a tough, goalless start to life at his new home, as it took him till the 5th of November to score his first La Liga goal of the campaign against Granada, but since opening his account he's embarked on a scintillating purple patch.

Thereafter, he's backed this up brilliantly by finding the back of the net versus Sevilla, Malaga, Real Sociedad (where he netted a brace in Depor's statement 5-1 win) and Osasuna. In addition, supplying an assist in the Branquiazuis' hard fought 3-2 loss to Real Madrid accentuated what tremendous form he's in.

Put simply, the scorer of six league goals in his last six games has been in such exceptional form that he's even notched up a higher conversation rate than the imperious Lionel Messi and Cristiano Ronaldo.

More than just a goalscorer

Andone's importance extends far beyond purely goals for Depor, though, as the well-rounded forward contributes superbly in all facets of the game. To start with, obviously his effect is most strongly felt on the offensive end, with his robust approach, in combination with his underrated intelligence and athleticism, making him a real handful for his opponents.

A nifty finder of space, Andone's quick to pinpoint little pockets of space in between opposing backlines that give him excellent locations from which to start his forward runs from. Moreover, by always ensuring there's distance between him and his marker, this affords him the separation he needs to start his surges unimpeded. 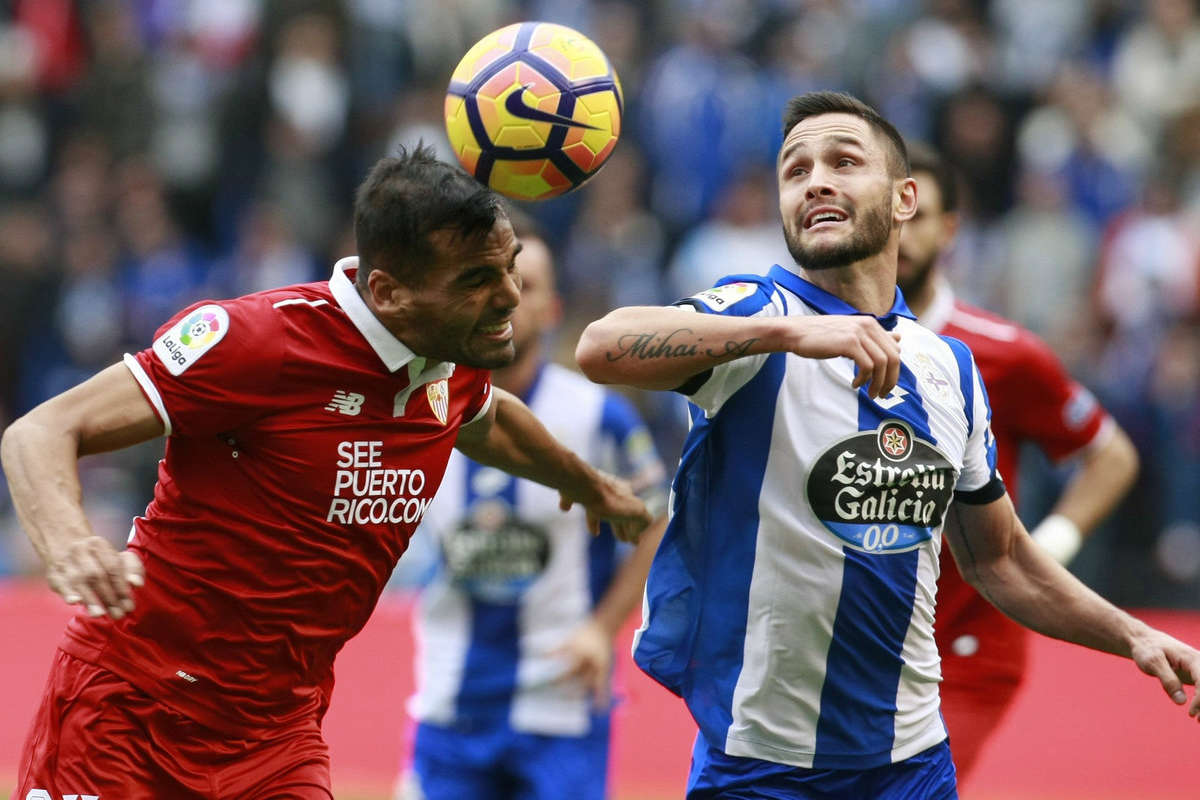 The former Villarreal youth player's ability to vary the origin of his runs provides additional headaches for his adversaries, for they can't settle into a rhythm of how best to nullify him. Being able to change direction so rapidly in full flight, this agility is another way he can gain separation from his tracker, with most central defenders unable to match him in this regard.

Courtesy of the speedy striker's enormous threat of getting in behind, this crucially forces defenders to follow his runs and not keep their defensive line, with markers not wanting to risk playing him onside. This has a great knock-on effect because it widens the space between their adversaries' defensive and midfield lines, thus creating vital space in and around the number 10 area for the likes of Emre Colak and Depor's often indented wingers, Carles Gil and the now recently departed Ryan Babel.

Another way that the Botosani-born flyer enables himself to have in impact is via his strong interactions with his teammates. Aside from his complimentary and damaging partnership with Turkish attacking midfielder Colak, Andone's understanding with his indented wingers, chiefly Babel, is a further avenue that sees his influence amplified.

It's been a common theme to see Babel dropping deep towards the halfway line in search of possession, which vitally drags his fullback with him, and subsequently opens up the channel for Andone to spring into the vacated space and latch onto through balls. Furthermore, this clever, well coordinated tactic also rips apart the opposing defensive structure by forcing a centre-back to track Andone and subsequently create dangerous space in the centre for his teammates to take advantage of.

Gaizka Garitano's desire to instruct his wingers to venture infield to often overload central areas also means that there's a higher possibility that Andone can latch onto through balls due to the confusion it causes among markers and the fact his fellow attackers are in close proximity to one another.

His vigorous pressing and aggression on the defensive line only serves to amplify his worth to Garitano's side, as he does a fantastic job of making life very uncomfortable for those who look to pass out from the back against Depor. Completing roughly two successful defensive actions per game and committing nearly three fouls a game suitably evidences his tigerish and, at times, overzealous stopping exertions.

While many at Depor were wondering how they could possibly find a replacement for their 17 goal hero from last season in Lucas Perez, who moved to Arsenal for £17.1 million last August, Andone's rapidly going about displaying that he can adequately fill the void.

Having played for five teams in the last six years, Andone, who significantly also holds a Spanish passport, finally appears happy and settled within the confines of a club that fully appreciates his qualities. Despite this being bad news for Sunderland, it's heartening to see a player show such tremendous respect towards his side.

In Depor, Andone has unquestionably found a perfect home.