Everton should take advantage of the uncertainty surrounding Lucas Pérez’s long-term future at Arsenal. The Toffees targeted the striker in the summer but missed out on him when he opted to ply his trade at the Emirates as opposed to Goodison Park.

The Gunners parted with £17million to secure the signing of the former Deportivo La Coruña man but a combination of factors; Pérez being injured coupled with the form of both Alexis Sánchez and Olivier Giroud, has meant he’s made just the two Premier League starts this campaign.

It’s because of this, the lack of playing time, that Arsenal may have a challenge on their hands to keep the Spaniard this summer.

He arrived in England in the form of his life having netted 17 goals and grabbing a further eight assists  during his final season in La Liga. He was scoring, creating and he almost single handedly kept Deportivo in the Spanish top flight. His form lead to him being link with a move away with Barcelona being mentioned.

It appeared as though any hope of seeing Pérez in blue was dead but the player’s agent, Rodrigo Fernandez Lovelle, has fanned those dying flames with comments to Italian publication Calciomercato. 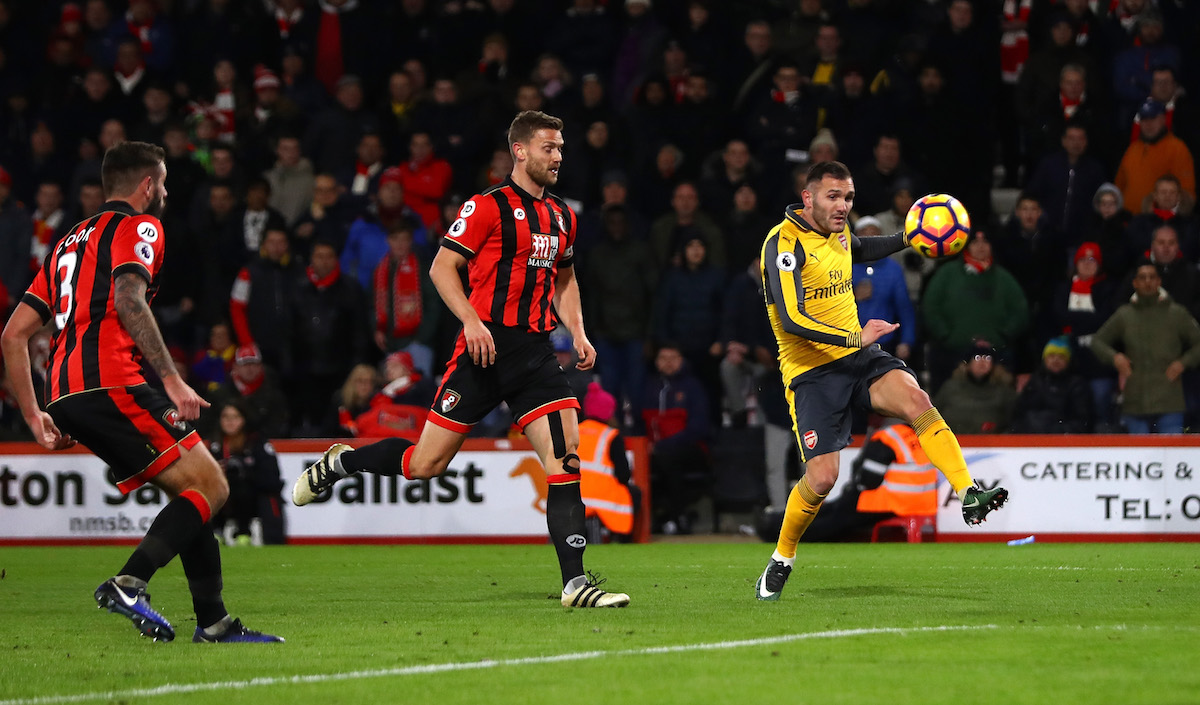 Lovelle admitted that Pérez wants to leave the club ‘at all costs’, and slammed Arsenal boss Arsène Wenger for his handling of the player since his arrival from Deportivo at the start of the campaign.

“He hasn’t received any offers yet. If Lucas leaves London – and he will leave because he’s had no chance with Wenger – he wants to go and play for a big club like Arsenal.

“Look, the truth is that Lucas wants to leave at all costs and is not happy at Arsenal, he hasn’t settled and hasn’t had a chance to play and show what he can do.

“No matter who is the manager in the future, we want to go. The player must have the opportunity to play.”

Lovelle has a point. Pérez should have the opportunity to play. Whenever he’s been called upon this season he’s delivered one way or another. Wenger said as much in his post-match Sutton interview.

“He is pushing on the door but I have many strikers,” he said.

“I have Giroud, Welbeck, Walcott, Sánchez and Pérez. It is true that he deserves a go because he scores goals and is a good player.”

He netted twice against Nottingham Forest in the EFL Cup, grabbed a hat-trick against FC Basel in the Champions, scored a goal in the comeback against Bournemouth in the Premier League and opened the scoring against Sutton in the FA Cup. 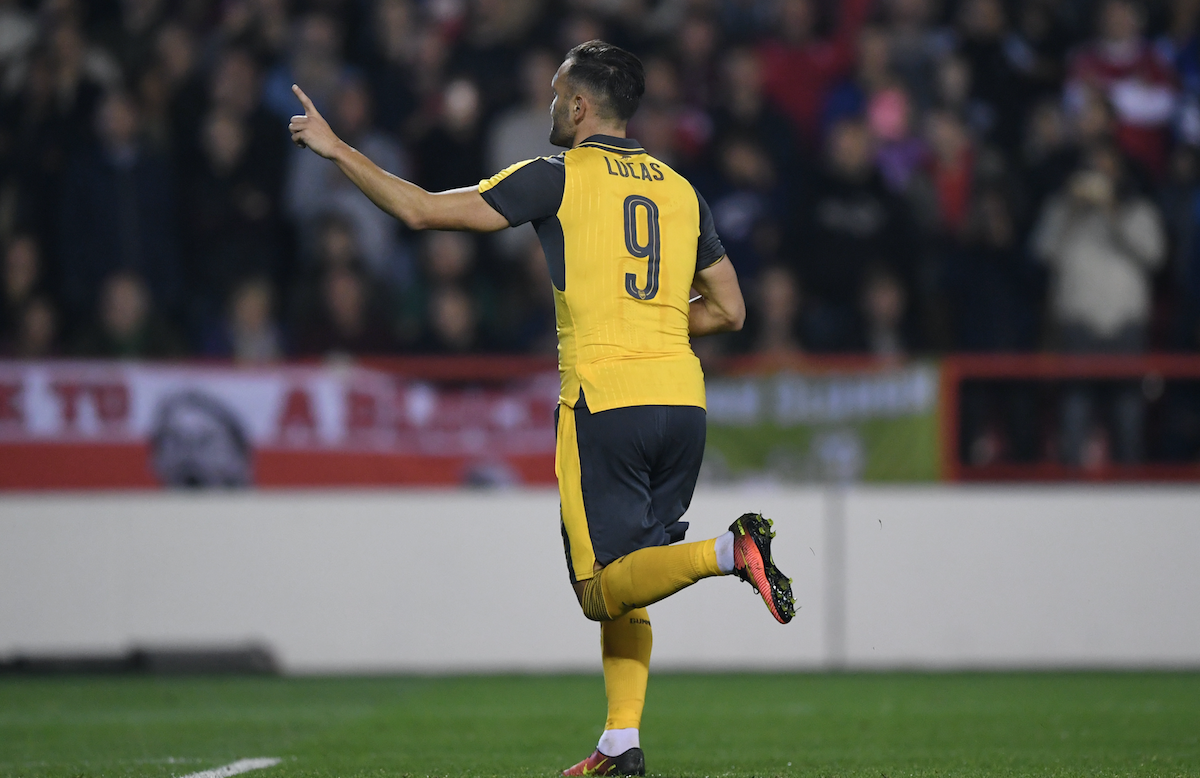 He’s also contributed in terms of assists with two against Ludogorets and one each in games against Southampton and Preston North End. Seven goals and three assists as a bit part player, what could he do as a starter?

However, Lovelle then made a sensational U-turn by revealing to Sportsmail that the forward was still keen to succeed with the Premier League giants and insisting he had no plans to move.

“When one does not play he is not happy but we knew it would be difficult and it is a long contract.

“Lucas has this contract with Arsenal and he wants to succeed there. No-one has spoken of a move.”

Regardless of his best attempts to put the fire out, it’s clear there are issues between the player and the club meaning there’s an opportunity for clubs to make the most of the situation.

Why Everton should reignite their interest in Perez

Italian news outlet Il Messaggero claim AC Milan have expressed an interest in signing Perez this summer but they won’t be alone. The Mirror claimed Lukaku could be re-signed by Chelsea in the summer with the future of Diego Costa still up in the air. 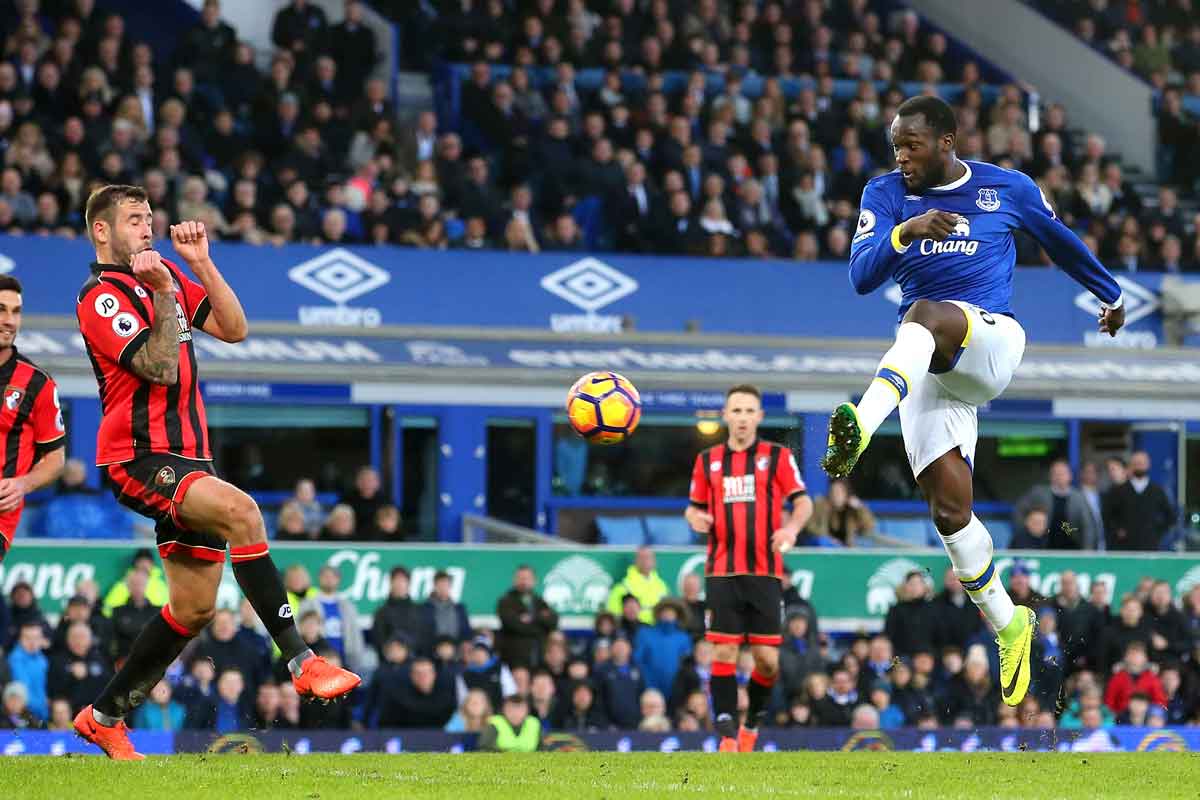 READ MORE: WHY ROMELU LUKAKU IS NOW ONE OF THE BEST STRIKERS IN EUROPE

Whether or not Ronald Koeman moves for the striker shouldn’t hinge on the Lukaku’s future. His side need depth in that area so they aren’t overly reliant on the Belgian, but not just in terms of quantity but quality too.

They need a versatile striker capable of leading in the line in the absence of Lukaku but also one who is able to play alongside and supplement the former Chelsea striker. Pérez ticks both boxes.

The Arsenal number nine has a variety of strengths but one of the most underrated ones is his ability to link play. To him to be fully appreciated he needs runners around him and he would get that at Goodison Park in the form of Yannick Bolasie, Romelu Lukaku, Ademola Lookman, Kevin Mirallas and Ross Barkley. 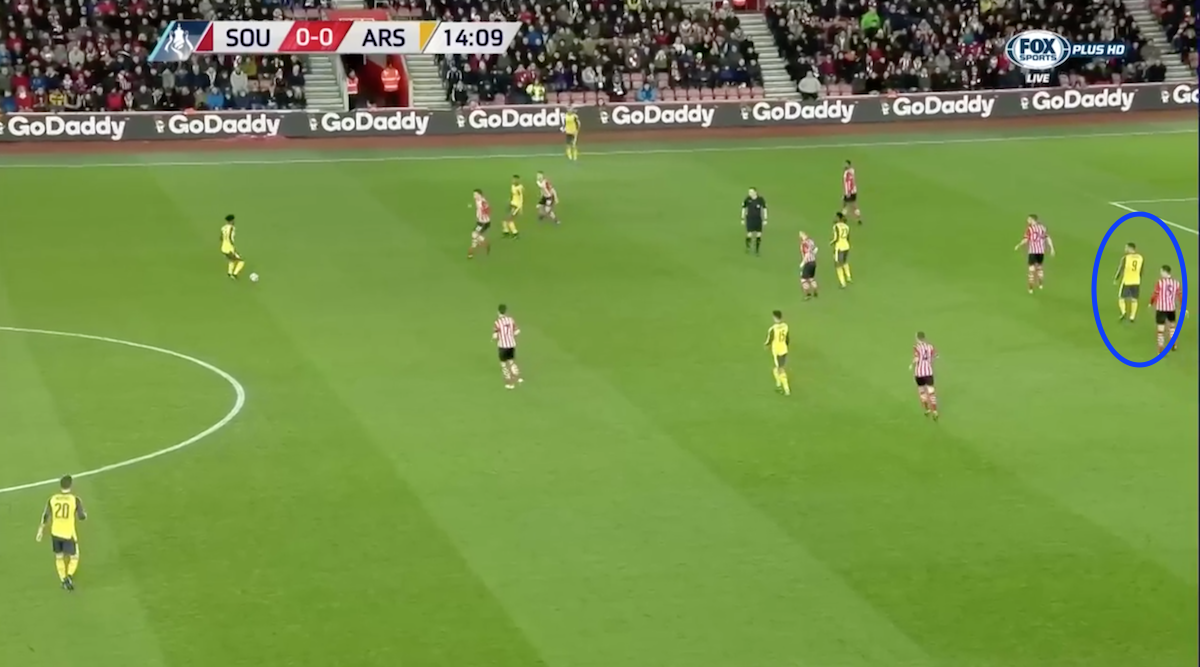 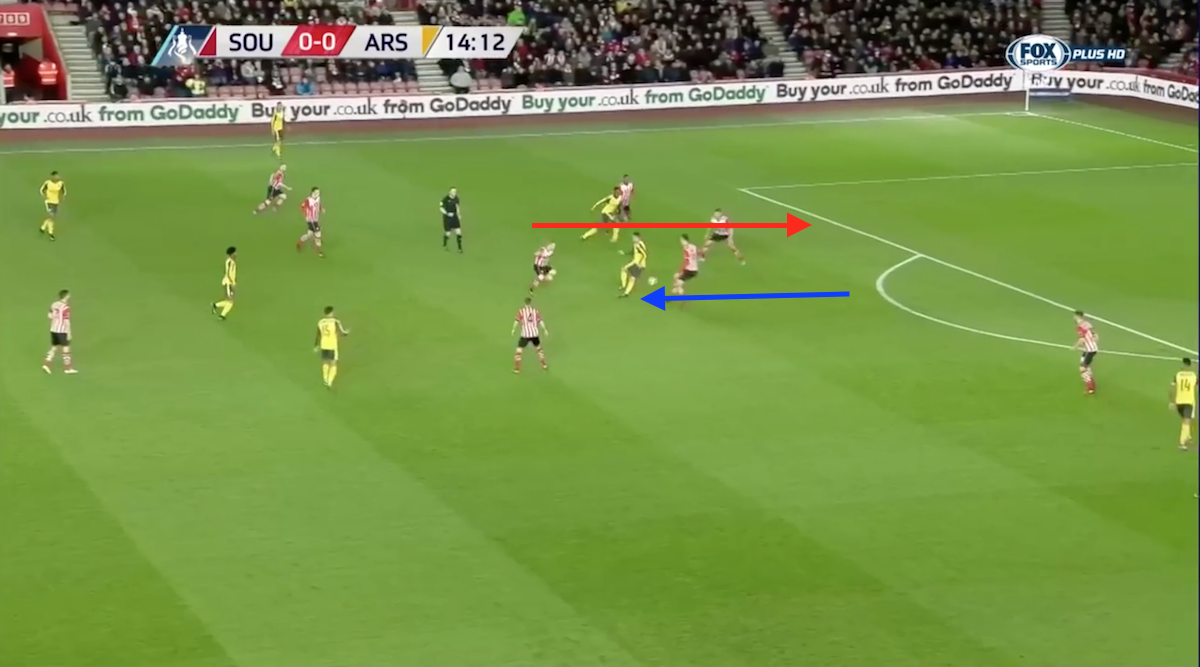 In the two pictures above you see Pérez's involvement in the opening Arsenal goal. In the first picture you see him position himself between the Southampton centre-back pairing.

He then drops deep to offer himself up for the pass and because of the movement around him he's able to play a delightful ball around the corner which puts Danny Welbeck in for the opener. It's simple movement on the part of Pérez but it shows he's aware of what's around him as well as emphasising the fact he's not a lazy striker. 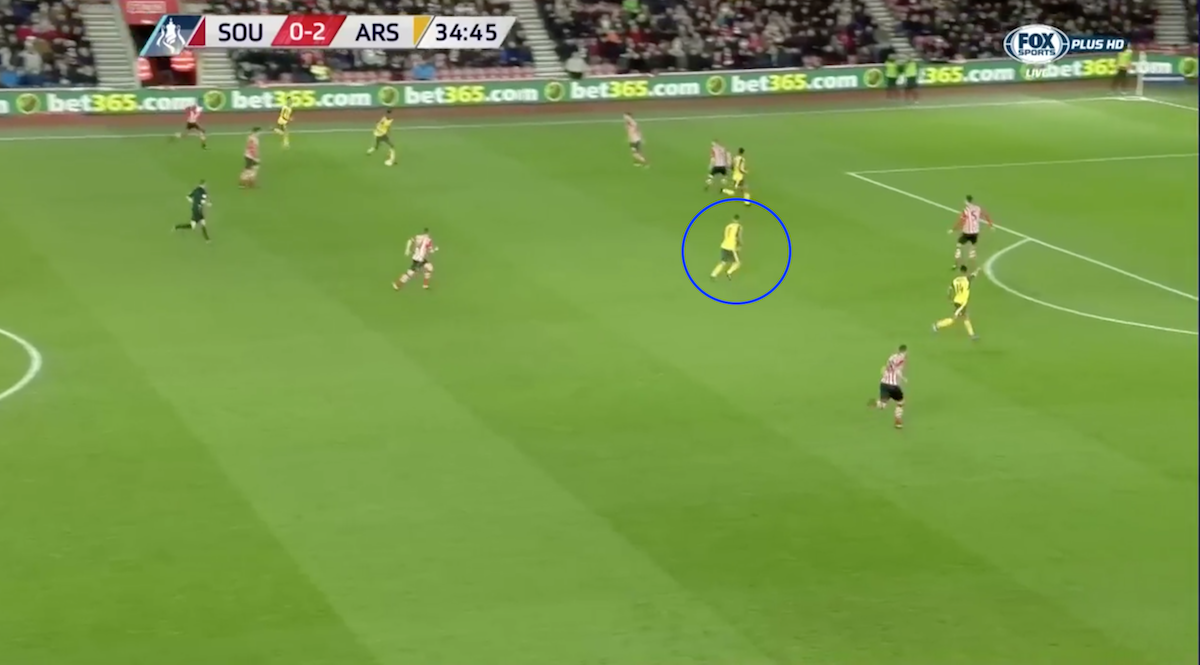 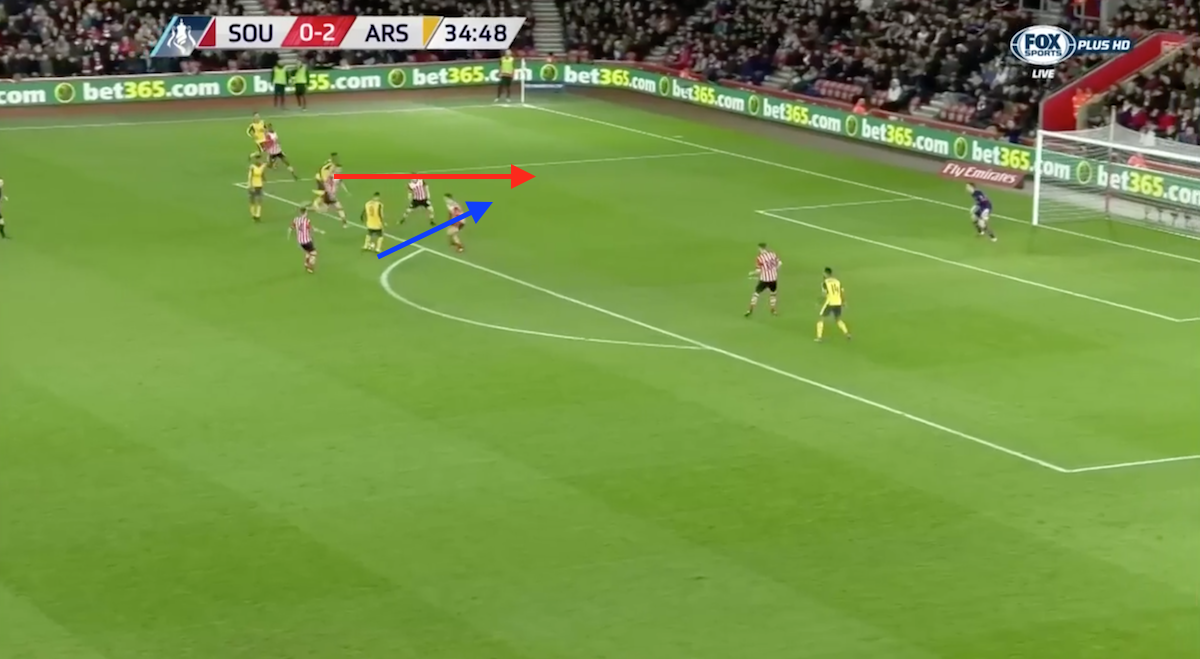 Again it's from the FA Cup tie against Southampton and again you get to see Pérez's intelligence. He finds himself in a lot of space as the attack builds and this isn't by chance. He holds his position purposely.

The ball finds him and because he's in space he's able to take a touch before threading a ball through the Southampton centre-back pairing and into the path of the player making the run from deep. The ball is played back across goal and Theo Walcott is able to tap home.

There's no reason he couldn't be pulling the strings like that in the Everton attack. He could play beside, ahead or behind Lukaku and it could be a pretty prolific attack.

He's reportedly on £70,000-per-week at Arsenal and Everton could comfortably match those wages. They reportedly pay Mirallas the same weekly figure with Bolasie being on £80,000-per-week. He should top Everton’s summer transfer targets list. He could be the difference maker next season.

Why not check out Episode 12 of Football Whispers TV?