Paris Saint-Germain are thinking big this summer. The French giants are closing in on a deal that should see Brazilian superstar Neymar join for a deal worth around £200million.

In order to satisfy the Financial Fair Play regulations, PSG may need to recoup some funds to accommodate the arrival of the Barcelona star.

Ángel Di Maria been linked with an exit away from the Parc des Princes, Serge Aurier is a Manchester United transfer target, but Inter Milan have now joined the race to sign one of the club's most promising youngsters.

Pushing for an elite place at top of the Champions League pyramid, the Parisians are obviously ambitious but with Liverpool and Everton and now the Italians showing interest in young centre-back Presnel Kimpembe, they will need to be careful not to weaken their defence while searching for attackers.

Now 21 years old, he made his debut in 2014 coming off the bench in the 3-1 win over Lens. Showing patience, he knew he was playing back-up to Thiago Silva, David Luiz and even the already frustrated Marquinhos.

After Luiz made his return to Chelsea, Marquinhos went from 20 to 27 starts and deservedly, the French prospect was named in the XI 19 times last term.

It may have been a disappointing season for the Parisians under Unai Emery – finishing second is a poor return for PSG – but for Kimpembe, it was a breakthrough campaign. A regular in the France Under-21 set-up, he was also called up to the full squad, although he's still to make his senior debut.

RMC Radio reported on two weeks ago that both Liverpool and Everton are heavily interested in signing the youngster this summer.

Impressing against Barcelona in the Champions League, the Merseyside clubs obviously believe he would be ready for the rigours of English football.

Luis Garcia on Liverpool Winning The Premier… by FootballWhispers

The French radio station also suggest PSG have no interest in letting the centre-back leave at any price and that point was backed up by signing him to a new deal until 2021 in November.

Why would Everton take interest?

Although they have already bought Michael Keane from Burnley, with Phil Jagielka and Ashley Williams both over the age of 32 years old, there’s no harm in looking to the future. Especially with a player who is ready to contribute now.

Ronald Koeman is trying to build a squad to battle against the top six for a place in Europe. Kimpembe would not only be an excellent signing, but he would represent a statement of intent. The ability to poach a talented youngster off one of Europe’s strongest teams cannot be downplayed.

Compared to Keane, Kimpembe would be the ball-playing member of the potential duo. The former Burnley man makes 7.4 clearances per 90 minutes, and wins 4.3 aerial battles. That would be expected in a team like the Lancashire side, when in the majority of games they are facing stronger opposition, yet the Manchester United product still managed to impress.

The Frenchman makes more than double the amount of passes, but completes a higher percentage too. His long balls are a key part of his game, made even better when his position on the left of the centre-backs. 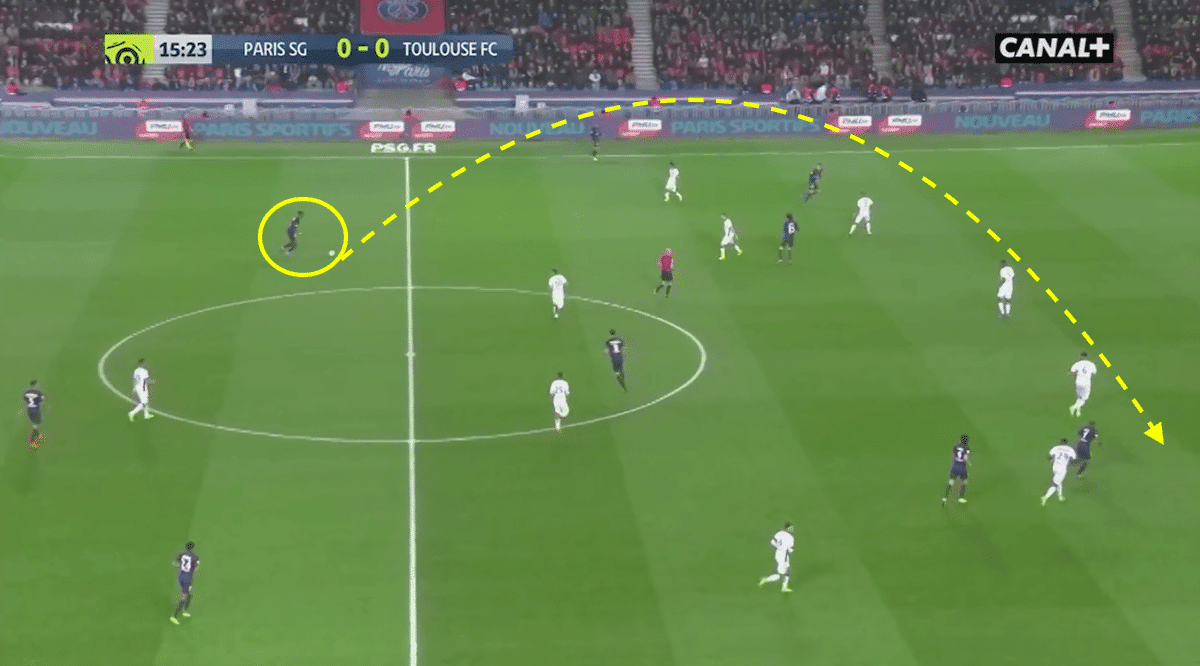 You can see in the league game against Caen, PSG are comfortable in possession and after one touch to get the ball under control and out from under his feet, Kimpembe sweeps a beautiful long ball upfield.

Former Manchester United transfer target Lucas Moura knows what’s coming and uses his speed to get beyond his marker. 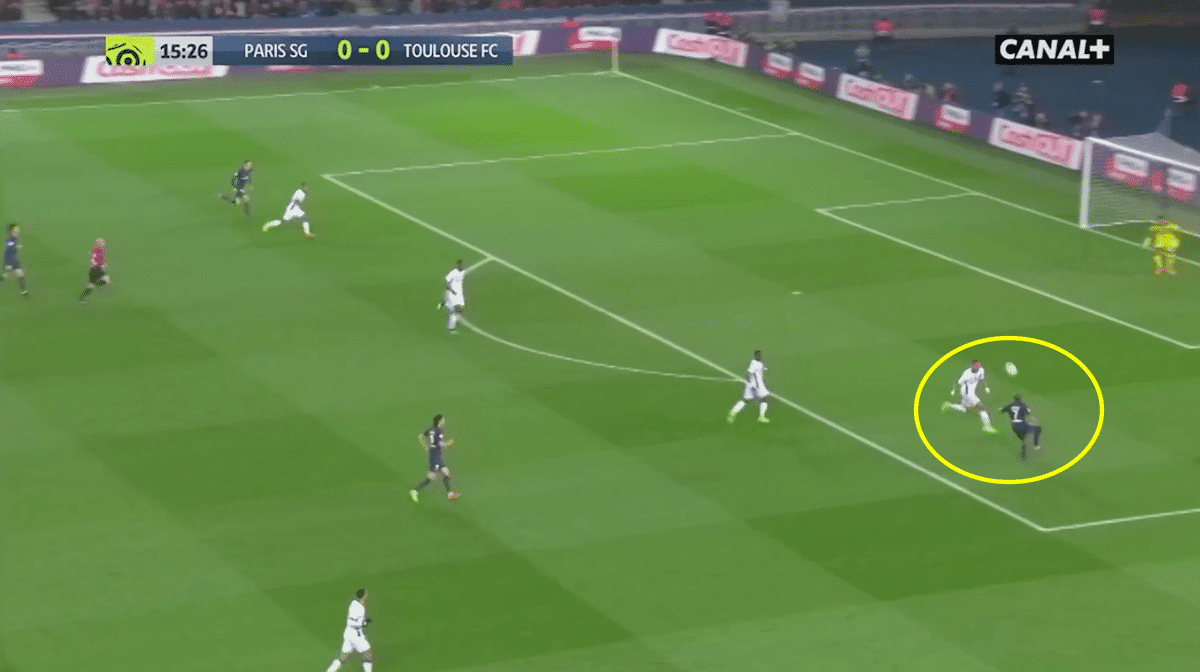 The pass is pin-point perfect and creates a dangerous attack in one vital pass. That could become a great weapon for Koeman and Everton, especially with Yannick Bolasie, Kevin Mirallas, and Ademola Lookman making the runs against more ambitious Premier League defences.

Could he improve Liverpool?

Over at Anfield, Jürgen Klopp has been searching for a new centre-back for a while. Virgil van Dijk is still top of the list, but with Southampton understandably remaining stubborn, the Anfield club may have to look elsewhere.

Already picked out as an alternative to the Dutch defender, it is believed that young Kimpembe in one of the centre-backs on the German coaches list of defenders that tick all his boxes.

Quick along the ground, the 21-year-old has shown great intelligence. He doesn’t jump into anything, as his 0.9 tackles and 81.8 per cent win rate shows. You want your centre-backs to make as few tackles as possible. Anything more than 2.0 per 90 suggests being out of position and having to recover. Kimpembe's numbers are excellent for someone so young. 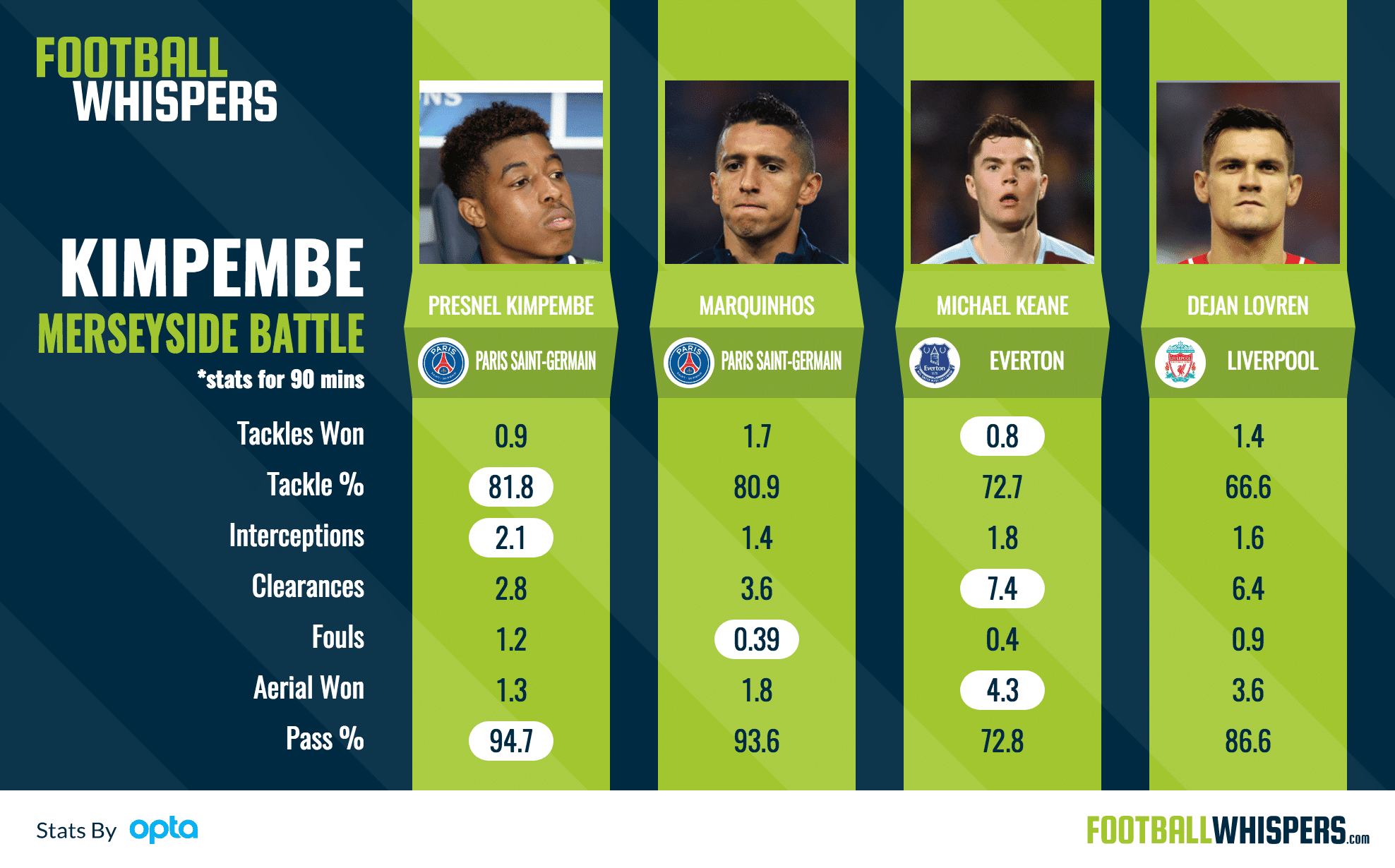 For someone still relatively inexperienced, he reads the game well, making 2.1 interceptions and 2.8 clearances per 90. In comparison, Kimpembe wins more of the tackles he attempts than Dejan Lovren’s 66.6 per cent. The youngster also makes more interceptions and fewer fouls.

What the PSG youngster does very well is combine his attributes to great effect. Rushing back into position, but not jumping in recklessly, he uses his strength to hold his ground and then times the safer tackle or waits for the right moment to intercept the danger.

For someone who is supposed to be the ball-playing member of Liverpool’s defensive duo, the Croatian attempts 70.5 passes per 90, but completes just 86.6 per cent.

Having both Lovren and Joel Matip at the club would help integrate Kimpembe into Premier League life without the need to thrust him straight into the starting line-up. Chances are, just like he has in Paris, given the opportunity, it wouldn’t be long until he would force his way in.

It may not happen this summer but the Beaumont-sur-Oise native won’t wait forever for his playing time in Paris, just like Marquinhos – PSG risked losing the Brazilian due to him playing third-fiddle to Silva and Luiz.

Now Kimpembe is in that role and increasingly looking more confident and consistent than the ageing captain.

Marquinhos and the young Frenchman could be a partnership that takes the Parisian club into the next decade, but at 32 years old, the former Brazil captain has a few years left in the tank.

PSG are on the verge of completing the signing of 19-year-old Argentine centre-back Juan Foyth confirmed Estudiantes president Jean Sebastian Veron on Tuesday.

“We already have an agreement between PSG and Estudiantes for Juan. All that is left is for his representatives to strike a deal. Foyth's sale will be for more than €10m.” he told Radio Continental.

That means Kimpembe will have to battle with another young, talented defender for minutes at the Parc des Princes. He wants to push on with his career and the club seem set on putting more obstacles in his way.

That is only going to frustrate the youth product and push him towards the exit.

Everton and Liverpool would be smart to continue pursuing the centre-back this summer, even if he doesn’t move, you plant a seed for the future. Kimpembe’s is undoubtedly bright, but it could be even brighter if he decided to swap Paris for Merseyside.