When he burst onto the scene in 2013, Gabriel Barbosa was tipped to be the next Neymar.

His emergence coincided with the Prince of Brazilian football’s departure from Santos to Barcelona. There was a void to be filled and the Alvinegro Praiano looked inwards, deciding to take a chance on the 16-year-old.

The teenage wonderkid netted just once in eleven outings during that year but found himself leading the line during 2014. It was then that Europe’s elite began to take note. He scored eight in the Brazilian Série A but netted 21 in all competitions. He repeated the feat the following season, notching ten in the league but 21 in total.

Midway through the 2016 campaign, Barbosa found himself with 13 goals in 30 appearances. It was set to be his most prolific to date before Inter signed off on a €30million deal to bag themselves what they deemed to be the future of the Seleção.

However, unlike his compatriot who seemed to settle in the Barcelona team with relative ease, Gabigol, a nickname he was given because of his goalscoring exploits as a youngster, found it tough at San Siro.

He made just ten appearances during the 2016/17 campaign and found the back of the net on just one occasion. With Inter not being in a position to act as a finishing school for youngsters, the Italians loaned him to Portuguese outfit Benfica.

Famed for developing South American starlets, it seemed like a perfect fit on paper. But Gabigol made just five appearances before the loan was cut short. In January of 2018, the forward returned to Santos on loan.

Though still only 21 at the time, it felt like the one-time future of Brazilian football was destined to fall into wonderkid purgatory alongside the likes of Kerlon and Kerrison.

But now back in his homeland, Barbosa has responded to his critics and detractors with goals. Plenty of them.

For Santos, he scored a career-high 18 league goals and 27 in total during 2018. He then made the loan switch to Flamengo and is once again enjoying himself. He’s scored 18 in 18 league appearances and has 32 for the season already. 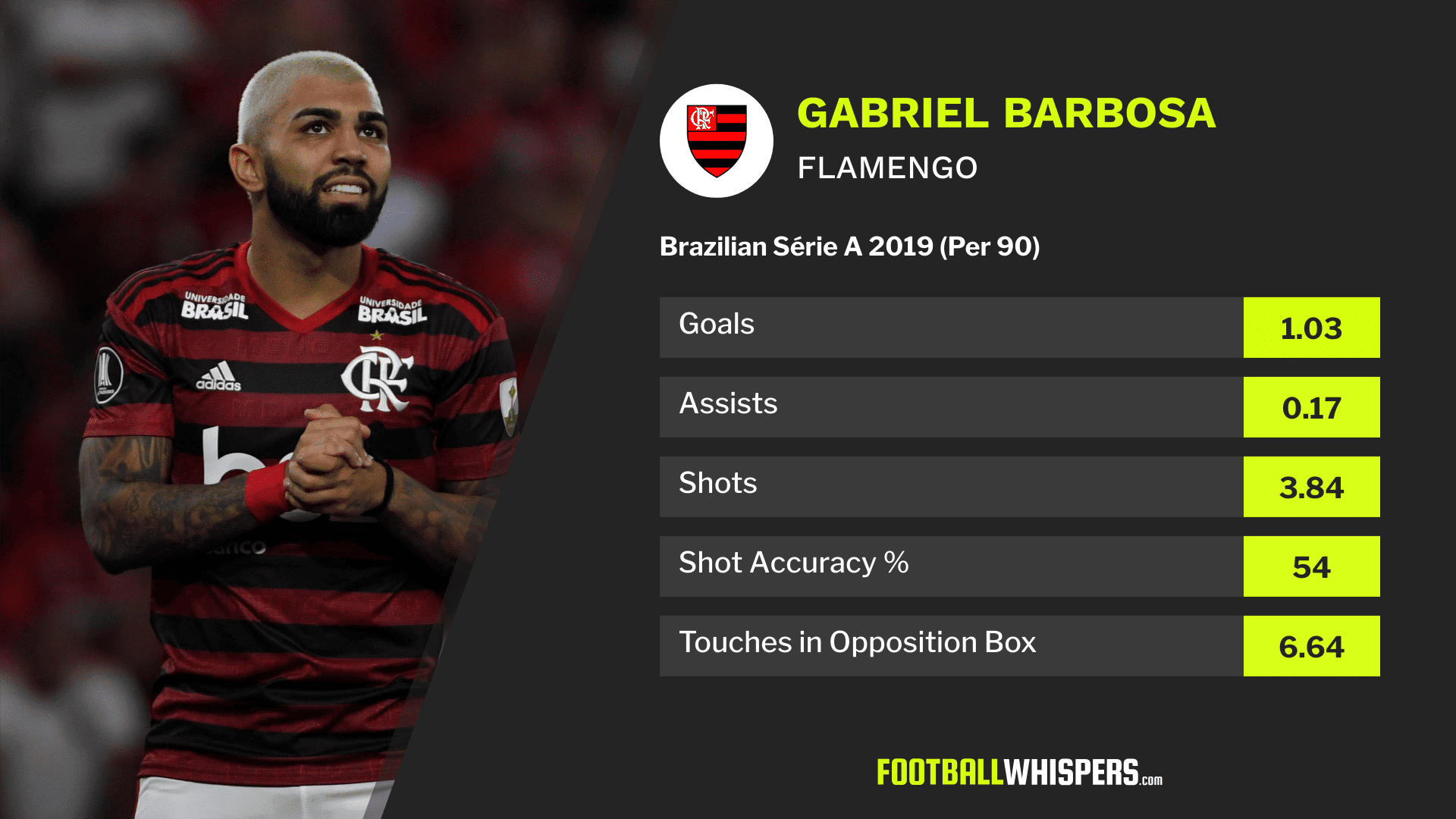 His form hasn’t gone unnoticed. Inter are reportedly weighing up whether to bring him back to Serie A, he’s back in the national team after a three-year absence and he’s being linked with big-money moves to the Premier League.

Reports in Italy claim Crystal Palace are once again looking at the 23-year-old, and that the Eagles have already held talks with his agent, Kia Joorabchian. It isn’t the first time the English top-flight club have been linked with him. The interest is long-standing. They may, however, act on it this time with Roy Hodgson’s men in a good position to really push for a top-eight place this season.

Currently in sixth position, Palace are only two points behind Manchester City after claiming four wins and two draws in their first eight games of the new season. Despite a positive start, the Eagles are in dire need of a goalscorer having only found the back of the net on eight occasions.

While £30million, the rumoured price-tag on Gabigol’s head, seems steep for a player who has previously failed to set Europe alight, this time could be different.

When he initially made the move to Inter, he was hyped as the next Neymar without much to back up those claims other than also being a Santos academy graduate.

For example, Gabigol had two full seasons under his belt, Neymar had four.

Gabigol’s return of 42 goals in those two seasons was equalled by Neymar in 2012 when he scored 43. The left-footed striker was by no means bad, he was just being unfairly compared to who many deem to be a generational talent. Expectations were skewed and this hurt his chances of really making an impact.

Furthermore, he was young. Still a teenager, he was having to adapt to a new league, a new language and a new style. Then there was more upheaval when he made the move to Benfica. It wasn’t the best environment for him to flourish.

His goal against Santos was sublime. His celebration might’ve been even better. Everyone lost their head celebrating – fans and players alike, while Gabigol just soaked it all up. A sure sign that he's back to his very confident best.

He's scoring a variety of goals in Brazil. From outrageous lobs to stooping headers, he seems to have it all in his locker. Whether he has the ability to transfer everything to a European league is another question entirely but provide him with the right ammunition and you have a genuine goalscorer on your hands.

He's a more mature player with a backlog of goals and performances to justify the hype. That's the biggest difference from his first exploration into Europe. Premier League clubs are in a position to gamble on a £30million-rated player. If he settles then he'd be worth treble that in no time.

Gabigol is finally fulfilling his potential. Top European clubs will find it hard to ignore him for much longer.