The Red Bull Salzburg midfielder was the subject of interest from Arsenal in the summer as they searched for a replacement for Aaron Ramsey. The 18-year-old was also rumoured to be a Tottenham Hotspur and Manchester United target. Now, according to reports in Italy, Liverpool are keeping tabs on him.

The Reds will have had a good look at Szoboszlai during their Champions League clash with the Austrians at Anfield. The teenager failed to score on the night, missing a good chance in the second half, but did chip in with an assist and played a vital role in Erling Håland's equaliser.

Those watching on would’ve been impressed with Szoboszlai's performance. Very few opposition players standout against Liverpool these days yet he was dispossessing Firmino and carving out space in the penalty against a usually dominant defence.

The No.14’s brilliance often gets lost, however. Easily done in a squad stacked with goals, the attention has been focused on Håland, while Takumi Minamino and Hwang Hee-chan stole the show at Anfield.

But Szoboszlai looks set to be the next Salzburg academy graduate to be exported for big money. The Austrian club helped develop Sadio Mané, Naby Keïta, Amadou Haidara, Dayot Upamecano and Marcel Sabitzer, but Szoboszlai could potentially be the best of the bunch.

That would be quite the achievement, but when you really break it down, it's clear Szoboszlai has everything required to be one of the best in the world in his role.

Whatever he decides his role is going to be, of course. Szoboszlai's unique playing profile leaves a number of different doors ajar. 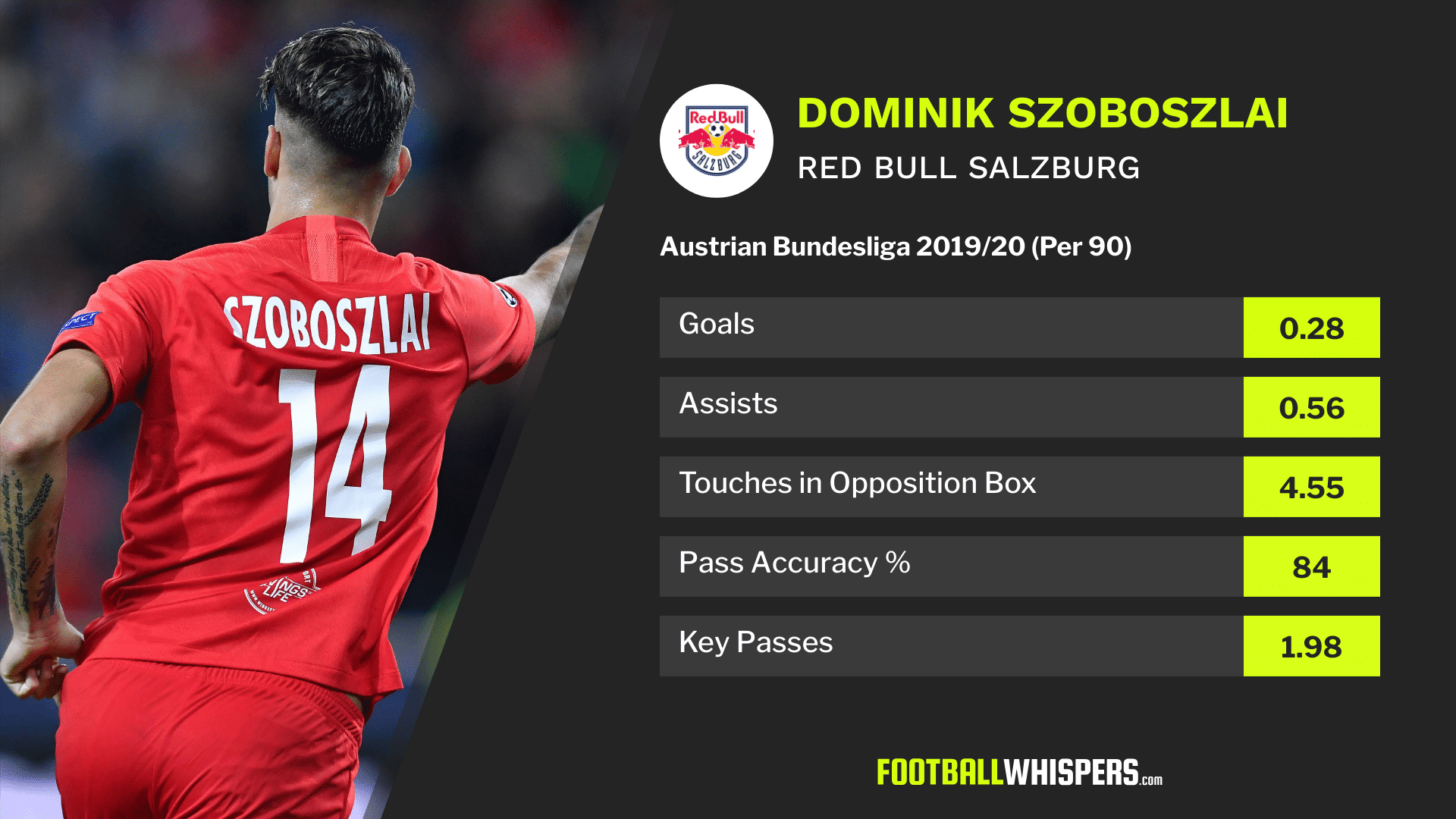 Right now he's being used from a wide role but he's by no means playing like a traditional winger. Primarily deployed on the left, he likes to cut inside but instead of occupying a No.10 role he seems more than happy to play in areas usually associated with box-to-box midfielders.

Szoboszlai's first thought isn't to get into the penalty area but is instead to linger on the edge of the box. He's usually the one knitting the play together with an odd touch, a delicate flick or an incisive pass between the lines.

He's very much a creative force and something of an outlier in a modern-game filled with players wanting to be the ones to finish off moves.

If Szoboszlai was being judged purely on stats then the Hungary international would look like the odd one out in this rampant Red Bull side. He has just one league goal to his name, significantly fewer than Haaland (11), Hwang (four), Minamino (three) and Patson Daka (six). But Szoboszlai is more of a facilitator.

He's averaging 0.56 assists and he's playing close to two key passes per 90. He's also a dead-ball expert with a history of goals from free-kicks and assists from set-pieces.

His upright running style is also different from most. He likes to carry the ball but instead of slaloming his way past people with a low centre of gravity, he powers past them.

It's strange to see from someone playing in the middle third and it makes him stand out. If he was to be compared to anybody, it would be Kevin De Bruyne pre-Pep Guardiola.

Szoboszlai can do a bit of everything between boxes, he's a goal threat but tends to lean on his creativity. De Bruyne was a whirlwind of a player before Guardiola refined aspects of his game and concentrated his efforts a little more.

The Red Bull Salzburg youngster could go through a similar metamorphosis once he gets that move to a European heavyweight. But he'll need to move to a club with a coach who has a track record of developing talent.

The worst thing that could happen is to sign with a team that doesn't have a clear idea of how to use him. He would end up filling several roles and never finding a home for himself in a starting XI.

It's happened to starlets in the past and it'll happen to many more. Szoboszlai can't be one of them.