Crystal Palace and Brighton and Hove Albion have a long-standing rivalry which dates back to the 1970s, and now they're in the Premier League perhaps they'll be battling each other for the same calibre of player in certain positions.

Of course, Palace have been the in top flight for the last five years and have bigger financial muscle, but Brighton will expect to be on par with them sooner rather than later.

It seems as though both clubs are in the market for a new right-back, however, and have been linked with a move for Sunderland's Paddy McNair.

The Northern Ireland international, who came through the ranks at Manchester United, is believed to be a transfer target for Palace and the Seagulls this summer.

McNair has also been the subject of Wolverhampton Wanderers transfer rumours, with Sunderland expecting a bidding war from Premier League clubs.

The 23-year-old actually began his career as a holding midfielder, but was converted into a right-back at Old Trafford, although he is comfortable at playing in the middle of the park if asked.

But Palace and Brighton view McNair as a full-back able to compete with their existing talent.

At Selhurst Park, Joel Ward is out of contract and looks set to move on, leaving youngster Aaron Wan-Bissaka, while Bruno may have played 26 times for Brighton last season but he's not getting any younger and they are perhaps looking at a long-term replacement.

In what was a disastrous season for Sunderland, McNair was one positive with his displays during his 16 Championship appearances, following 11 months out with an ACL rupture. For a player with a defensive mind, he managed to score five times, too, with four of them coming in his last five games.

His chance creation was impressive. He produced 0.75 open play key passes per 90 minutes which ranked him in the top 20 compared to other Championship players in a similar position. Up against the likes of Wan-Bissaka, Ward, Ezequiel Schelotto and Bruno, none made more on a per 90 minute basis. 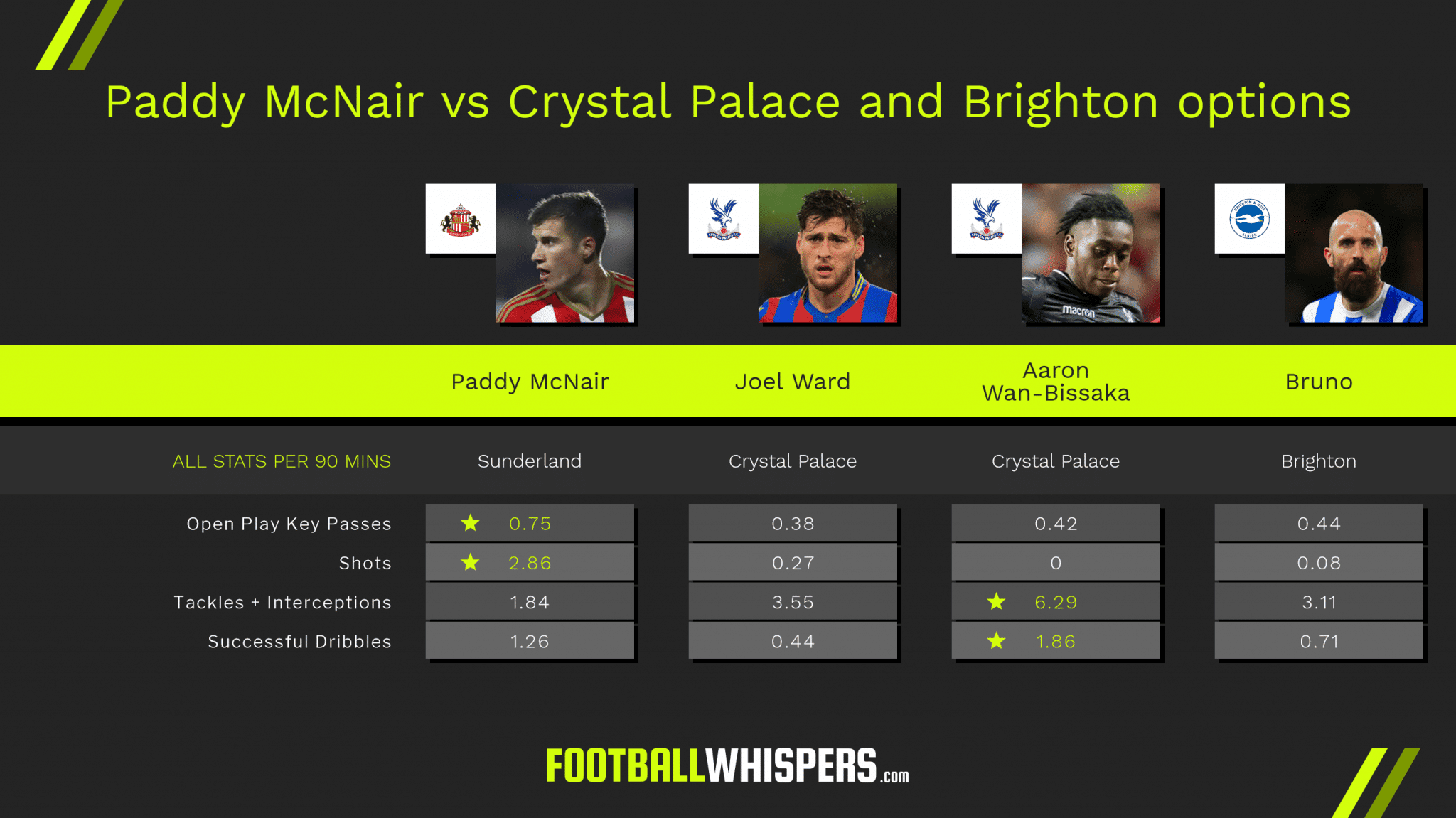 McNair also took 2.86 shots per 90, probably a function of playing a more advanced role for Sunderland last season. Even so, it suggests that he can be a threat going forward if a potential future club needs it, especially considering that 41 per cent of these efforts were on target.

His role for Sunderland last season saw him making far fewer defensive actions than the current Palace and Brighton options. It's not to say McNair can't cope with a higher defensive load, but it will be a change from what he has been used to in 2017/18.

Still only 23, he has a lot to learn but plenty of time to learn it. Due to circumstances, he may fancy his chances of doing it at Palace rather than Brighton.

Ward looks likely to leave, so they need someone else capable of playing on the right-side defence. It would make for an interesting match-up against Wan-Bissaka, who impressed immensely in the second half of last season.

Meanwhile in Brighton, Bruno is still producing the goods at 37-years-old and has another year on his current deal, while Schelotto has another two.

Palace and Brighton are good clubs for someone like McNair to get himself back into a top flight environment. But on the face of it, he would have more opportunities at Selhurst Park playing on the right side of defence.

And Palace would love to get one over their arch-rivals by signing him, too.