Chelsea have several issues to solve during the summer transfer window. Will Diego Costa leave? How well will Álvaro Morata fit in? And what should the club do with Michy Batshuayi?

The Belgian has been linked with West Ham United in the past. Indeed, the Hammers wanted his signature last summer before the Blues beat them to it, signing the striker from Marseille for £33million.

But, despite his end-of-season flourish, which included scoring the title-winning goal at West Brom, Batshuayi was a bit-part player for much of last season.

Money is no object to Roman Abramovich, something that has been proven once again this summer in the signings of Antonio Rüdiger, Tiemoué Bakayoko and Morata.

But, in recent years, Chelsea have generally eschewed a carefree attitude to spending and tried to live within their means.

The sale of Oscar to Shanghai SIPG for £60million in January is evidence of that and the Stamford Bridge side have carved out a reputation for doing good business in recent years.

If Chelsea want to continue to do so then hanging onto Batshuayi this summer, instead of forking out yet more money for a backup striker, would be in their interest. Not least because the forward is a talented player in his own right, something evidenced in recent friendlies.

Scoring once against Fulham and twice against Arsenal in pre-season fixtures, the hitman has shown the full extent of his movement and finishing as he looks to make a case for his place at the club.

In recent years Chelsea have had a revolving door policy when it comes to backup forwards. Unable to dislodge Costa or, before him, Didier Drogba, they have signed a new forward most summers and usually at great expense.

Costa's future looks to lie away from Stamford Bridge, with Conte texting the Spaniard to say as much last month, but Morata has been brought in as a replacement.

That will mean another season of stealing minutes in the Premier League and hoping for run-outs in the cups for whoever is understudy to the Blues' new main forward.

It is that lack of action which has seen Batshuayi, 23, grow frustrated. Even after scoring twice against Sunderland on the final day, with the title celebrations well underway, the Belgian posted a somewhat cryptic message on Twitter.

You can't blame Batshuayi for being slightly aggrieved. He made just one Premier League start for the Blues last season and that only came once the title had been won.

It is understandable that he is frustrated and he is not the first. Romelu Lukaku was afforded just one Premier League start and nine substitute outings for the west Londoners before José Mourinho unceremoniously offloaded him – a decision which, in the fullness of time, has backfired.

Daniel Sturridge is another who, to some extent, has proven Chelsea wrong after they let him go. Twelve Premier League goals in 28 starts while playing predominantly on the right of the three behind the main striker gave a glimpse of what he could do. But he was sold after André Villas-Boas was sacked and had, until recently, been one of the most feared strikers in the top flight. 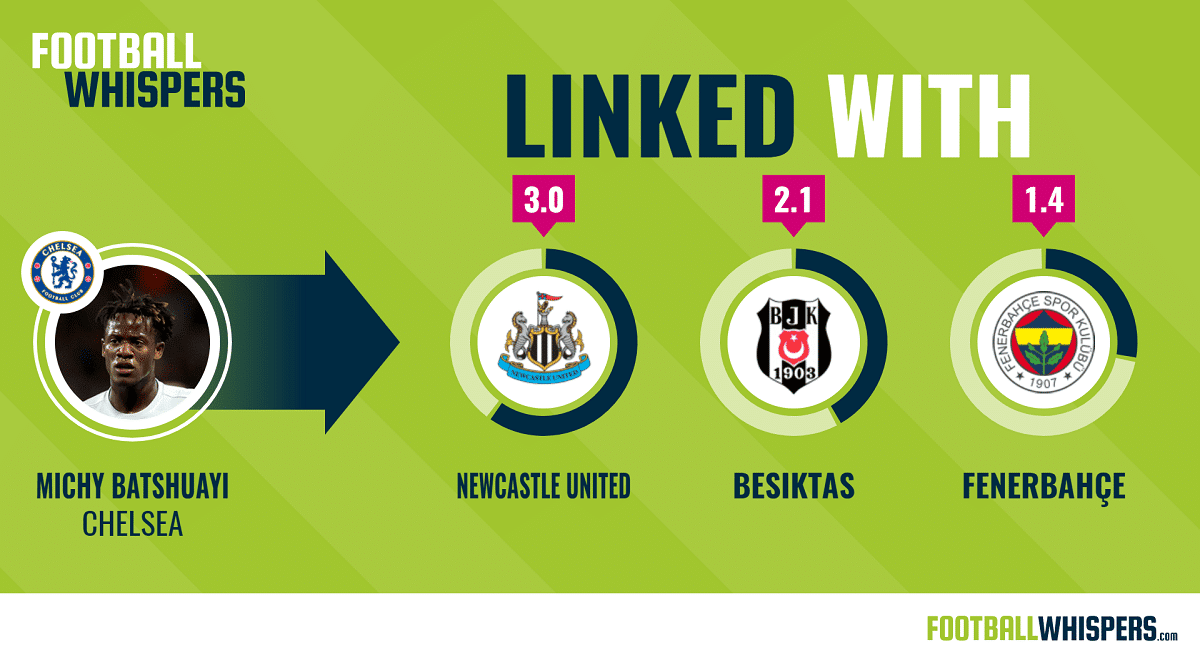 Why Chelsea should keep Batshuayi

If Batshuayi were to leave, Chelsea would need to find an alternative to their main striker.

Tammy Abraham has left for Swansea City on a season-long loan while Bertrand Traore has joined Lyon on a permanent basis and Dominic Solanke has joined Liverpool, leaving Batshuayi, Costa and Morata as the club's current striking options.

Allowing the Belgian to go would also mean going back into the transfer market and splashing another £20million-plus on yet another striker who will play second-fiddle to Morata.

In Batshuayi, the Blues already have a talented and perfectly able alternative. But, in truth, his hopes last season rested on something going wrong with Costa as much as they did his own ability to break into Conte's starting XI on a regular basis.

The former Atlético Madrid man is combustible by nature and has had trouble with his hamstrings in the past but was still available for selection week in week out.

Simply put, there have not been many opportunities for Batshuayi to show his worth. But replacing him like-for-like with another talented young player is not the solution.

What Batshuayi brings to Chelsea

Batshuayi's final season at Marseille underlined the calibre of player Chelsea were signing.

Likened to a man who was incredibly popular at both clubs, Didier Drogba, the youngster combined pace, power and clever movement to finish as OM's top scorer ahead of his departure from the Stade Vélodrome.

Despite his age the former Standard Liege prospect finished as the French giants' top scorer – netting 12 more than current Tottenham Hotspur forward Georges-Kévin N'Koudou – and he was also the most prolific player at Standard before moving to France in 2014.

In a crowded striking department for Belgium, which includes Lukaku, Liverpool's Divock Origi and Crystal Palace targetman Christian Benteke, Batshuayi has eased his way into international football with three goals in nine games and is very much part of Roberto Martínez's plans.

What is particularly impressive about the statistics from his final season at Marseille is the number of assists Batshuayi recorded, and it suggests there is more to the player than simply being a goal scorer.

In the still below, against Rennes, he closes down the defender and wins possession before rolling it back to Florin Thauvin to curl home. 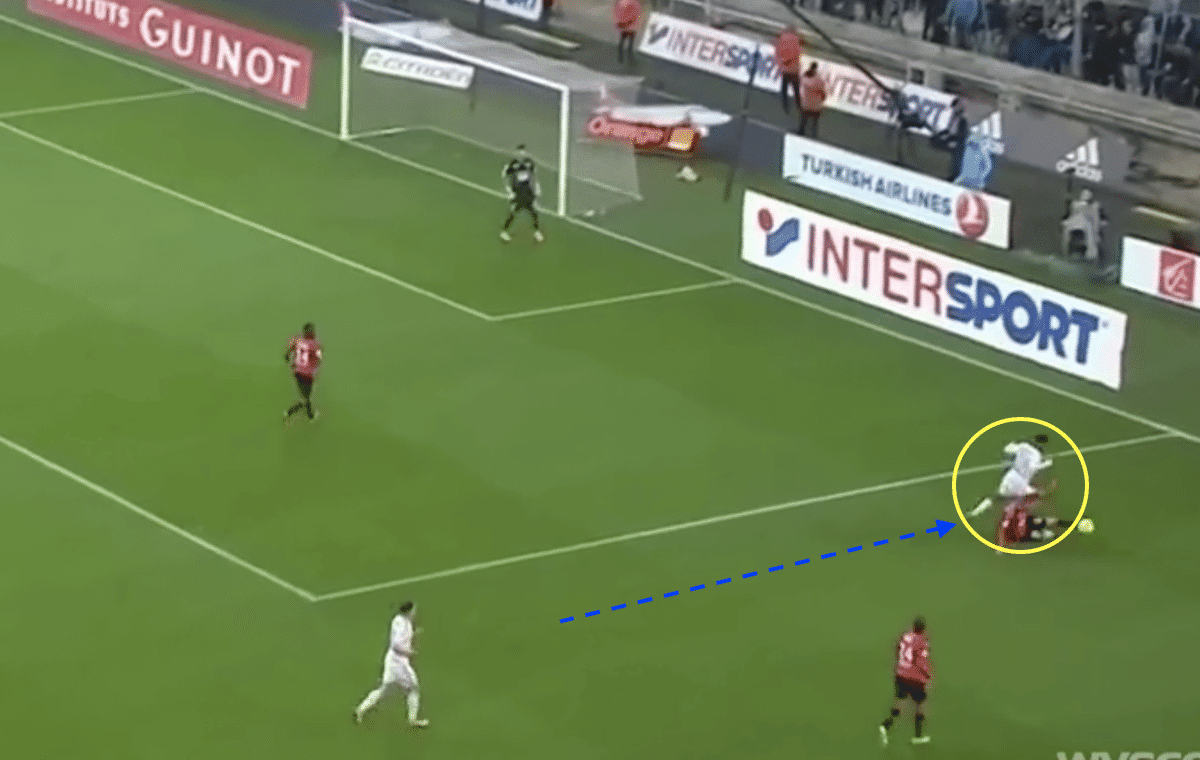 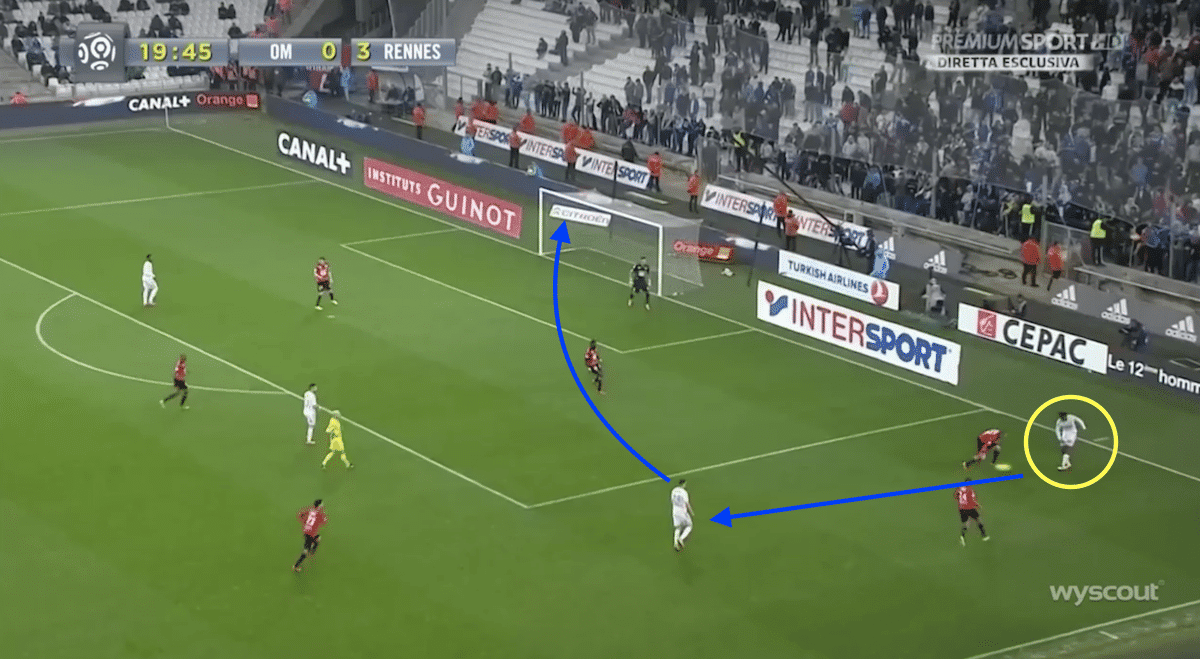 Batshuayi's first Premier League goal was an example of the forward's work-rate. Again, he won the ball back from Watford's throw to start the move. 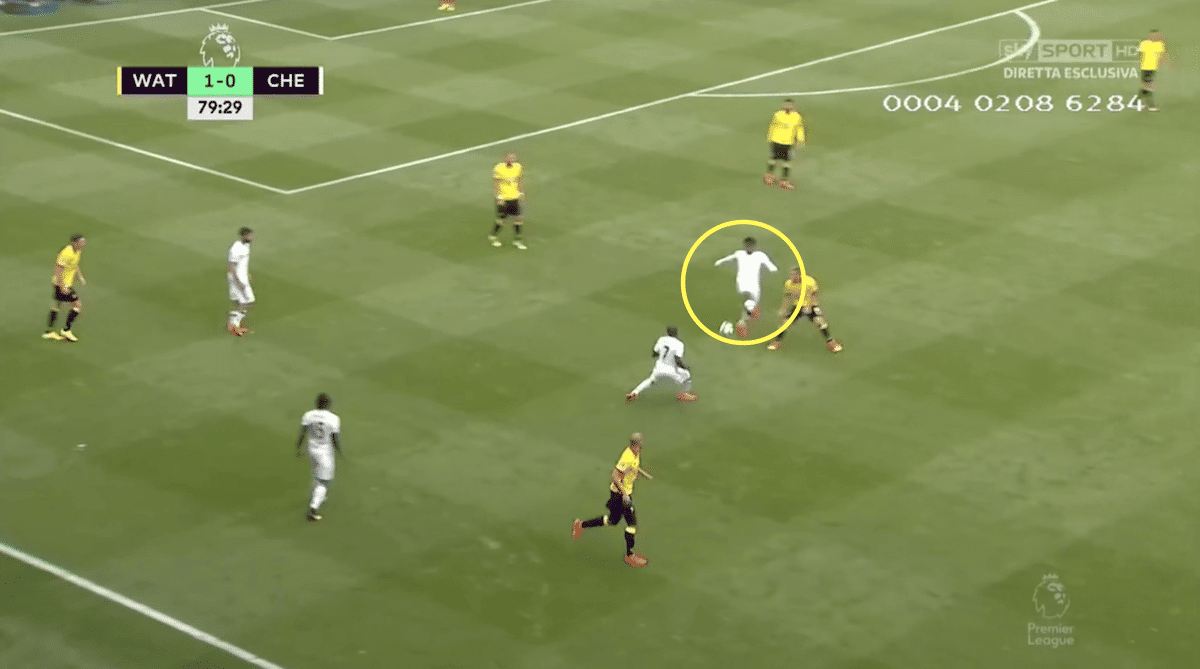 Rather than stand back and admire his work, Batshuayi advanced to the edge of the penalty area. 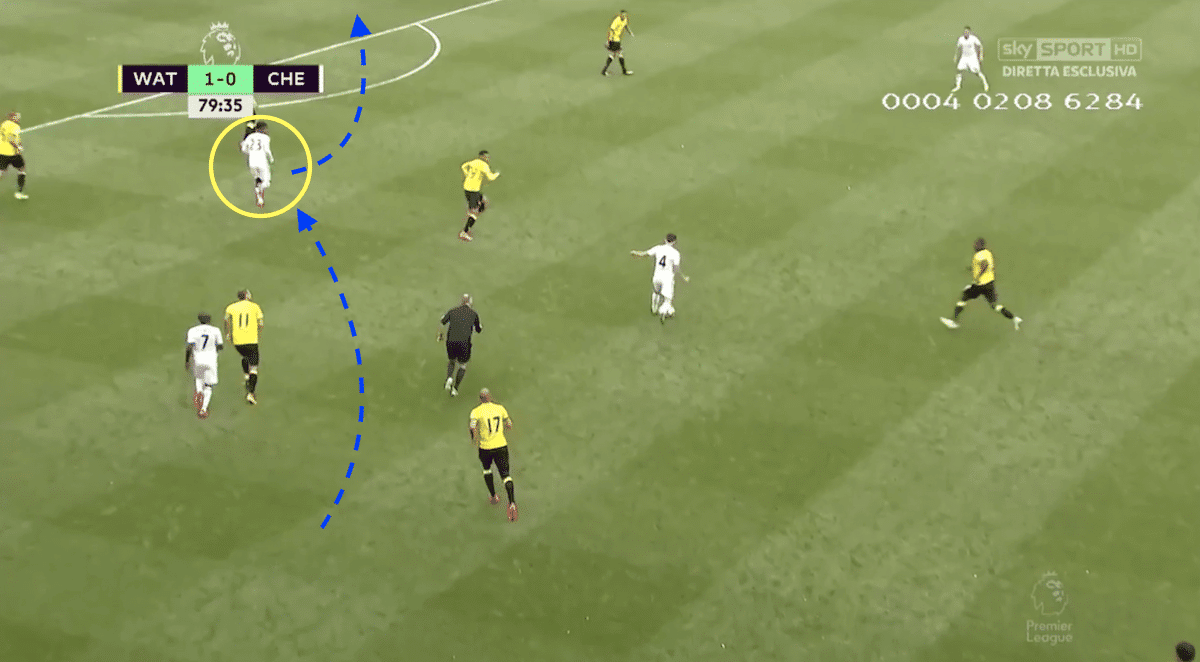 The ball was worked across to Eden Hazard and, when Heurelho Gomes spilled the Belgian's shot, it was Batshuayi who was on hand to equalise with ten minutes remaining. 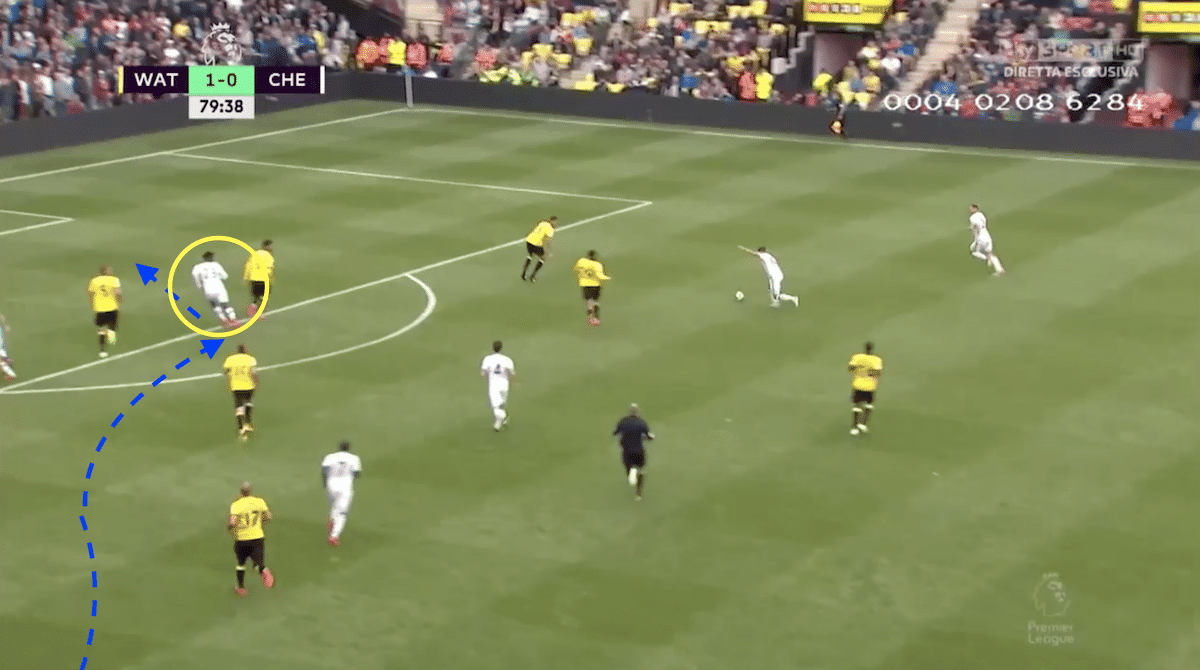 That goal should have been the springboard for Batshuayi's Chelsea career but it was not the case. He had to wait until May for that moment, coming off the bench to score the goal that clinched the title at The Hawthorns.

He followed that up with another strike against Watford and a brace against already relegated Sunderland on the final day.

Batshuayi has proven he can score goals in the Premier League and it would make sense for the Blues to hang onto a player who has no little quality and could save them money.

They have, after all, been stung by letting a young Belgian forward leave before. But the Blues are not known for their patience.