It doesn't get any easier for Brendan Rodgers and Celtic in the Champions League. After negotiating difficult ties against Paris Saint-Germain and Anderlecht, the Scottish champions travel to Germany to face a resurgent Bayern Munich on Wednesday night at the Allianz Arena.

Bayern, of course, have a renewed sense of purpose following the return of Jupp Heynckes as manager, the 72-year-old agreeing to lead the team on a short-term basis while the club searches for Carlo Ancelotti's permanent successor.

For Celtic, a trip to Bavaria represents another potentially bruising assessment of their Champions League credentials. With players such as Robert Lewandowski, Arjen Robben, Kingsley Coman and Thiago Alcántara in attacking roles, there is no getting around the fact that the Celtic defence faces an unenviable task.

However, Rodgers and his coaching staff will have watched Bayern in recent weeks and drawn up a specific gameplan. While their findings surely concluded that the Bundesliga champions are a devastating attacking force (although that wouldn't have required much research), they will have identified a possible chink in their armour: the full-back positions.

That is not to suggest that Bayern's full-backs are weak. Quite the opposite, in fact. In David Alaba and Joshua Kimmich, they have two hugely talented footballers. However, if Celtic are to hurt Bayern in any way, shape or form it is going to come from wide positions.

During Bayern's humbling 3-0 defeat to PSG – which proved to be the final nail in Ancelotti's coffin – the French side exploited their opponent's fragilities at full-back.

For the second goal, Alaba got drawn to the ball during a period of PSG possession. Failing to get close to Adrien Rabiot, Alaba left Dani Alves on the wing, who played a decisive pass in behind the Bayern defence to Kylian Mbappé, who set up Edinson Cavani for the goal.

Similarly, for the third goal, Alaba allowed Mbappé too much space on the right before being undone by a brilliant drag-back from the Frenchman, who set up Neymar to clinch PSG's third of the night. None of the Bayern players exactly covered themselves in glory on the Parc des Princes pitch that night, but it was particularly eye-opening to see how short of confidence Alaba was.

Alaba, a ball-playing attacking right-back, is likely to push high up the pitch against Celtic, especially as Bayern will enjoy the majority of possession, meaning there will be space down the right flank if Celtic can win the ball.

On the opposite wing is Kimmich. The 22-year-old has developed into one of the finest attacking right-backs in the world – drawing comparisons to Philipp Lahm no less – but was a midfielder to begin with. His transition to full-back has been impressive but he has shown lapses in defensive discipline at times which have been telling.

Against Hoffenheim, Kimmich was culpable for Bayern conceding a second. Initially heading a long ball clear, Kimmich allows himself to be dragged out of position in an impulsive attempt to win the ball. Not coming close, he left Steven Zuber completely free to pick out Mark Uth for the goal. 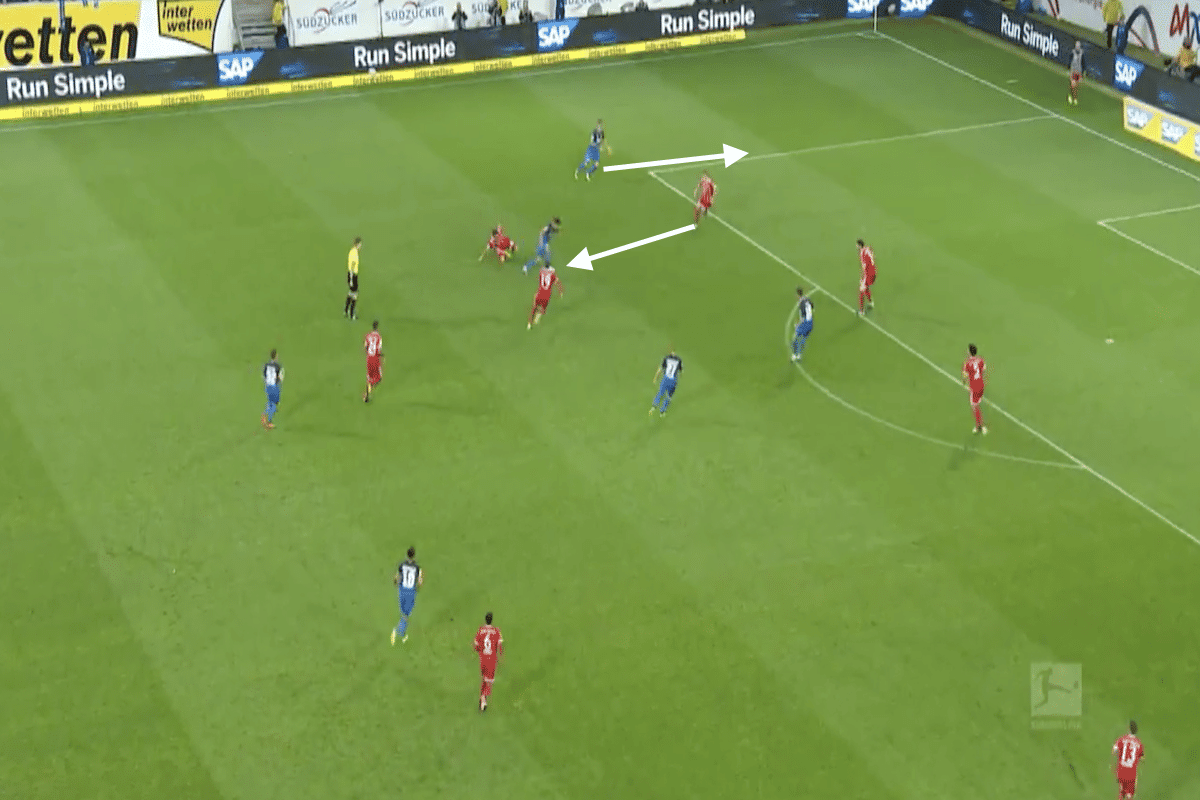 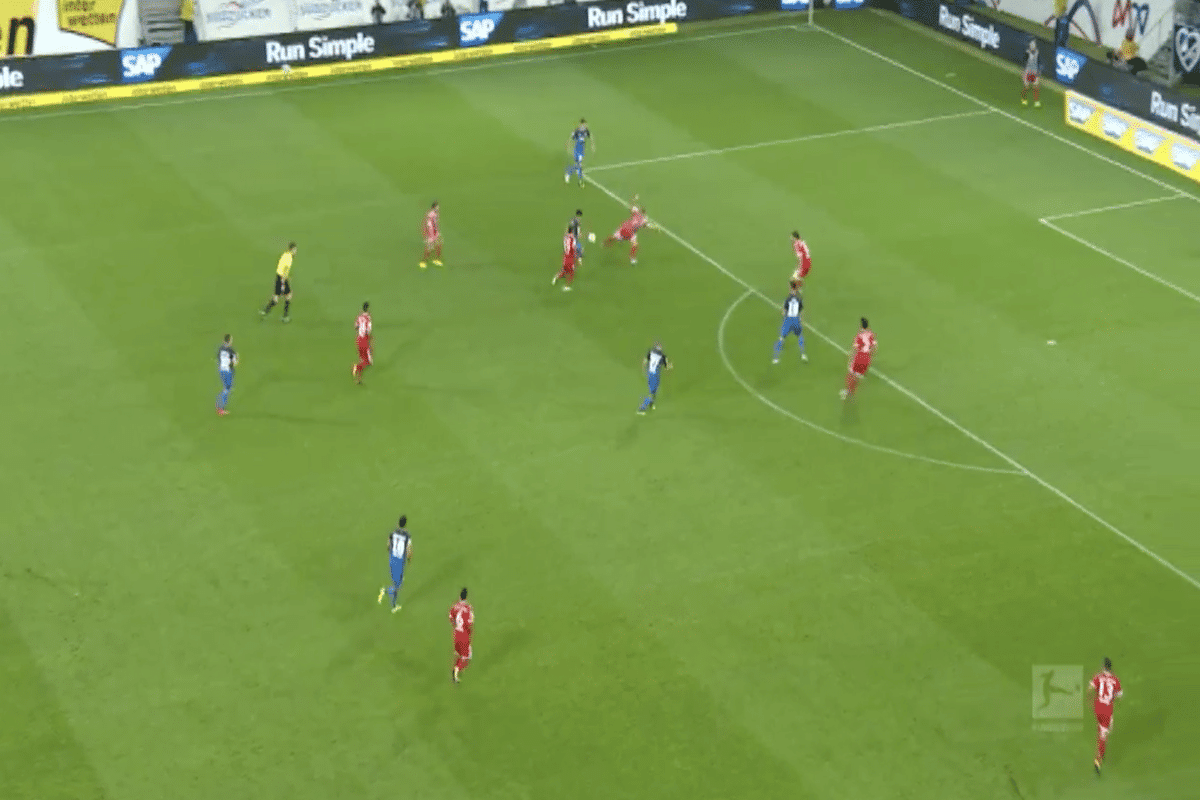 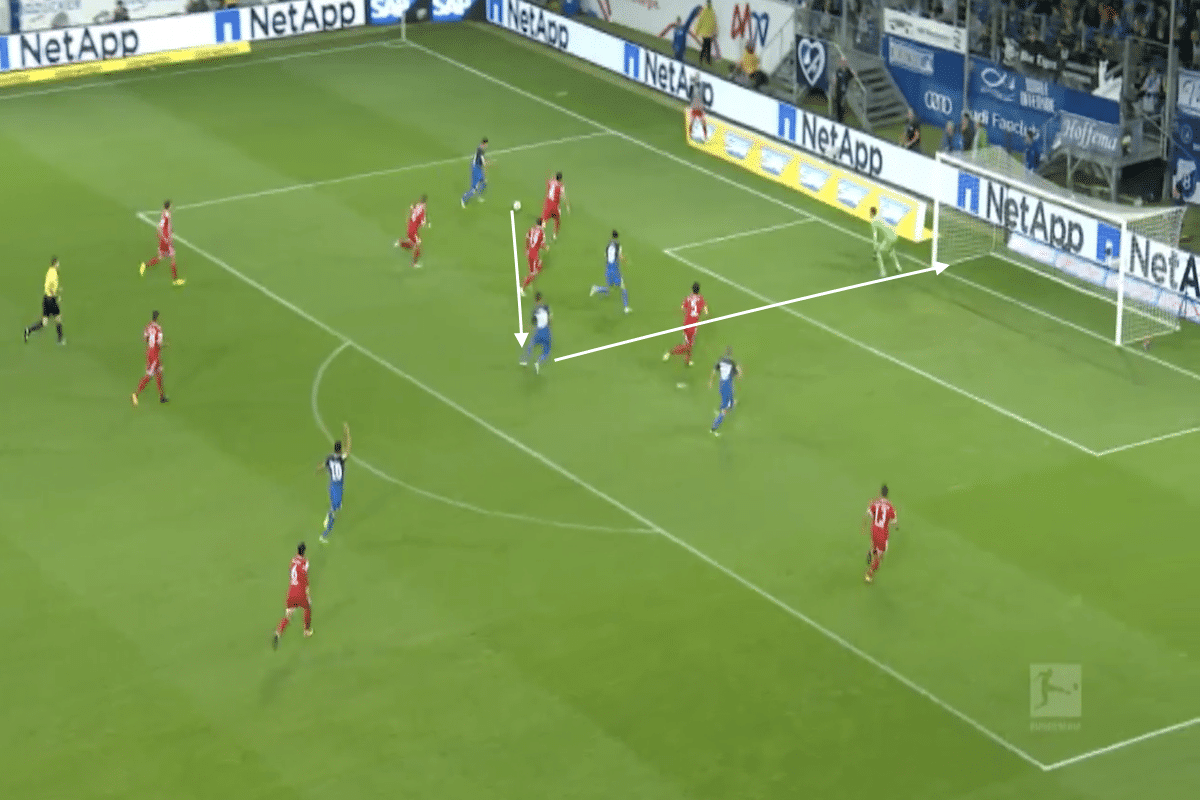 Kimmich is a scintillating attacking outlet on the right wing and has already notched four assists this season, but Scott Sinclair, who is expected to line-up on the left wing like he did in the win over Anderlecht, will be hopeful of getting one or two chances to slip in behind and hurt the Bayern defence.

Of course, Celtic cannot afford to simply hope for Kimmich or Alaba to switch off. There must be a legitimate attempt, on Celtic's part, to unnerve them. Good wide players have the ability to drag defenders out of position and that is exactly what Rodgers will be hoping his winger can do to Bayern.

Luckily, Rodgers has four excellent players at his disposal in Sinclair, Patrick Roberts, Kieran Tierney and Mikael Lustig. If Rodgers deploys the same 4-2-3-1 that saw off Anderlecht last time out, much of the attacking responsibility will fall to Sinclair on the left and Roberts on the right, with Tierney and Lustig offering support whenever possible.

Against Anderlecht, all three of Celtic's goal came via quality play on the wings. The first, as you can see below, was the product of a penetrating run by Tierney, not afraid of going beyond the Anderlecht back-line to create the opportunity for Leigh Griffiths. Although Celtic cannot expect Bayern to be nearly as wide open as their Belgian opponents, it's exactly this kind of brave and bold running that will give the Scottish champions a chance. 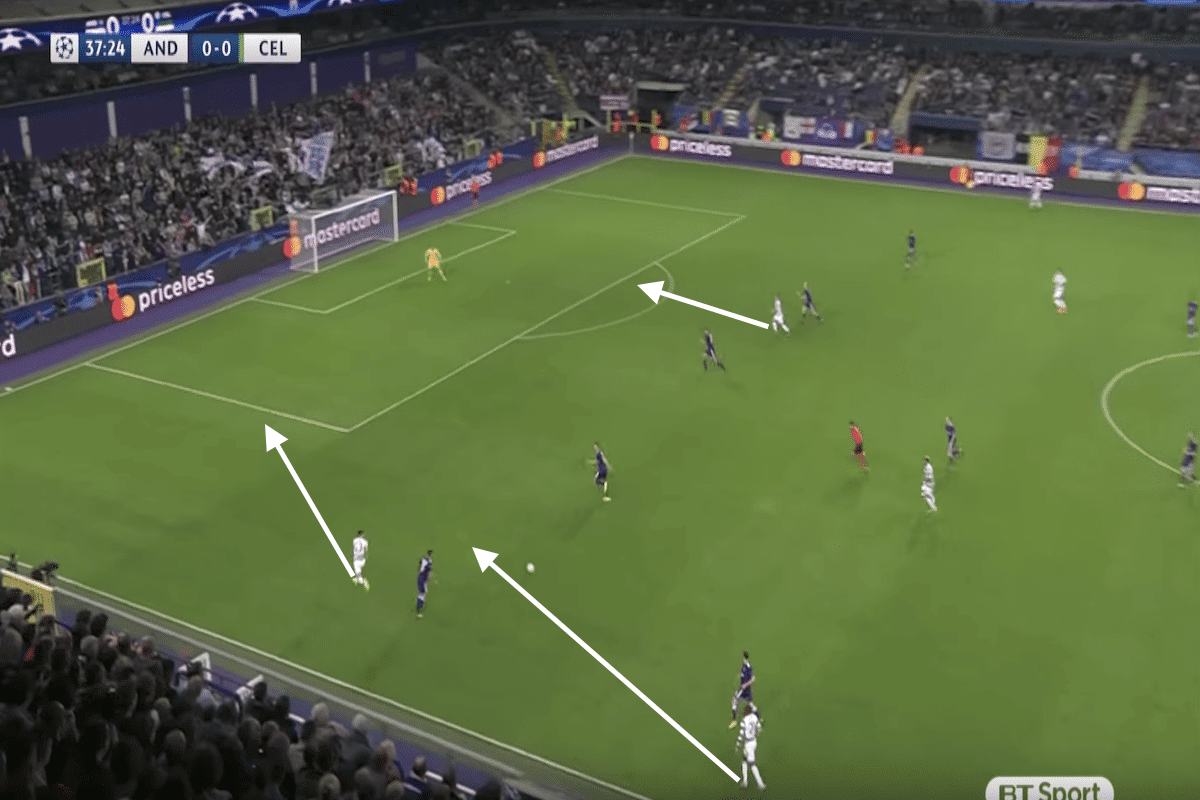 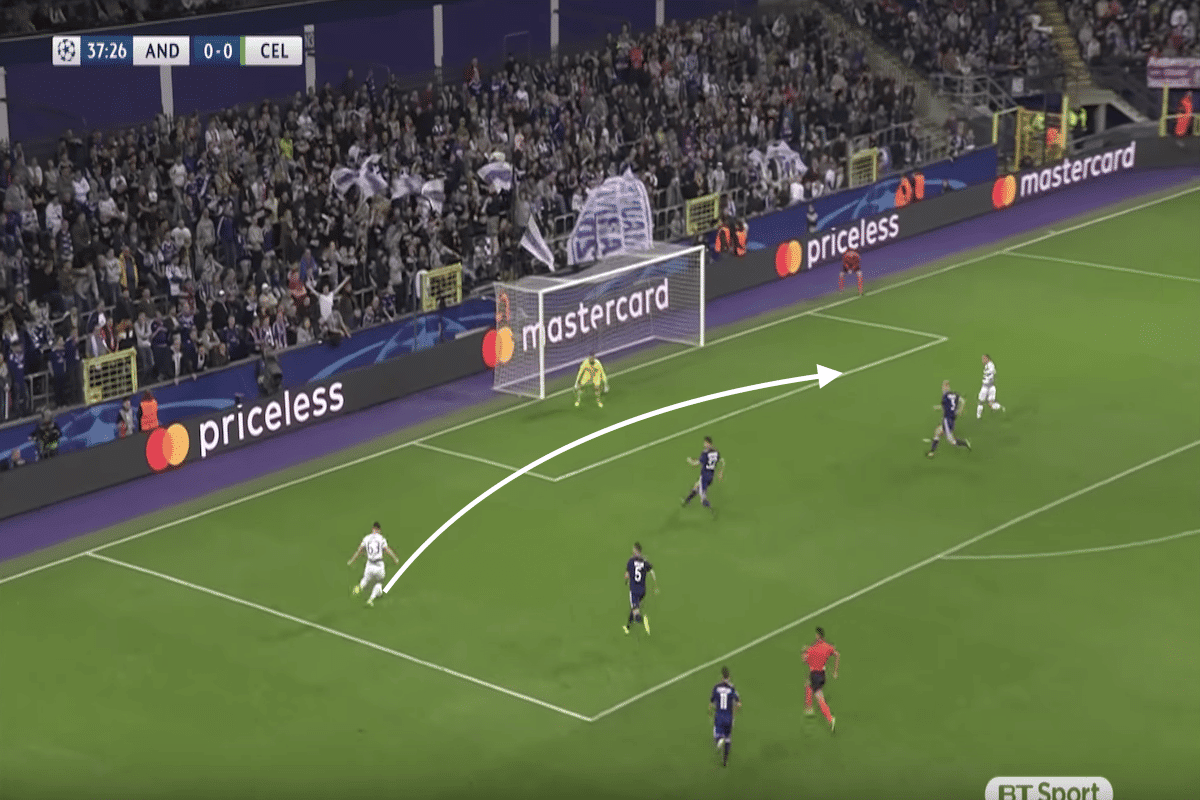 Much of Celtic's quest for inspiration in Bavaria will fall to Roberts, though. The on-loan Manchester City ace has been in dazzling form this season and will be key to unlocking the Bayern defence.

Celtic fans will certainly be hoping that Roberts starts on Wednesday night despite playing a full 90 minutes in Saturday's win over Dundee. Granted, while the Dundee defence isn't quite as stout as Bayern's, Roberts was practically unplayable, producing wonderful pieces of skill to delight the Celtic Park crowd.

With confidence pumping through his veins, Roberts would relish the chance of impressing against Bayern. Although his night against PSG was one to forget, the 20-year-old caught the eye against Anderlecht and will be determined to continue his education by testing himself against another European heavyweight.

Ultimately, going to the Allianz Arena is one of the toughest tests Celtic could possibly ask for, especially with Heynckes making an immediate impression on his return to the dugout. Celtic will know exactly what to expect: little of the ball, a lot of defending. The pattern of the game is likely to follow Celtic's defeat to PSG, during which the Hoops managed only 31 per cent possession.

However, while Bayern are a world-class team dripping with attacking ideas and invention, they have shown a degree of vulnerability at the back this season, having conceded seven goals in the Bundesliga. If Celtic can raise their game and move the ball with speed, accuracy and purpose, they stand a slim chance of opening up the German side's defence.

Celtic have the beneficial habit of lifting themselves for big Champions League nights. Last season, they managed two draws with Manchester City while they showed a cutting edge against Anderlecht three weeks ago. If they can show a similar level of application and appetite against the five-time European champions, they may be able to come away with a point – or maybe more. Stranger things have happened.