Joshua Kimmich has every right to be disgruntled about his play time less than a year into Carlo Ancelotti’s Bayern Munich reign. But Die Roten should hold onto the utility man in face of interest from Manchester City.

Speaking after Saturday’s 3-0 Bundesliga win over Eintracht Frankfurt the 22-year-old lifted the lid on his frustration at being used sparingly by Ancelotti this season after featuring regularly under ex-Bayern coach Pep Guardiola.

“It does not matter whether I understand it or not,” Kimmich said. “The fact is I'm not satisfied with it and I want to change it.

“The coach knows I can play as a number six and at right-back, also in the centre of defence. From that he has many options to use me.

“I know my weaknesses and work on them – especially when I'm not playing, I try to do more. In the Bundesliga we have a good lead now and maybe [the team] will be rotated.”

Kimmich made 36 appearances in all competitions for Guardiola’s Bayern last season following his move from RB Leipzig in the summer of 2015. But a change of head coach has not favoured the 11-cap German international – even with Bayern still competing on three fronts.

During the 2015/16 campaign Kimmich made 15 Bundesliga starts for Guardiola’s Bayern with 10 of those coming at centre-back. However, the arrival of Mats Hummels from Borussia Dortmund has seen the youngster make just one league start at centre-back.

Instead, Kimmich has been used more frequently in the centre of midfield with seven of his 10 Bundesliga starts coming as a holding midfielder or in a more advanced role.

Regardless of what silverware Bayern scoop this season it will be a summer of change for a squad with a handful of ageing stars. And that is where Kimmich could take advantage if he sticks around. 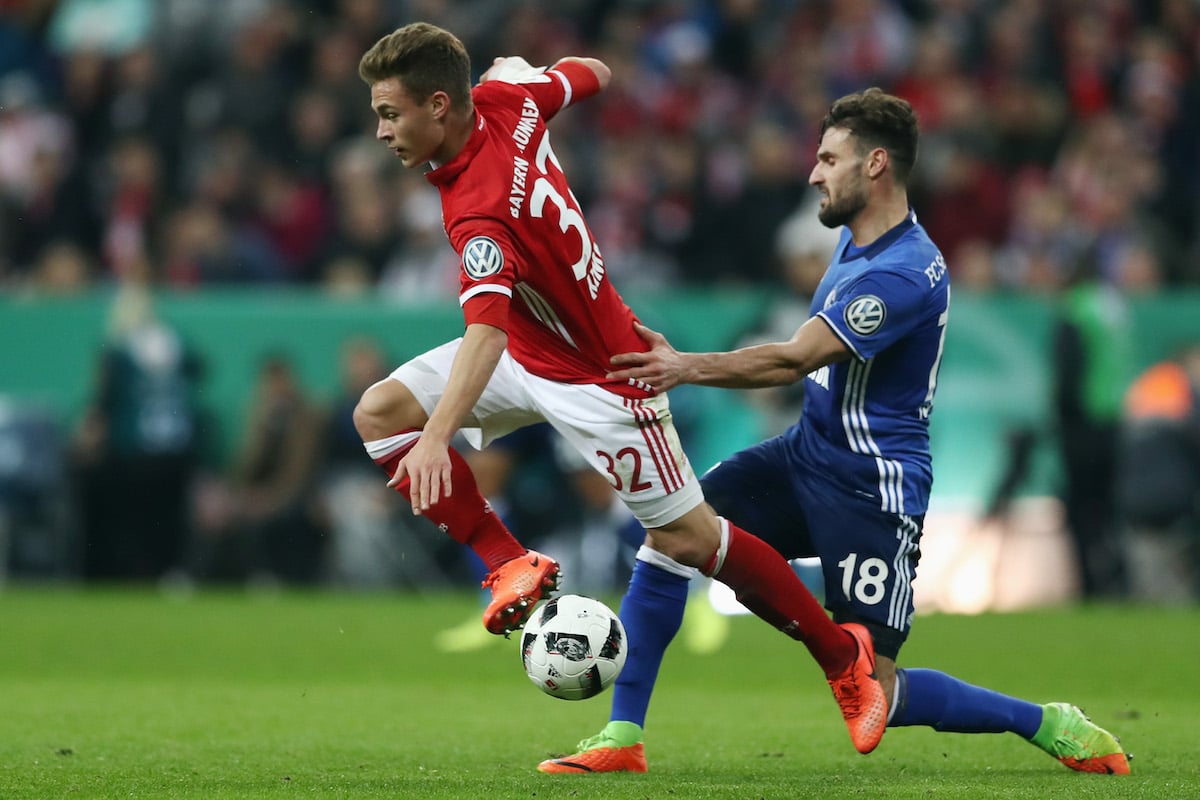 When Kimmich has been selected by Ancelotti he has, more often than not, found himself alongside Xabi Alonso or Arturo Vidal in a holding midfield role.

But the Spanish maestro has announced this month he will retire at the end of the season, opening up a space at number six.

Kimmich is not, arguably, a natural number six and tends to play marginally ahead of whoever he partners at the base of the Bayern midfield. But he brings athleticism to the position and compensates for Alonso's lack of mobility.

His defensive positioning needs work but he possesses the energy, work-rate and determination to get back into place and break up the play before keeping the ball moving with an impressive 87 per cent pass completion rate.

In the stills below you can see his starting position against Schalke at the beginning of January and the distance he travels to finally win the ball before offloading to another Bayern player. 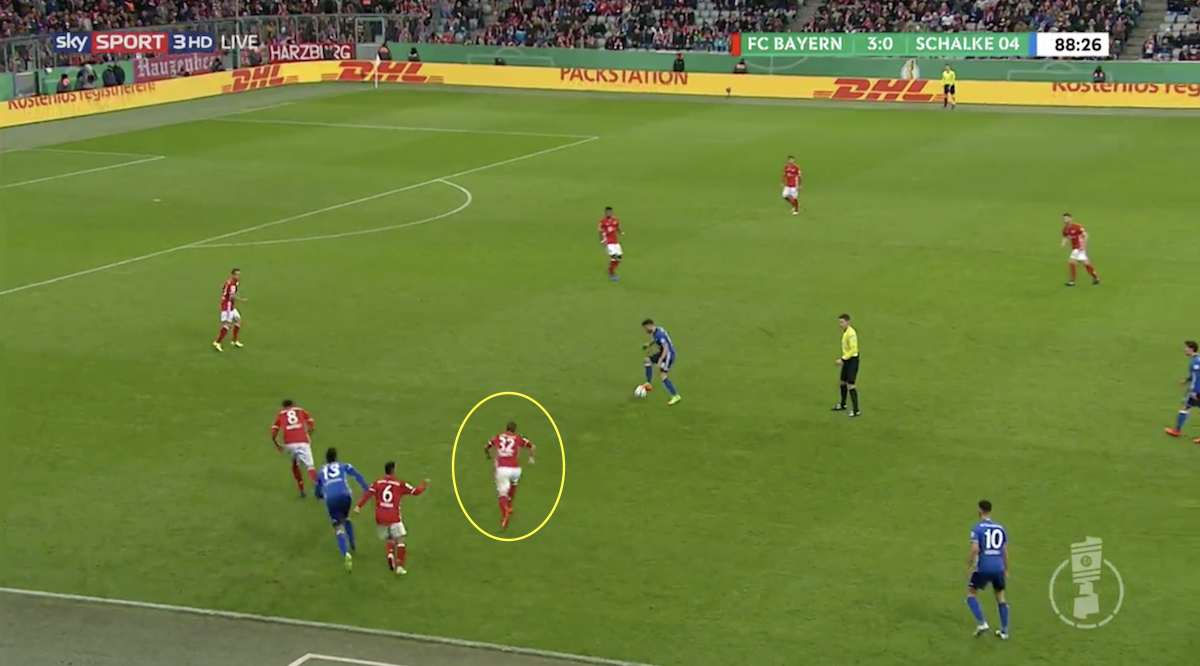 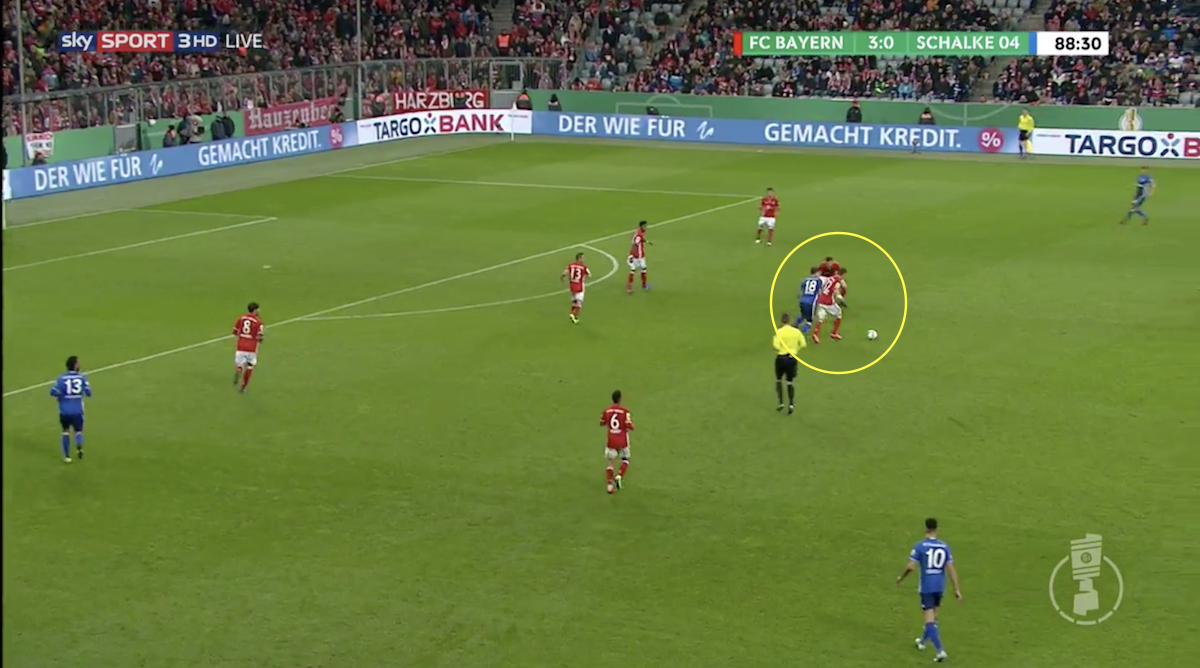 Another option for the Rottweil native is right-back. Bayern captain Philipp Lahm has also announced this season will be the last of a glittering career which has seen him lift every major trophy going.

That opens up another big spot in the side at right-back. The 33-year-old was a revelation in midfield under Guardiola but has reverted to his more natural slot at full-back during Ancelotti’s season at the helm and it remains to be seen whether Rafinha will take over that position on a full-time basis.

Kimmich has only been used sparingly at right-back this term – playing there twice – but he has drawn comparisons with the 113-cap Germany legend.

“He never makes a mistake, he never gives the ball away and he’s the perfect team-mate,” Kimmich told FourFourTwo magazine. “If people say I’m like him then it’s no bad thing.”

Again, Kimmich is a rough diamond in terms of his technical attributes. But he more than makes up for an deficiencies with his willingness to work hard and his one-on-one defending which stands out.

In the first still, where he is playing at right-back against Mainz, he covers Lahm (blue circle) when he is unable to halt the attack and gets tight to the attacker before winning the ball. 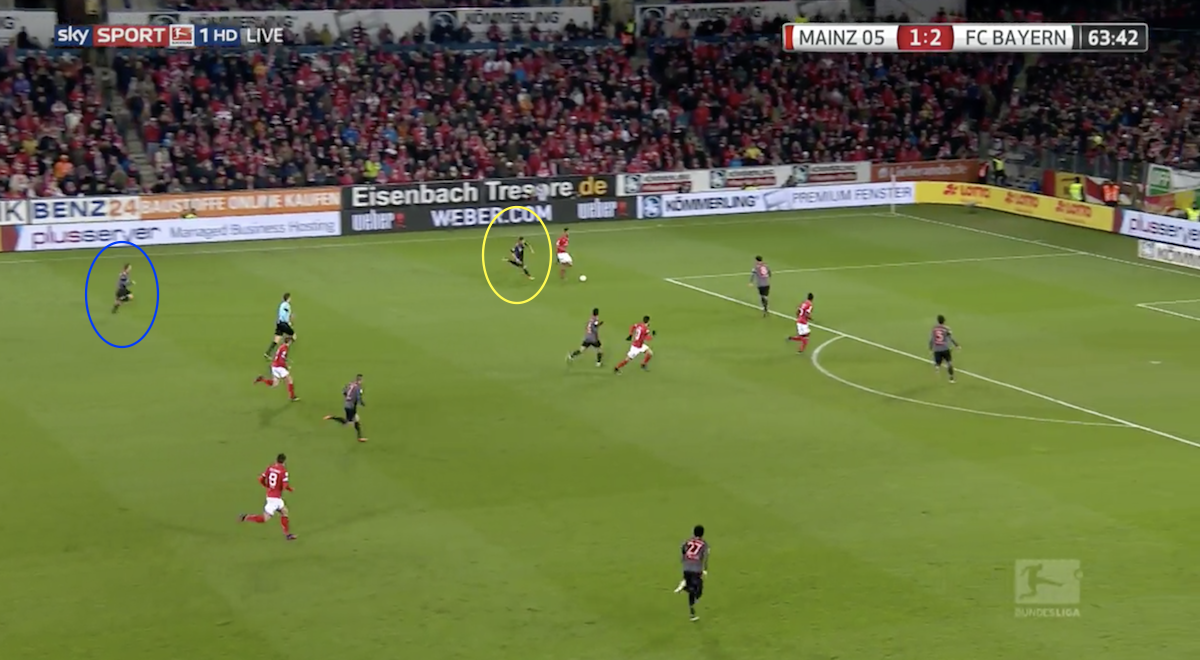 The other game in which Kimmich played right-back was against Bayer Leverkusen. Below he shows how quickly he closes down the space the receiving player is in, winning the challenge and quickly forcing Bayer back towards the halfway line and reducing the threat to Bayern’s goal. 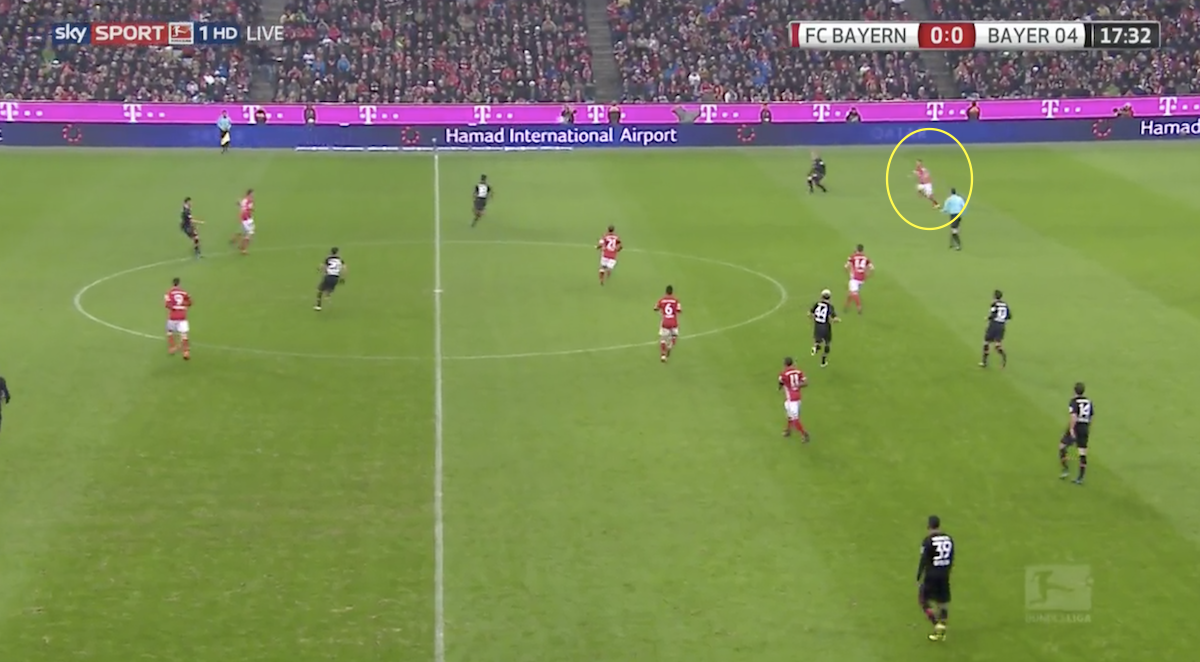 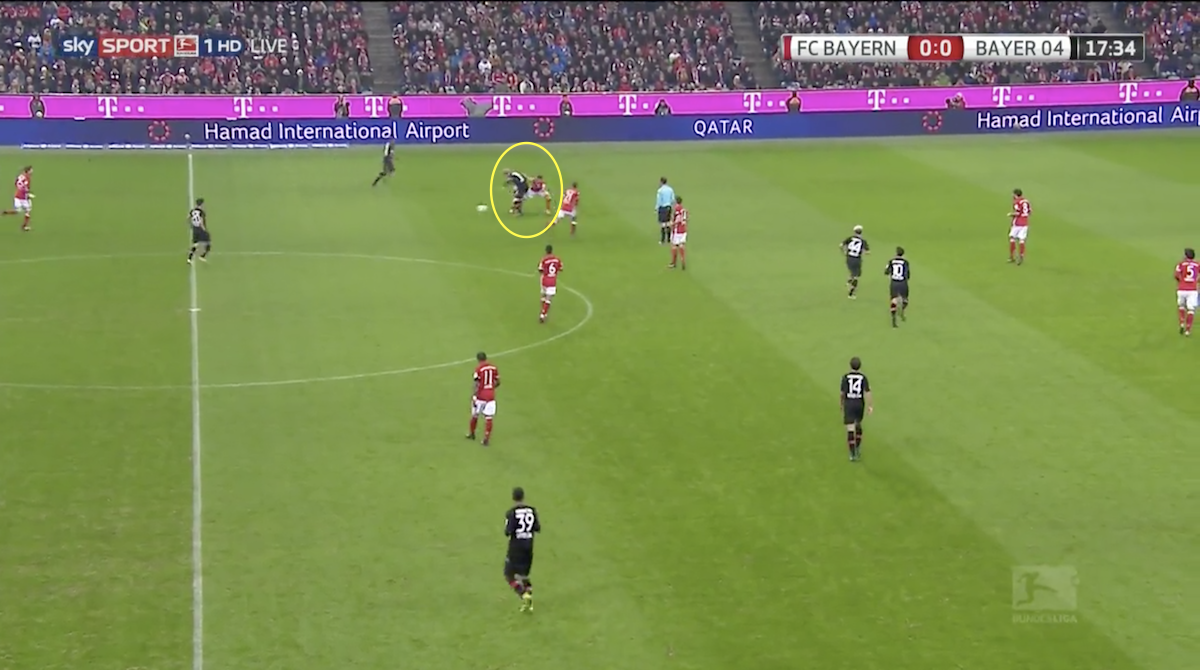 Of course, if Ancelotti does not see Kimmich getting any more minutes next season the 22-year-old could force a move away from the Allianz Arena and Manchester City, under Guardiola, would surely be top of the list of suitors.

Kimmich enjoyed a good relationship with the former Barcelona coach and told FourFourTwo: “I was very lucky to have had Pep Guardiola as a coach during my first season as he gave me the chance to experience some top-level football in some very important Bundesliga and Champions League games.”

With Pablo Zabaleta and Bacary Sagna ageing and out of contract, City are also likely to have a vacancy at right-back which would interest Kimmich. Furthermore, who better than Guardiola to improve under?

The question is whether the enthusiastic youngster sees his immediate future at Bayern or not. The openings are there but Ancelotti has not given the prodigy enough minutes to suggest he is in contention at this stage.

With the Bundesliga as good as wrapped up the Italian has the chance to bed the young German into his starting XI now. If he does not change that stance then that is as good an indicator as any that Kimmich’s future will lie elsewhere next season.