Bayern Munich's Champions League semi-final against Real Madrid was just 33 minutes old when Jérôme Boateng had to leave the field with an injury. He will now miss the rest of the Bundesliga season with an adductor-injury and there are doubts over whether he will turn out for the Bavarians again.

Those doubts were fueled by an interview which was published on the day of the first leg semi-final against Real Madrid. Speaking to the German magazine Socrates, the 29-year-old openly questioned his future at the club.

“I have experienced everything at Bayern,” Boateng said. “And I have reached a point in which I have to answer some questions to myself: ‘What are my goals in life? Do I want to continue to play at the same club under the same conditions?'”

It is not the first time Boateng has toyed with the idea of leaving Bayern. Last summer the 29-year-old was among those who wanted to exit the club.

It was never a happy marriage between Boateng and Ancelotti. The defender struggled with injuries following the 2016 European Championships, missing the start of the season with a muscle problem and then nine games from December to March due to a shoulder injury. As a result, he played just 19 matches in the Bundesliga, of which he started only ten. 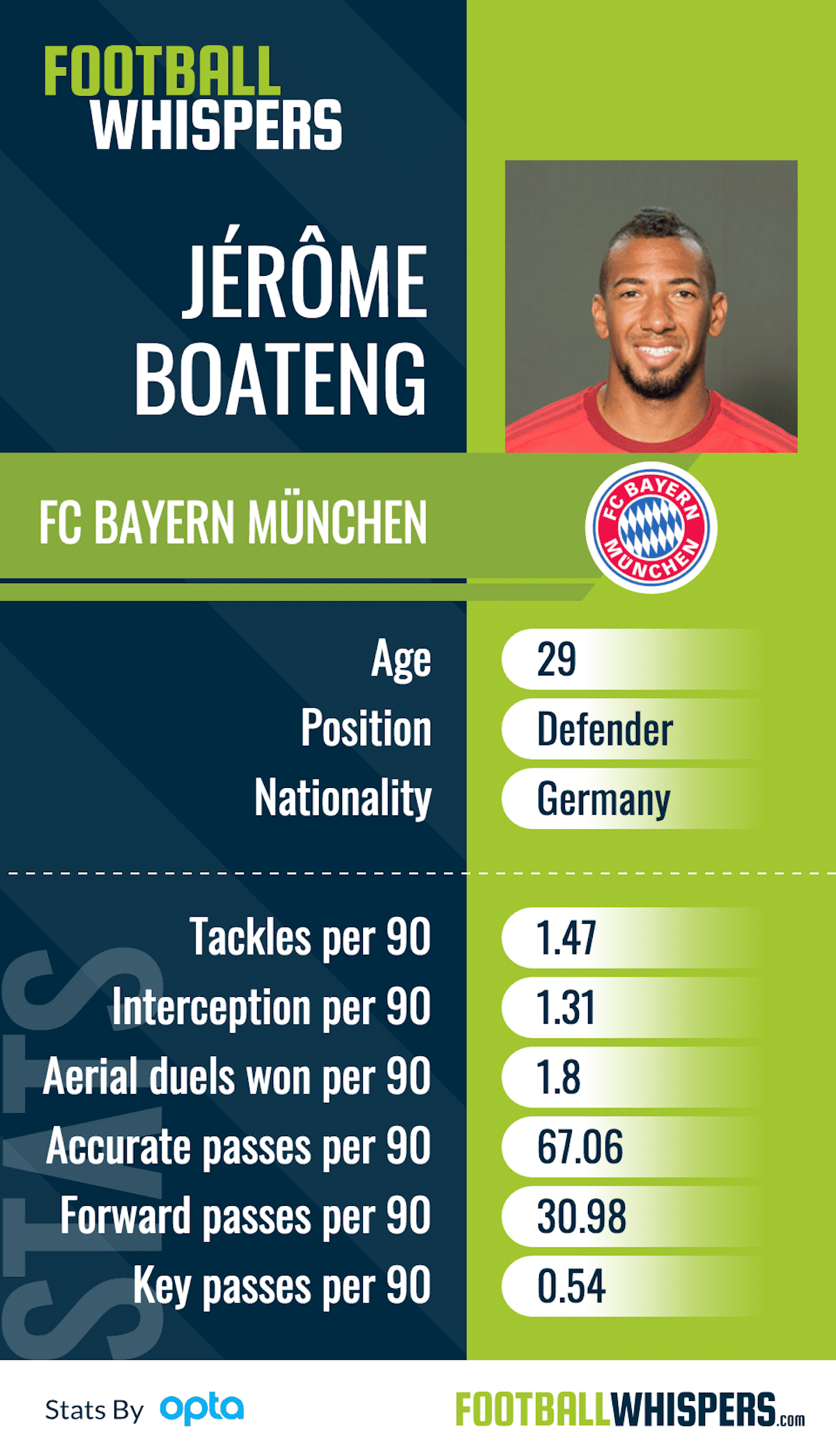 Nonetheless, Ancelotti seemed to prefer a pairing of Hummels and Javi Martínez in key games. Lacking the confidence of the head coach and the board, Boateng was seen as expendable with reports suggesting he was a Chelsea transfer target.

Bayern, in turn, were not entirely against a transfer. Boateng was seen as a means to generate cash in order to complete a deal for Arsenal’s Alexis Sánchez. But, in the end, Bayern decided against signing the Chilean and Boateng was ordered to stay put.

Boateng and Ancelotti, however, still failed to see eye-to-eye. Once again the defender started the season with muscle problems and was left out of the squad for the first three games of the Bundesliga season.

Returning for matchday four, the former Manchester City defender was left out the following week and then, more importantly, for the Champions League group stage match against Paris Saint-Germain.

That game would be the turning point for Bayern’s season. Ancelotti benched Franck Ribéry, Arjen Robben, Hummels and Rafinha and left Boateng out the squad entirely.

Bayern were taken apart by PSG and lost 3-0 at the Parc des Princes. Key players soon knocked on the door of president Uli Hoeneß’s office all carrying the same message: there can be no future with Ancelotti.

Bayern fired Ancelotti and brought Jupp Heynckes back to the Allianz Arena. Under Heynckes Bayern rediscovered their former glory and easily won the league despite trailing Borussia Dortmund by five points when the 72-year-old took over. 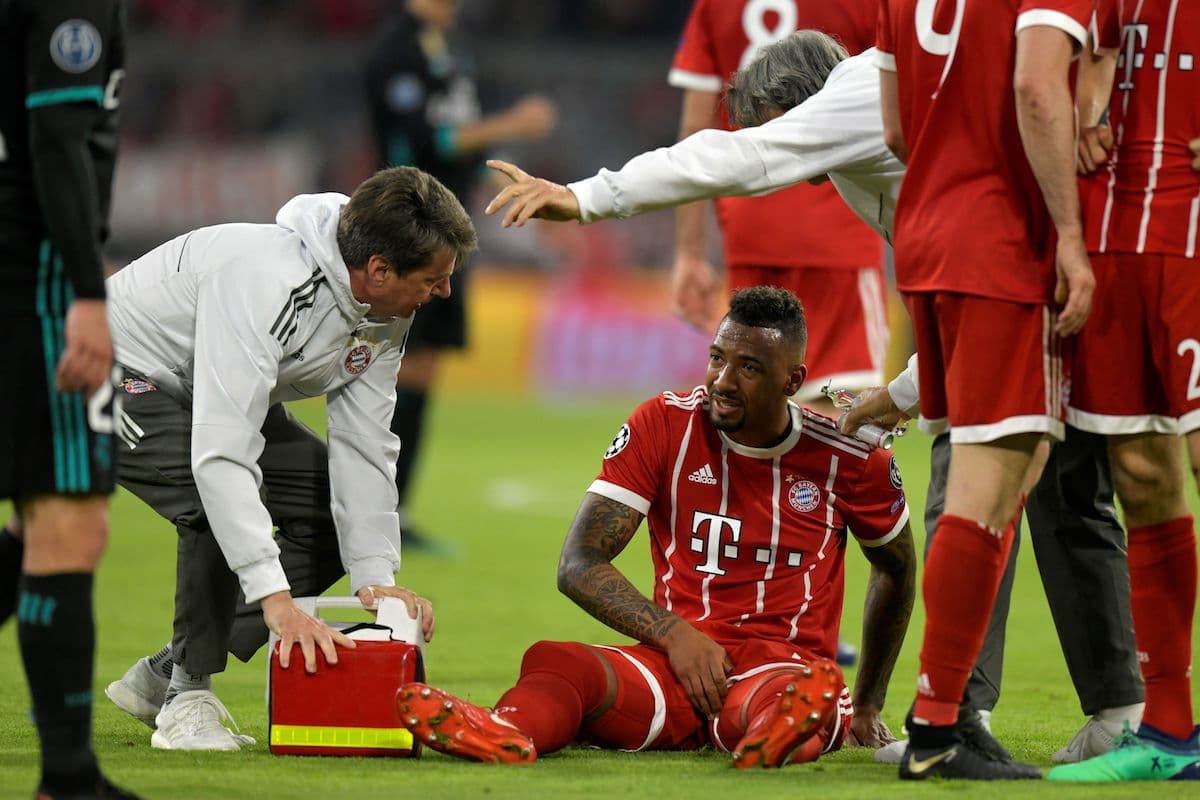 Heynckes also got the best out of Boateng. Before his injury against Real Madrid Boateng had played 26 Bundesliga games and ten of a possible 12 Champions League matches.

In those games he was among the best in the Bundesliga when it comes to distributing the ball from the back. Boateng ranks fourth among Bundesliga central defenders – just behind Hummels – when it comes to accurate passes played (67.07 per 90) and second – again behind his team-mate – for forward passes (30.98 per 90).

Previously known for lapses in concentration which resulted in unnecessary bookings early on in his career, Boateng was the second fairest player in the squad behind Niklas Süle, who committed 0.5 fouls per game in the Champions League. Committing just 0.7 fouls per game on average – Hummels averaged ome foul per game and Martínez 1.6 per game – Boateng now uses his athleticism and vision to greater effect in order to break down attacking moves by the opposition.

Despite the injury, Boateng is a key player for Bayern. But can the bosses convince him to stay? His statements in the interview with Socrates suggest he is looking for a new challenge and that could be in the Premier League.

Boateng managed 16 games for Manchester City in 2010/11 and there is a sense the German international is not finished with England yet. Furthermore, Boateng is managed by American entertainment company Roc Nation, which is owned by Jay-Z.

Roc Nation have recently signed Manchester United transfer target. Indeed, United, alongside City and Chelsea, are among the favourites to land the defender should he decide to leave the Allianz Arena.

There is another option, though. Should Germany win the World Cup in the summer, with a healthy Boateng in the squad, he might very well decide to leave Europe altogether and head to the United States to join a Major League Soccer franchise.

In the USA he could further grow his own brand beyond football. One thing is for certain, Boateng’s future at Bayern, now more than ever, is in doubt following his statements in Socrates.