Signed from Lyon last summer for €25million, French defender Samuel Umtiti’s arrival at the Camp Nou went largely unheralded. But, having followed up a breakthrough European Championships campaign on the international stage with a string of stellar displays for Barcelona, the 23-year-old has marked himself out as one of the finest young defenders on the planet.

Umtiti has settled into life in Catalonia so quickly that, whenever he is absent from the team, the Blaugrana desperately miss his defensive acumen and coolness in possession.

The four-cap Les Bleus star has guided Barça to victory in all 16 of his La Liga appearances this term, while Luis Enrique’s men have only won twice in the 11 matches he has missed.

Barcelona in #LaLiga this season:

Key to their success. ? pic.twitter.com/cjrV5hLLiz

So what exactly has made Umtiti so important to Barcelona’s fortunes this season, and why do they miss him so much when he isn’t there?

After a decade in Lyon’s famous youth academy, Umtiti cracked the seven-time French champions’ first-team in 2012 and quickly became a regular fixture in l’OL's  line-up. In his final season in Ligue 1 he was even voted the club’s player of the year ahead of top scorer Alexandre Lacazette.

After a poor start to the 2015/16 campaign Lyon recovered to finish as runners-up to champions Paris Saint-Germain and Umtiti’s consistency and leadership at the back was a major factor in Bruno Génésio’s side’s turnaround.

With the likes of John Stones, Leonardo Bonucci and Kalidou Koulibaly topping the list of centre-backs constantly linked with high-profile, big-money moves before the start of the 2016/17 season, Umtiti slipped somewhat under the radar, allowing Barça to secure his signature pretty much uncontested.

Long gone are the days when defenders were shin-kicking killjoys, intent solely on stifling the opposition by any means necessary. It used to be that, for the most part, a centre-back was brave, fearless and hard as nails, yet lacking in pace, skill and touch.

Yet nowadays much more is demanded of central defenders. No longer simply able to get by with a knack for leadership and love of a physical challenge, the modern centre-back must be fast, athletic and just as technically gifted as the attackers they come up against.

In this regard, Umtiti is the complete package. Though not especially tall for his position at 5’11”, the Frenchman is strong in the air and possesses the requisite upper-body strength to hold off oncoming attackers, while also being incredibly quick across the ground and able to anticipate how attacking moves will unfold in order to intervene and intercept.

Indeed, of all the players in the Barcelona squad, only 6ft 4ins Gerard Pique (2.2) wins more aerial duels per 90 minutes than Umtiti; he also ranks second only to the Spain superstar when it comes to shots blocked per 90 (0.4).

His pace is one of the factors that leads to him being so sorely missed by the Barca backline when he’s not there. Regular partner Pique is among the very best defenders of his generation and, though not lightening quick, is fast enough to cope with the rigorous speed of the modern game.

However, Enrique’s alternatives to Umtiti, Javier Mascherano and Jérémy Mathieu, 32 and 33 respectively, are not so well equipped to cope with the threat of a sprinting attacker.

The fact that Umtiti makes fewer tackles per 90 minutes (one) than his two positional rivals (2.5 and 1.4 respectively) could be seen as a negative, but it shows that, with sound positioning and recovery pace, he is less often threatened sufficiently to make tackling necessary. As legendary Italian defender Paolo Maldini once said: “If I have to make a tackle then I have already made a mistake.”

Where Umtiti really stands head and shoulders above Mascherano and Mathieu – and, to some extent, Piqué – is in his passing ability.

The ability to maintain possession and exert a technical and numerical superiority over the opposition by utilising swift passing combinations has long been a fundamental tenet of the way Barça play.

However, where during the Pep Guardiola era of dominance, the proficiency and accuracy of Barcelona’s passing rendered them almost invulnerable to a high press, Enrique’s side have often found themselves rattled when put under pressure in deep areas. 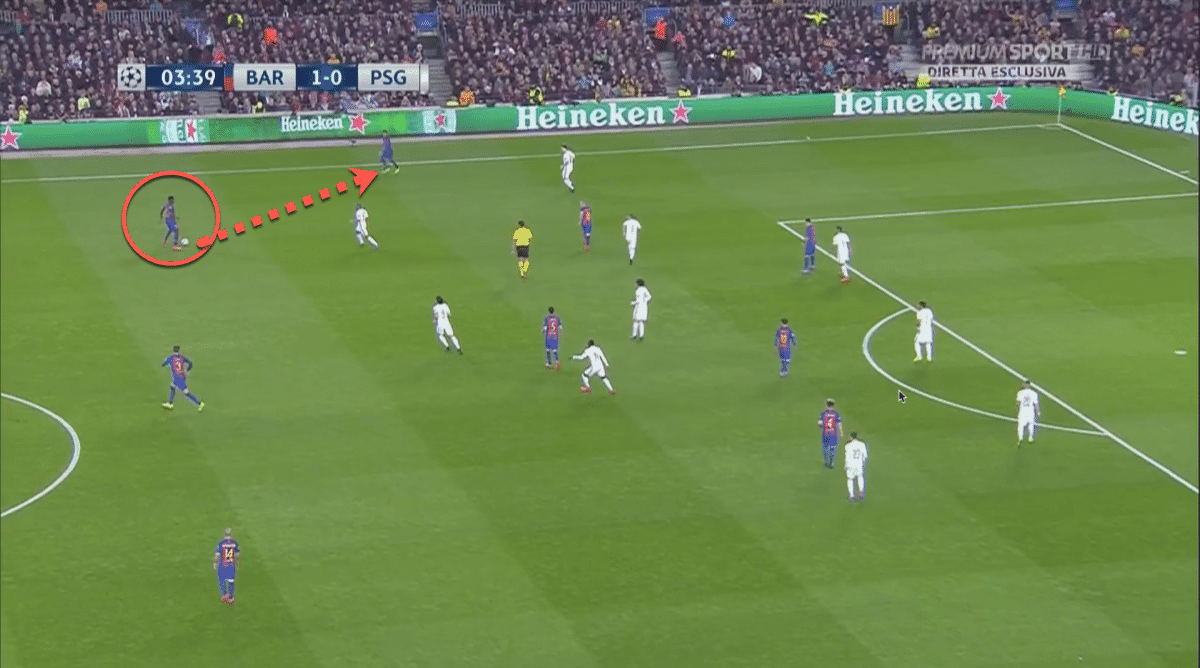 With Umtiti in the team this is much less of an issue. Not only is he incredibly accurate in his distribution, completing a stunning 93.5 per cent of his passes in La Liga this term – the best average of all Barcelonas’s outfield players – he is also able to make the kind of incisive forward passes that most defenders don’t even see, let alone try to execute.

The Frenchman’s vertical passing ability means that, as well as being a safe pair of hands in possession, he is also able to break the first line of an opposition’s press, alleviating the pressure that his team-mates are under and instigating attacks from deep. 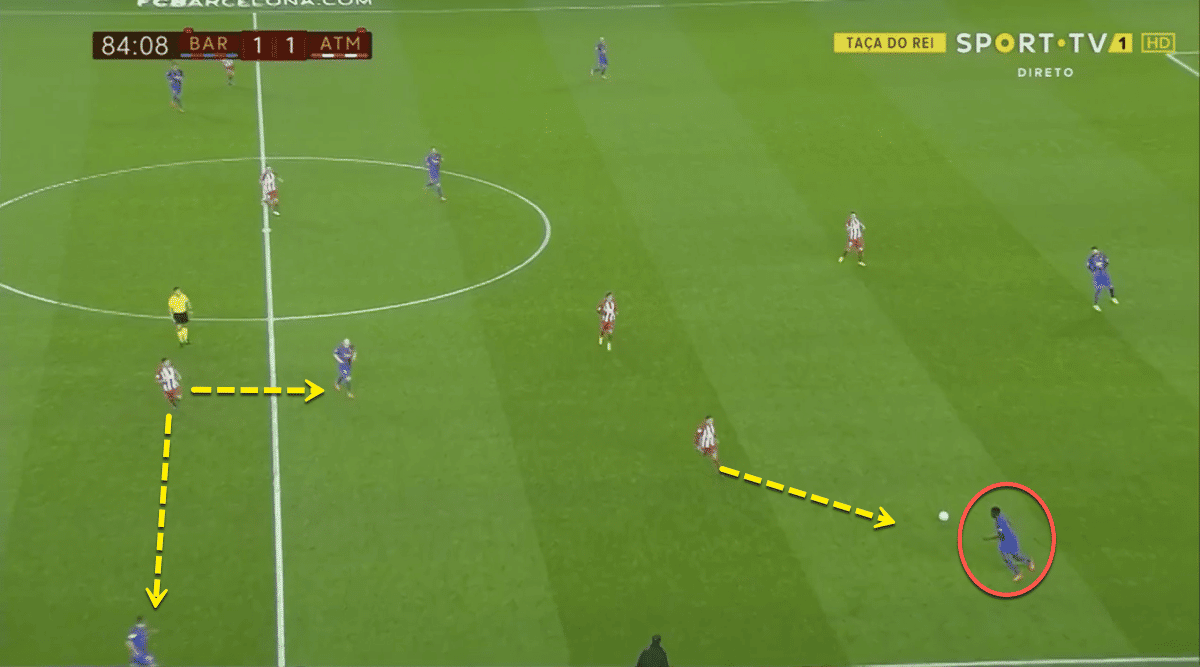 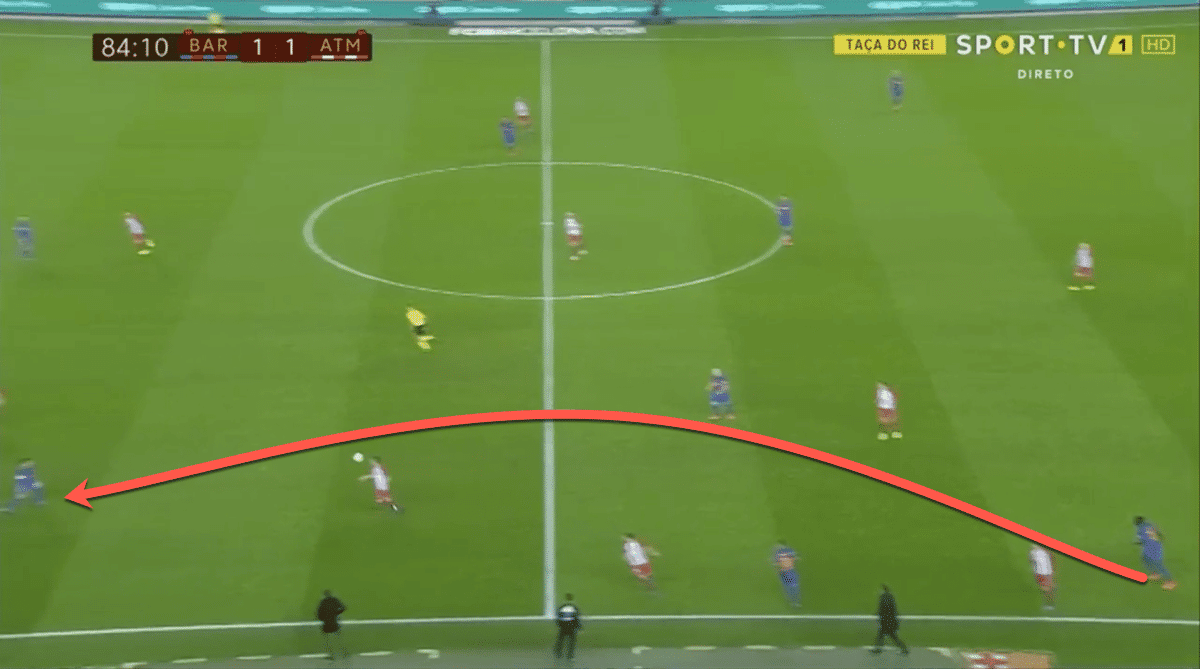 When closed down, most defenders will opt for the most simple and obvious pass available to them, usually sideways to a full-back or their central-defensive partner. However, any team using a well-drilled, coordinated press will cut off these passing lanes, ensuring either the ball is intercepted or the recipient is immediately denied space.

By playing forward into the midfield, Umtiti is able to buy his team some time on the ball while simultaneously frustrating the opposition by forcing them back.

In a possession-based system such as Barcelona’s, whose dominion over the ball means that defensive instincts are tested less frequently, Umtiti’s technical skills are of even greater value than his ability to snuff out a rival’s attack.

When Umtiti isn’t around, Barcelona are weaker with and without the ball.

Why Neymar Is Becoming As Important To Barcelona As Lionel Messi