On Wednesday night, Pierre-Emerick Aubameyang scored one and set up a late equaliser to seal Borussia Dortmund’s comeback against Real Madrid. It means that the German side top their UEFA Champions League group and scored an amazing 21 goals through the six games.

It’s a moment the Gabonese forward has dreamed of since he was a kid, putting the ball in the back of the net during a huge European night at the Santiago Bernabeu. Although it wasn't wearing the colour of jersey he would have been sporting in his dreams, it was a clear indication of how he would fit in Zidane's team and that it is a move the Madrid club should definitely pursue.

Often linked with moves to Arsenal, Liverpool and anyone in England looking for a superb goal-scorer, it seems that for now, Aubameyang is happy where he is, but a move to Los Blancos is definitely on his agenda. “Only Real Madrid could force me to leave Borussia Dortmund,” the forward clarified.

Before Wednesday’s final group game, the subject of Aubameyang was on everyone’s lips. The future of Karim Benzema is up in the air, rumours are that Zinedine Zidane is far from convinced that the Frenchman is the striker to lead this team further. With Dortmund in town, boss Thomas Tuchel was asked about Real’s interest in the 27-year-old before the game.

“It's normal that he wants to play at Real Madrid one day, any player with his talent would like to play at one of the best teams in the world”, he admitted.  “But my opinion is clear. We cannot achieve our objectives without him. He's an extraordinary player, he makes everyone better.”

It’s easy to see where Aubameyang would fit in at Madrid, the forward has spent the best years of his career playing in a front three and has gone from a winger, to a centre-forward and combined both these positions to make himself and very well-rounded attacker.

Both BVB’s goals on Wednesday showcased exactly what the striker has become and how he is the perfect fit for Zidane’s system. Two goals down, the Gabon international got them back in the game with a simple piece of movement.

One of the fastest strikers in the modern game, Aubameyang knows he has the beating of both Real defenders within a small window of space. 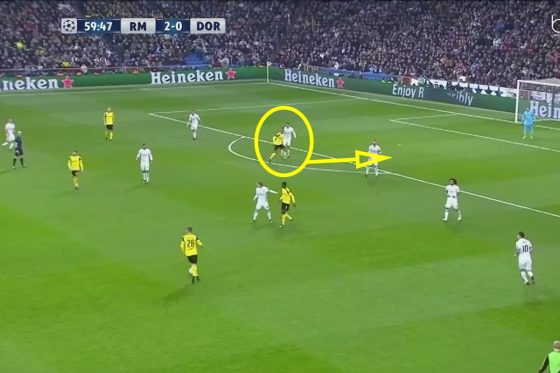 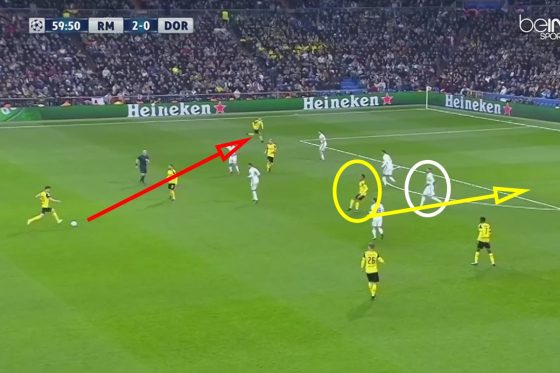 The graphics above show that he first moves towards Sergio Ramos, putting the Spaniard on alert, then he pulls into the midfield, creating separation between him and the centre-back. As soon as the ball is played out wide to Marcel Schmelzer, the forward hits the accelerator and flashed past Ramos and adds the easy finish.

On first view, it looks like an easy goal to score, but the timing, intelligence and skill needed to pull it off, against a club like Real, during a key Champions League game, is what makes him a special player.

Just like with Portugal, Cristiano Ronaldo is most effective when able to play on the wing and pull defenders from side to side with his movement. He loves to come in off the left flank and push the ball towards goal with his right. He’s made a – fairly decent – career out of it.

When Gareth Bale and Benzema have been out, the Portuguese superstar has had to play through the middle and although able to do the job better than most, he’s not as effective.

Aubameyang’s movement and ability to drift wide with pace is what makes him the ideal option. For the equaliser, again it was all about the former Saint-Etienne man’s intelligent run. He times his move in behind Sergio Ramos to perfection. The ball from Emre Mor down the channel was weighted perfectly and the forward already knew he had Ramos beaten for pace.

Raphael Varane had tried to play for offside, so with his arm in the air, he was out of position and was not able to recover quick enough to stop Aubameyang sliding the ball in for Marco Reus to equalise. Two excellent pieces of movement, in two different ways, showing just what he can produce.

Originally a product of the AC Milan youth system, he would develop further in France, playing for Dijon, Lille OSC and AS Monaco on loan, but it was when he signed permanently for Saint-Etienne that he really began to show his full potential.

After finding the net just twice in 19 games during his original loan spell at the Stade Geoffroy-Guichard, he would score 32 goals in two full seasons once he signed for Les Verts properly. In Ligue 1, his game developed from the pacey winger to the deadly frontman and you can see in his goals for BVB that has continued to progress in the Bundesliga. 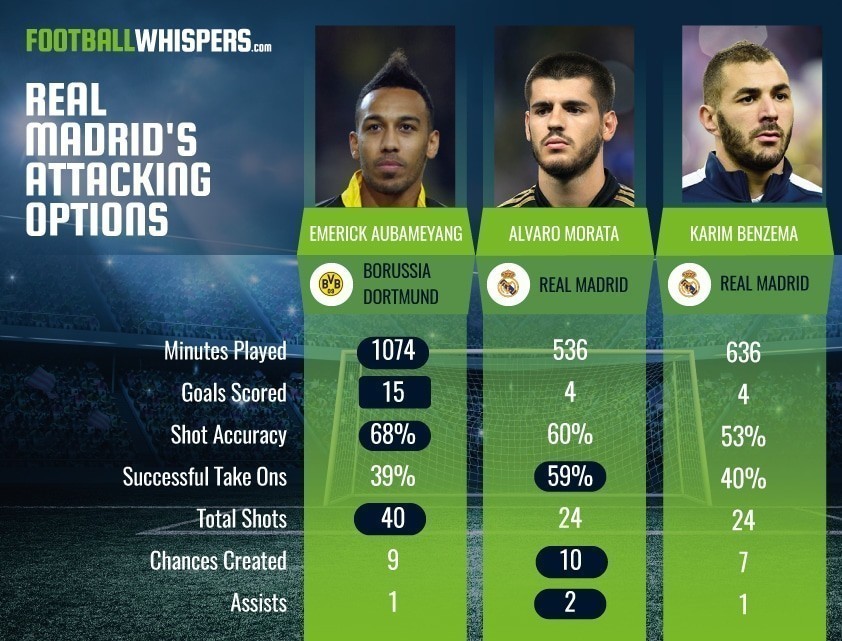 Aubameyang knows how to instinctively find space in the box, his special awareness is excellent, giving himself just half a yard to find a finish. He is able to score goals with both feet and with his head. With his winner against Bayern Munich, it was the inventiveness to prod home with his weaker left foot that made the difference.

His main competition at Real Madrid would be Karim Benzema and Alvaro Morata, both very different strikers in their own right. It’s unlikely both would still be at the club if the Spanish side made a move for Aubameyang and after only signing him permanently in the summer, Morata would likely keep his place for now.

The biggest criticism for Benzema from his time in the French national team was his inability to be that No.9 they craved. He spent too much time outside the box, looking for the ball in the areas where France are stacked with talent.

Regardless of the situation with the ongoing legal case with Mathieu Valbuena, it was mainly his performances for Les Bleus that has stopped him from regaining his place. However, when he plays for Real Madrid, he doesn’t have the same issues. He is a fox in the box, the typical poacher, ready and in the right position to put the ball in the net via any means necessary.

He scored both his goals against Dortmund on Wednesday this way and when he watch Los Blancos, you can see that in his overall game and how he scores most of his goals. Each of his four league strikes this term have come inside the penalty area, just outside the six-yard-box. It’s the same story in the Champions League, all four goals coming very centrally – two with his right, two with his head.

Aubameyang his 15 goals in the Bundesliga in just 12 games this campaign. Every one has come from inside the box. The majority with his right, but three with his head and four with his left. Benzema’s style is still different. He’s a bull, a powerful runner. He has the speed to beat most defenders, but it’s his strength that does most of the damage.

This is where Morata is different. Not blessed with the pace of the other two, he has guile, a deceptively good touch for a big striker and he’s more of a link-up man that a goal-hanger. Morata is the only one of the three that has scored from outside the area this season, but he has also created more chances than the others.

Per 90 minutes, Morata is actually averaging more shots per game than Benzema this season, with his four to the Frenchman’s 3.4 – plus, he is shooting more from both inside and outside the box. Morata gives you that threat from all over. Aubameyang’s numbers are similar to that of the former Olympique Lyonnais forward and that’s why it seems most likely he will be the one to give way if Real make a move for the BVB talisman.

“He is definitely a world class striker who has an incredible consistency in his game,” French international Antoine Griezmann said of Aubameyang when asked about the Dortmund striker. “Over the past few months, he has developed steadily. With him, you always realise that he is happy on the pitch.”

The Atletico forward admitted that he often tunes in to watch Dortmund, knowing you are guaranteed goals. With Aubameyang on the pitch, that is certainly true and soon it could see the duo go head-to-head as city rivals.

“He promised his grandfather that he would play for Real Madrid and since he was a little boy he spoke about Madrid and never about Barcelona,” Aubameyang’s mother, Margarita Crespo told Spanish newspaper AS.

“A move to Madrid would be lovely, but at the moment he is doing well at Dortmund and we will have to see what happens.”