On the surface Arsenal’s defence doesn’t look like it’s a problem. Some even consider their centre-back pairing of Laurent Koscielny and Shkodran Mustafi the best pairing in the Premier League. Before Mustafi’s Arsenal debut the team had conceded five goals in three league matches. In the nine league games that followed Arsenal, with Mustafi at the heart of their defence, conceded just the 7 goals at a rate of 0.77 goals per 90 minutes.

The centre-back pairing may have their limitations even if Arsenal fans will have you believe they are perfect but they’re not who the opposition seem to be getting the most joy out of. Six of the fifteen goals Arsenal have conceded this season have come from attacks down their left-hand side. What’s even more interesting is it doesn’t matter whether it’s Nacho Monreal or Kieran Gibbs playing that position, chances for the opposition keep arriving from that area of the pitch.

In matches against Manchester United, Ludogorets, Paris Saint-Germain, Watford and Liverpool the opposition have scored goals after crosses have arrived from their right-hand side of the pitch. For some reason the left-backs can’t/won’t/don’t stop the crosses. It won’t be long before teams start to target that area and Arsenal can’t have a weak link in their defence if they hope sustain a title challenge. 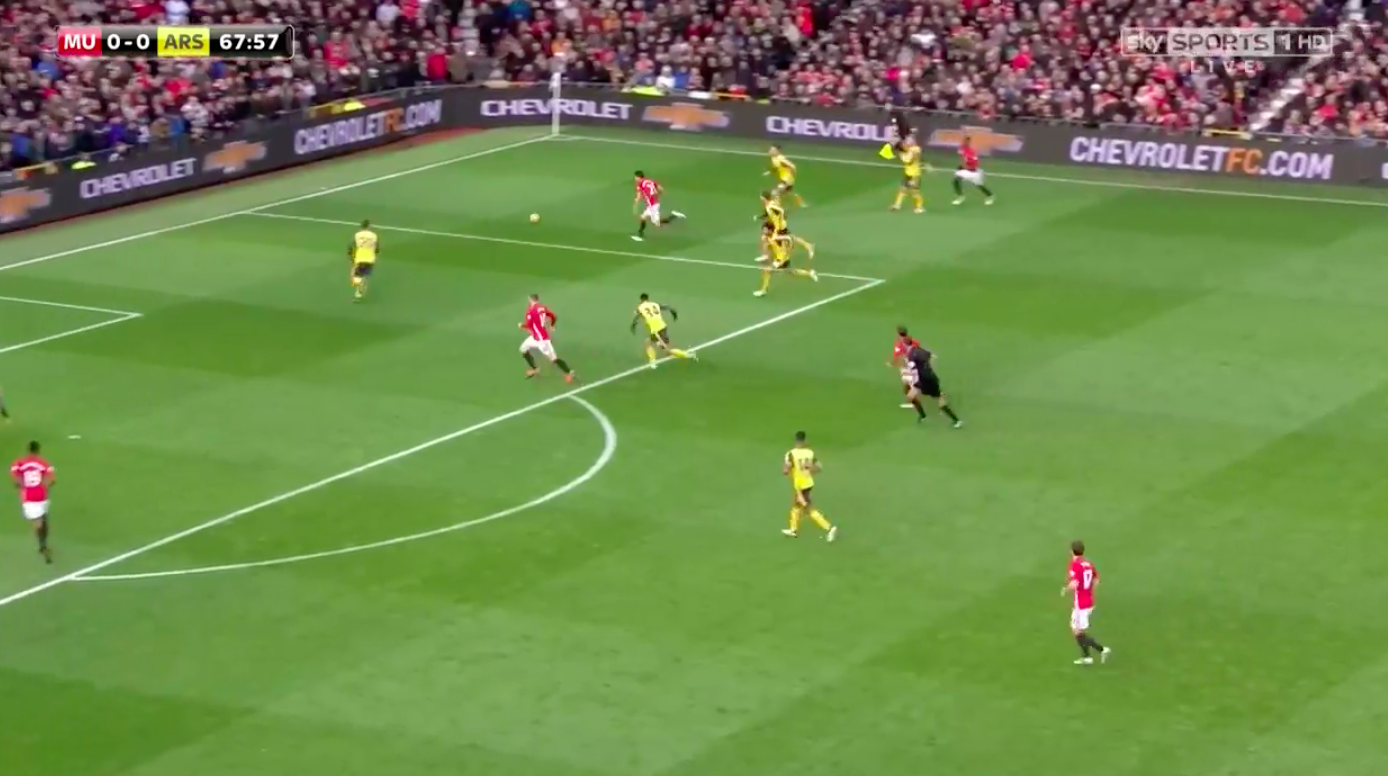 The two pictures above are taken in the build up to United’s goal on Saturday. In the first picture you see Monreal on the floor after Paul Pogba had muscled him out of possession. Even with the left-back sprawled out on the floor Arsenal still have five of their players in that area of the pitch. Three issues follow a) despite having two players squaring up to Pogba the Frenchman is able to get a pass off into space b) the Arsenal players on their heels as Ander Herrera breaks into space to get on the end of Pogba’s pass and c) the clutch of Arsenal players all get drawn to the ball and ignore Juan Mata.

While it may be hard to lay the blame squarely at the feet of Nacho Monreal for this goal it does come from Arsenal’s left side as they don’t prevent the cross from coming in which follows the trend. 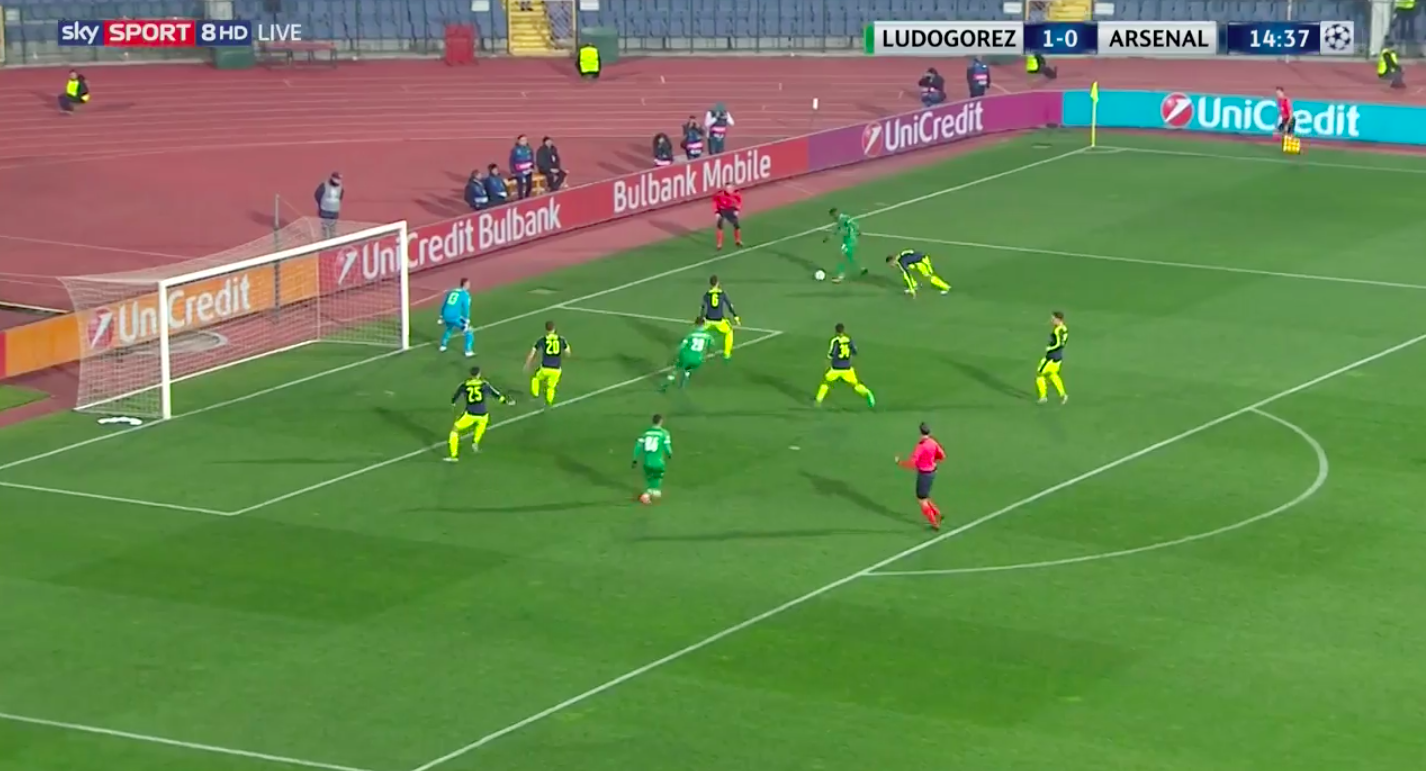 The three pictures above are all from the build up to Ludogorets’ second goal. The first picture shows the set-up to the chance. The midfielder is in possession but is reluctant to carry the ball forward because of the two Arsenal players in close proximity. Instead he looks to hit the space behind Gibbs in the hope to utilise Jonathan Cafu’s pace.

In the second picture you can see that Gibbs has matched Cafu for pace. But then the Arsenal man shows the Ludogorets player onto his stronger foot, his right foot, after Cafu feints to go inside before cutting back onto his favoured foot and drives forward before putting a cross in that the home side put away.

With so much space for Cafu why is Gibbs showing him onto his stronger foot in the penalty area?

Same scenario against PSG. Aurier is highlighted in the first picture, circled in white, with Monreal looking to press him, highlighted by the white arrow. PSG work the ball well and the ball is hit into the space behind Monreal for Aurier to attack. Monreal keeps pace with Aurier but as you can see in the third picture Aurier has no support and his only option is to put the ball into the box. Block that and it kills off the attack. Yet Monreal stands off him enough which allows Aurier to whip the ball in and Cavani nods home.

Against Watford, Daryl Janmaat and Nordin Amrabat attack down the Arsenal left. The latter releases the former and Monreal is unable to prevent the cross coming in. After a bit of pinball in the area Roberto Pereyra is able to fire home from inside the penalty area.

On the opening day of the season Liverpool hit four past a shellshocked Arsenal and two of those goals arrived from play on the Liverpool right. The first came after Monreal went 1 on 1 with Clyne but simply wasn’t quick enough to block the cross and Philippe Coutinho was there to poke the ball home. The second after Sadio Mane tore through the left side of the Arsenal defence to curl home the fourth goal. Again, Monreal was powerless to prevent it. If the opposition put a player with pace on Monreal’s side he appears to struggle.

There’s a myth about Nacho Monreal.

Ask neutrals and they will say he’s one of the most underrated full-backs in the league. But how many times can a variety of pundits, members of the media and fans claim he’s underrated before the Spanish left-back starts to become overrated? It’s like a default opinion of Monreal for the masses. Is he that underrated though? He doesn’t really impact the Arsenal attack (he joined the Gunners in 13/14 and has just the 5 assists) and as shown by the goals Arsenal have conceded down his flank, he’s not the most comfortable defensively when attacked directly. Monreal average 2.4 tackles and 4 interceptions per 90 minutes but he’s dribbled past 1.4 times and only manages 0.3 blocks.

Compare this to Hector Bellerin on the Arsenal right. The team rarely concede goals from attacks down their right and he’s involved in the attack, he’s managed to net 3 goals and 7 assists in just over two seasons of first-team football.

Perhaps now is the time for Arsene Wenger to bring Ricardo Rodriguez to England. Wolfsburg are struggling so far this season and currently sit in 14th position with 9 points from their first 11 matches. The Swiss full-back needs a move before he stagnates and Arsenal could be the ideal club for him. The set piece specialist 2.2 tackles and 1.9 interceptions per 90 minutes, It’s a drop on what Monreal does but Rodriguez is only dribbled past, on average over his entire Wolfsburg career, 0.6 times with the figure standing at 0.1 so far this season. He manages 0.5 blocks, slightly more than Monreal, and he chips in with goals and assists – 19 goals and 26 assists in just over 5 seasons in Germany.