Arsenal‘s extended back-three experiment appears to be over. Having switched to a 3-4-2-1 formation towards the end of last season, with success initially, Arsène Wenger has recently reverted to the 4-2-3-1 system he has favoured for several years.

The move, as much as anything, could be the experienced French manager's way of cramming as many of his vast array of talented attackers into his starting XI, a concern heightened by the January arrivals of Pierre-Emerick Aubameyang and Henrikh Mkhitaryan.

But the switch away from a back three with wing-backs means Wenger now has a selection conundrum on his hands. With one fewer defender in his line-up, the Gunners boss must now choose between Nacho Monreal, who had been playing on the left of the three-man backline, summer signing Sead Kolašinac and versatile 20-year-old Ainsley Maitland Niles.

As the below graphic shows, when analysing each players statistical merits, the battle for the left-back spot is evenly fought, with each man offering something different and excelling in at least one area. 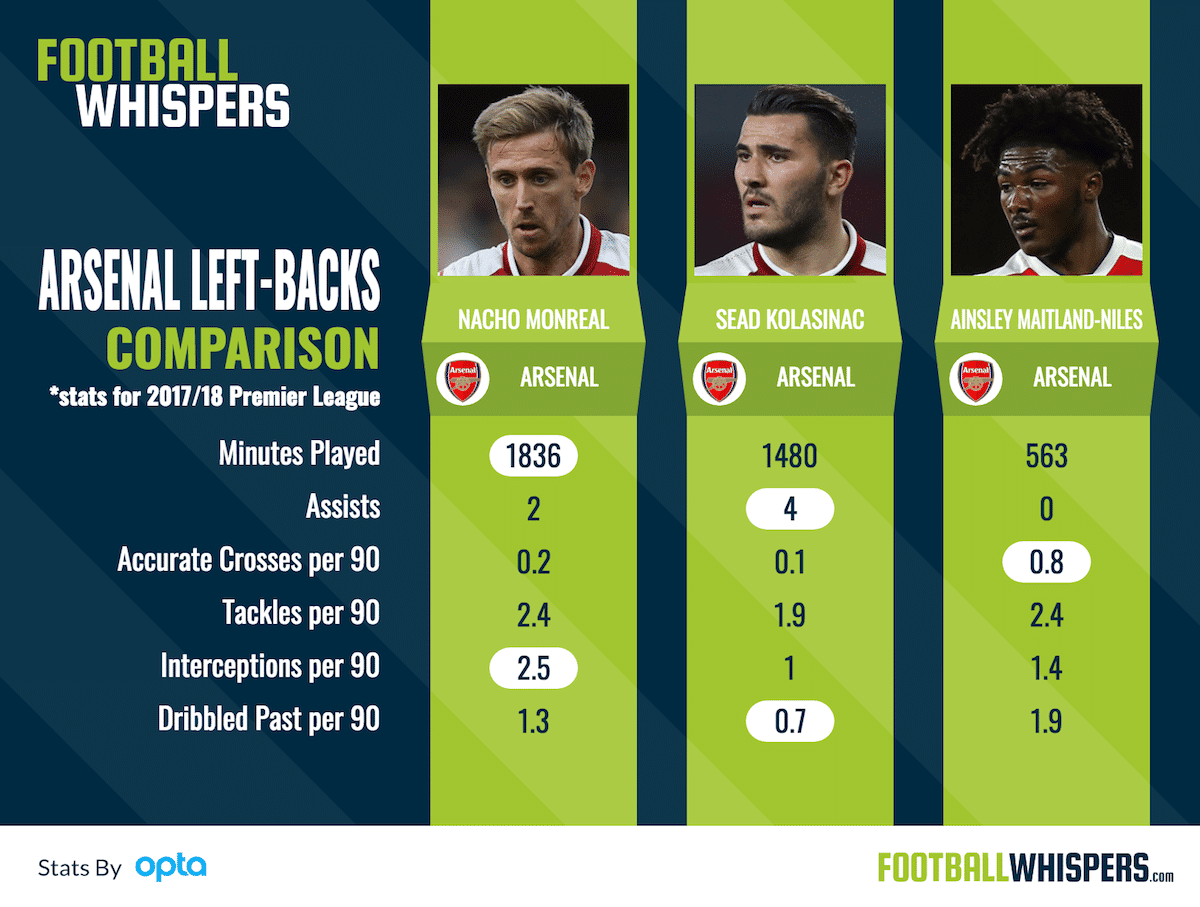 Monreal, an £8.3million signing from Málaga in 2013, is better at breaking up play then both of his positional rivals, averaging an impressive 2.4 tackles and 2.5 interceptions per 90 in the Premier League so far this season.

This should perhaps come as no surprise, as the Spanish international, at 31, is the most experienced player of the three, and displays astute anticipation in reading the game to thwart opposition attacks.

Kolašinac, who was a regular starter earlier in the season after his arrival from Schalke on a fee transfer, has slipped down the pecking order somewhat of late but is a powerful presence. Although his tackling and interceptions numbers are not as impressive at Monreal's, crucially, he is dribbled past less frequently than either the Spaniard or Maitland-Niles, showing how effective he is in defending in one-v-one situations.

Maitland-Niles, who broke into the side this term as a wing-back but is more comfortable further forward, represents the least defensively able option of the three. But the England Under-21s star offers more in attack, and could therefore be the best option in games against weaker opposition, allowing Arsenal to attack more fluidly and providing ammunition for the forwards with his 0.8 accurate crosses per 90.

While there is no definitive answer to which of the trio is the best option to start regularly at left-back for Arsenal, the stats show Wenger now has three very different options for the position, allowing the Frenchman to make his selection based on how to best exploit the weaknesses of each upcoming opponent.