Manchester City might be running away at the top of the Premier League – they're just two wins from clinching the title – but there’s a strong case to be made that Burnley have, so far, been the success story of the 2017/18 season.

Sean Dyche’s side may have fallen away from their high of fourth place in December, but the Clarets are still enjoying an exceptional campaign. And it’s not entirely beyond the realms of possibility that Burnley might finish the season in the top six, with just five points separating them and Arsenal in the table.

Dyche has, rightly, received credit for one of the best coaching jobs the Premier League has seen in several years, and a number of his players have been hailed too.

Nick Pope and James Tarkowski have received England call-ups, while Ben Mee and Jack Cork couldn't have been far away either. Ashley Barnes is another who is receiving interntional recognition after dismantling West Ham United last weekend.

But one player whose contribution hasn’t been noted by the masses is Jóhann Berg Guðmundsson.

The Icelander has been a key member of Dyche’s first team since October, and has held down his position since he was brought into the fold.

But while Guðmundsson might not have been handed any awards, or even discussed on Match of the Day, his contribution has piqued the interest of Leicester City, Newcastle United and Southampton, who are reported to be weighing up a £20million move for the Burnley man this summer.

So which of the trio mentioned needs him most? And how big a blow would the departure of the 27-year-old be to Burnley? Would Dyche struggle to replace him at Turf Moor? And would £20 million be a fair price for the former Charlton Athletic man? We have attempted to answer all those questions.

This season Guðmundsson has been predominantly used on the right side of a 4-4-2 formation. He has occasionally been deployed on the opposite flank of the same system, but there’s no doubt where Dyche believes the Icelander to be best.

At Leicester there currently isn’t a place for Guðmundsson in their starting line-up. However, there soon could be if Riyad Mahrez finally gets his wish and leaves the King Power Stadium in the summer.

Mahrez, as Guðmundsson does at Burnley, plays on the right side of a midfield four and so the Icelandic international could slot in without much fuss in the event of a sale at the end of the season.

Mahrez has averaged 0.92 open play key passes per 90 in the Premier League this season, while Guðmundsson has averaged 0.89. And the Leicester winger has an xA of 4.93 for the campaign compared to the Burnley man's 2.06.

The Algerian is also more of a goal threat than his Burnley counterpart, with 2.44 scoring attempts per 90 to 1.75.

However, Dyche demands greater defensive work from his wide players than Claude Puel, which is why Guðmundsson does make more tackles than Mahrez (1.55 to 1.20) and interceptions (1.20 to 0.68) per 90.

Burnley also have less of the ball on average compared to Leicester, so it's not a shock Guðmundsson isn't as threatening as Mahrez.

Stylistically, however, they aren't worlds apart and it’s easy to see why Leicester would line up the Icelander as contingency plan if Mahrez leaves. He may not possess the same raw quality, but he could certainly fill a gaping hole that would be left.

At Newcastle, Guðmundsson might be required to be more of an out-and-out attacker. Rafael Benitez has often employed a 4-2-3-1 shape this season, with Christian Atsu and Matt Ritchie used as inside forwards as much as wingers.

But comparing Newcastle’s current options with Guðmundsson through measurements such as key passes and crosses, the Burnley man comes out shining once again.

Then there’s Southampton. Of course, it’s unlikely Guðmundsson would be keen on a move to St Mary’s should the Saints suffer relegation – at 27 years old he  won’t want to spend the best years of his career in the Championship.

What’s more Guðmundsson would also find competition rather stiff for his favoured position on the right side of midfield, with both James Ward-Prowse and Nathan Redmond unlikely to move on. 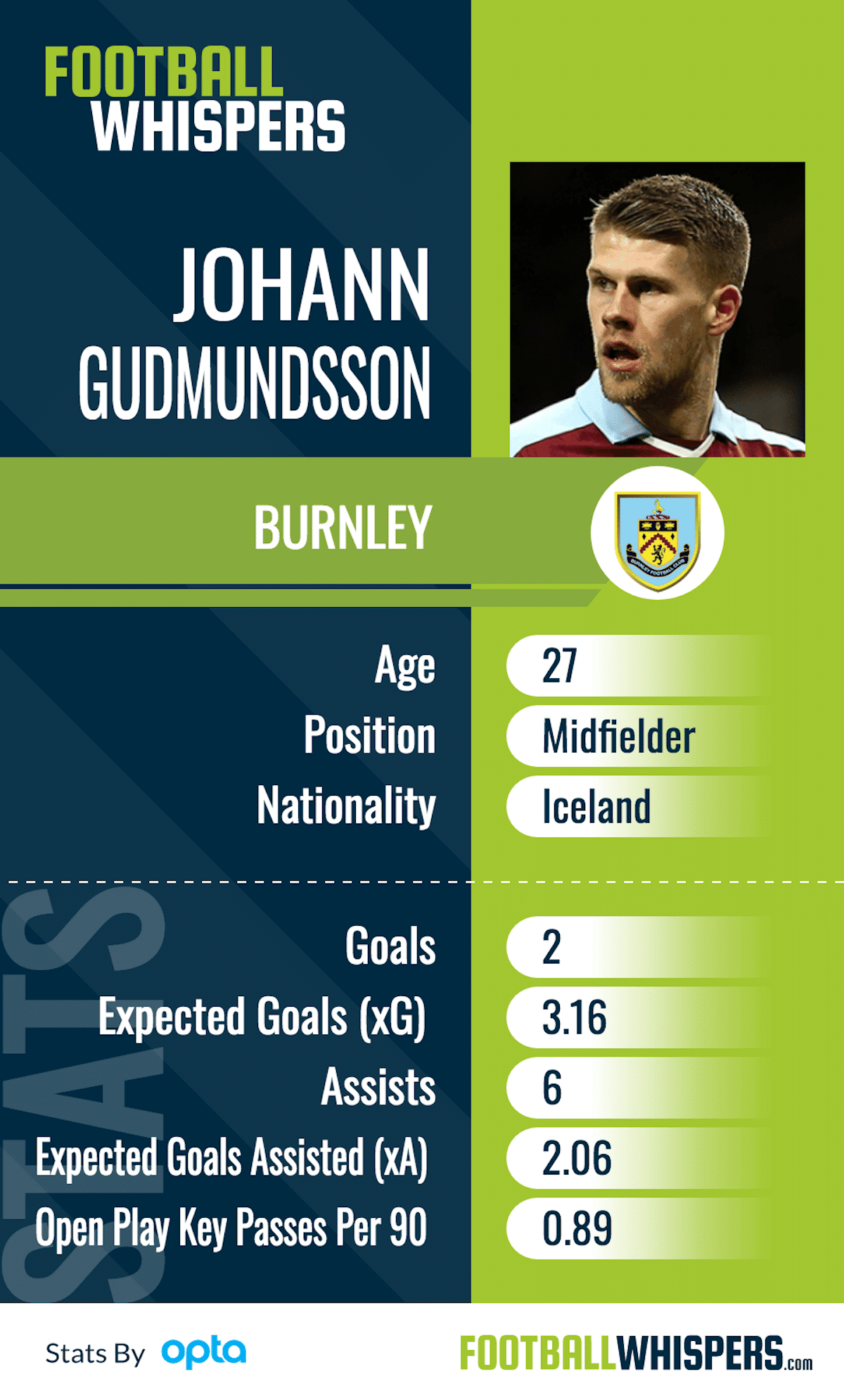 Of course, it’s possible Guðmundssonn simply chooses to stay where he is. The Icelander’s exit would be harshly felt at Turf Moor and, in the skewed world of modern football, £20million is no longer a game-changer figure for a club like Burnley.

He is one of Burnley’s best passers of the ball, one of their best dribblers and carries a goal threat that eases the burden on the likes of Barnes and Robbie Brady. He is a facilitator. He makes others around him better and so taking him out of the equation would have a knock-on effect at Burnley.

It says volumes about just how well Guðmundsson is playing that he seemingly has so many options this summer. He has been a quiet hero in Burnley's success story, it would be disappointing for the club's fans if he were to move on and become the villain.