Chelsea sit atop the Premier League after a run of eight consecutive wins. Despite this ominous run of form, Conte is continually linked with potential players ahead of the January transfer window. Clubs are always looking to adapt and evolve and it’s because of this even the most in-form teams will be on the lookout for potential signings. Chelsea are in a luxurious position of not having to spend to improve.

Chelsea have been linked with an array of centre-backs lately even after paying £35 million to re-sign David Luiz from PSG late in August. With both John Terry and Gary Cahill coming to the end of their careers it’s time the club make the move and bring in reinforcements/upgrades. The likes of AC Milan’s Alessio Romagnoli, Burnley’s Michael Keane, Boro’s Ben Gibson, Juventus’ Leonardo Bonucci and Hoffenheim’s Niklas Sule have all been linked. But for once, perhaps Chelsea don’t have to spend big.

Perhaps the answer to their defensive question is a player they currently have out on loan – Andreas Christensen. The 20-year-old Dane has impressed while on loan at Gladbach and there were even reports linking him with a £20 million move to the Bundesliga club in the summer but a deal wasn’t struck. He may not be the most glamourous of names but he makes perfect sense in terms of suitability but to understand the suitability of the player you need to know how Chelsea line-up. 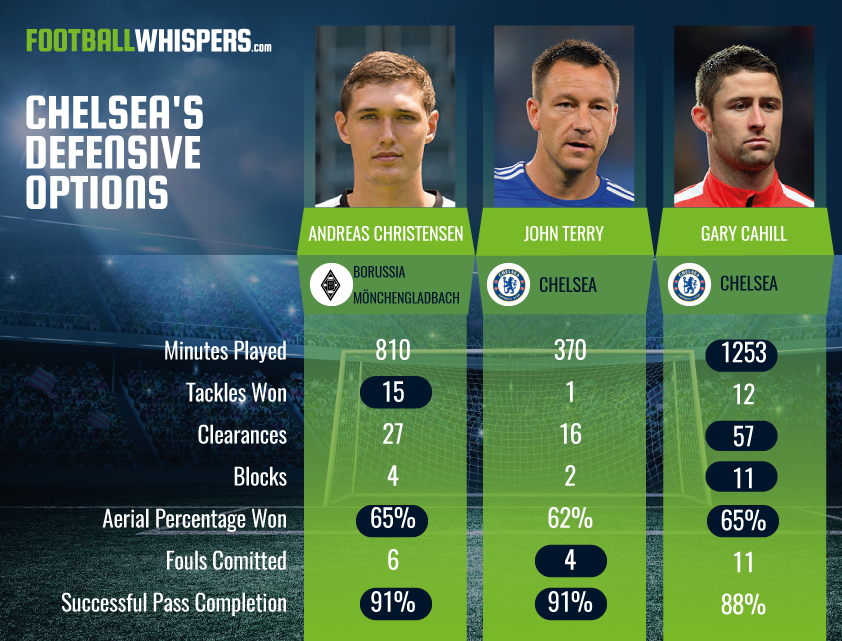 It may sound cliche but a month in football really is a long time. Chelsea manager Antonio Conte went from being the favourite to be sacked in September to manager of the month for October. His Chelsea side went from porous and exposed defensively to almost impenetrable. As detailed in an earlier article which can be found here, Conte originally had Chelsea lining up in a 433 system. Something wasn’t clicking though and after an impressive start to the season Chelsea were without a win in three matches after the 3-0 loss to Arsenal.

In a twisted way it was a loss, and a performance, that Chelsea needed. It sparked Conte into life and it lead to him transforming Chelsea into his side. He returned to a back three system which had served him so well during his Juventus days. David Luiz has found a new lease of life as a libero and despite there not being much creativity in a midfield duo of N’Golo Kante and Nemanja Matic the balance seems to be perfect, for now. The switch in formation saw them go 601 minutes without conceding a goal and it’s easy to see why it’s been so effective. 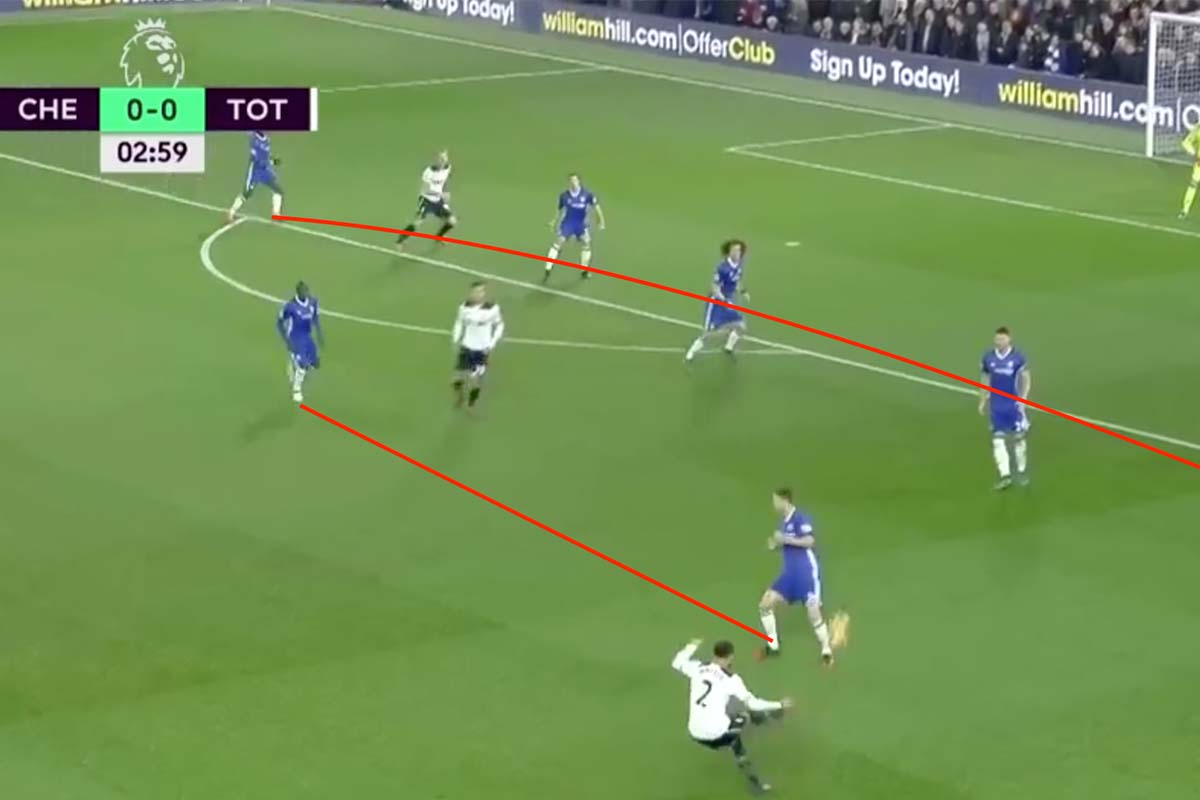 In the picture above you can see the compact and narrow Chelsea back five when when the wing-backs have dropped into full-back positions. The pair of N’Golo Kante and Nemanja Matic are screening ahead of the defence ensuring that there are no easy passes able to be played into feet. It’s difficult for the opposition to play through these lines because of the positioning of the Chelsea team and Kyle Walker is forced to just put a cross into the area which is headed away. 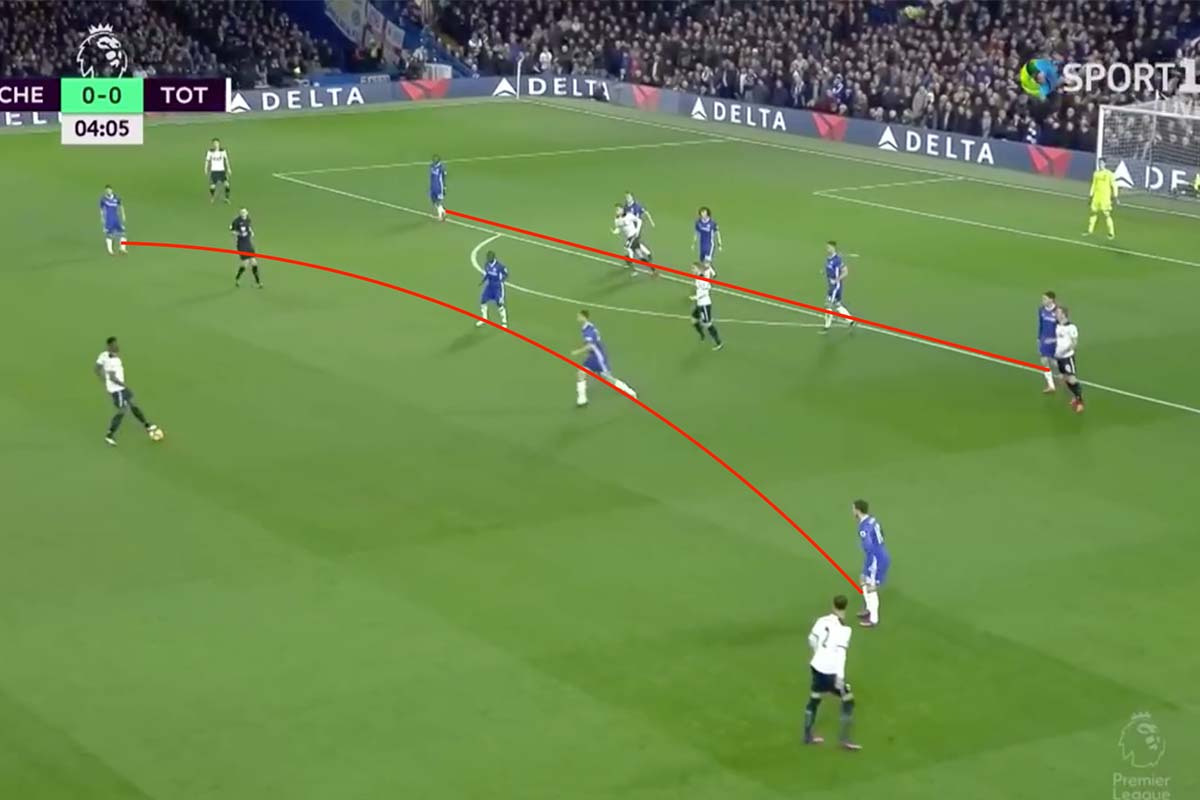 When you think of Chelsea under Conte, after the switch in formation anyway, you think of a free-scoring side. While when they are on the attack they push bodies forward it’s worth noting when they’re defending they get nine outfield players behind the ball when possible. Hazard is back to his destructive best offensively but he’s also doing the defensive work, a part of his game which often goes unnoticed. Chelsea dig their heels in and it means the opposition, Spurs in this case, have to play through a line of four and then a line of five. 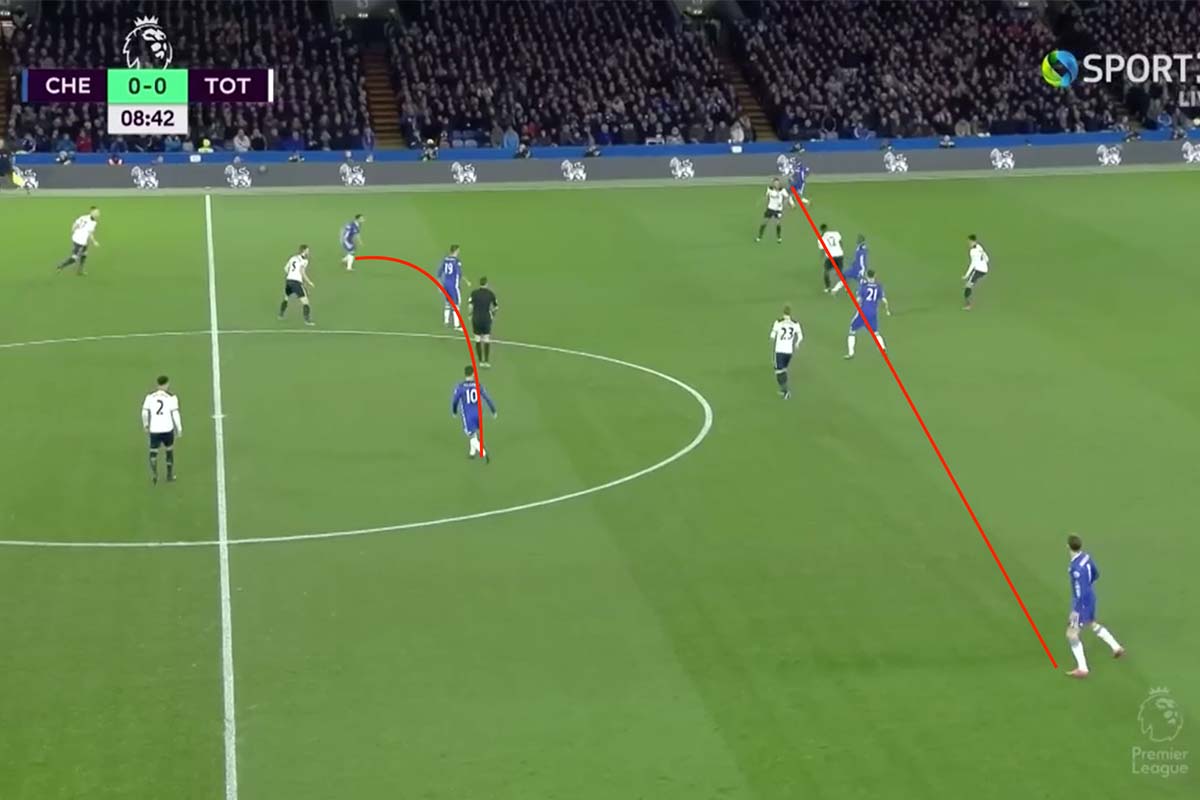 In this picture we see Chelsea’s well organised shape when the opposition are building from the back. Here you see the three attackers have all come narrow, the wing-backs are in line with the centre-midfielders and the spacing between the lines, given how advanced they are up the pitch, is compact. There’s no Chelsea player in the attacking half of the pitch meaning if they regain possession they can build as a team and the striker isn’t isolated.

All three examples show just how well structured, well disciplined and well organised Chelsea are in this new system under Conte.

The Return of the Real Hazard. 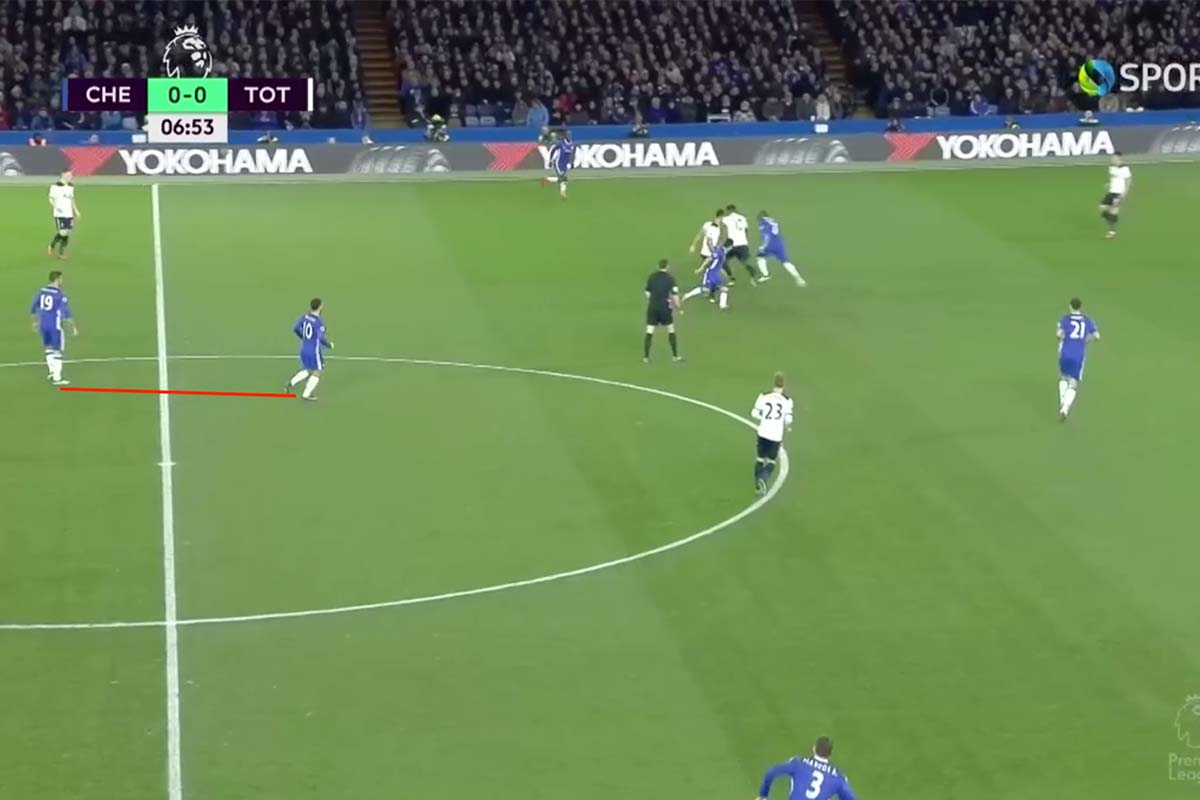 Although Chelsea line up with Eden Hazard and Pedro supporting Diego Costa it’s usually the latter who gets more stuck in with midfield work. This, at times, almost means Hazard is playing as a support striker and Chelsea have a two man attack. If you look at the average position map that Whoscored.com have for every match Hazard is sometimes higher up than Costa. But the pair make quite the duo as we see below. 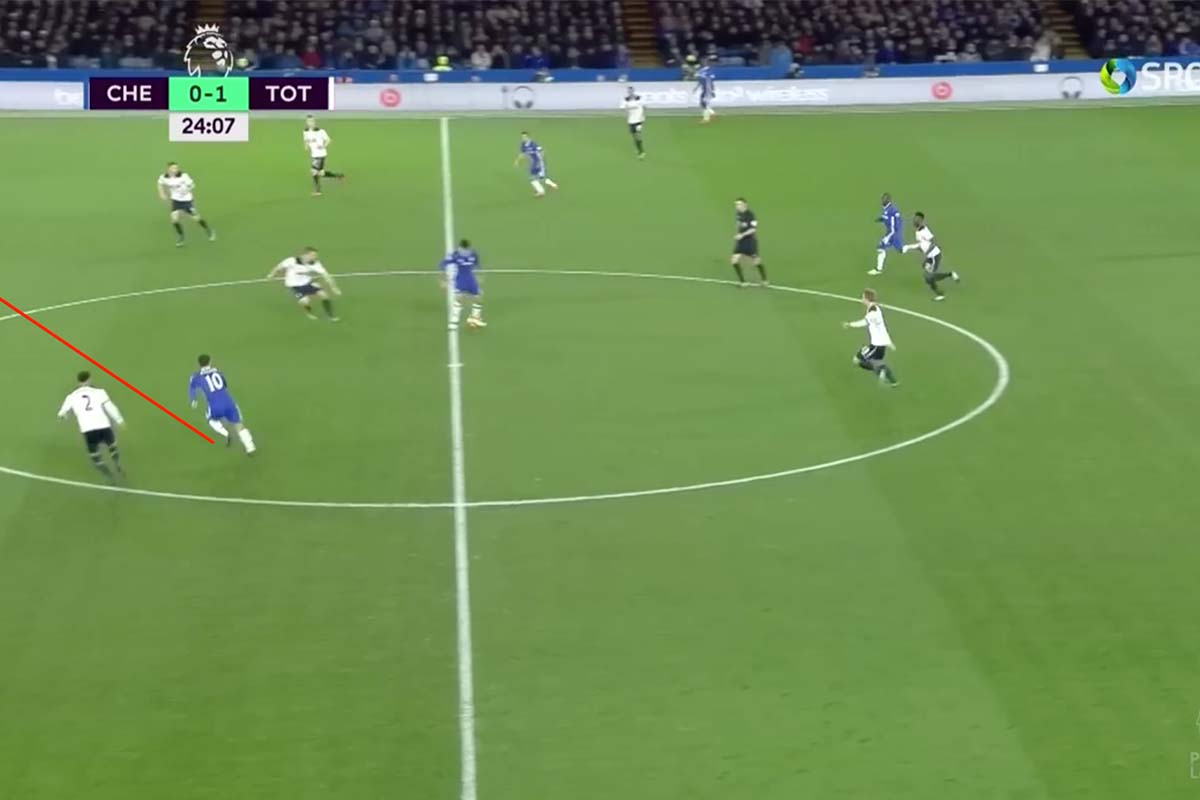 In this image you see Diego Costa on the ball after dropping deep. Eric Dier has tracked the Chelsea number 19 and Eden Hazard is on his bike immediately looking to exploit the space that Dier and Costa have vacated. The Belgian is showing his goal scoring instincts looking to get in behind as opposed to looking for the ball to be played to feet. 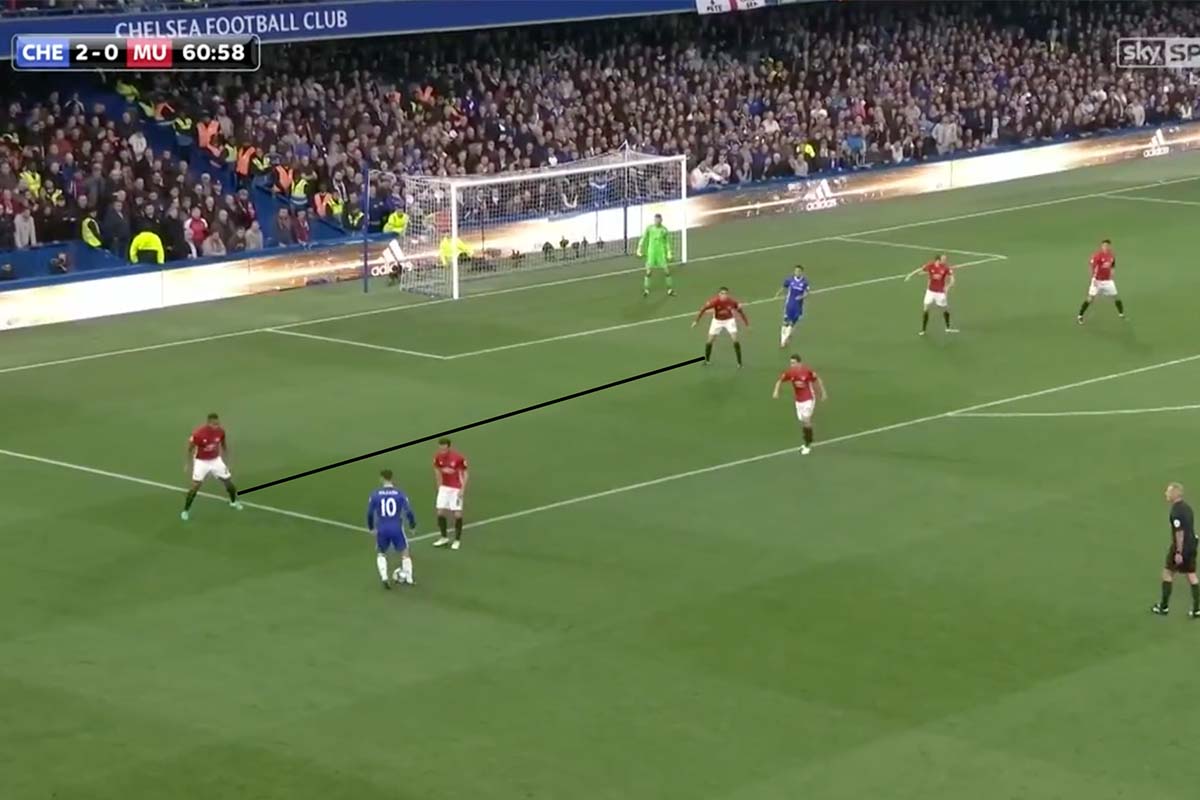 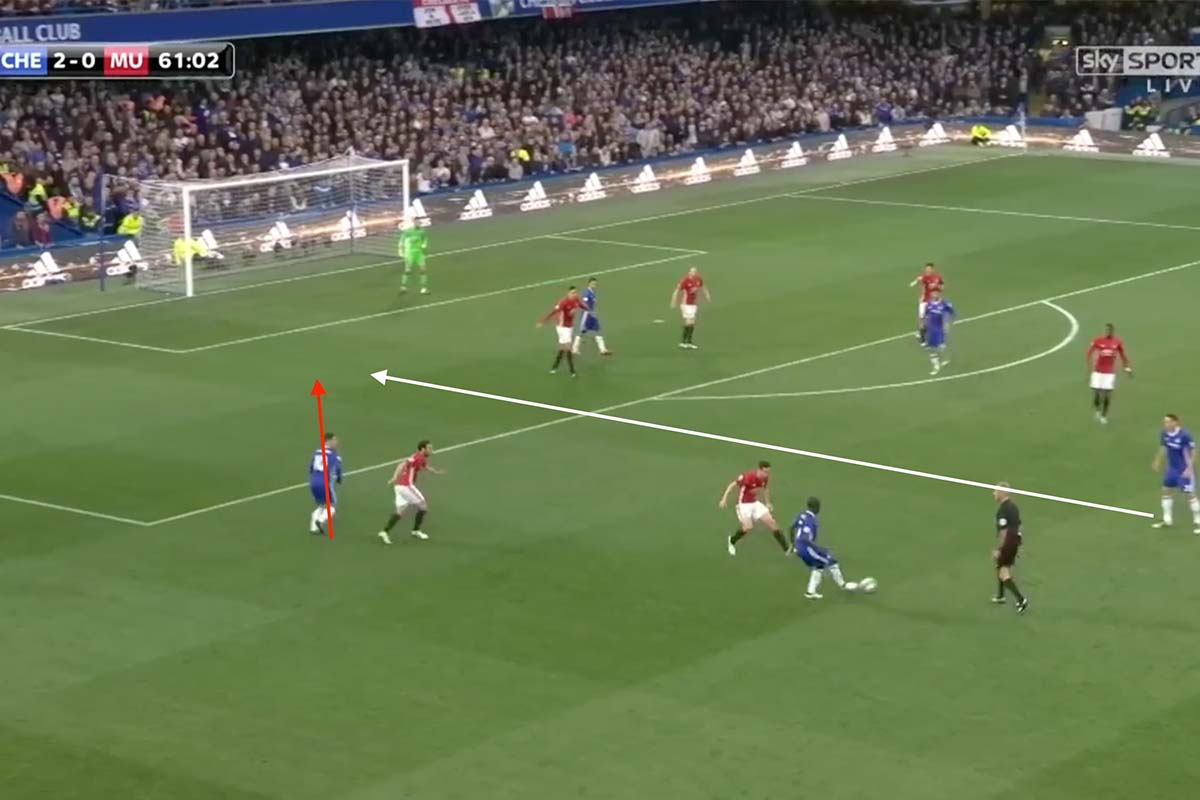 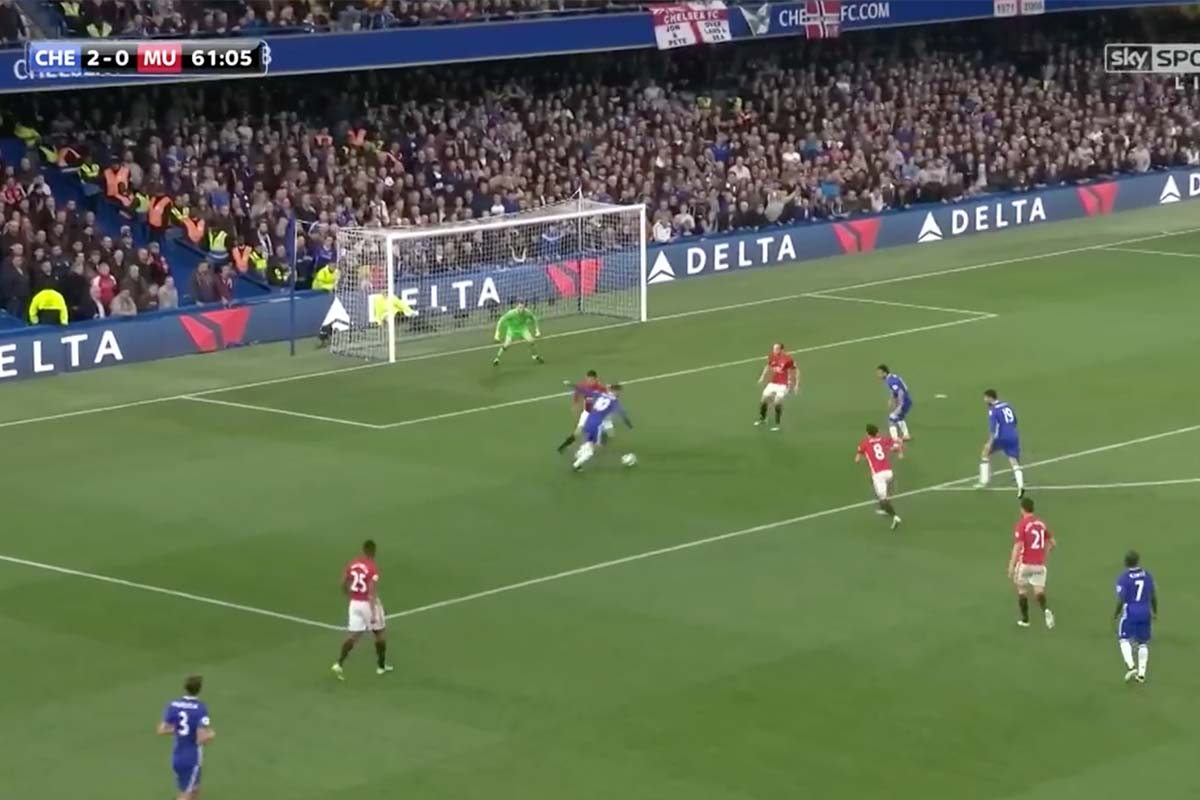 The above three pictures are from the build up to the Chelsea third against Manchester United. In the first picture both Antonio Valencia and Juan Mata are effectively doubling up on Hazard. However, look at the space between Valencia, the right-back, and Chris Smalling, the right sided centre-back. Hazard lays the ball off to N’Golo Kante but doesn’t just hold his position, instead he looks to break forward into the aforementioned space. Valencia doesn’t track him because he’s got eyes on Marcos Alonso and Juan Mata is oblivious to Hazard as he starts to ball watch. Kante plays the pass to Matic who plays a first time pass into the space for Hazard to latch on to. He’s got time and space to cut back onto his favoured right foot and curl the ball home.

Hazard is looking to get into the area and finish off the moves and he’s on target to hit double figures this season. A marked improvement on last year’s return and performances.

Modern day clubs have got into a bad habit of spending money instead of nurturing talent. Somebody like Alessio Romagnoli may be the popular choice but he’s also the most expensive choice and it seems pointless given Conte could call on Christensen and it would cost the club nothing.

Christensen signed for Chelsea on a free transfer from Brondby in 2012 and upon his arrival said he picked Chelsea ahead of Manchester City, Arsenal and Bayern Munich because he liked the way the team played football. If he liked it back then he’s going to love life under Conte.

Currently, Christensen plays as part of a three man defence for Gladbach and has filled in at both centre-back and right of the three. He’s also played at both right centre-back and left centre-back as part of an orthodox back four so his versatility is clear for all to see. He’s a proactive defender and looks to start attacks. On average per match he attempts 69.7 passes and completes 91.4% of them. The highest amount of passes attempted on average by a Chelsea defender (Azpilicueta) is 62.8 and of those 88.7% are successful. These are usually just passes between the defenders and into midfield but it does show he’s used to seeing a lot of the ball and he doesn’t waste it even in a league notorious for teams pressing high. 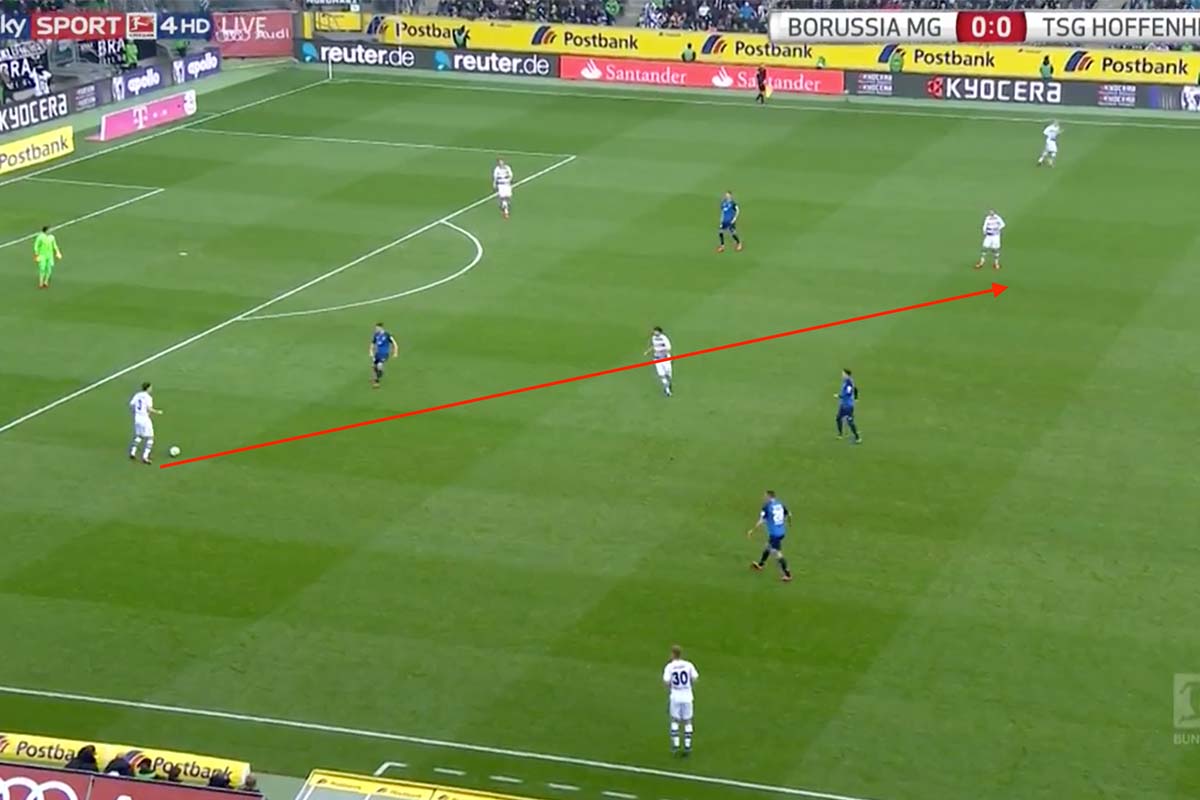 In the picture above you get to see Christensen’s confidence on the ball. He’s in possession and Hoffenheim are pressing. He could play the ball to the man in the middle but there are three Hoffenheim players close by. Instead he misses this man out and plays it to the player with space. It’s not the most taxing of passes but one mistake and Hoffenheim are in a dangerous position with possession. 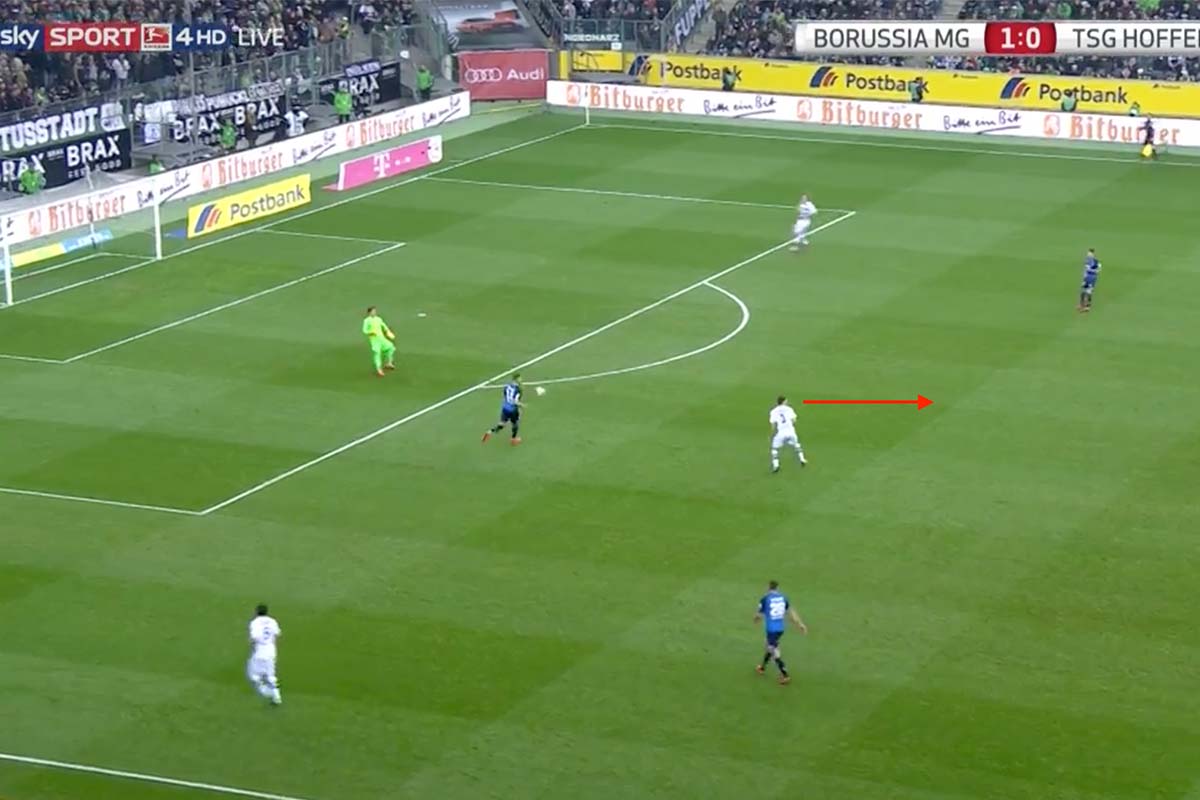 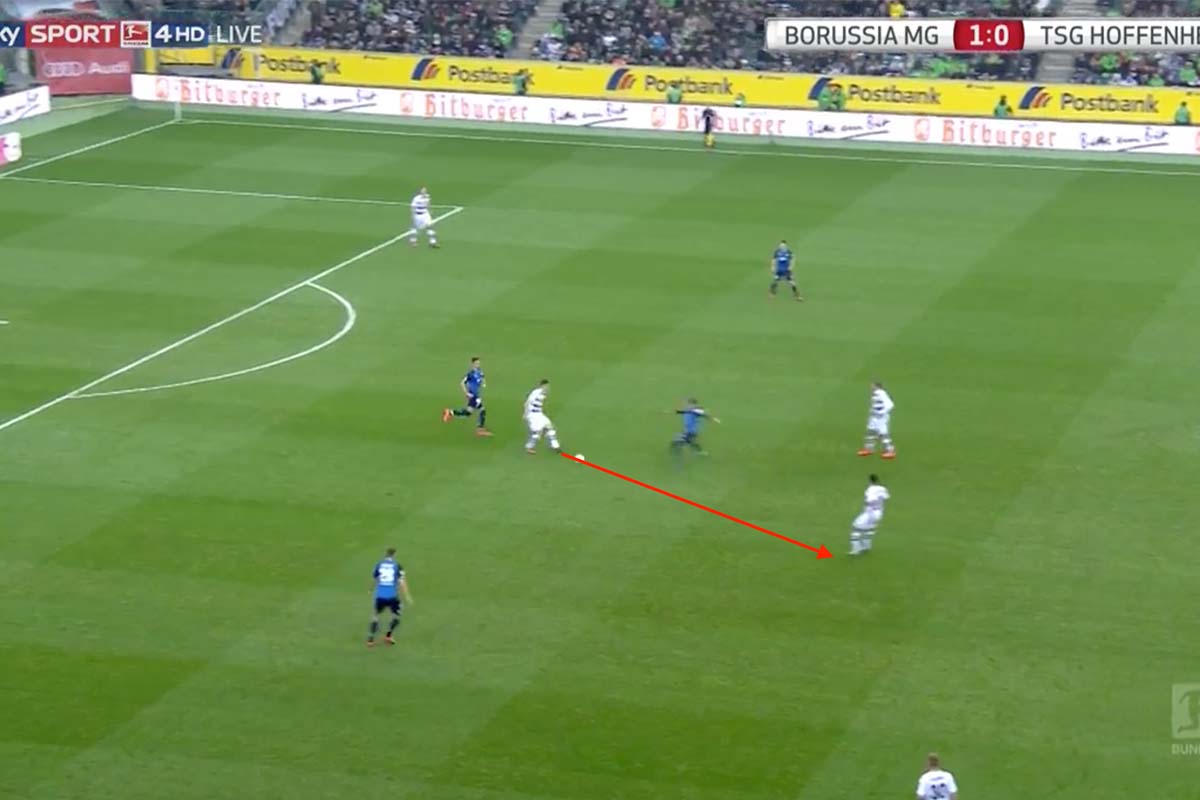 Now you see his composure on the ball. As the ball is being passed out in the first picture you can actually see the centre-back scanning to see what’s around him. He know’s he can take a touch and steady himself before playing the pass in the second picture. He doesn’t just hoof the ball when under pressure. The pass in this scenario takes four Hoffenheim players out of the game. 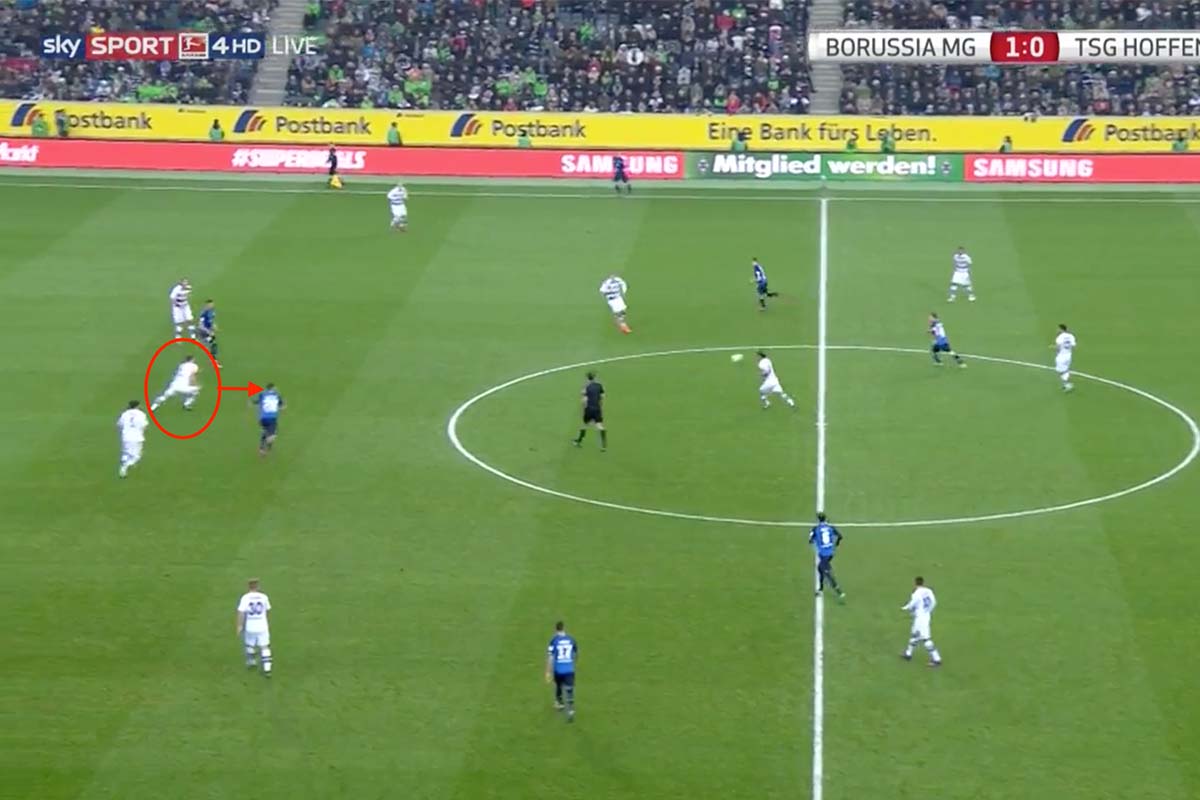 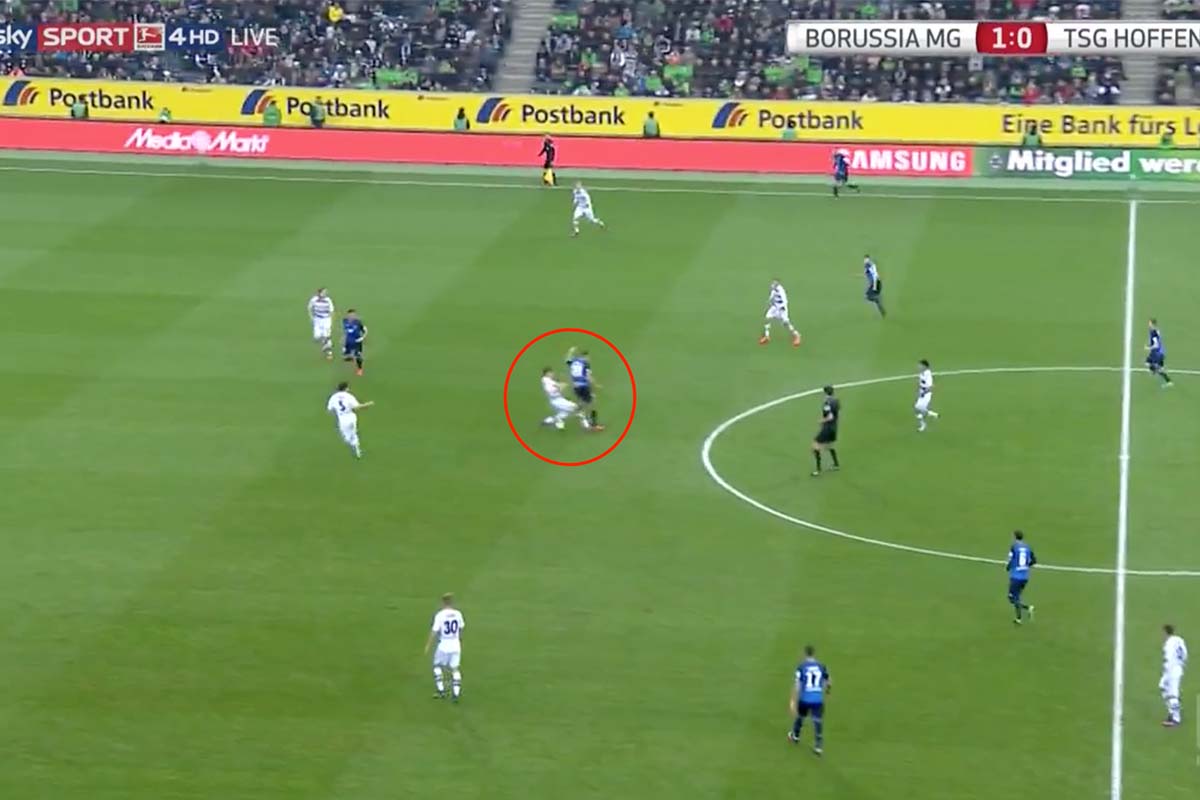 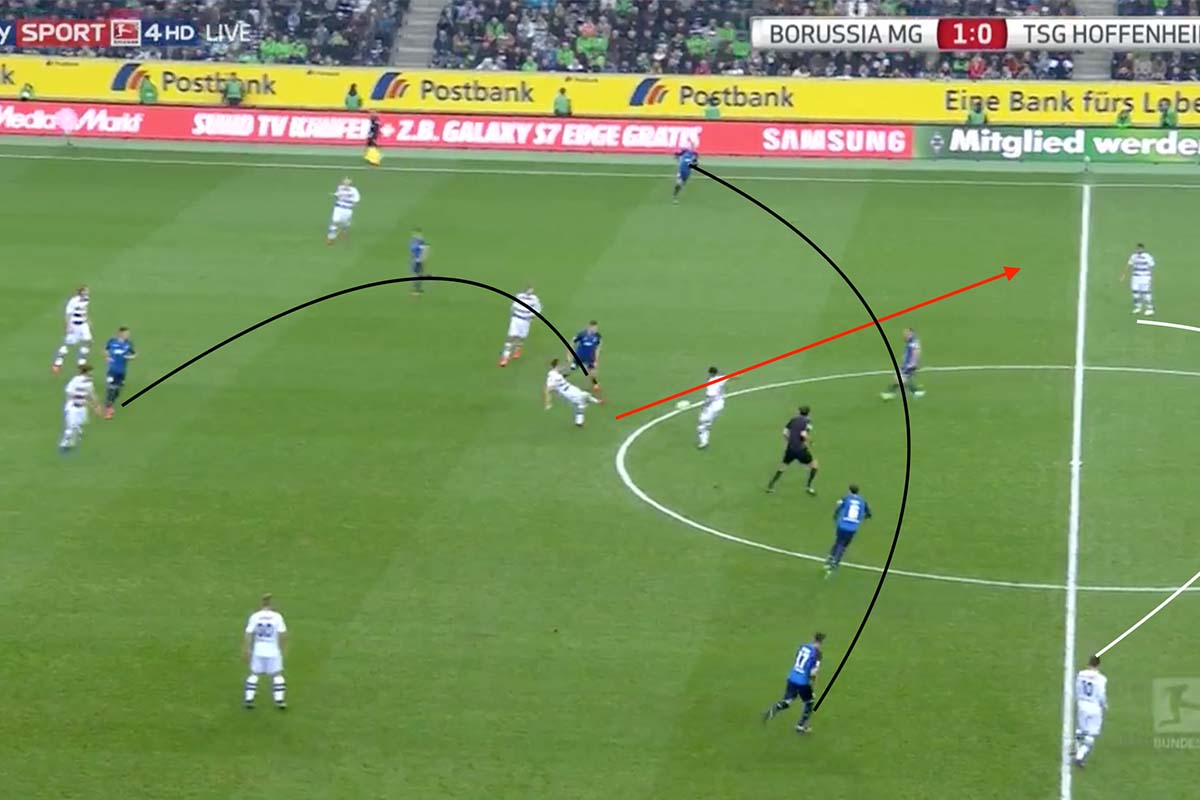 In the three pictures above you get to see Christensen’s proactive approach. He anticipates the ball to the feet of the Hoffenheim player and intercepts. Not only does he regain possession he also starts an attack. It’s not just a simple pass though. Hoffenheim had committed men forward and because of Christensen’s interception and pass forward through the midfield line, it takes 7 opposition players out of the game and puts Gladbach 3 vs 3 in attack with the whole of the oppositions half to run into.

Why should Chelsea spend money when they have a player already at the club capable of not just filling the role but excelling there? It’s spending for the sake of spending when they already have a £30 million player with an abundance of potential that they could call their own. Conte is used to shrewd business having spent time with Juventus and bringing Christensen back could be the shrewdest business Chelsea undertake in a long time.

Is Maxime Gonalons the Man to Give Everton Balance?