For several years now, Ajax captain Davy Klaassen has been linked with a move to the Premier League.

In the past, both Liverpool and Manchester United have been mentioned as potential suitors for the 23-year-old midfielder.

But Football Whispers have it on good authority that Tottenham Hotspur will look to sign Klaassen this summer, and our Index currently rates White Hart Lane as the player’s most likely destination should he decide to leave Amsterdam with a score of 1.9 out of five.

With his current contract running until June 2019, by the time the summer transfer window comes around he will only have two years left on his deal. That is usually the point at which a club decides whether to retain a player by offering them improved terms, or cash in while their value is still high.

Klaassen in believed to be earning around £18,000 per week at Ajax, a figure which Spurs could treble without breaking their wage structure.

And in terms of transfer fee, the 11-cap Dutch international is valued at an estimated £12.75million by transfermarkt.com, but, in reality, the North Londoners would likely have to stump up around £20-25million in order to convince Ajax to part with their skipper – still a relative bargain for a player of his calibre in the current market. 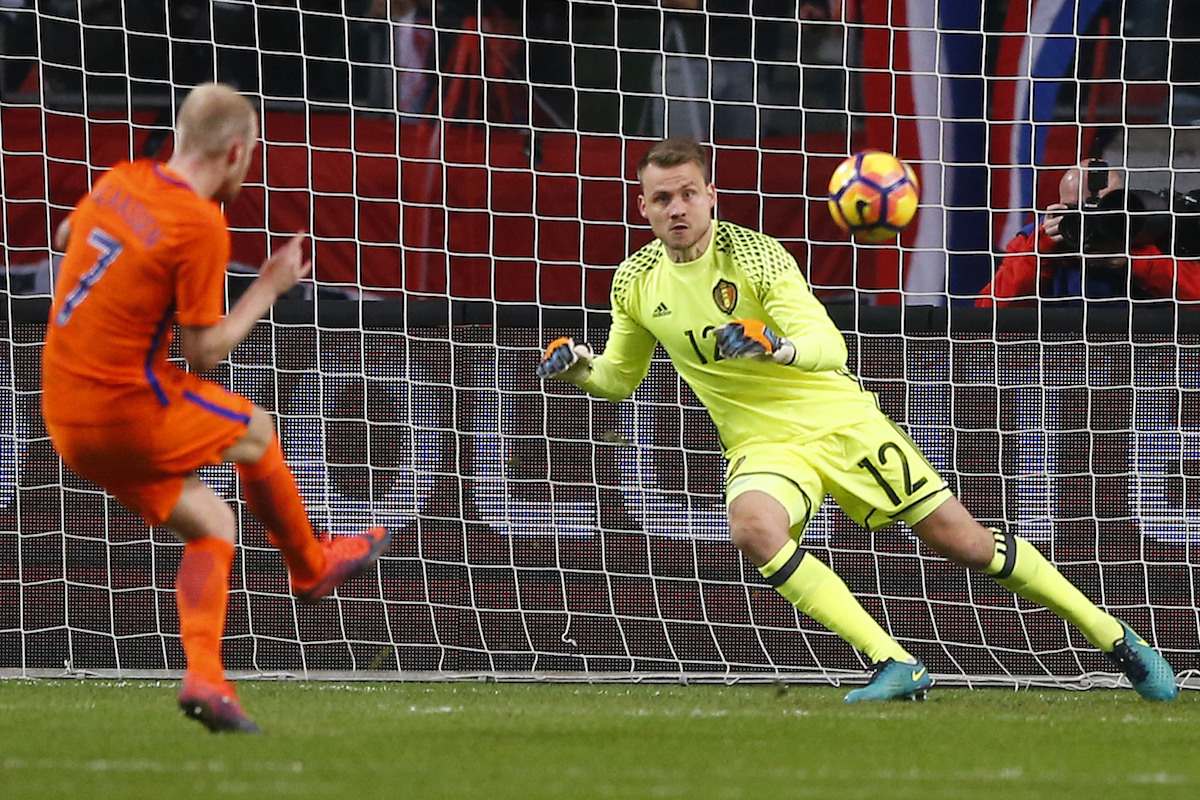 Another important factor to consider is the history of dealings between the two clubs, as the smooth negotiations over Christian Eriksen’s switch from Ajax to Spurs in 2013 will stand the Premier League club in good stead when making their approach for Klaassen. Likewise with the capture of Jan Vertonghen in 2012.

And, aside from the likely bumper payday, the fact that Tottenham can already count former Ajax players Vertonghen, Eriksen and Toby Alderweireld among their number would help ease the player’s transition to life in England, both on and off the pitch.

Highly-rated in his homeland, Klaassen is far from a household name elsewhere in Europe, although his performances for Ajax have steadily raised interest in the Hilversum-born player.

So if Klaassen were to join Spurs, where would he fit in and what would he offer?

Having joined Ajax’s famed youth academy in 2004, Klaassen was earmarked as a young player with huge potential from a very early age, and was capped for the Netherlands at every youth level before making his senior Oranje debut in 2014.

While playing for the Amsterdam club’s youth team, Klaassen led his side to the Nike Eredivisie title in 2012 as well as helping the team reach the final of the Next Gen series – the junior equivalent of the Champions League – where they fell to defeat against Inter Milan on penalties. 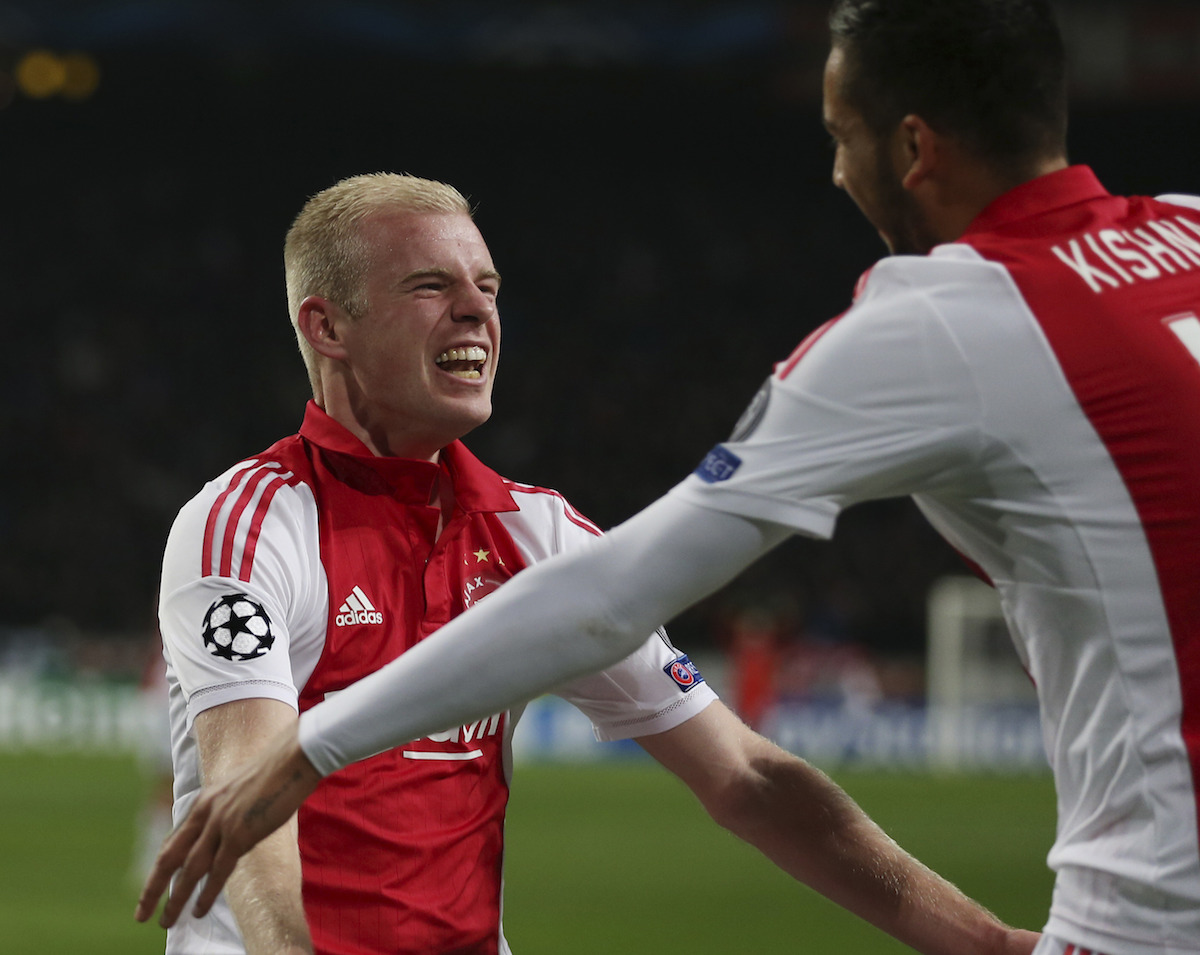 A senior Ajax debut came in 2011 and he has since gone on to make over 150 appearances for the club with an impressive average of roughly a goal every three games.

Capable of playing as a deep-lying playmaker, a box-to-box midfielder or higher up as a No.10, Klaassen’s versatility makes him a prized asset.

Speaking in 2015, he told FIFA.com of how Ajax assistant manager Dennis Bergkamp has helped him develop his skills as a more advanced midfielder.

“Bergkamp played in the same sort of position,” Klaassen said. “I’ve trained a lot with him on my first touch and finishing. He’s a player I liked when I was young. I think I’ve learned the most from him.”

Having demonstrated his ability to act as a leader and on-field lieutenant for the manager, former Ajax boss Frank de Boer made Klaassen club captain ahead of the 2015-16 season following the departure of Niklas Moisander.

A cool finisher inside the penalty area and able to time forward runs perfectly to open up scoring chances, Klaassen in a real goal threat. This season alone he has bagged nine goals in 19 outings for Ajax.

His 50 percent shot accuracy is better than that of Dele Alli (41.7 percent), Christian Eriksen (36.7 percent) and Mousa Dembele (10 percent) – all of whom would be potential positional rivals if he were to move to White Hart lane. 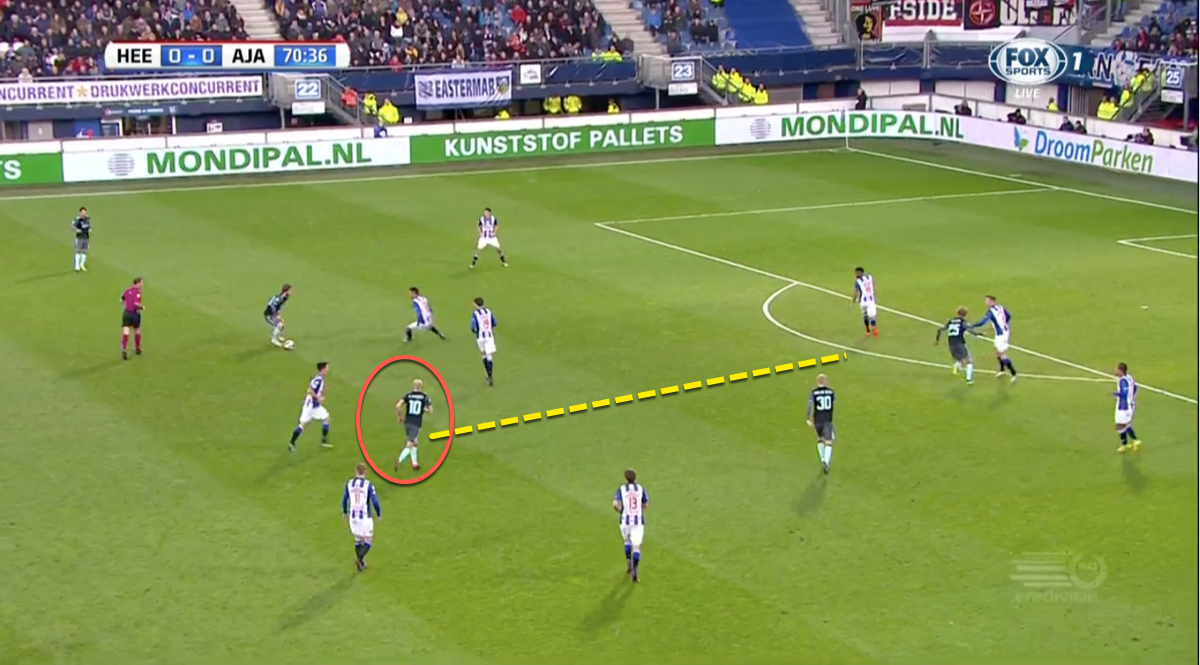 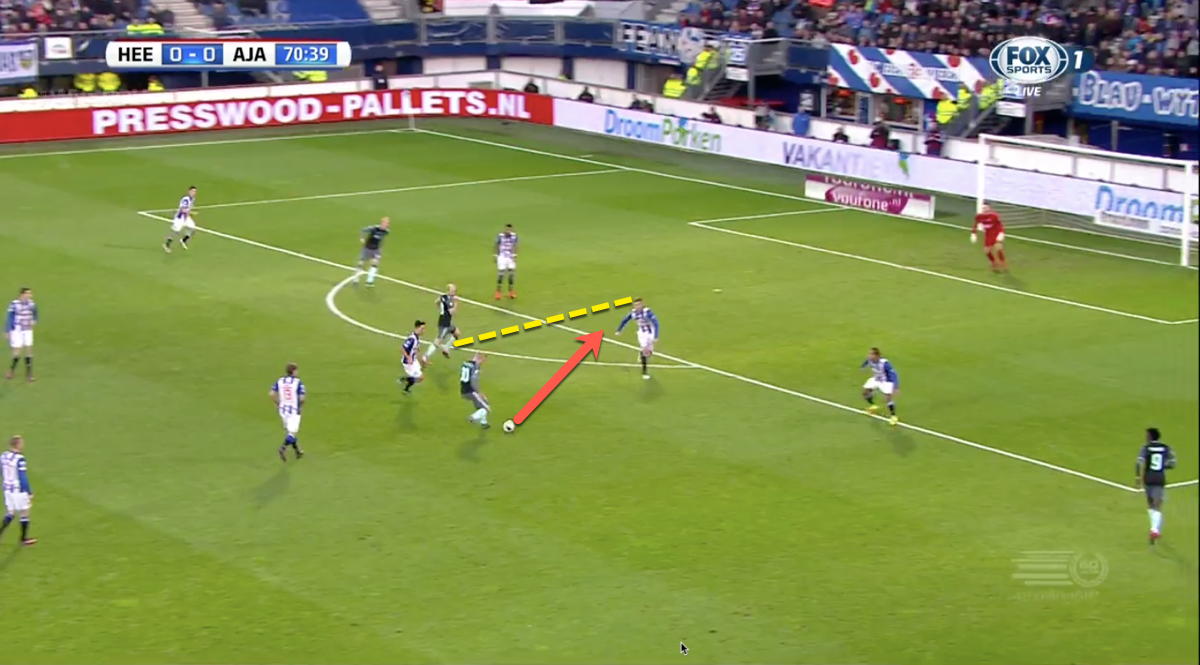 Klaassen is also adept at creating chances for team-mates, blessed with a keen eye for a killer pass that has seen him conjure 38 scoring opportunities for colleagues this term. That's more than Dembele (14), lightly short of Alli (40), but still some way off the creative powers of former Ajax playmaker Eriksen (82).

Comfortable on the ball and a safe pair of hands in possession, Klaassen has picked out a red and white shirt with 79.3 percent of his passes in the Eredivisie this season, a comparable average to Alli (79.4 percent) and Eriksen (80.2 percent), but trailing the impressively accurate Dembele (90.9 percent). 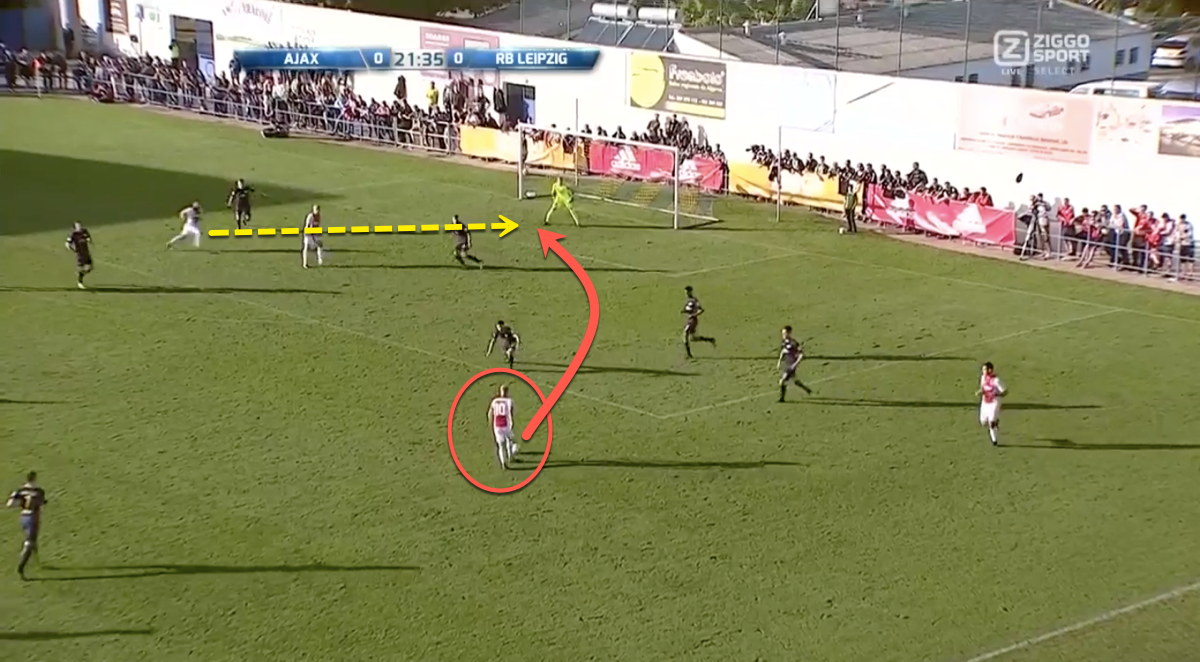 The Dutchman’s work-ethic and willingness to take responsibility for organising his side in the centre of the park will have undoubtedly caught Mauricio Pochettino’s eye. The Spurs boss demands that his players press tirelessly for 90 minutes, while Klaassen’s tactical awareness will suit the Argentinian boss perfectly as he often makes changes to the team’s formation within a game.

Klaassen is not especially fast, although, in his position, this isn’t too much of an issue. He is still able to hold off and break away from opponents by using his physical strength and close control. 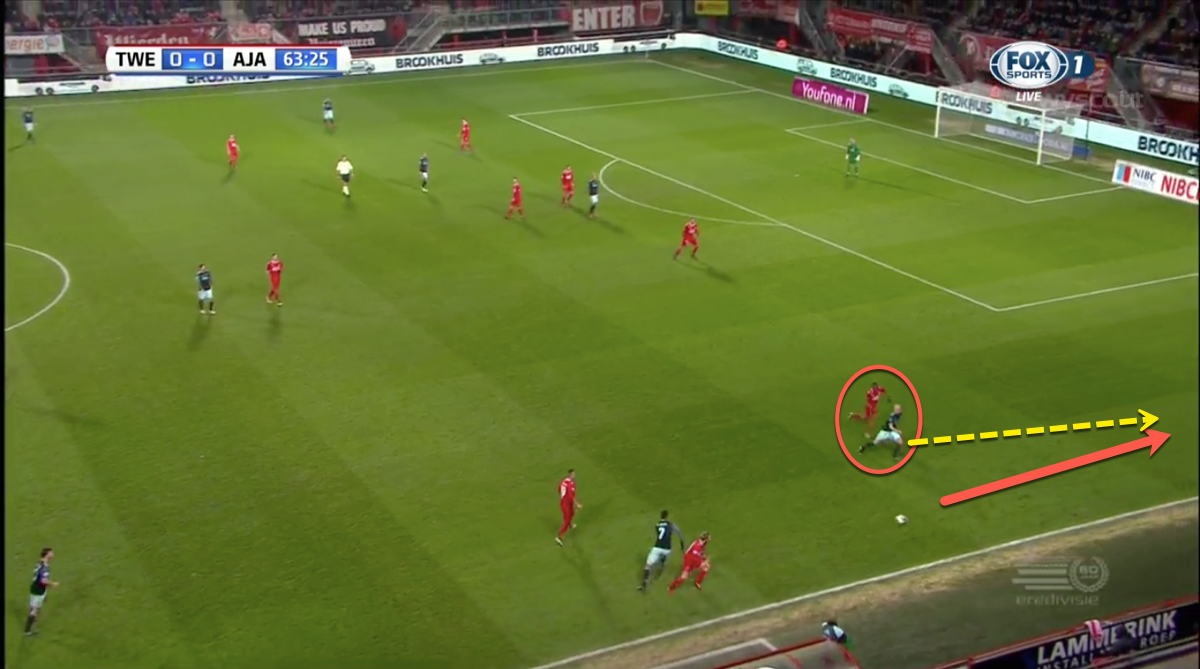 When deployed in a deep central midfield role, he is not particularly adept at shielding the back four and breaking up play in the way that Victor Wanyama has done so expertly for Spurs this season. If he is playing at the base of midfield, he is there to conduct play rather than to stifle the opposition.

That being said, Klaasen is dribbled past less frequently (0.6 times per game) than Alli (1.2) and Eriksen (1.5), while midfield powerhouse Dembele matches his average. He also makes fewer tackles per game (1.8), than the Belgian (2.8).

A good fit for Spurs?

With his ability to play in a variety of central midfield roles, Klaassen would be an astute signing for Spurs.

Whether he has the quality to oust the likes of Dembele and Alli from their starting berths remains to be seen, but his versatility and adaptability would make him an able deputy to both, while Pochettino’s propensity to switch formations – which has been especially prevalent this season – would see Klaassen receive plenty of game time.

With a style that seems ready-made for the Premier League, Klaassen could flourish at White Hart Lane.

Keep up to date with all of the latest deadline day news with Transfer Live!