There are some things in life that are difficult to understand. They defy logic and go against the grain. How Leicester City won the Premier League, how someone can solve a Rubik’s cube with one hand and how Adam Lallana turned into one of the most potent threats in the Premier League despite being withdrawn from an attacking position.

The latter may not be in the realms of the former two in terms of unexplained mysteries but Lallana’s 2016/17 form is a bit of a head scratcher. He has seven goals and the same amount of assists to his name. He’s equalled his best output for a season and there’s still 13 matches to play in the Premier League.

It’s going to be a record breaking season for the 28 year old.

It’s arrived the very same season he went from starting as an attacking midfielder to being deployed in a box-to-box role. In theory the fact he has more defensive responsibilities should mean he’s less of a goal threat but if anything his new starting position has had a positive impact because he’s involved in more central areas.

It was the perfect storm for the former Saint and he’s made the most of it with a series of impressive performances earlier on in the season. It was only after Sadio Mané had to leave for the Africa Cup of Nations that he had to return to a more attacking role which the Lallana of old reared his ugly head.

He went from devastating to frustrating.

It wasn't until Mané returned and Gini Wijnaldum was restored to the starting eleven alongside Lallana and Jordan Henderson against Spurs that the Liverpool No.20 resembled his early season self.

Lallana in attack compared to Lallana in midfield really is chalk and cheese. He's a completely different player when he's starting in a withdrawn role.

The mastermind behind the decision is of course Jurgen Klopp. The former Borussia Dortmund manager was asked about his thought process behind  the role change earlier on in the season.

“It made sense because he’s very good in small spaces,

“He’s a very quick player but his biggest strength is not being quick, it’s his decision-making in small spaces.

“He can open the game for you in one-on-one situations and everybody would have pressure, he doesn’t have because his movements are quick. He has a wonderful orientation and needed to adapt a little bit, remember against Arsenal, he lost the ball…it’s all about orientation.

“He has all the technical abilities for playing there.” 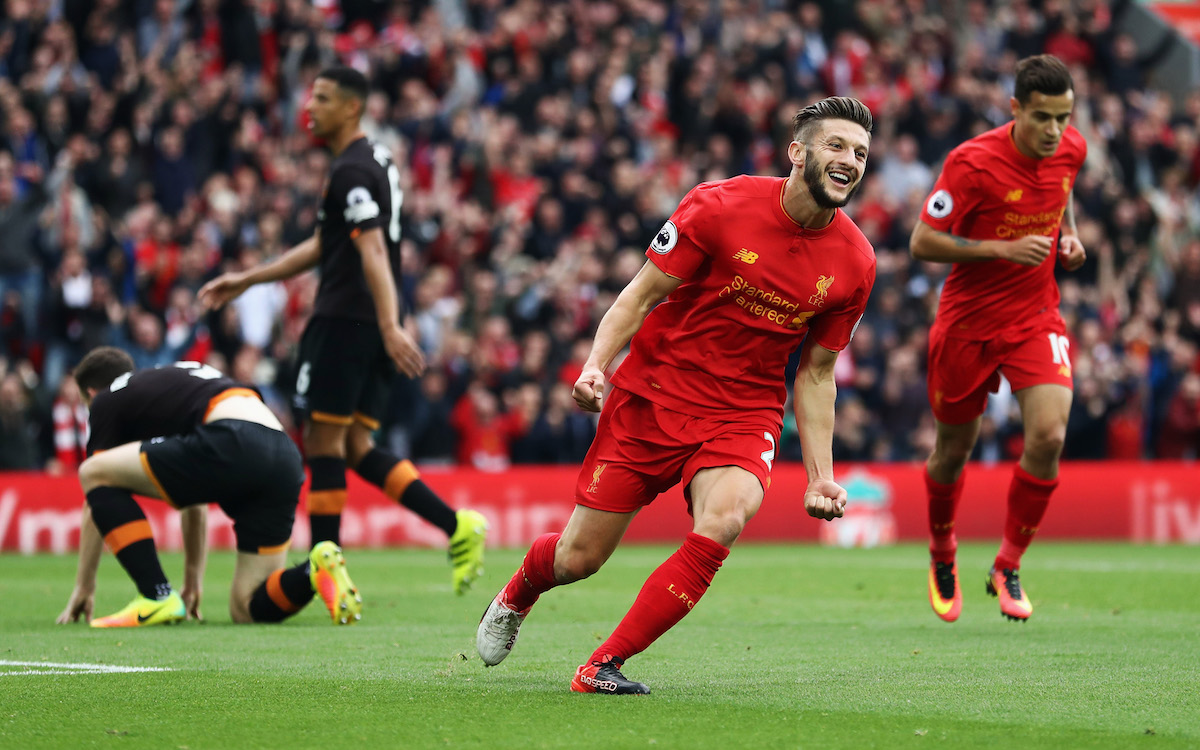 When looking at the bigger picture it makes perfect sense. Lallana is one of the best two footed players in world football right now. He's comfortable taking the ball on either foot so having him start in a central position immediately puts the opposition at a disadvantage.

They can't show him onto a ‘weaker foot'.

Coupled with this is how the Reds now have more players around the playmaker for him to pick out with passes. In years gone by he's been accused of taking too long on the ball but with more players around him his circulation seems to be a lot faster. You see this in his stats.

Last season he was averaging 33 passes per 90 minutes and maintained an average pass completion throughout of 82.4 per cent. This season so far he's attempting 44.5 passes per match and completing 84.5 per cent of them.

More passes but a better completion rate. It tells its own story.

Of course, Liverpool have adopted a more possession orientated approach, so an increase in passes attempted is to be expected, but Lallana is able to execute them because of the support he has around him starting in that deeper role. 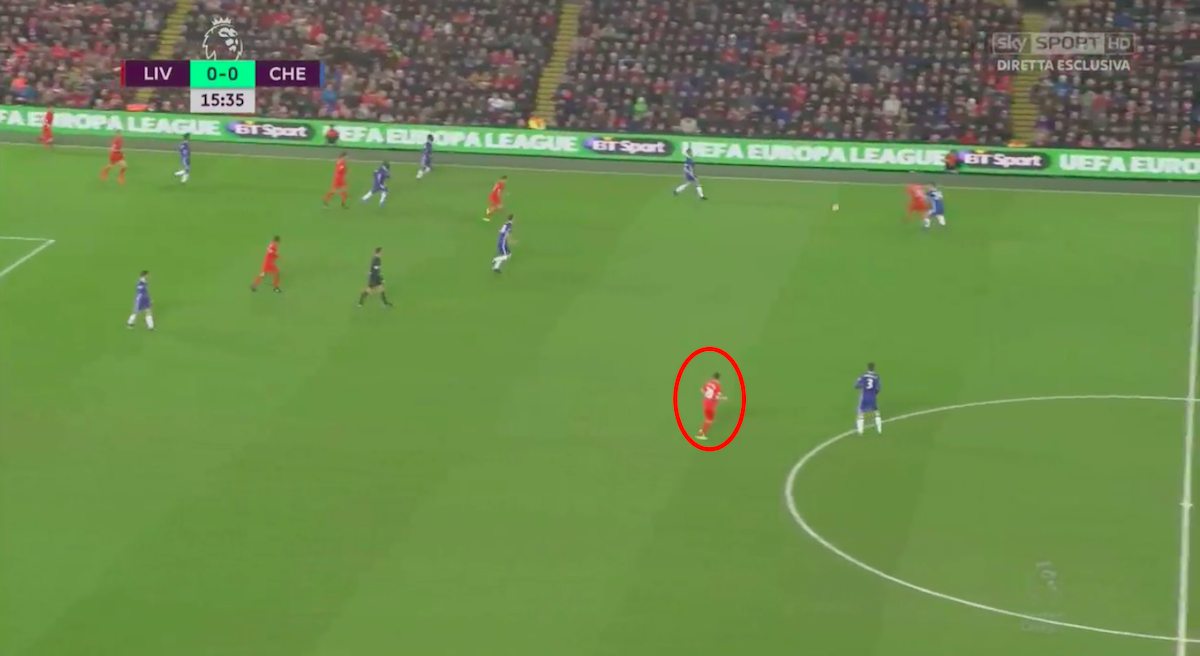 In the picture above, taken during Liverpool's 1-1 draw with Chelsea, you see Lallana circled in a central area. In this match he started on the right of an attacking three. His position here is fine.

The play is on the Liverpool left so he's drifted in field to support the play and leave space down the right for Nathaniel Clyne to attack if the opportunity presents itself. 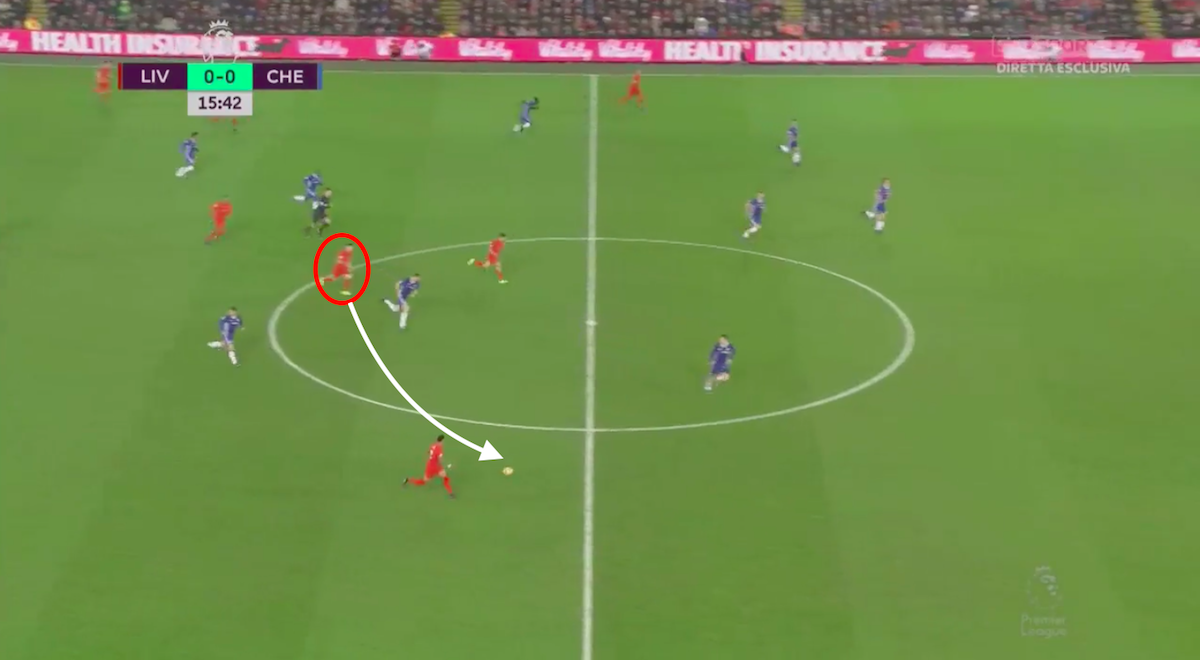 The ball is worked to Lallana who then turns on the ball and plays a ball into the space for Clyne to attack.

Clyne is the right-back, he's the width down that flank yet he's in a pretty central area, he's going to need to support if the attack is going to progress. Ideally it would be an overlap. 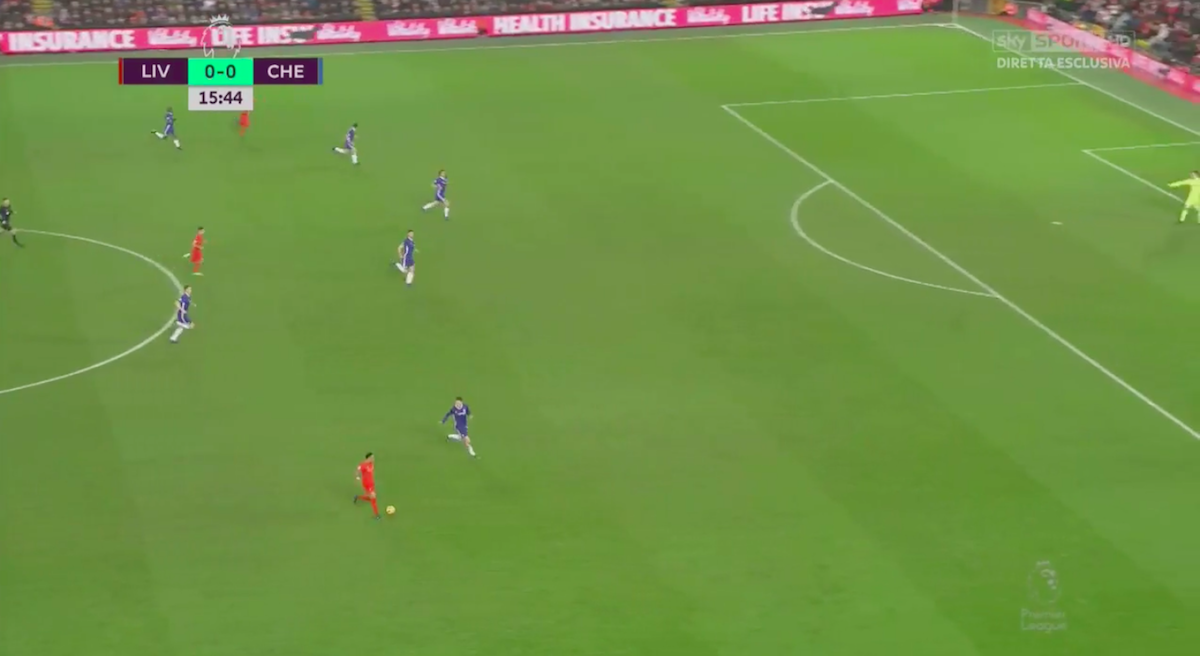 He carries the ball forward and he's isolated one on one with Marcos Alonso. The closest Liverpool players are to his left and there's no easy pass on. Lallana hasn't made up the ground on the right and isn't even in shot as Clyne has to slow his attacking progress so not to gift Chelsea possession. 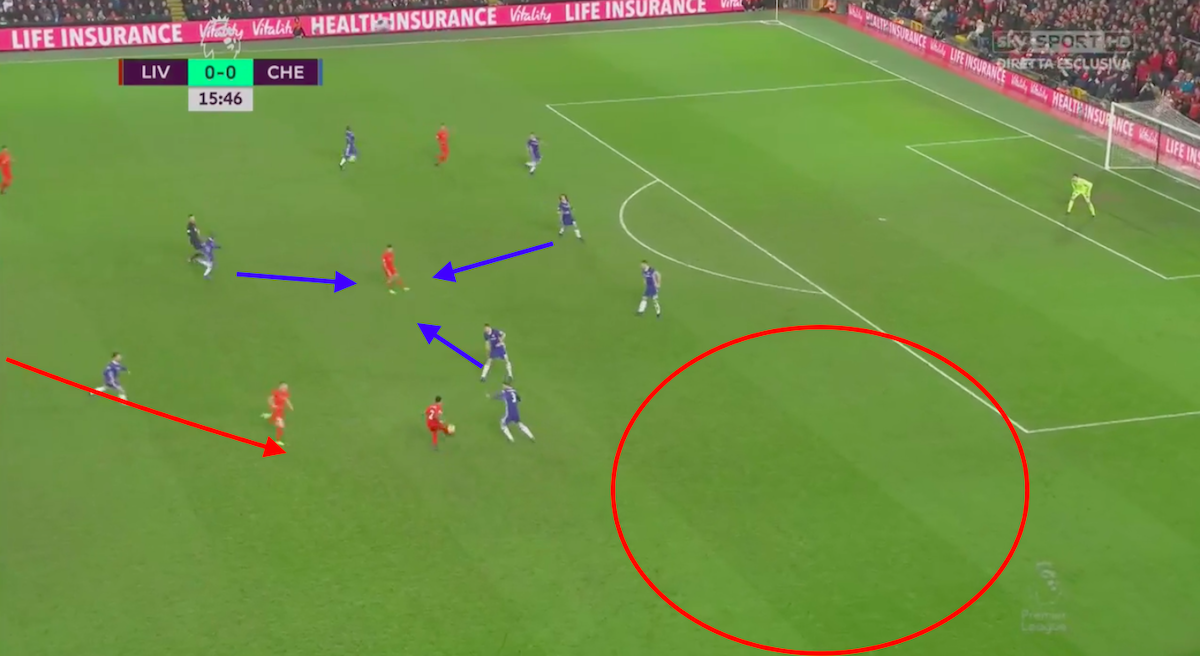 Lallana belatedly appears to support Clyne but it's after the attack has petered out. Chelsea have men back and the pass being attempted by the right-back is easily managed by those in blue. Look at the space, circled in red, that could have been utilised had Lallana but it's not natural to him and he doesn't have the electric pace that Mané possesses.

He can't be blamed for not being Mané but from these pictures it's clear why the attack doesn't function as seamlessly with Lallana there in place of the Senegalese attacker. 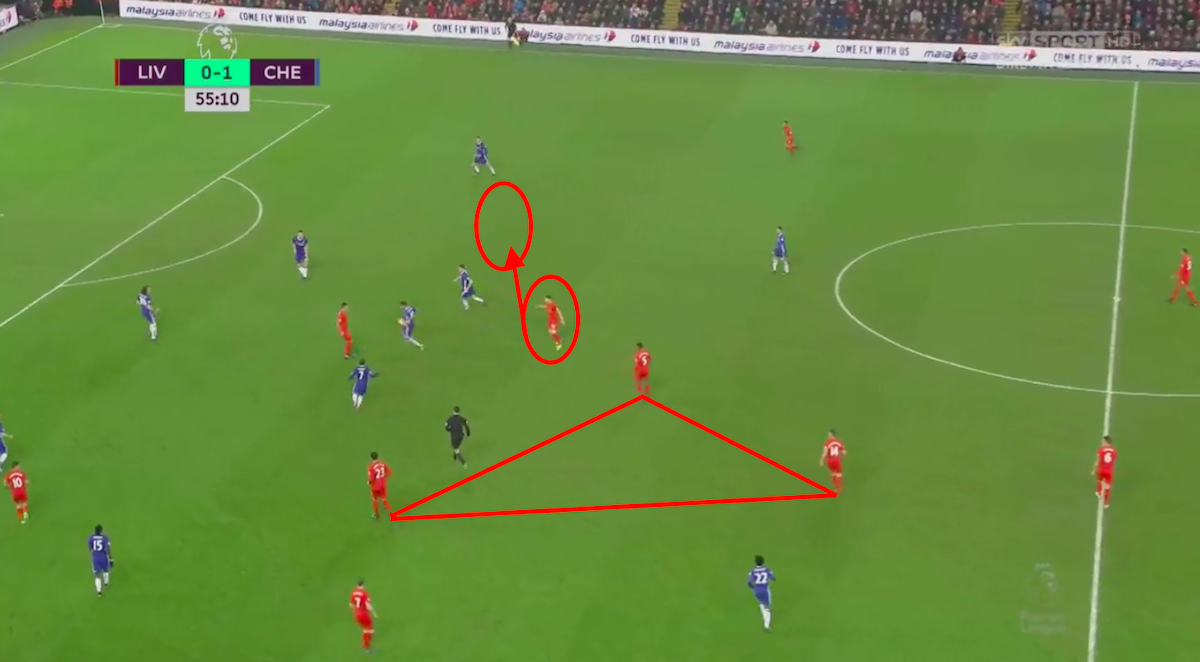 Lallana is circled in a central area and the three man Liverpool midfield is shown by a triangle. He plays the pass to Firmino and instead of looking to join the attack and pushing on to the area circled in red, which would allow Wijnaldum to push into the area the former Saints captain is in, he holds his position and stunts everything.

Firmino loses the ball and Chelsea are able to play out down their left with Lallana not being wide enough to make it difficult for them. His tendency to drift into central areas causes issues when he's supposed to be one of the outside attackers. 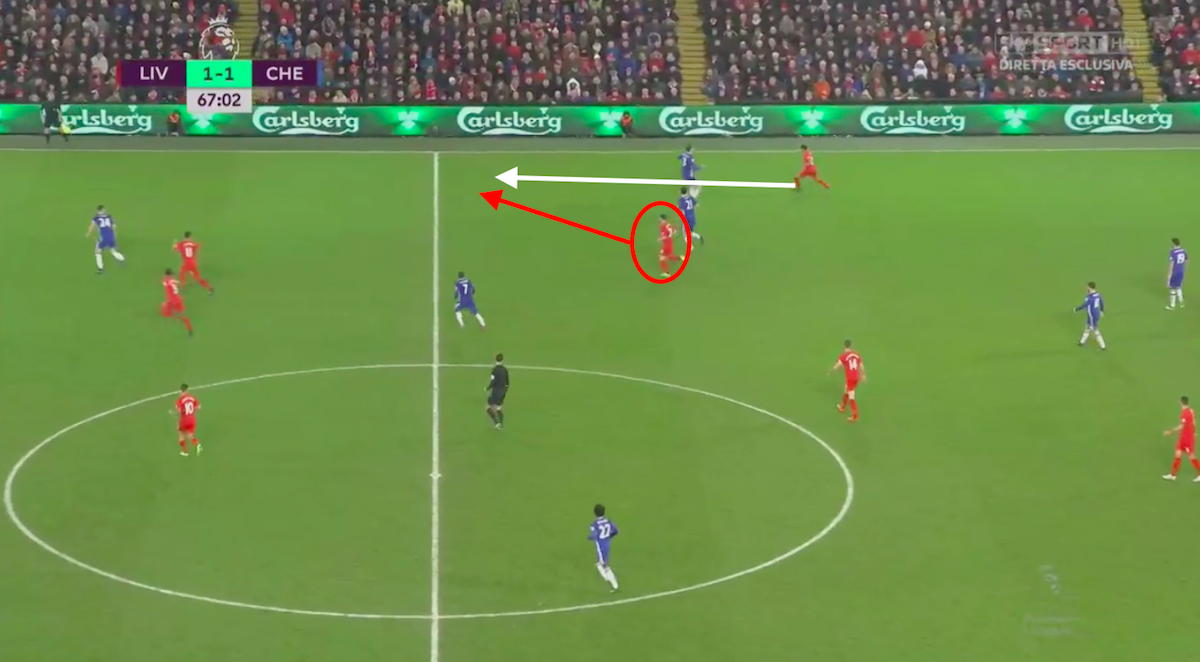 Liverpool have Coutinho, Wijnaldum and Firmino in behind the Chelsea midfield. Clyne is in possession but he's being pressed and there's no easy pass to any of the aforementioned three. He lofts the ball down the right and it's easily dealt with.

However, had Lallana just pushed into the space behind the two men closest to Clyne, the full-back could have clipped the ball into the space and the Reds would be on the break with men over.

Clyne's pass no doubt could have been better but the lack of movement from Lallana forced his hand in many ways. 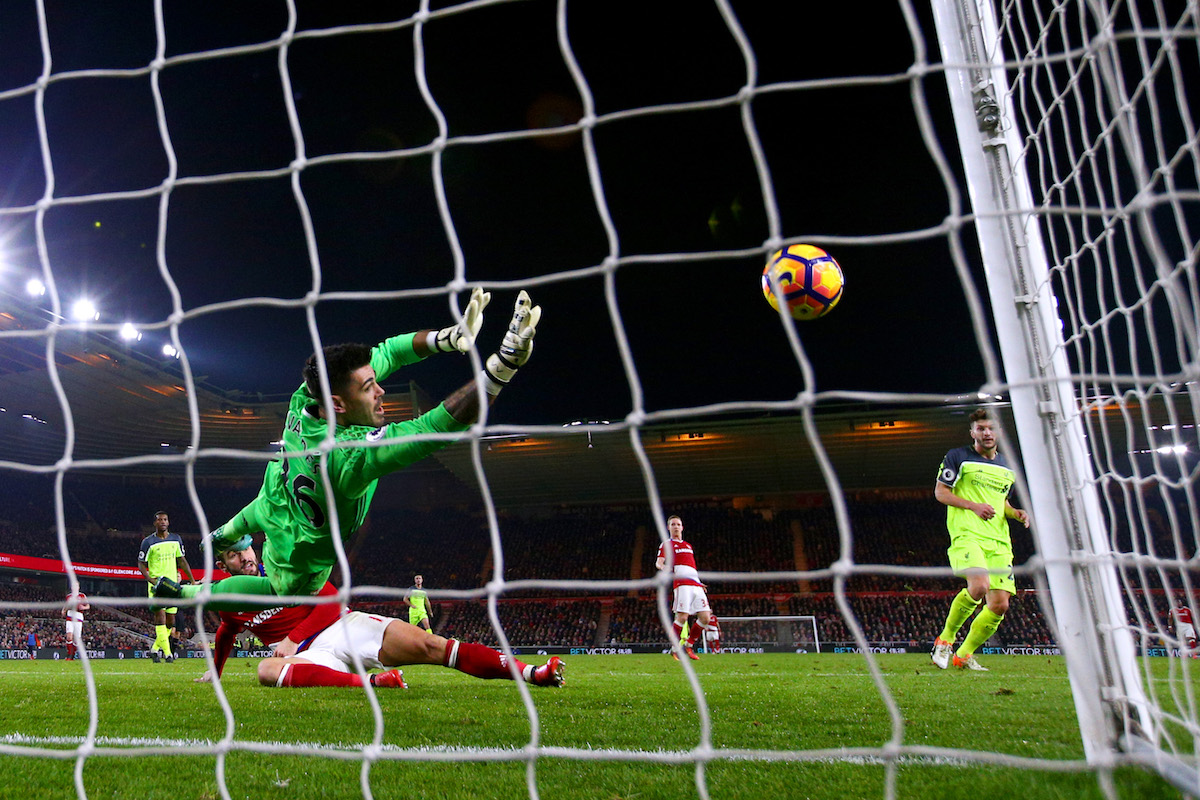 These are just three examples of why Liverpool look one disjointed and a little pedestrian with Lallana on the right of that attacking three. If Klopp wants to bring success to Anfield he needs to keep key players in their best positions and right now Lallana is one of them. He needs to play in that central role so Liverpool need to bring in a player to cover to Mané to facilitate this.