The rise of Moussa Dembélé over the last year has been phenomenal. Inside one season, he has gone from Championship prospect to multi-million pound transfer target for the likes of Manchester United, Chelsea and Tottenham Hotspur. And his next move could see him playing for one of Europe’s most prestigious and historically successful clubs.

Having already confirmed the arrivals of centre-back Mateo Musacchio and central midfielder Franck Kessié from Villarreal and Atalanta respectively, AC Milan’s summer rejuvenation is off to a fast start. They seem intent on landing a striker in their next move, and Celtic’s 20-year-old hitman has emerged as an option for the Italian giants.

On Sunday afternoon, Sky Sports reported that: “AC Milan are in talks to sign Celtic striker Moussa Dembélé according to Sky sources. Borussia Dortmund and Chelsea are also understood to be interested in the French striker but it is the 18-time Italian champions who have made the first move.” 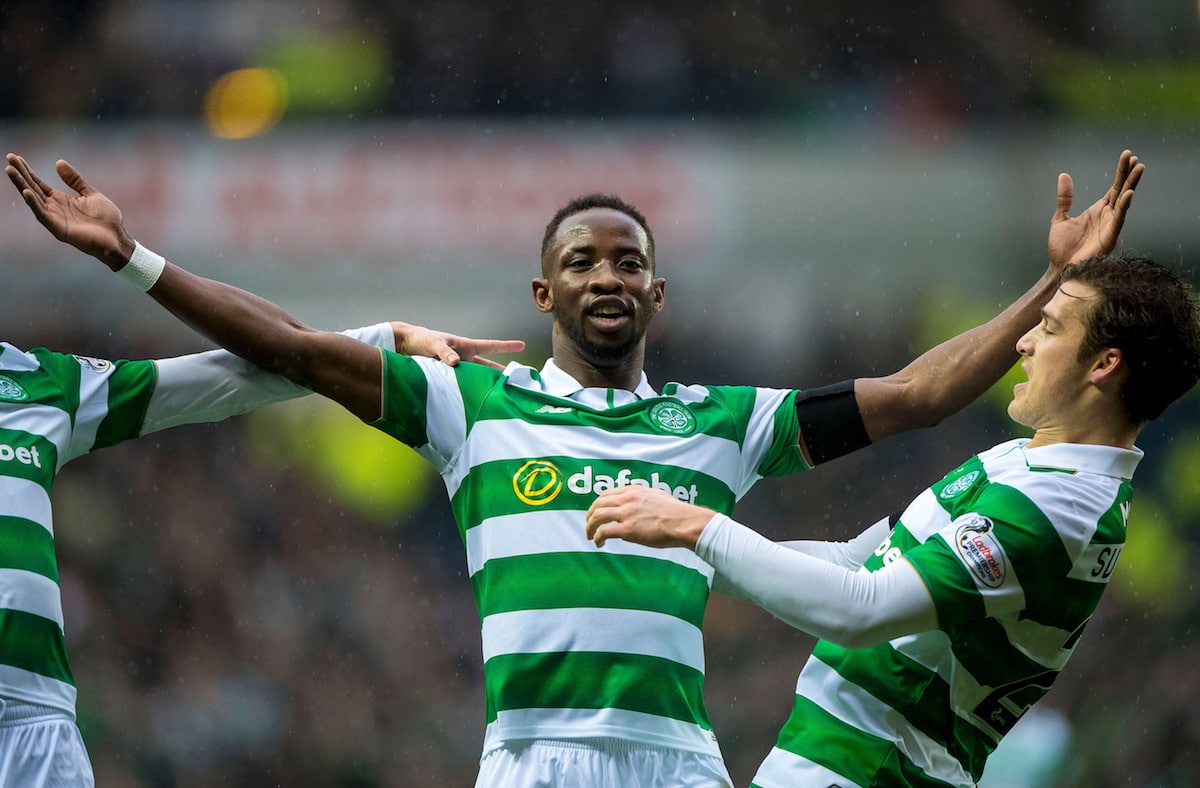 After a strong breakout campaign in the Championship in 2015/16 that saw him score 15 goals in 43 league games for Fulham, Dembélé joined Celtic last summer. He continued his good form in the Scottish Premiership, finding the net 17 times from 29 league outings.

All in all, he hit a remarkable 32 goals in all competitions for the reigning Scottish champions, helping fire them to a sixth consecutive title, victory in both cup competitions to seal a treble, and an incredible 47 matches unbeaten on the domestic front.

Essentially ousting Leigh Griffiths to achieve Celtic’s No.1 striker status, Dembélé was an immediate hit with the fans, scoring a hat-trick in his first Old Firm Derby—a 5-1 win over Rangers last September. Within months of his arrival, there was serious speculation concerning a potential January departure.

The Frenchman stayed on to the end of the season, but a summer move appears increasingly likely with talk of a big-money switch intensifying. Milan are one of several suitors reportedly coveting the youngster’s signature, and this may be due to the difficult in acquiring their other, possibly preferred targets.

Andrea Belotti was an obvious contender to lead the Rossoneri’s attack as of next season. The Italian scored a stunning 26 goals in Serie A last term and imposed himself upon his national team’s starting ling-up, as well as announcing that his childhood idol was Milan legend Andriy Shevchenko.

However, the 23-year-old has a €100million buyout clause in his contract that is eligible only for foreign clubs, with Torino ensuring a move similar to those made by Juventus last summer – where they paid the release clause’s for Napoli’s Gonzalo Higuaín and Roma’s Miralem Pjanić – could be avoided.

In recent weeks, Real Madrid’s Álvaro Morata appeared as a legitimate alternative to Belotti. The Spaniard has enjoyed a positive season since returning to the Santiago Bernabéu, notching 15 goals in 26 La Liga outings to confirm his class.

However, a growing feeling that the 24-year-old would be playing at the San Siro come 2017/18 was essentially dissolved by the player’s words at the conclusion of the Champions League final, where he told Mediaset Premium:

“No, I certainly won’t be in Italy. I want to continue here and it’s difficult. I can only tell you what I read in the papers, I know nothing else. I like Italy, but I am happy here. Madrid is my team and my city.”

With moves for Belotti and Morata seemingly stunted by lack of financial and personal viability respectively, Dembélé would appear to be the realistic striking option for Milan. Not only will his transfer fee likely be comparatively lower, but his desire to pull on red and black will – theoretically, anyway – be higher. 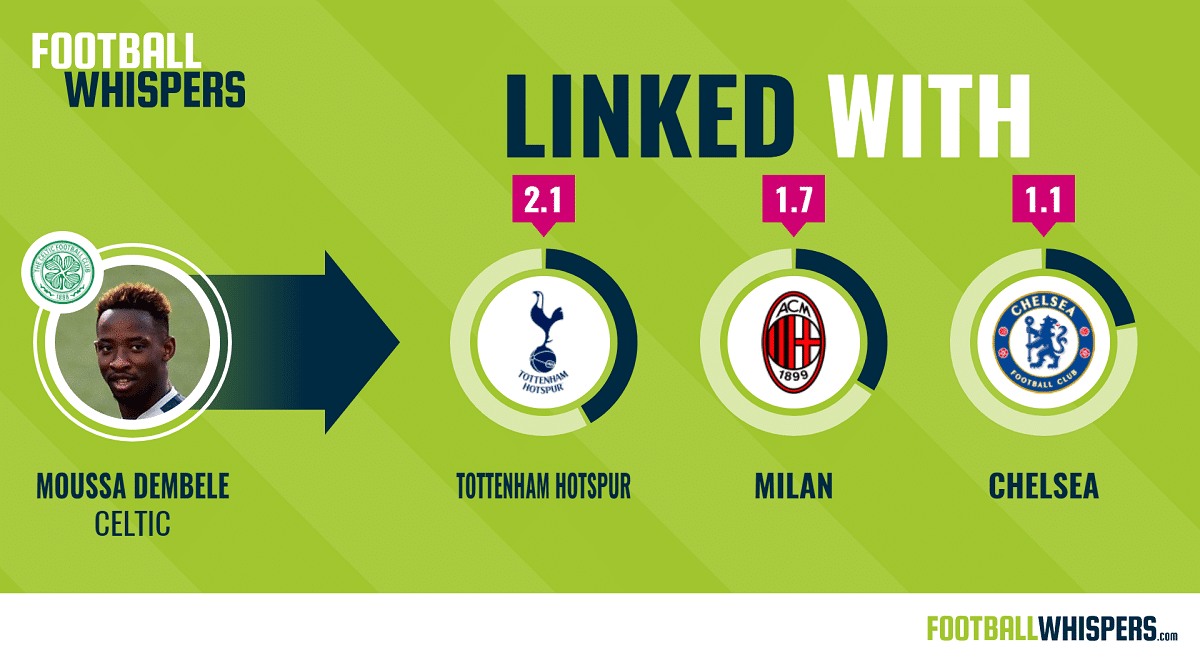 Milan have needed a true, out-and-out centre-forward for several years. It could be argued that they haven’t had one – not a consistent one, at least – since Zlatan Ibrahimović left for Paris Saint-Germain in 2012.

In the years since, first Mario Balotelli and then Carlos Bacca did reasonable jobs of filling the void, with help from a continuously changing support cast featuring the likes of Stephan El Shaarawy, Jérémy Ménez and Suso. But nobody has truly convinced over a concerted period in the position.

Milan’s top scorer in 2016/17 was Bacca, though in truth his 13 goals in 32 league games was an underwhelming tally, a statistical portrait of a striker both ill at ease with the overarching system and style of play, and not always on good terms with the head coach, Vincenzo Montella.

While the Colombian showcased a clinical touch in and around the penalty box, his all-round play was disappointing. He didn’t show the power or aerial ability to act as an aerial outlet for direct balls or crosses, nor did he evidence the link-up play necessary to combine well with team-mates.

Milan, and Montella, require a striker who does more than just score to lead their front three in the coach’s favoured 4-3-3 system. And Dembélé might be able to provide what’s needed.

The 20-year-old is a strong, forceful centre-forward. Standing at 6ft, he is tall, an aerial threat, and comfortable operating with his back to goal. He is also able to receive passes to feet or chest, with sound control and composure in possession.

Dembélé also proved himself to be a capable team player during his time at Celtic, gaining nine assists in all competitions and convincing with his movement, tactical awareness and link-up ability. One criticism, however, would be that technically he remains raw, with his passing perhaps not as crisp as Montella may like.

Despite that one minor discrepancy, the prospect would be a good addition for Milan. And, at 20 years of age, he also possessed a sizeable upside.

Dembélé is less of a certainty than Belotti or Morata, but he would be a better fit than the strikers already available to the Rossoneri.