Chris Wood continued his stellar return from injury with a goal against former club West Bromwich Albion on Saturday to confirm Burnley’s 2-1 win over the now Alan Pardew-less Baggies. The Kiwi has now picked up four goals in his last three games for Sean Dyche’s side and shows no sign of slowing down.

The result was just the latest in a fantastic run of form that has seen Burnley continue to dumbfound critics and fans alike and maintain their position in seventh place among a host of bigger and richer clubs.

With ten points from their last five games, only Manchester City, Tottenham, Liverpool and Manchester United sit above the Clarets in the form table. And Wood’s goals and assists have played a huge part in that exquisite run.

Indeed, Burnley and Wood have enjoyed a symbiotic relationship that has seen both parties flourish where many would have thought unlikely. Wood now not only has ten goals to his name for the Turf Moor side this season but has ensured Dyche’s team haven’t lost a single league game in which he’s scored.

What’s more remarkable is the fact that very few predicted this from Wood. Signed from Leeds United in the summer to replace Andre Gray, many wondered whether the striker, who had done most of his best work in the Championship, would be able to fill the boots of the now-Watford striker who led the line for Burnley last season.

Although Gray has struggled for minutes and goals at Vicarage Road, netting just four times, he did well enough last term to earn an £18.5million switch to Watford.

Yet Wood has not only matched Gray’s record of ten goals for the season but is also playing considerably better than his predecessor this time around.

Like the position of their respective sides in the Premier League, Wood currently enjoys a sizeable advantage over his Watford counterpart with nine Premier League goals and has proved to be a notably better striker over the course of this current league campaign.

Wood is currently averaging 0.6 goals per 90. Not only is this double Gray’s 0.3 per game, but it is also notably more impressive than what Clarets team-mates Ashley Barnes (0.4) and Sam Vokes (0.3) currently average too. 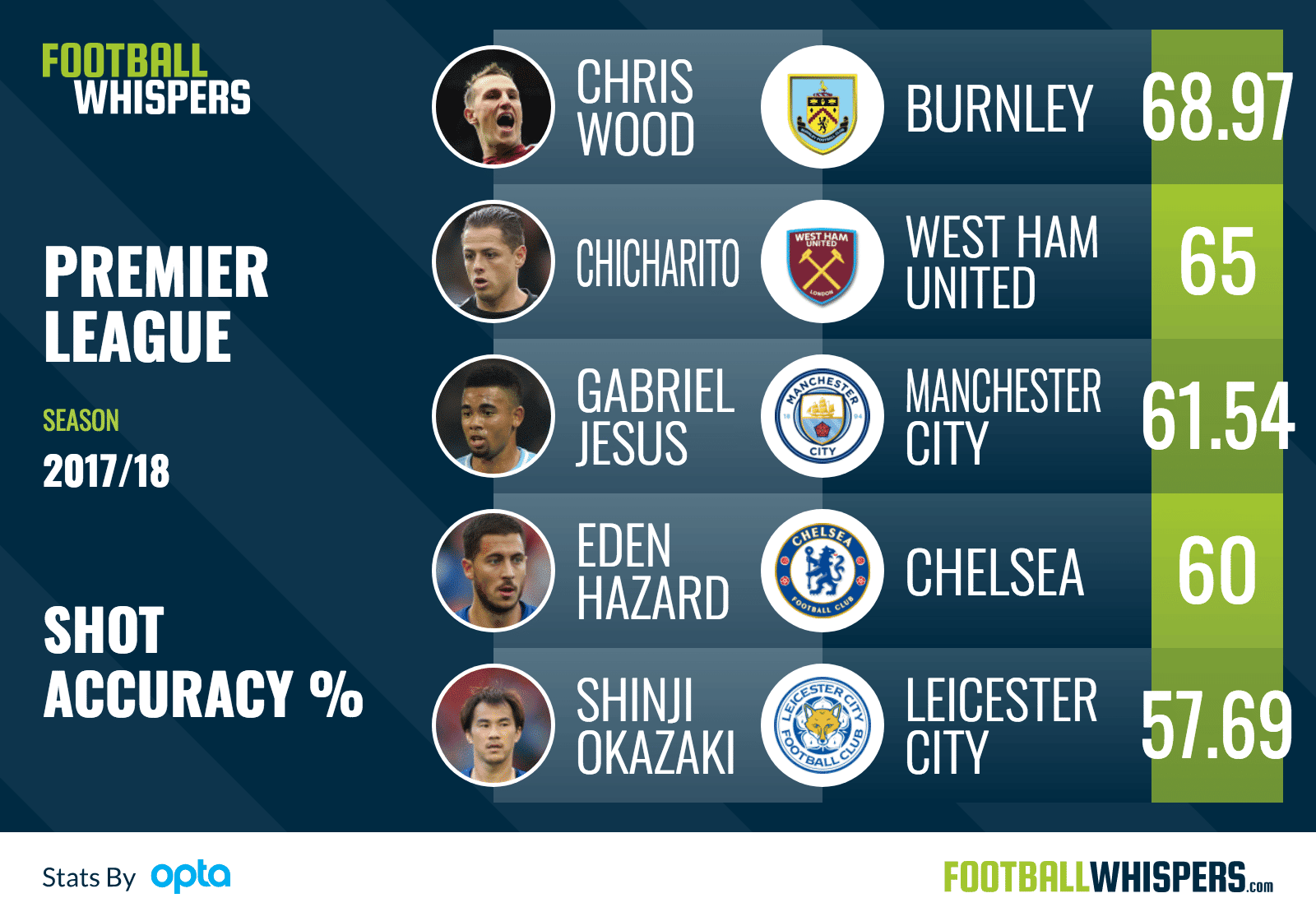 Perhaps even more remarkable is that although Wood averages a similar amount of shots per 90 (2.2) as the other three forwards, yet the percentage of shots he gets on target (1.4) is far greater Barnes, Vokes or Gray.

While Vokes and Gray both average around one third of their shots on target and Barnes sits a little higher on 38 percent, Wood blows all three out of the water with a remarkable 68.97 percent of his shots finding the target.

In fact, it’s not just among these forwards that Wood excels. Across the entire Premier League no player consistently gets more of their shots on target than Burnley’s in-form goalscorer.

Manchester City star Gabriel Jesus is second best with 61.54 per cent accuracy, while Eden Hazard (60 per cent) is third. However, Wood's average of 2.2 shots per 90 is some way shot of Harry Kane. The Tottenham striker leads the way for the Premier League with 5.35 per 90.

This incredible ability to find the net so regularly is undoubtedly the secret behind Wood’s success this season and of course a huge part in how successful he was in the Championship with Leeds in the previous campaign. Last season the New Zealand striker netted 30 times and supplied four assists in just 48 games as his side narrowly missed out on the chance of reaching the play-offs.

What’s even more interesting is that despite scoring so many goals for Leeds last season, Wood’s shot accuracy was only around 45 percent and nowhere near the top of the Championship’s most efficient goal-scorers. Normally that could be attributed to the number of shots he took per 90. But the figure was marginally lower than now at 2.12 across the season.

While many question a player’s ability to transfer success and certain skill sets from the Championship to the Premier League, Wood has not only continued his goal-scoring form but has actually improved when it comes to hitting the target despite making the step up after spending all but a handful of games of his career in the second tier.

To that end, Wood and Burnley deserve immense credit. Not only did Dyche and his backroom staff manage to cash in on their main goalscorer and bring in an even better replacement for half the price, but Wood has also proved his worth by not only matching his predecessor but going one step further by outperforming him each and every week.