On their books right now, Barça have three players signed for in excess of €100million, though Philippe Coutinho is currently on loan with FC Bayern. The point, however, remains; Barcelona have spent heavily over recent seasons.

If reports are accurate, that spending won’t be stopping anytime soon.

Next on the list for Ernesto Valverde's men is reportedly a replacement for Luis Suárez. The 32-year-old is still a handful but his form has taken a hit recently.

Originally, it was mooted that Griezmann would eventually lead the line for Los Cules. But reports in Spain claim Barcelona have drawn up an ambitious four-man shortlist to replace their No.9.

Mundo Deportivo insist Liverpool’s Roberto Firmino was looked at but didn’t make the cut. Though that could do with the deal the Premier League leaders have in place with Barcelona which sees a €100million premium added onto any player they want to take to LaLiga.

The Spanish media outlet claim Marcus Rashford, along with compatriot Harry Kane, tops the wishlist, though it also contains Lautaro Martínez and a certain Kylian Mbappé.

Replacing the maverick Uruguay international will be no easy feat. Since his arrival in Spain, he's scored 135 goals in 169 LaLiga appearances. His debut campaign, the 2014/15 season, is the only time he's failed to surpass the 20-goal barrier in the Spanish top flight.

Not only is he a prolific forward, he's the ideal foil for Lionel Messi. Unlike many centre-forwards in world football, Suárez isn't selfish. Though the currency he deals in is goals, he's more than happy to create opportunities for others at the expense of chances for himself.

He's a more potent version of Firmino. This makes him more unique than people give him credit for. Finding someone to do what he does, both with and without the ball, is perhaps the most difficult task in world football right now. 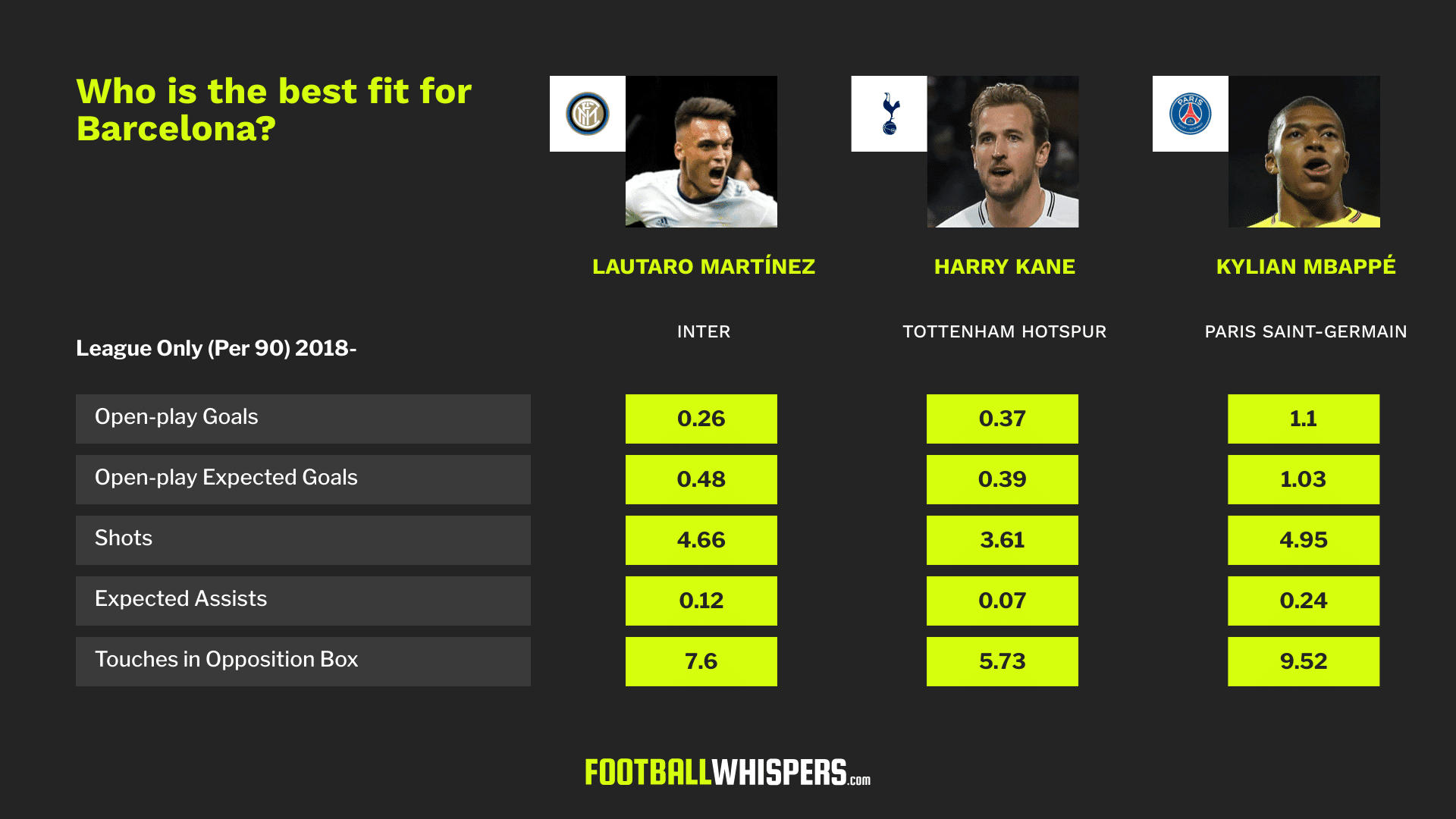 Though Mbappé is arguably the most exciting talent in Europe, it doesn't mean he's the man to fill Suárez's boots. He's by far the most prolific, as highlighted in the graphic above, and he's a fiend when it comes to getting into high-quality goalscoring positions. However, the quality of the opposition needs to be taken into account. As does the team he's turning out for.

Similarly with Kane. The Spurs man is a goalscorer who relies on volume to be at his very best. He isn't going to get the same opportunities at Barcelona, not with Messi also being a bit of a volume monster.

Of the four players mentioned, Martínez is perhaps the closest player to Suarez in terms of playing style. So why is Rashford the preferred option? 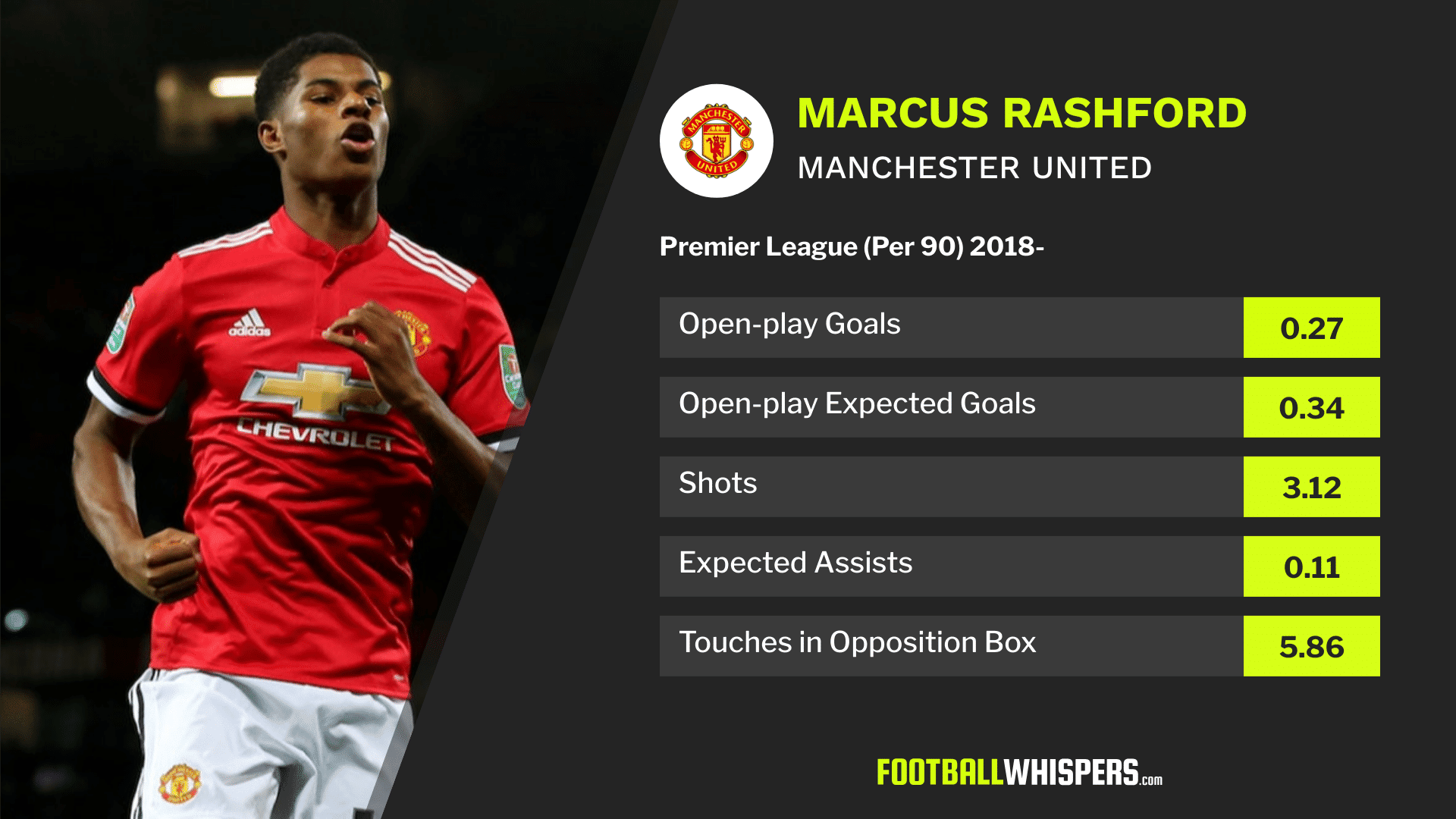 It might well be down to the 21-year-old's versatility. During his time with Manchester United, he's flip-flopped between the left-winger and centre-forward positions. When deployed centrally, he naturally drifts to the left. When used as a wide-forward, he makes incisive runs into the penalty area.

At times, playing in attack for Barcelona is like playing in a two-man attack. It's something Rashford has experience in at Old Trafford having been used alongside Romelu Lukaku. He knows how to make space for others and he's comfortable dropping into wide areas, too.

While his numbers might not be great, his main role wouldn't be as a goalscorer but as a facilitator. Furthermore, his goal output would likely spike playing in a dominant Barça side, just as Suárez's did.

It may seem far-fetched when he's up against some of the best forwards in the world, but Rashford could be a good choice for Barcelona.