Who Really Has The Best Defence In The Premier League?

Johan Cruyff once posited that a team can win the league either by scoring 50 goals and conceding 20, or scoring 80 and letting in 50. It's a theory that bisects the age-old debate of whether solid defensive foundations are the best route to success, or whether it's better to bank on a powerful attack that can outscore any opponent.

With an average of 2.91 goals per game so far this term, Manchester City, under the tutelage of Cruyff disciple Pep Guardiola, are romping their way to the Premier League title through ruthless attacking play. But, despite individual criticism of some of their defensive stars, they are also proving difficult to score against, conceding only 18 goals in 21 games.

Rivals Manchester United, however, whose manager José Mourinho subscribes to a much more pragmatic philosophy than his Catalan adversary, have conceded just 16 times – the joint fewest alongside champions Chelsea.

But does this mean United or Chelsea have the Premier League's best defences? Of course, the aim of defending is to limit the amount of goals conceded, but the figure in the ‘against' column of the league table is not necessarily the strongest indicator of the sternest defensive unit.

Football, by its nature, is a low-scoring game. And, as such, studying the amount of goals scored or conceded over relatively short periods of time offers only a limited pool of data. To get a clearer picture of complex processes such a the art of defending and all that it entails, a look below the surface is needed.

As we see every week, luck plays a big role in deciding football games, most notably in goal-scoring situations; a sliced shot from an out-of-form attacker, or a slip at a crucial moment, can mean a team keeps a clean sheet by no doing of their own. Likewise, an unfortunate ricochet or an unexpected bobble over a divot in the turf can undo the most strictly-drilled defensive structure.

By looking at the underlying numbers, though, we can eradicate the influence of such happenstances to some degree. By studying the amount of shots a team allows their opponents to muster, we can see whose goalkeepers are doing more than their fair share of work; and by looking at a side's non-penalty expected goals against (NPxGA), a metric which applies a value to each shot conceded – excluding penalties and own goals – based on historical data, we can see broadly which teams are giving up a disproportionately high quality and/or quantity of opportunities.

When it comes to shots allowed per game this season, Manchester City are the Premier League's highest performers with just 6.7 – no surprise given Guardiola's side also dominate the ball more than any other side, averaging a 66.4 per cent share of possession. Liverpool, who have conceded 29 goals to date this term, almost double the figure of United and Chelsea, are next best, allowing only 7.7 shots at goal on average. 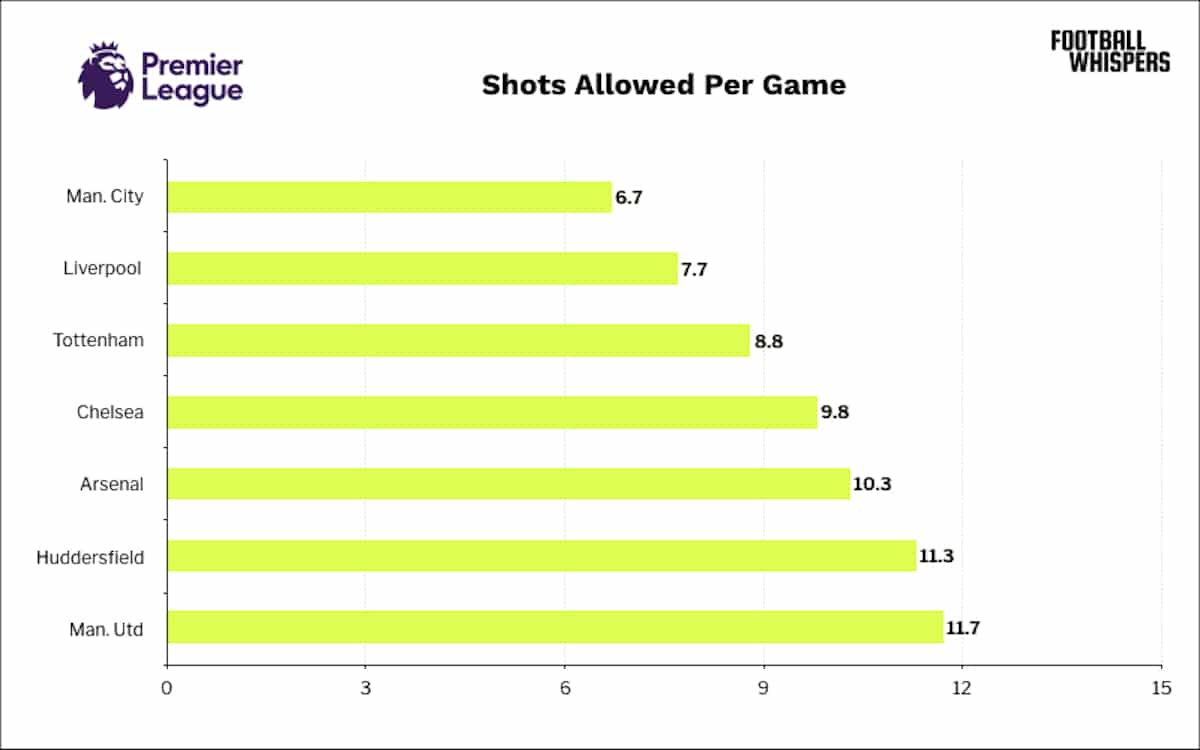 Tottenham Hotspur (8.8) and Chelsea (9.8) rank third and fourth respectively, while Mourinho's men are down in seventh with 11.7, behind newly-promoted Huddersfield Town (11.3).

Burnley, whose 21 goals conceded is the fourth-best defensive record in the league, have given up more shots per game (16) than any other team.

Shots allowed is, however, a flawed metric as it gives equal credence to every effort. Therefore, a side like Burnley, whose defensive strategy is to force opponents to shoot from unfavourable angles, rather than prevent them shooting altogether, figure lower than you might expect.

NPxGA, though, paints a clearer picture of a team's defensive efforts. And, again, City come out on top, with an NPxGA for the season so far of just 16.04. This means, broadly speaking, they have performed even better than their defensive record of 18 goals conceded would illustrate. 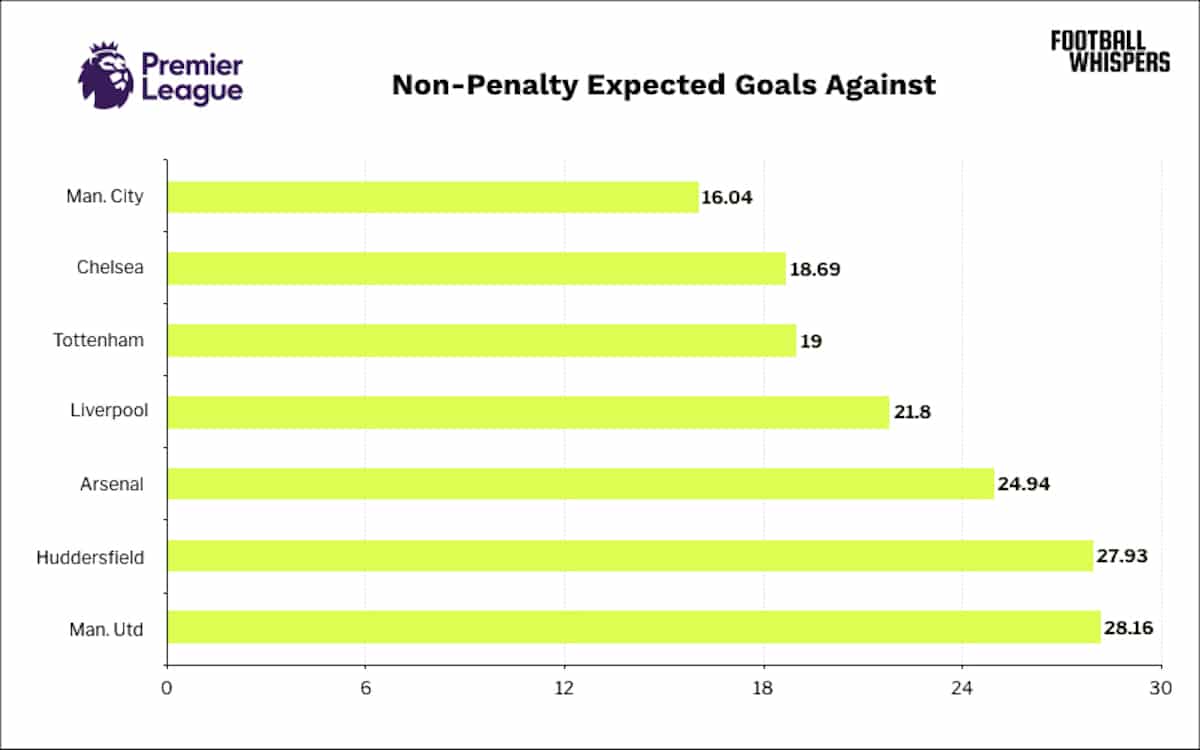 Chelsea (18.69) rank second in this regard, showing that their defensive record this year is largely merited. Spurs (19) are again third and Liverpool (21.8) fourth.

Once again, United figure lower than expected, down in seventh with an NPxGA of 28.16, below West Bromwich Albion (27.93). Where City might have expected to concede fewer than their 18 goals this season, United's NPxGA shows they have been fortunate not to have shipped a good deal more than their 16.

Much of this can be attributed to the fact United are able to rely on the gifts of David de Gea, arguably the best shot-stopping goalkeeper in the world, who is, of course, a part of their defensive unit, and who is therefore undervalued by this metric.

But the 12.16 discrepancy between United's NPxGA and their actual goals conceded is by far the biggest in the Premier League – Burnley are second with 11.78, with a huge drop-off then to Chelsea (2.49). Even considering the fact the Red Devils boast one of the finest keepers in world football, their propensity for giving up high-quality chances is not indicative of a great defensive side and, over time, is unlikely to be sustainable.

As these statistics show, while they may not have the best individual defenders, City are proving that attack – or, more accurately, keeping the ball – can be the best form of defence.